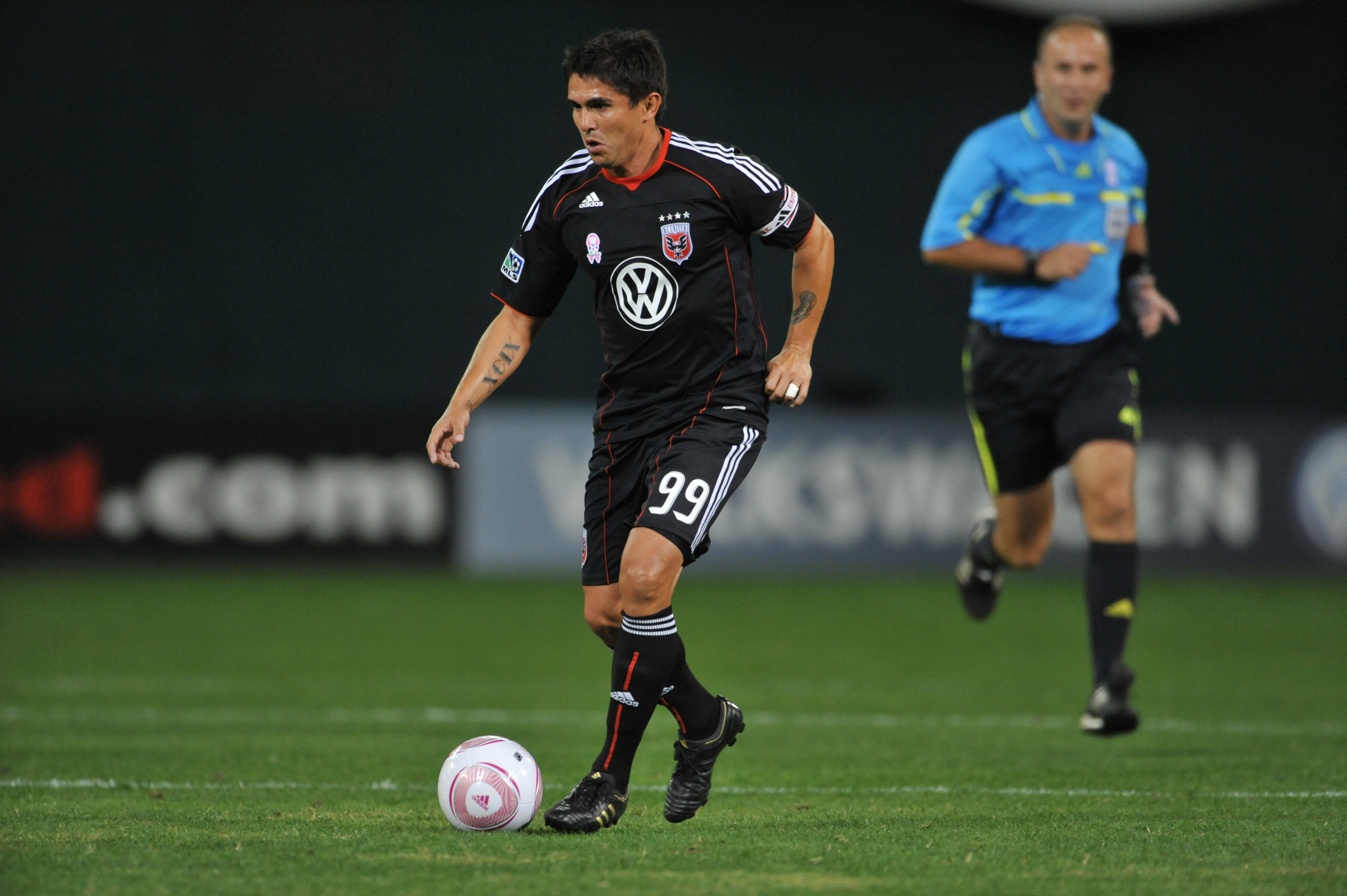 These are just a few names when talking about some of the best-known players in Major League Soccer in the past few years.

But who are the top 25 players to have ever competed in this league? Bleacher Report investigates.

NOTE: Records are as of this publishing date. 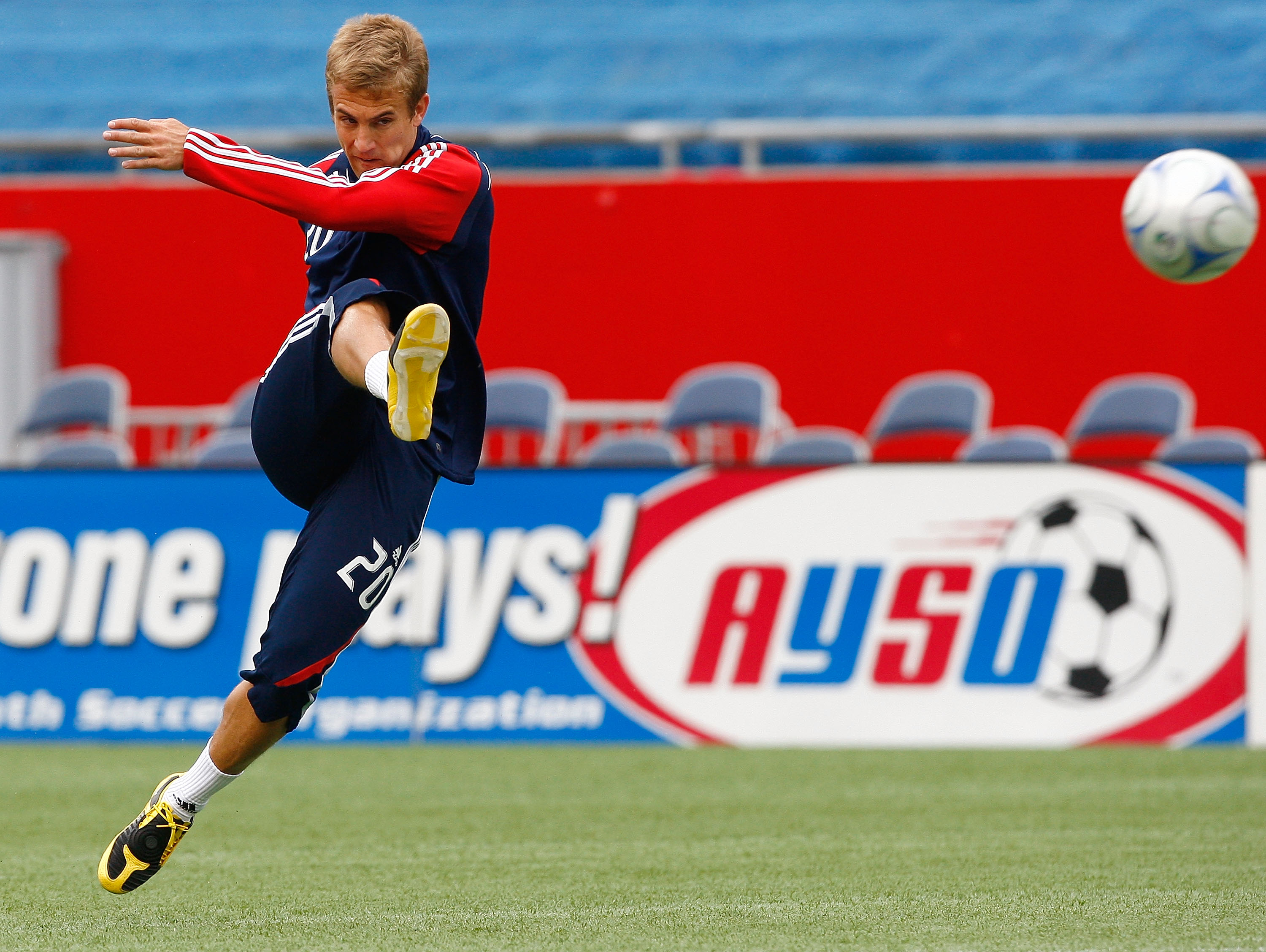 Though his career in MLS has been hampered by head injuries, New England Revolution forward Taylor Twellman has been known for his scoring prowess.

In nine seasons with the Revs, Twellman scored 101 goals in 174 appearances.

His 101 goals are good for sixth-best all-time while his ten playoff goals put him tied for sixth all-time. 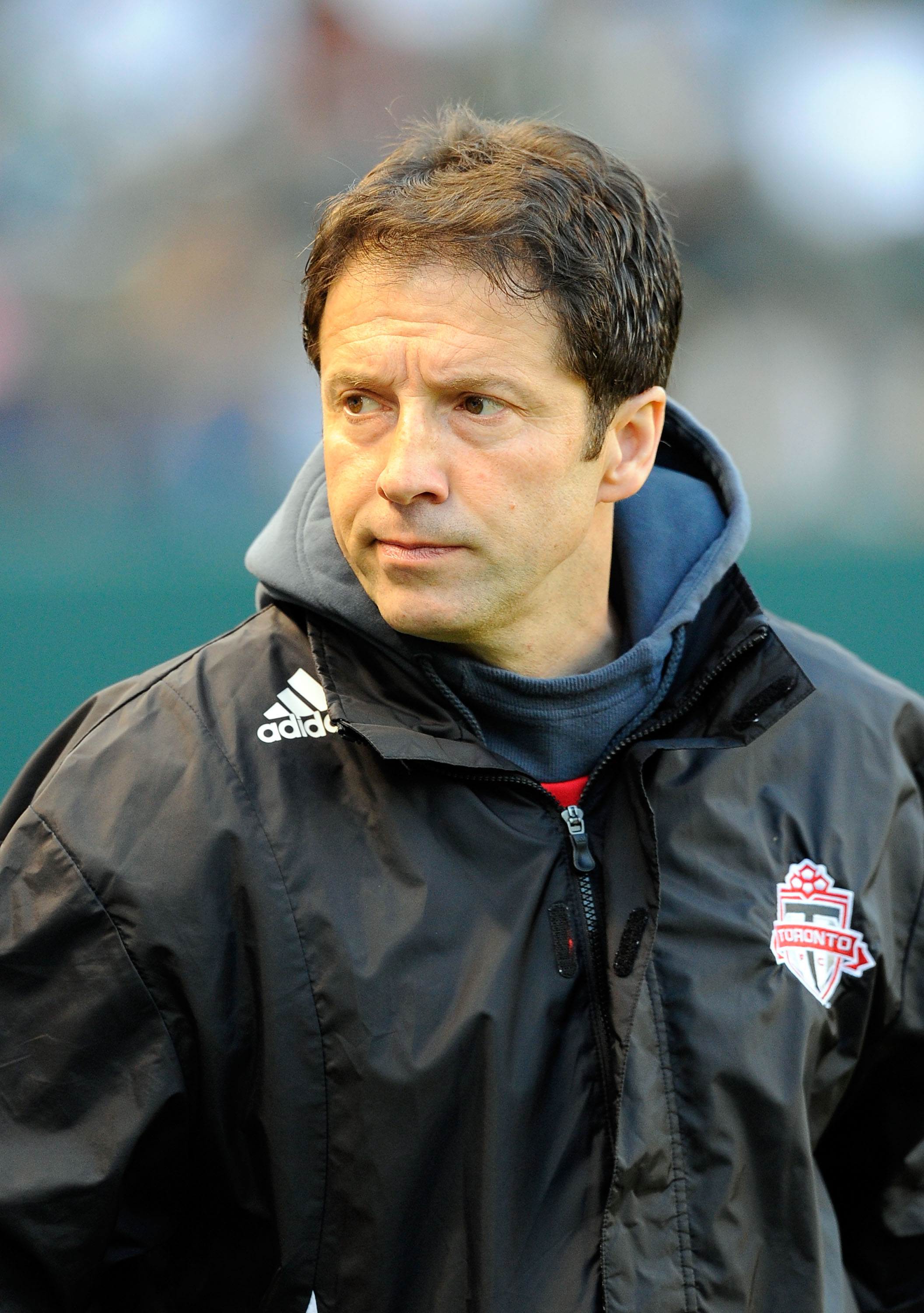 Predrag Radosavljevic, known to the masses as Preki, was one of the original players for Sporting Kansas City (formerly the Kansas City Wizards).

In his two stints with Kansas City, Preki scored 71 goals in 218 appearances. He also spent one season with the Miami Fusion, scoring eight goals in 24 appearances.

After retiring as a player, he was a manager for Chivas USA from 2007-09 and Toronto FC in 2010, where he led the Reds to the Canadian Championship. 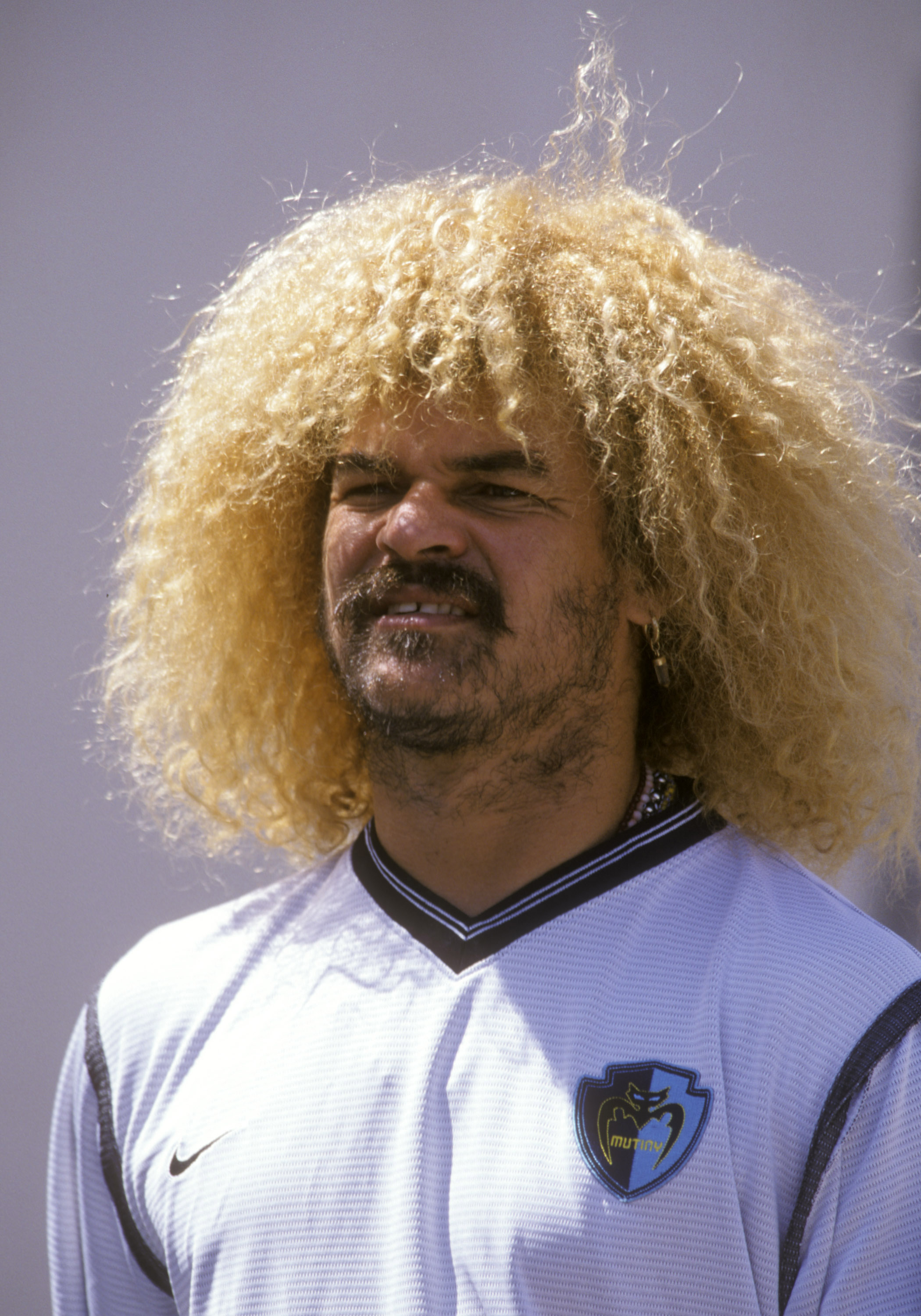 It's all about the hair.

Before there was Juan Pablo Angel, there was this man: Carlos "El Pibe" Valderrama, who spent time as a member of the Tampa Bay Mutiny, Miami Fusion and Colorado Rapids.

Known for his prowess as a provider and a playmaker, Valderrama made 175 appearances for his three clubs. Valderrama is also the most-capped player in Colombian history, appearing in 111 international matches. 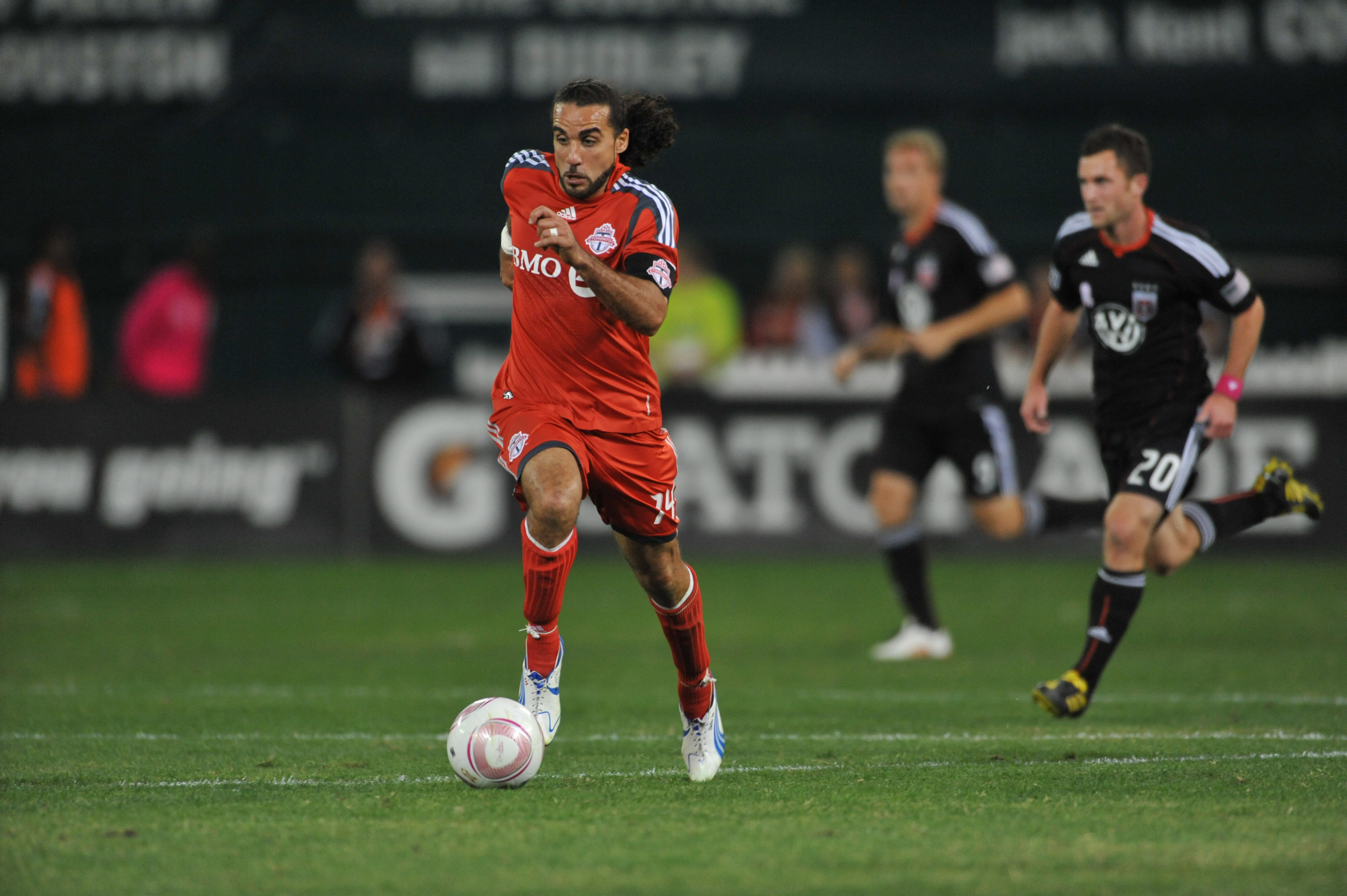 He spent time with the San Jose Earthquakes and the Houston Dynamo, winning two MLS Cups each while also winning a Supporters' Shield with the Quakes.

Returning home as a member of TFC, De Rosario led the Reds to the Canadian Championship in 2009 and 2010. 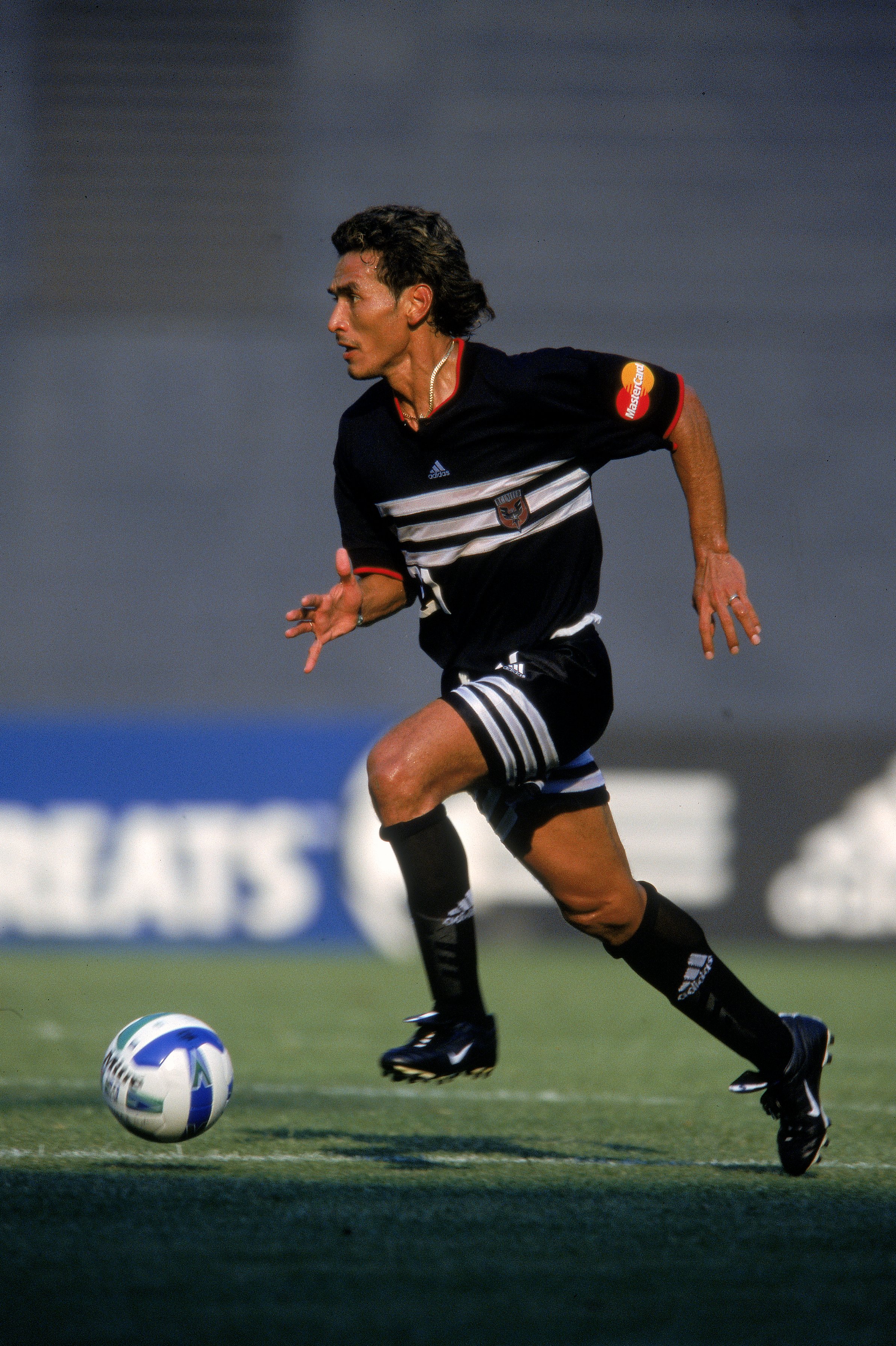 A Salvadoran that made his mark on the league was forward Raul Diaz Arce.

Diaz Arce was an important part of D.C. United's two MLS Cup-winning seasons in 1996 and 1997. He also had stints with the New England Revolution, the San Jose Clash, the defunct Tampa Bay Mutiny, and the Colorado Rapids while having one final stint with United in 2000-01. 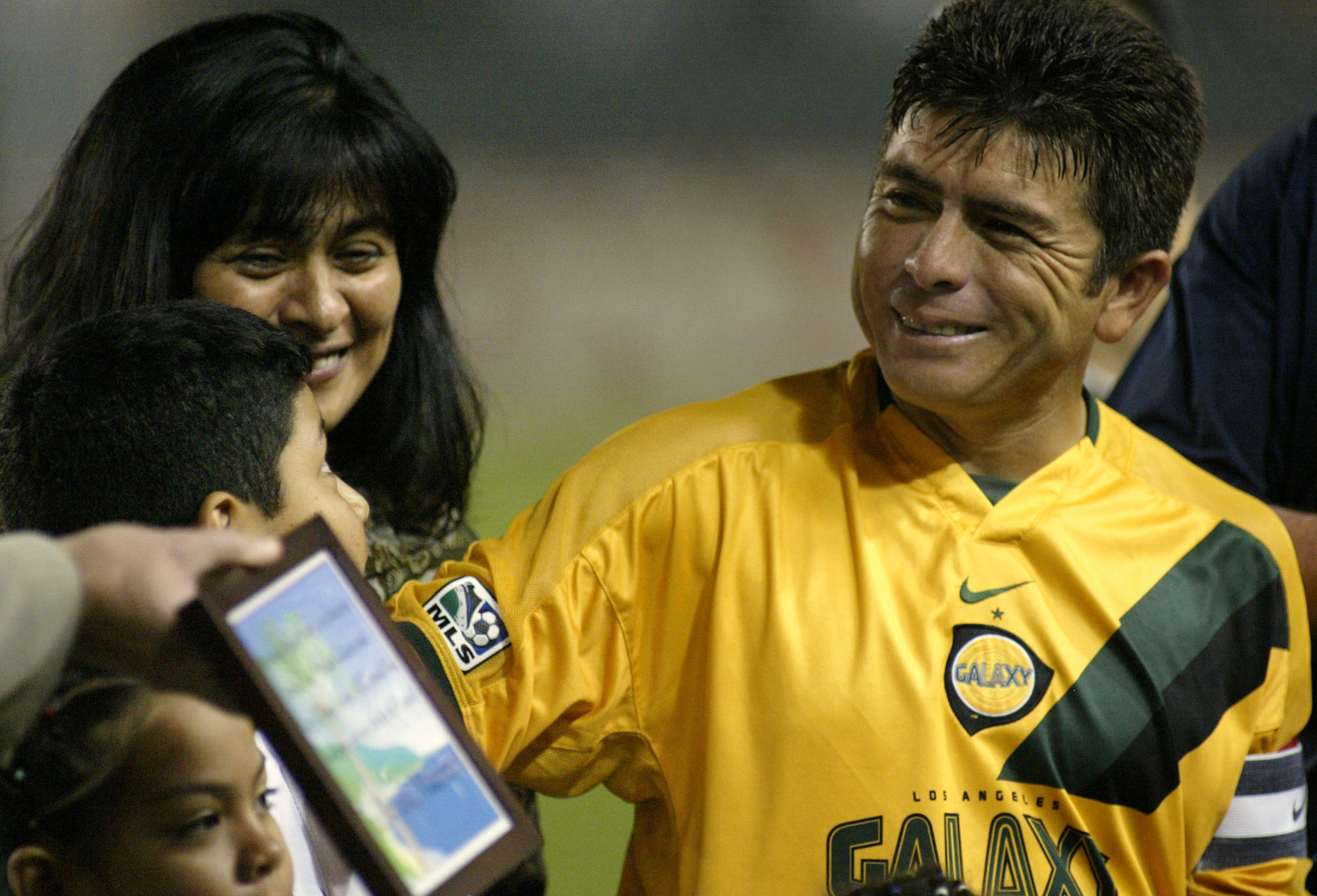 Checking in at #20 on our list is Mauricio Cienfuegos, one of the finest attacking midfielders during the early years of the league.

After playing for six different clubs in Central America and Mexico, including Santo Laguna and El Salvador's Luis Angel Firpo, Cienfuegos played eight seasons for the Los Angeles Galaxy, scoring 35 goals and 78 assists in 206 appearances for the G's.

Cienfuegos is currently tied for seventh all-time in playoff games played with 35. 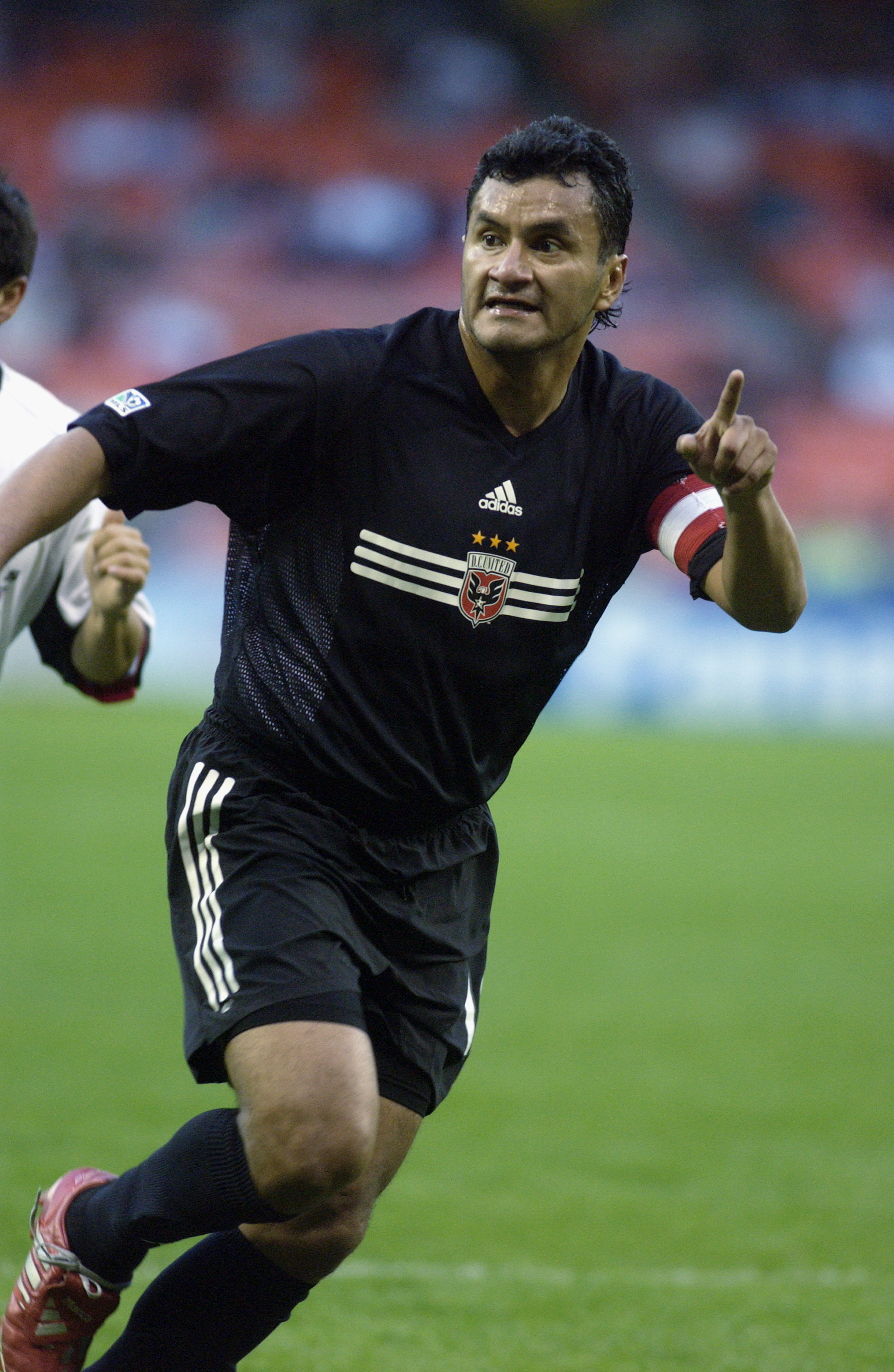 Mention D.C. United, and you have to mention this man: midfielder Marco Etcheverry.

In eight seasons with D.C. United, Etcheverry scored 34 goals in 190 appearances while leading D.C. to three MLS Cups, a U.S. Open Cup in 1996 and both a CONCACAF Champions Cup and a Copa Interamericana in 1998.

One of Bolivia's finest footballers, Etcheverry is a recipient of the country's Medal of Merit for his acheivements in sport. 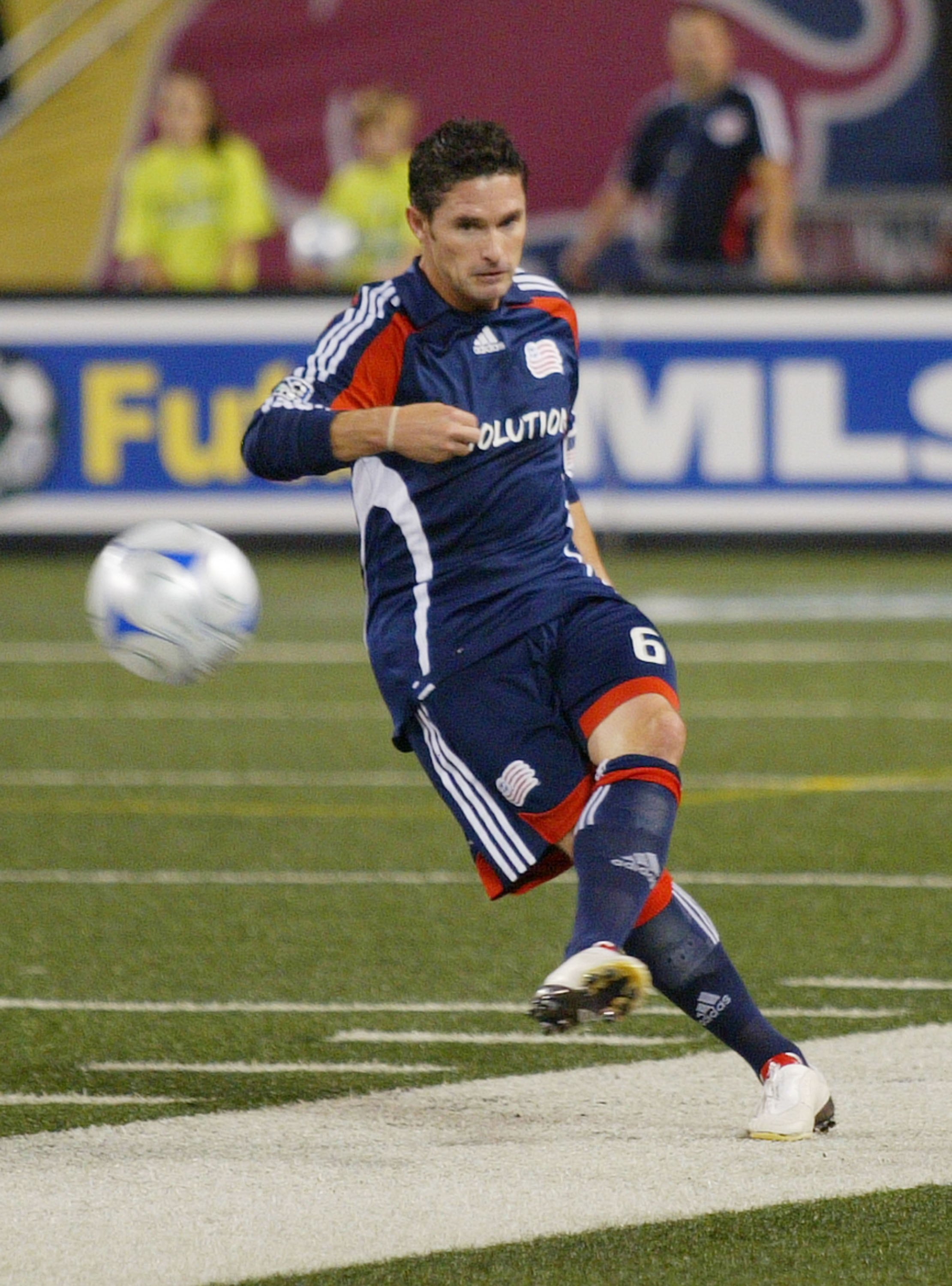 The New England Revolution have been on the short end of the MLS Cup, more times than they would have want happened.

However, one of the brighter spots from the 'Buffalo Bills of Major League Soccer' is defender Jay Heaps.

Heaps did lead New England to a U.S. Open Cup in 2007 and a North American SuperLiga crown in 2008.
Overall, Jay Heaps scored 17 goals in 316 league appearances. 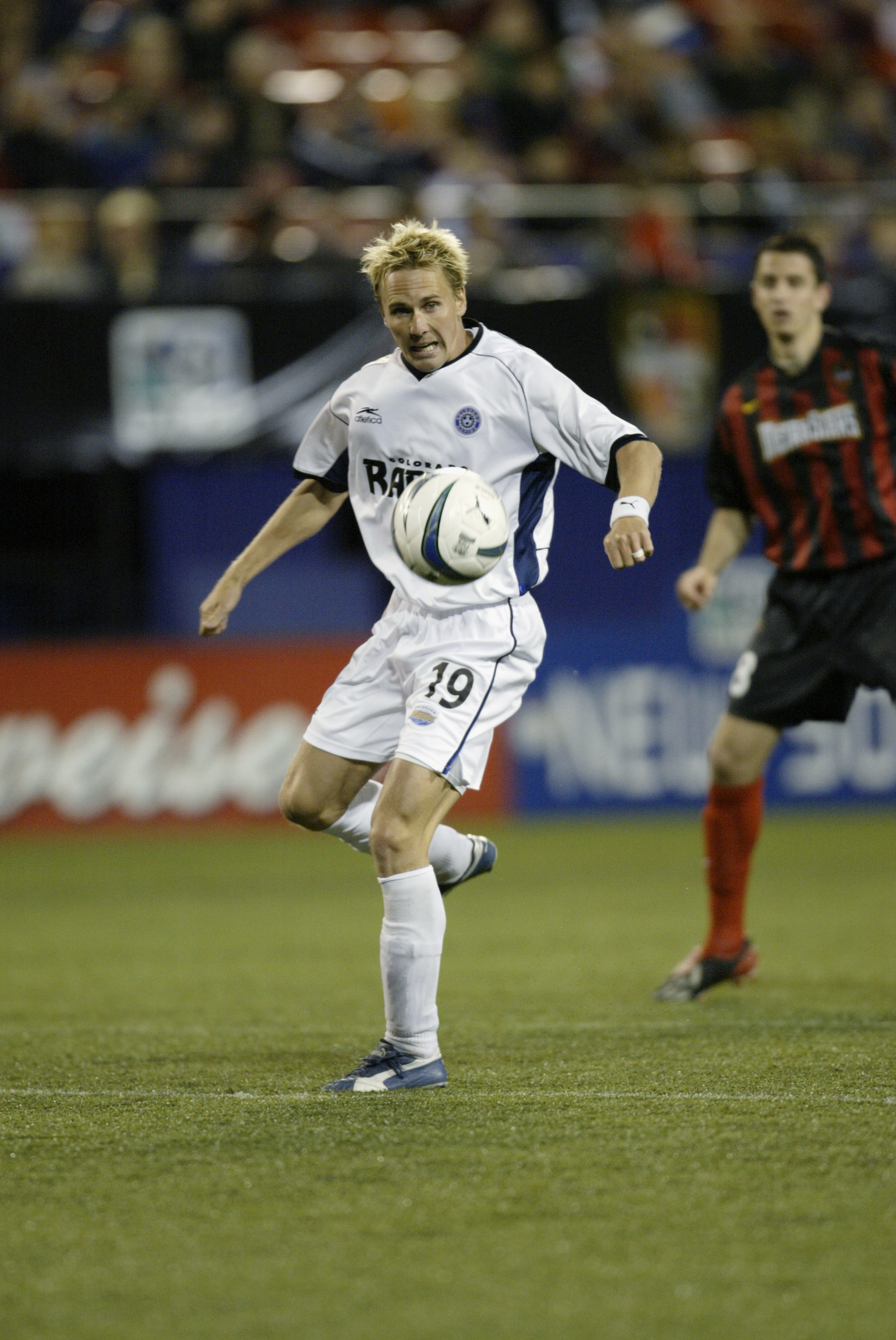 Alongside Marcelo Balboa, midfielder Chris Henderson is one of the Colorado Rapids' greatest players.

In his two stints with the Rapids, Henderson scored 53 assists and 31 goals in 178 apperances for Colorado. He also helped lead the Fusion to the MLS Supporters Shield in 2001.

Henderson also has stints with Sporting Kansas City, the Columbus Crew and the New York Red Bulls.
All in all, Henderson scored 51 goals in 317 appearances for five different MLS clubs, the latter good for seventh-best overall. He also recorded 26,242 minutes, which is good for fifth-best overall.

A native of Edmonds, Washington, Henderson is currently the technical director for the Seattle Sounders. 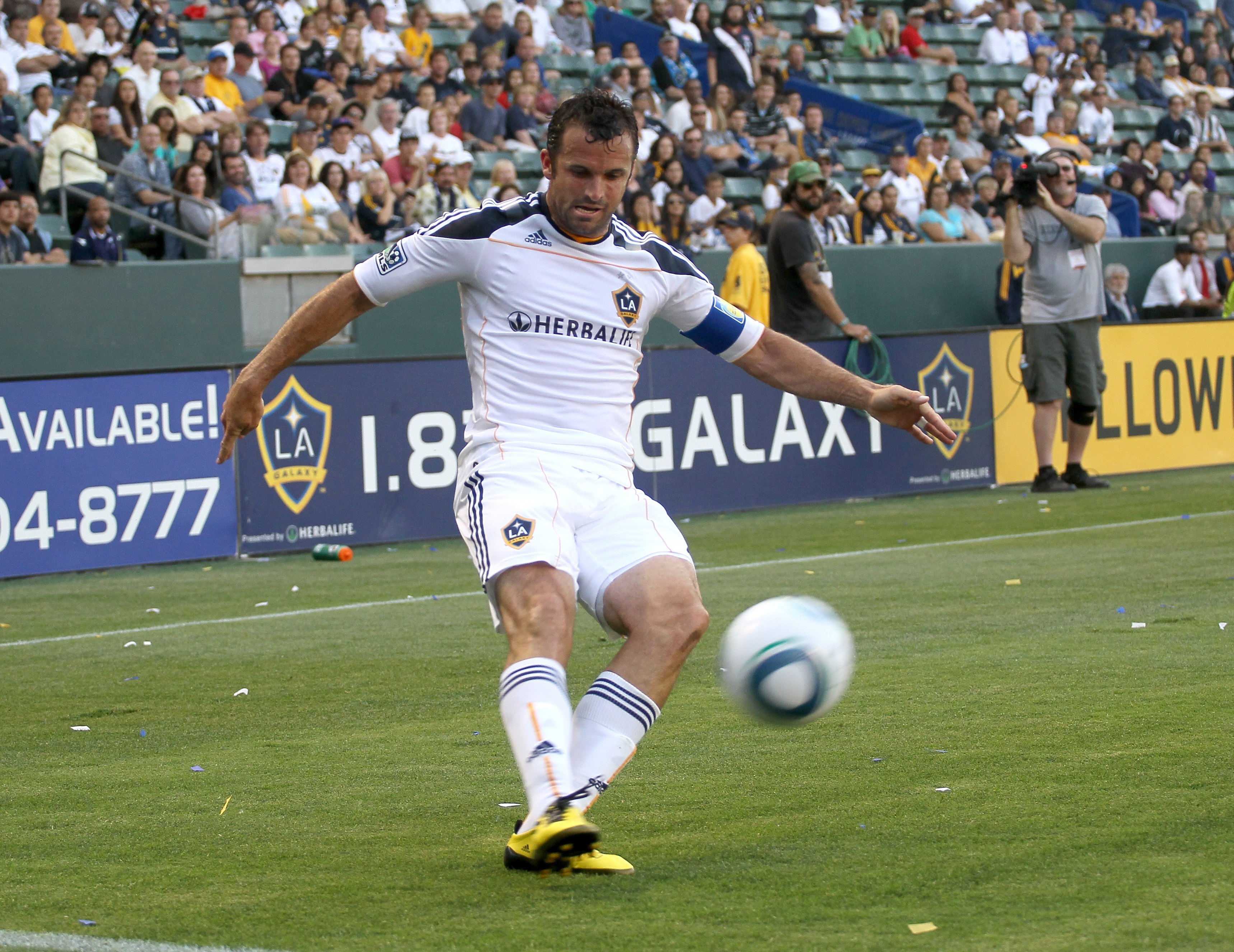 Versatility over a long period of time can get you places. Right back/midfielder Chris Klein is an example of this.

Klein spent a good deal of his career as a member of Sporting Kansas City, scoring 39 goals in 200 appearances. He helped lead Sporting to an MLS Cup and Supporters Shield in 2000 and a U.S. Open Cup in 2004.

Klein continues his work in MLS as the Senior Director of the LA Galaxy Youth Academy & Special Projects. 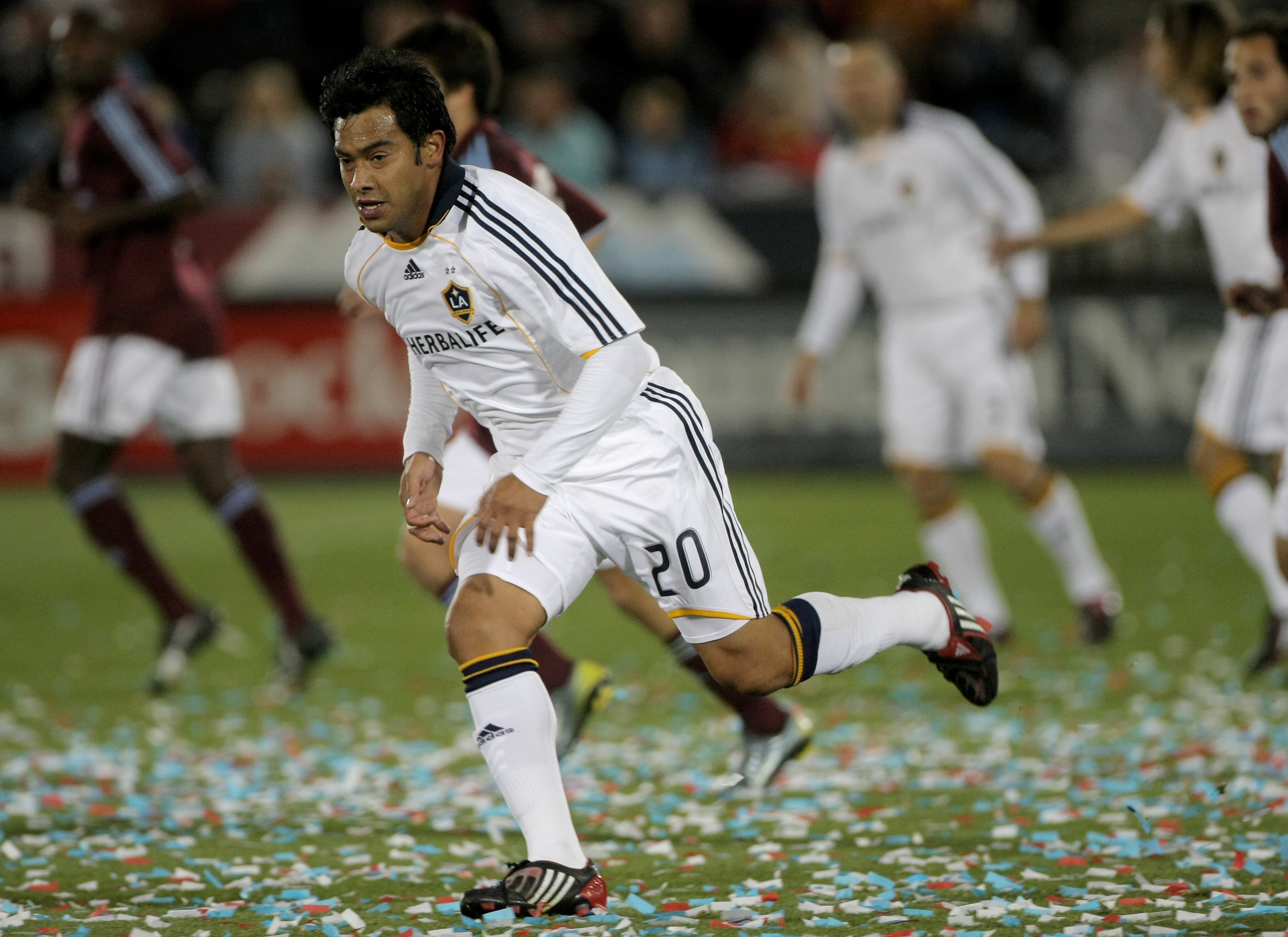 Perhaps the greatest MLS player to come out of Guatemala is "El Pescadito", forward Carlos Ruiz.

Ruiz spent eight seasons with three different clubs from 2002-2008, the most notable being the Los Angeles Galaxy.

2002 was Ruiz's finest year, as he helped lead the Galaxy to an MLS Supporters Shield and the MLS Cup, scoring a golden goal in extra time.

Ruiz also played for FC Dallas and Toronto FC. Overall, he made 164 league appearances. Ruiz's 82 regular season goals are tied for ninth-best all time, while his 16 playoff goals is second-best all-time. 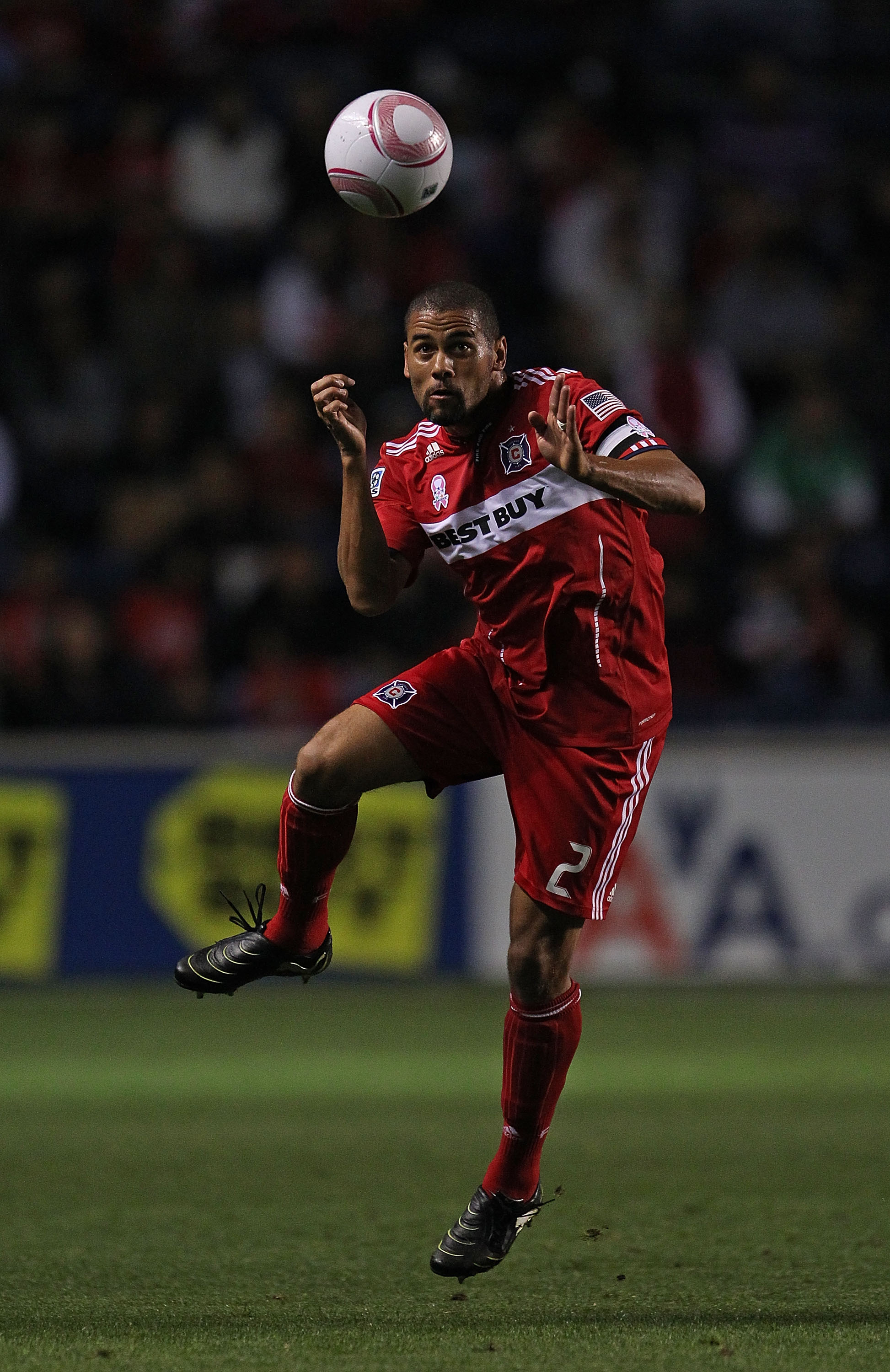 Center back C.J. Brown is one of the Chicago Fire's most recognized players.

A tall, imposing presence at 6-foot-1, Brown was one of the original Fire players from their inaugural season. He made 286 appearances for the Fire, dispossessing opposing attacks with skill and tenacity.

Today, Brown is an assistant manager to Jason Kreis and Real Salt Lake. 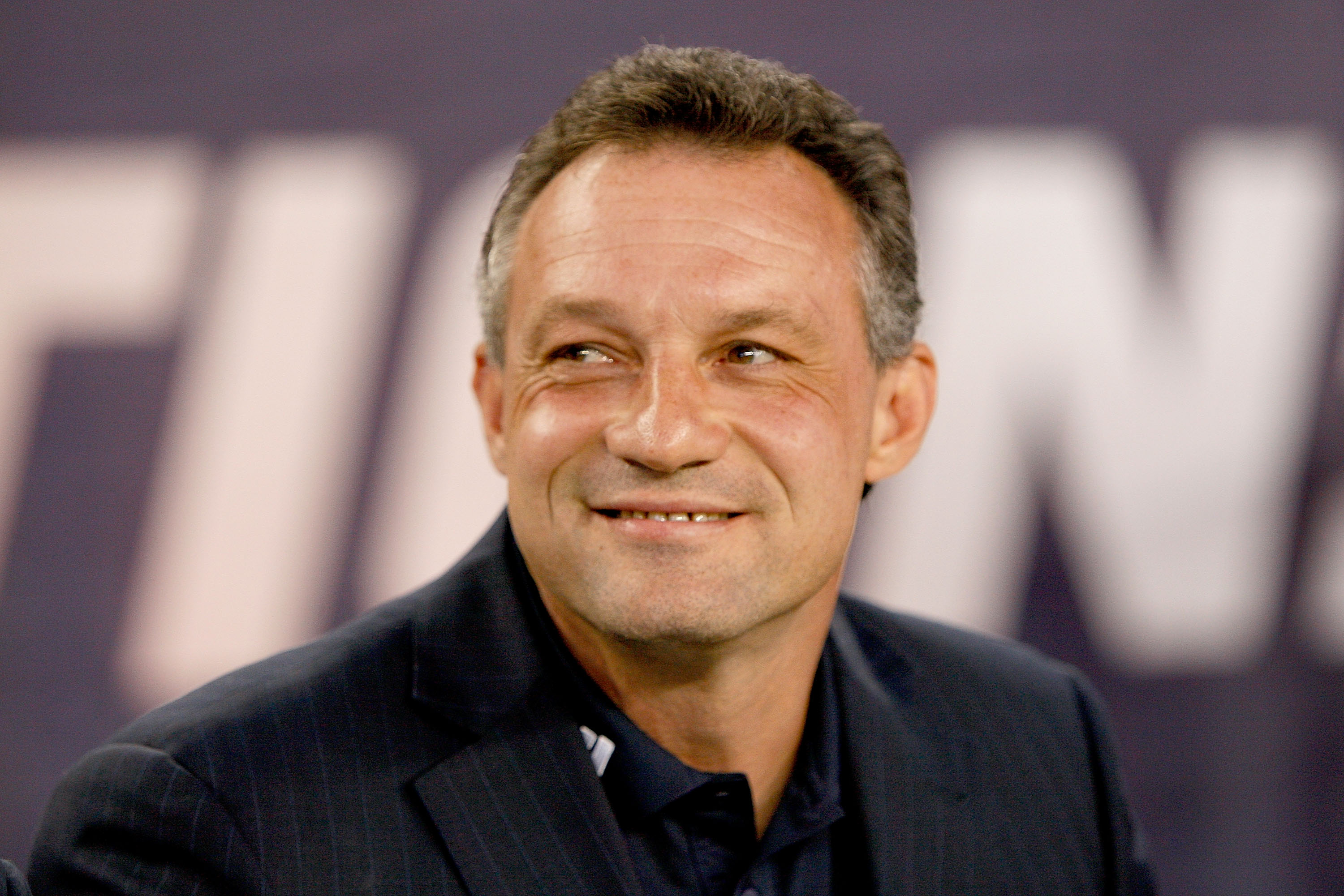 Former Chicago Fire midfielder and current Philadelphia Union manager Piotr Nowak was one of the key components of the Fire's early success. 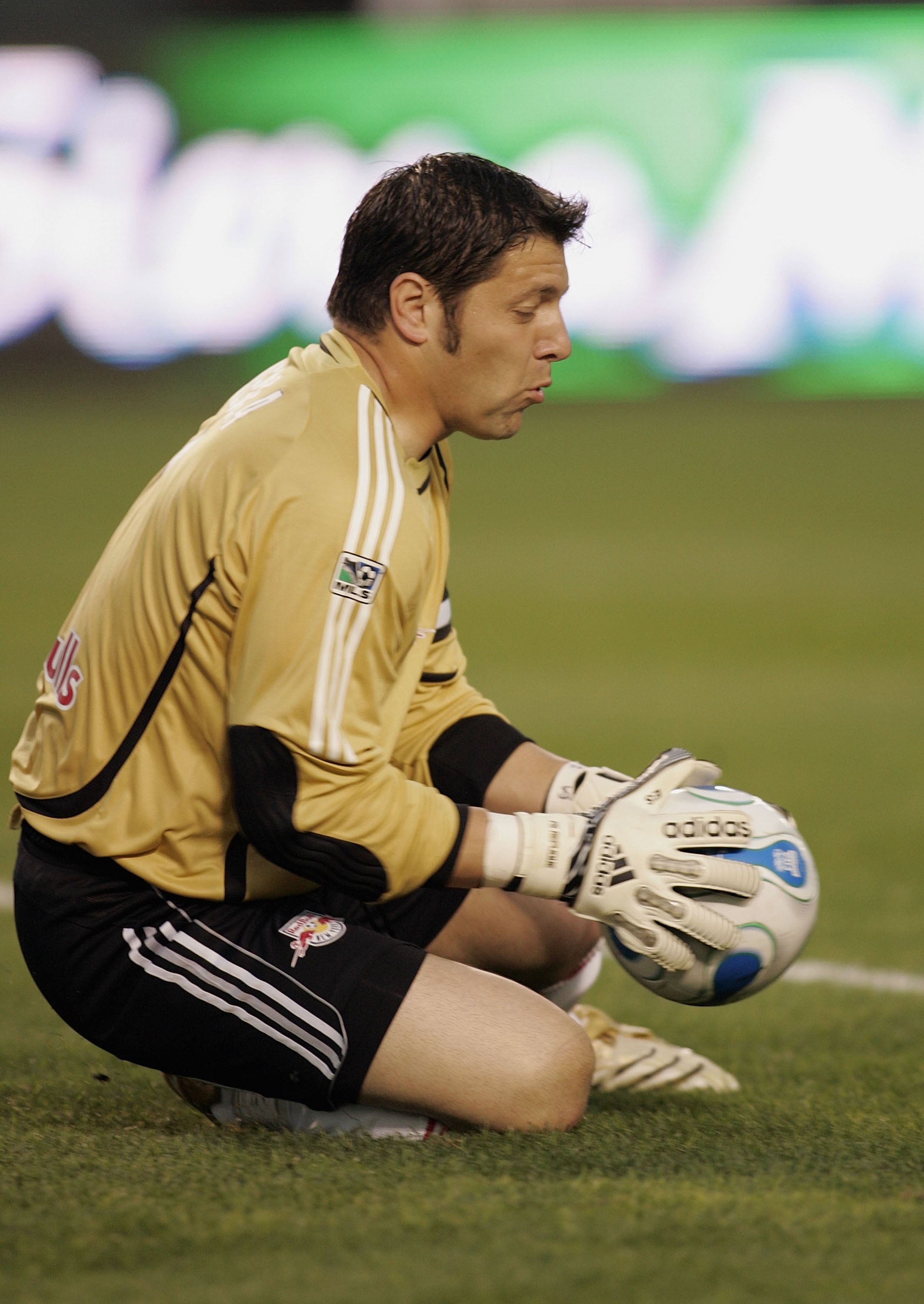 Goalkeeper Tony Meola is a goalkeeper that fans in New York and Kansas City are pretty familiar with. 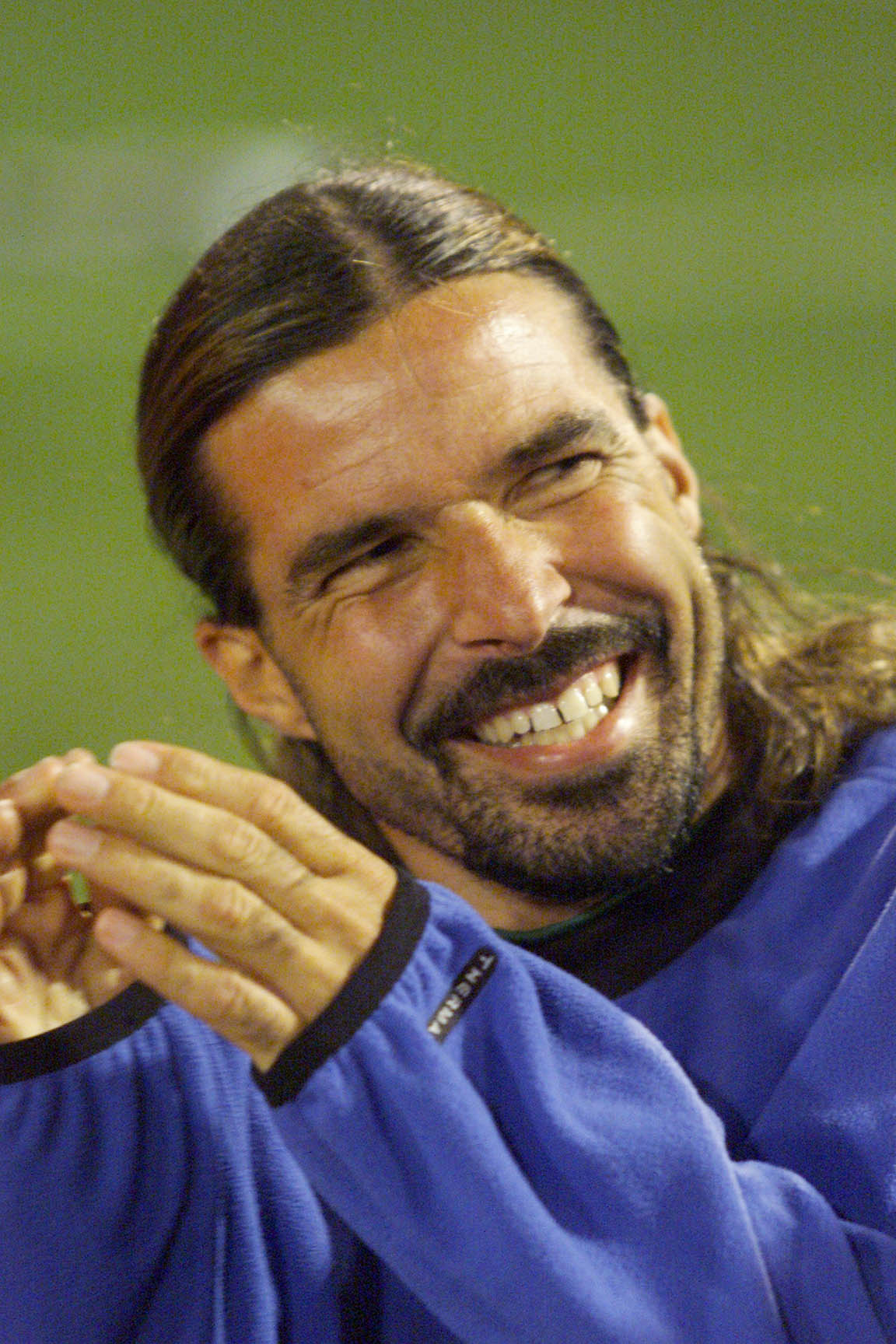 Currently, Balboa is a soccer commentator for ESPN, ABC, HDNet and Altitude. 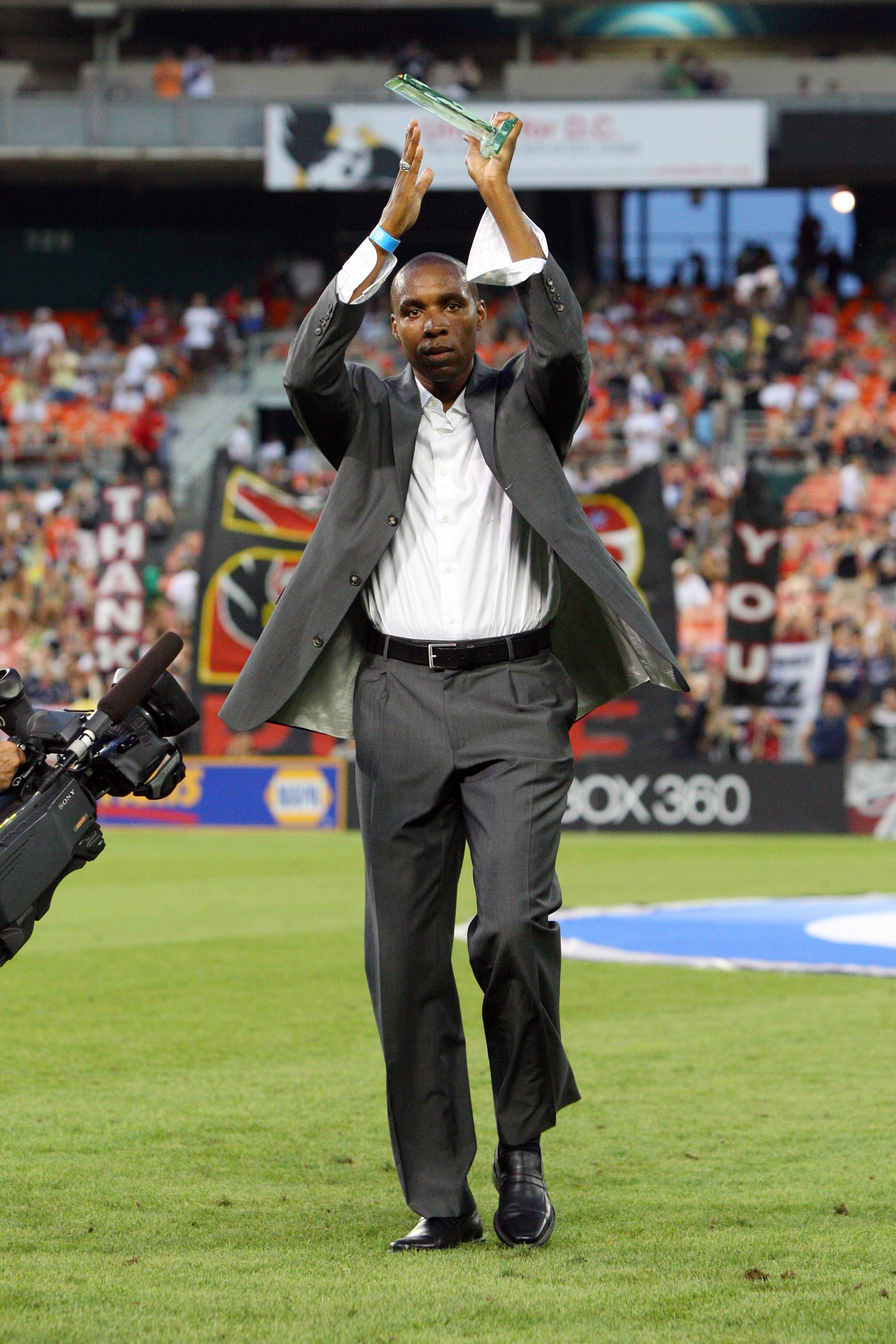 Defender Eddie Pope comes in at #10 on this list.

Pope spent 14 seasons with three different clubs, the most notable being D.C. United. From 1996-2002, Pope recorded eight goals in 143 appearances for D.C.

From 2003-04, Pope played with the New York Red Bulls, making 42 appearances. He closed out his career as a member of Real Salt Lake, making 69 appearances in the back line. 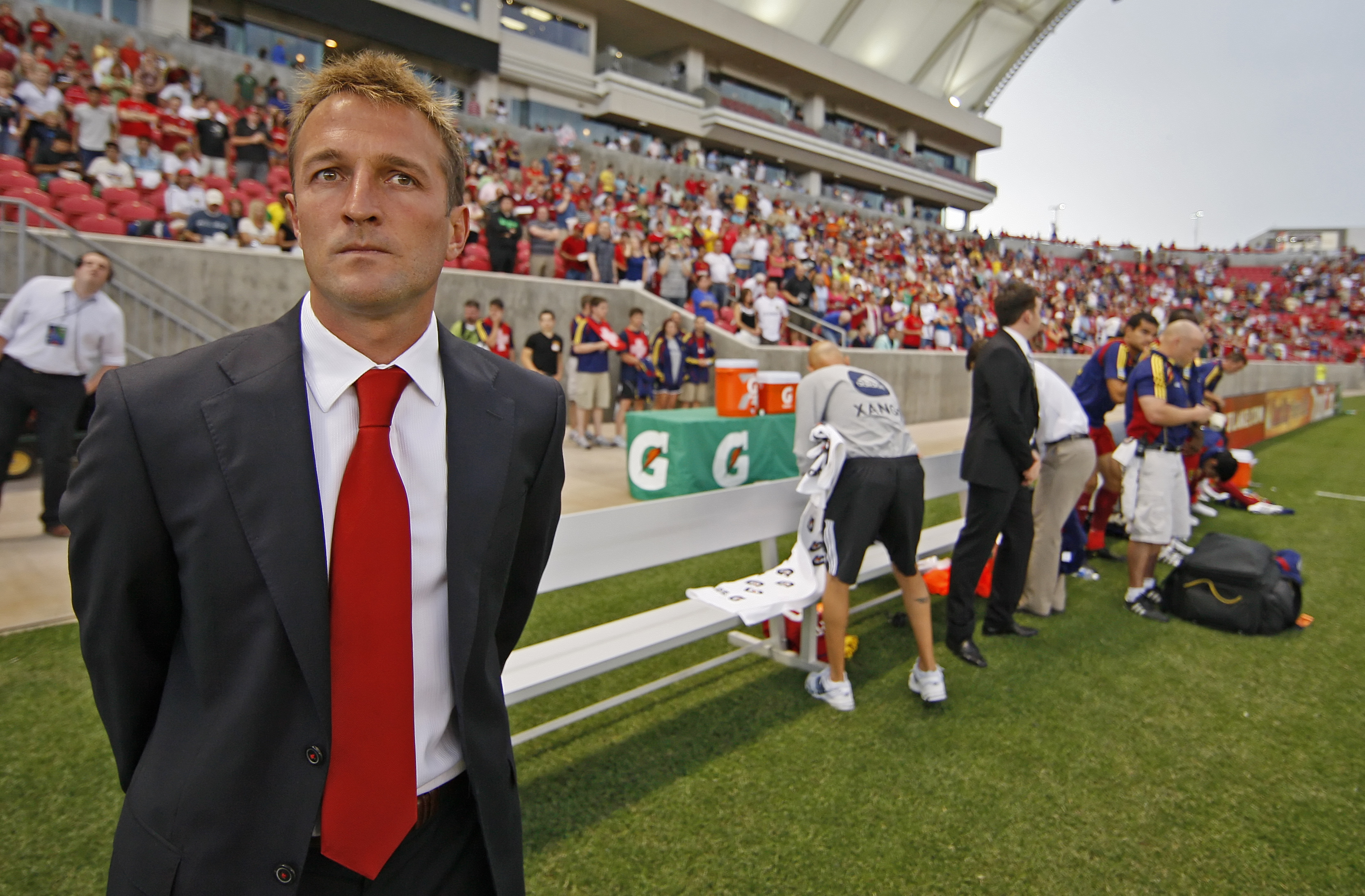 Current Real Salt Lake manager Jason Kreis was not too dang shabby himself as a player. His 108 regular season goals are good for fourth-best all-time.

Kreis spent a good deal of his playing career as one of FC Dallas's finest. As a member of FCD (formerly the Dallas Burn), Kreis scored 91 goals in 247 appearances.

After spending 11 seasons with FCD, Kreis was traded to RSL, where he added 17 goals in 58 appearances before taking the reins as manager. Kreis is the youngest manager to have ever won an MLS Cup. 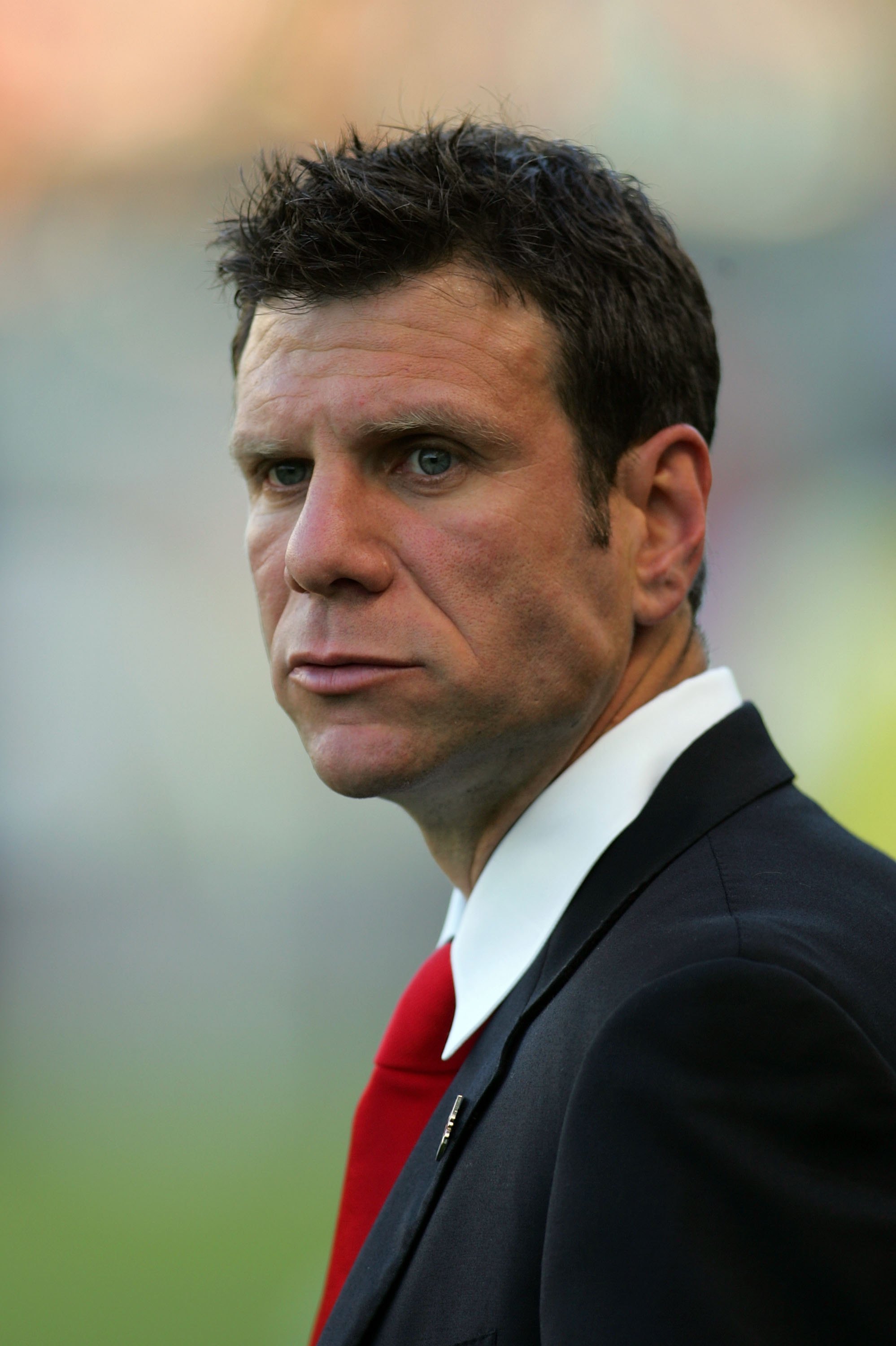 Jeff Agoos is one of the most decorated defenders in Major League Soccer.

From 2001-2004, Agoos earned two more MLS Cups as a member of the San Jose Earthquakes, playing alongside a certain Landon Donovan. He ended his career in 2005 as a member of the New York Red Bulls (formerly the NY/NJ MetroStars).

A member of the National Soccer Hall of Fame, Agoos earned 134 caps for the USA Men's National Team.
Agoos's 39 playoff games played are good for fourth all-time and his 3,557 playoff minutes are good for third all-time. He is currently Sporting Director of the Red Bulls. 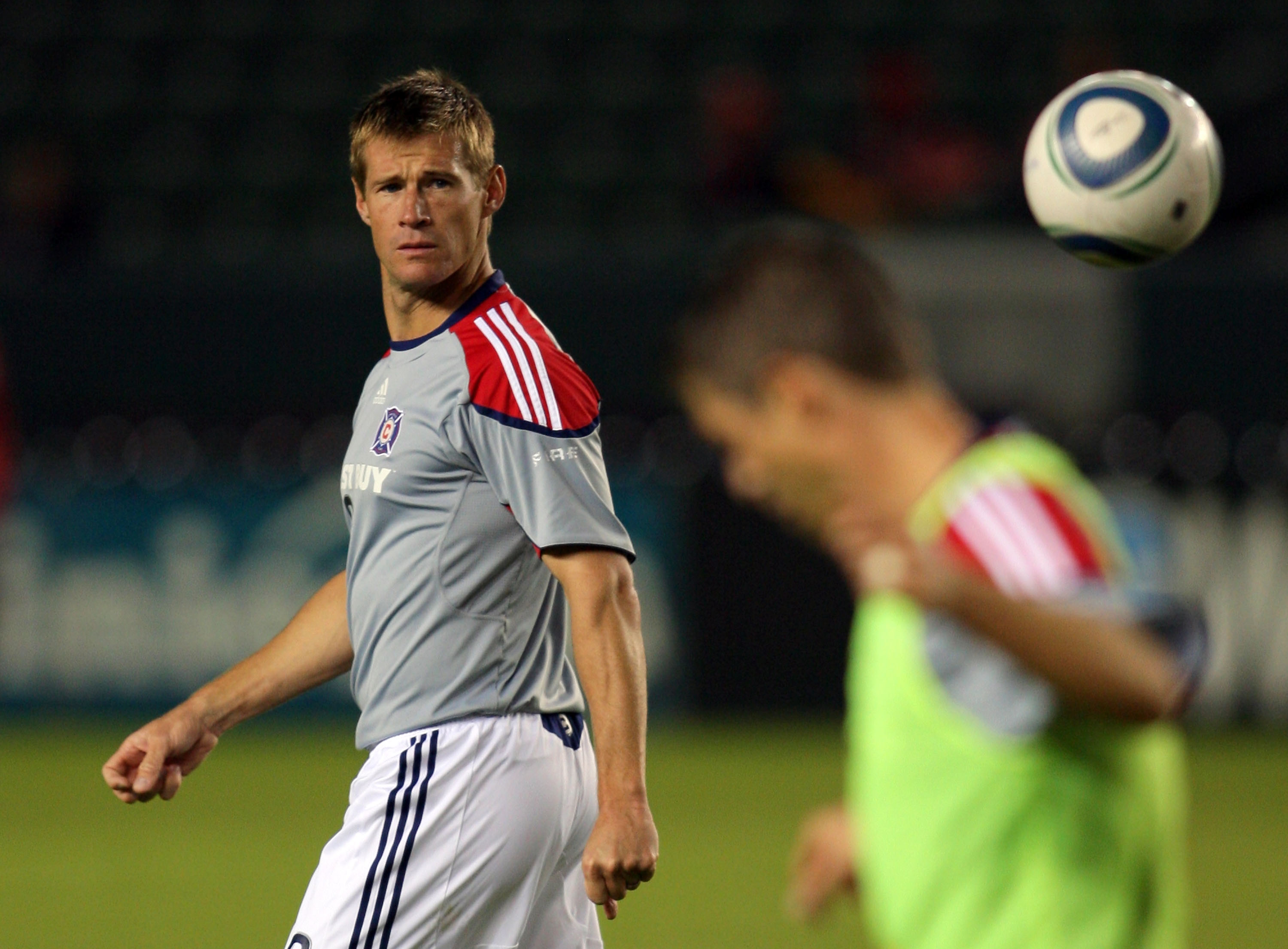 Another of MLS's most celebrated players is striker Brian McBride.

His career at Premier League side Fulham was sandwiched between stints with the Columbus Crew and the Chicago Fire.

As one of the Crew's original players, McBride scored 62 goals in 161 appearances while leading Columbus to the 2002 U.S. Open Cup.

After his career with Fulham ended, McBride closed out his footballing career with the Fire, scoring 18 goals in 59 appearances.

McBride's 10 league playoff goals is good for sixth all-time. As a member of the USA men's national team, McBride garnered 96 caps while scoring 30 goals for the Stars and Stripes. 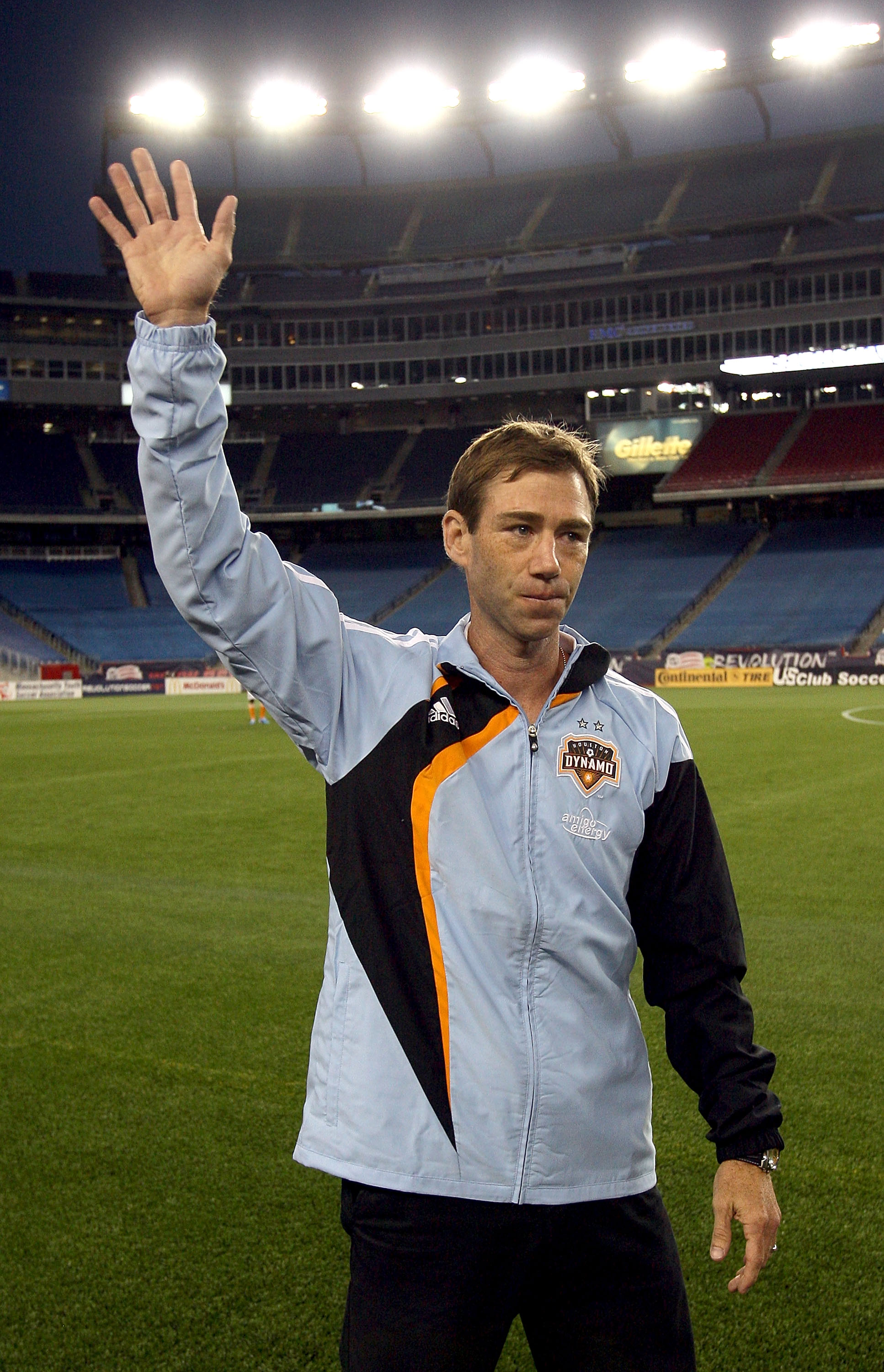 Ralston began his career as one of the original members of the Tampa Bay Mutiny, where he was a fixture in the lineup until the team's folding. Ralston scored 34 goals in 177 appearances.

After the 2001 season, Ralston played with the New England Revolution from 2002-2009, where he scored 42 times in 201 appearances. After a brief stint with defunct NASL club AC St. Louis, Ralston made one final appearance with the Revolution before retiring.

Ralston scored 76 goals in 379 league appearances. He is currently an assistant coach for Dominic Kinnear and the Houston Dynamo. 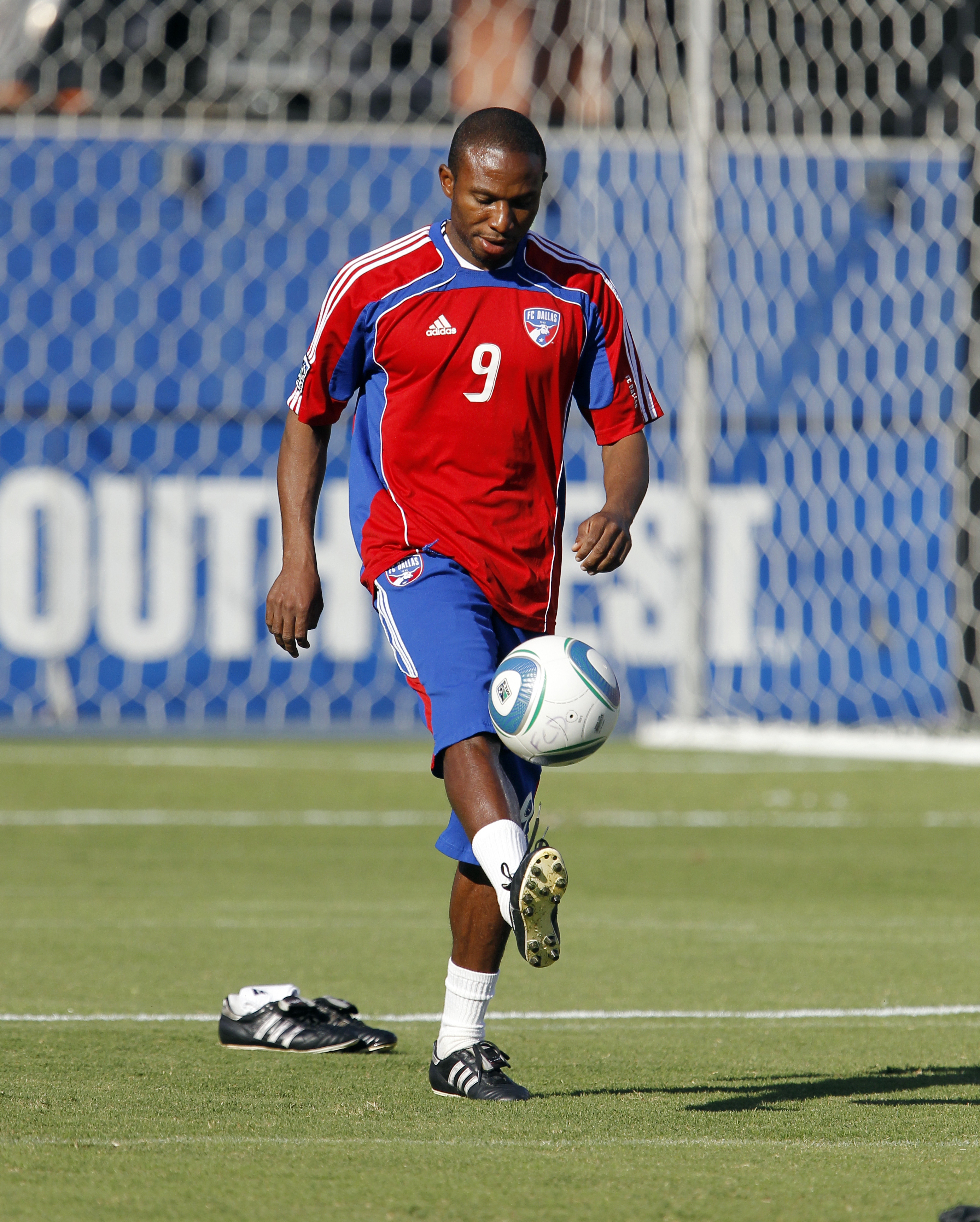 Cunningham's most prolific years came in his first stint with the Columbus Crew, where he scored 62 goals in 182 appearances. He also spent time as a member of the Colorado Rapids, Real Salt Lake, Toronto FC and FC Dallas.

With 132 goals to his credit, Cunningham just needs to score twice to pass Jaime Moreno for most career goals scored all-time in MLS. 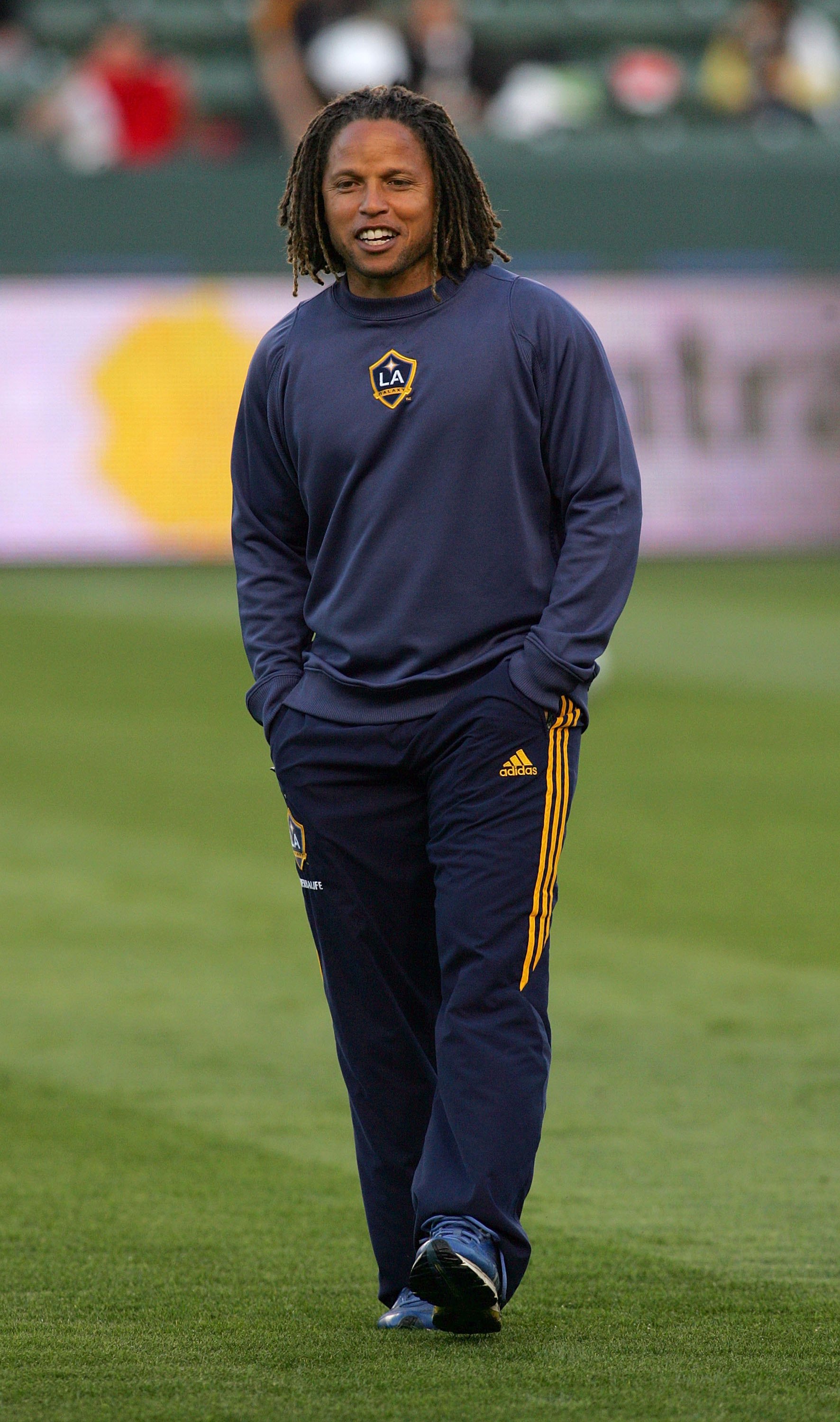 These days, midfielder Cobi Jones is doing business with the New York Cosmos in their bid to revive the sleeping giant. But not too long ago he was one of the Los Angeles Galaxy's most familiar faces.

He still is today.

In 14 seasons with the Galaxy, Jones scored 70 goals in 305 appearances. For his work as a player, his number #13 jersey is the only number that is retired at the Home Depot Center.

Jones continued his work with the Galaxy as an interim and assistant coach under Bruce Arena from 2008-2010.

As a member of the USA national team, Jones scored 15 goals in 164 appearances. 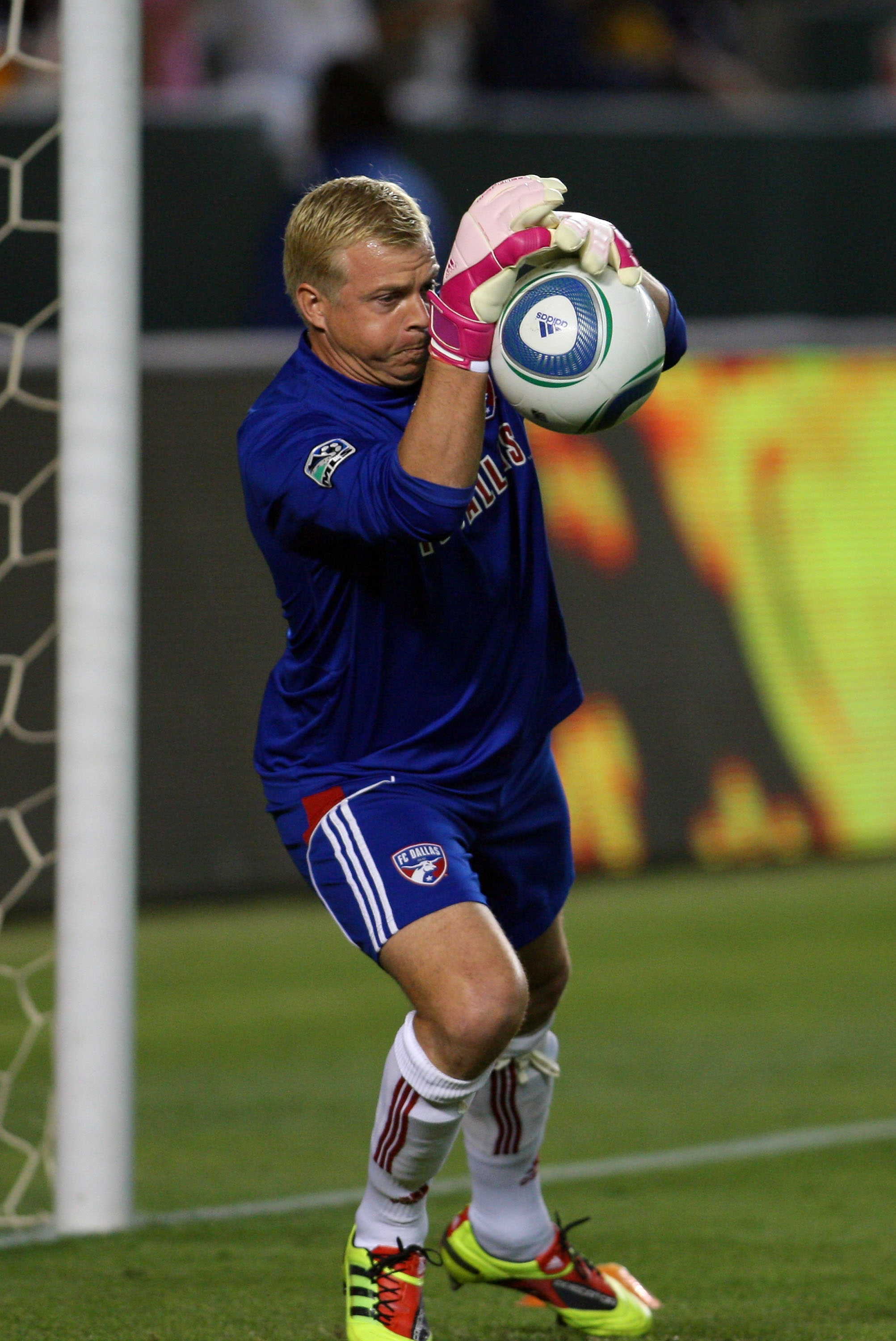 The longevity of the one they call "El Gato" must never be underestimated.

FC Dallas goalkeeper Kevin Hartman has had a long, storied career as a member of the Los Angeles Galaxy, Sporting Kansass City and the Hoops.

Hartman's most prolific years came with the Galaxy, in which he appeared 243 times in front of goal.

After 10 seasons, two MLS Cups, a U.S. Open Cup and a Supporters' Shield, Hartman took his stopping skills to Sporting, where he made 90 appearances from 2007-2009.

As a member of FC Dallas, he made 20 appearances in goal, though he was sidelined due to injury from a certain Thierry Henry. 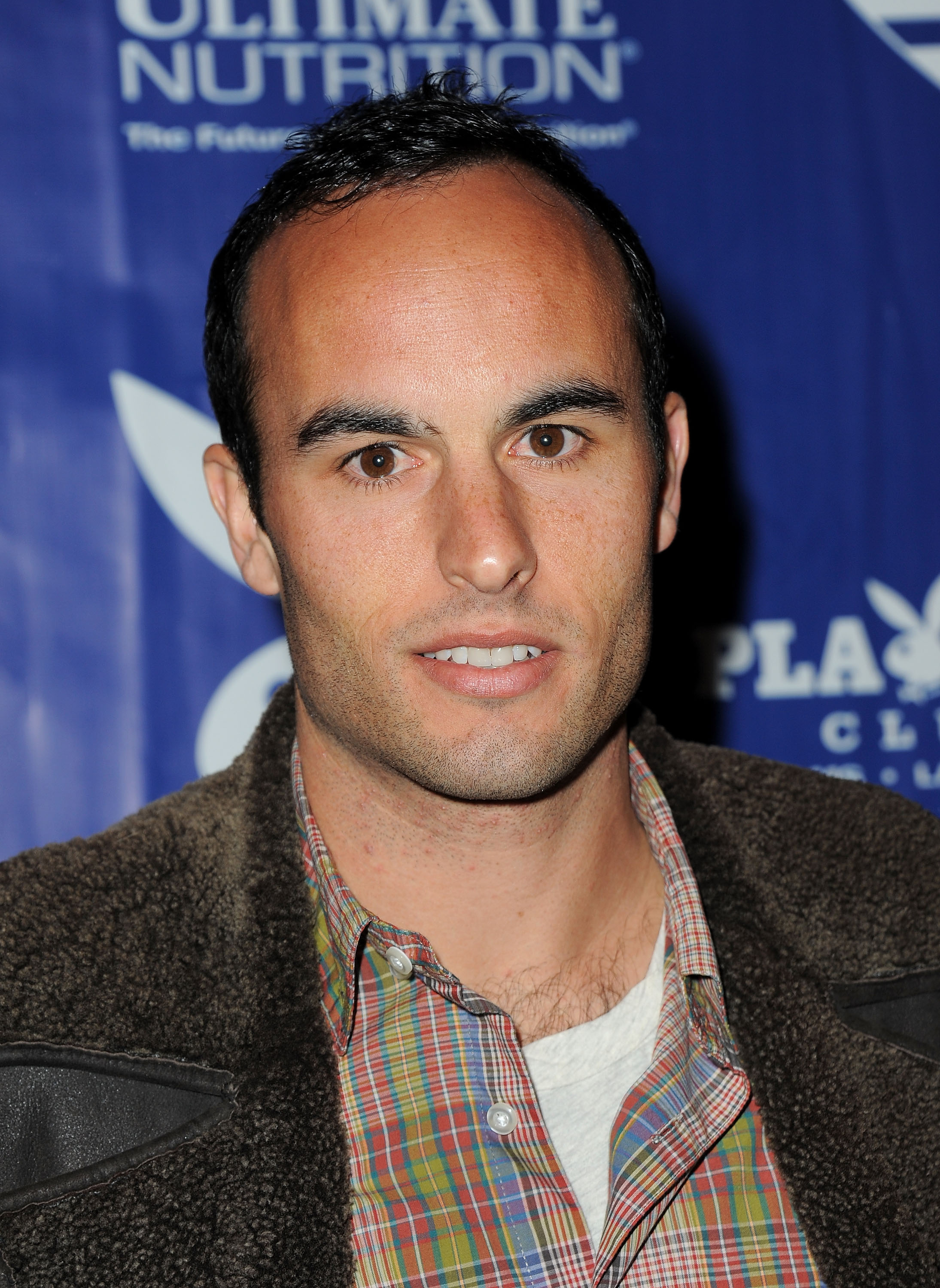 Midfielder Landon Donovan is not only one of the ambassadors of Major League Soccer, but American soccer in general.

Donovan broke on to the MLS scene in 2001 as a member of the San Jose Earthquakes, scoring 32 goals in 87 appearances while helping the Quakes win the MLS Cup in 2001 and 2003.

Afterwards, Donovan was acquired by the Galaxy, where he really began to make a name for himself. He helped lead the Galaxy to an MLS Cup and U.s. Open Cup in 2005 and a Supporters' Shield last season.

As a member of the national team, Donovan is the USA's all-time goalscorer (45) and assists (45) leader, a four-time U.S. Soccer Athlete of the Year and a seven-time Honda Player of the Year.

So far, Donovan has scored 103 league goals in 232 league appearances. His 17 playoff goals are an all-time record, while his 103 goals are fifth all-time. 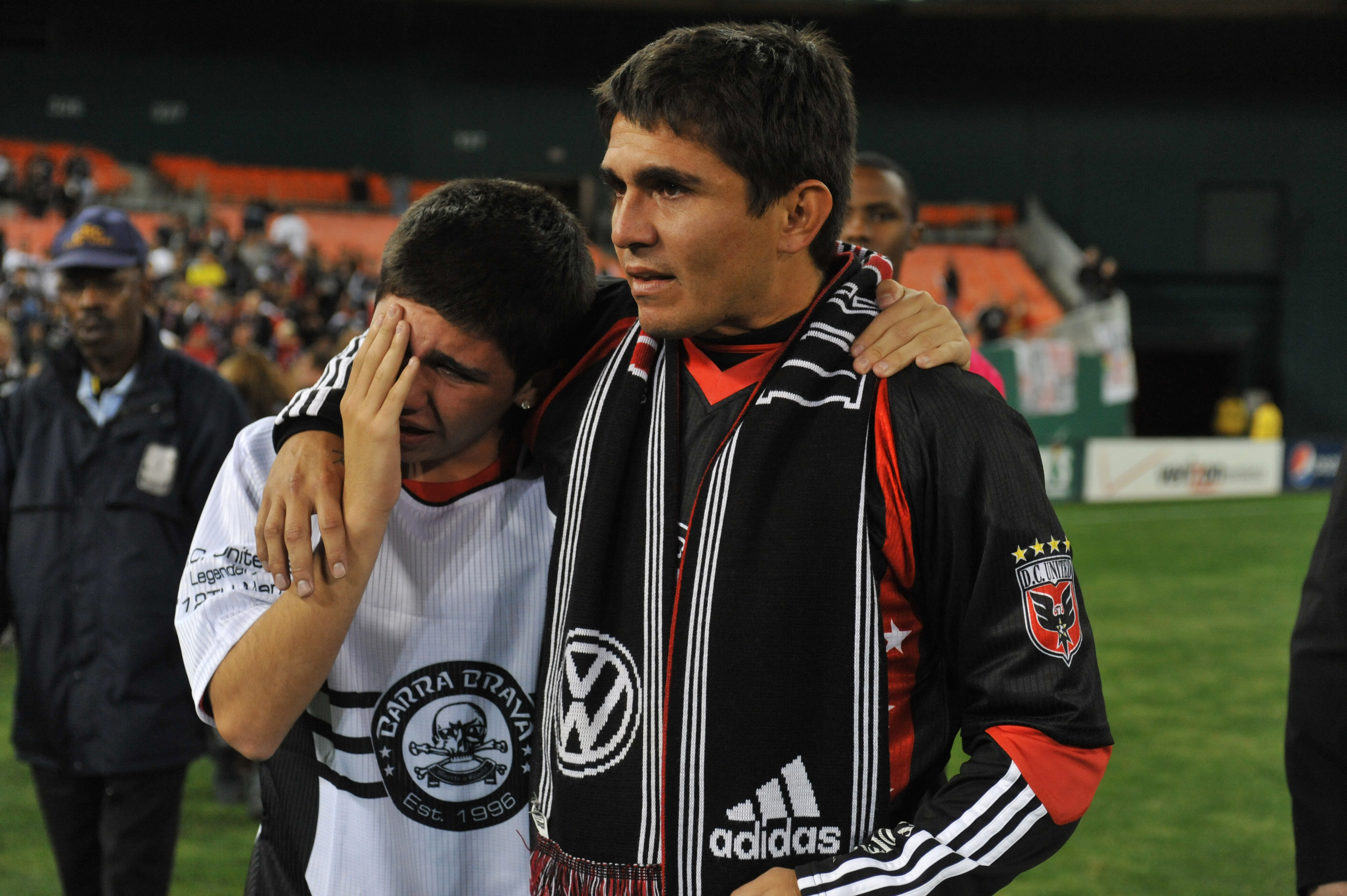 There is a reason why D.C. United forward Jaime Moreno is at the top of this list.

He is the all-time leading scorer with 133 goals.

He is fourth all-time in playoff goals with 12.

He is fourth all-time in games played with 340.

Finally, he is a five-time MLS Best XI selection.

Moreno helped lead D.C. United to just about all the silverware they have won, though he did have a brief spell with the Red Bulls.

It's because of these plaudits that Moreno is our No. 1 MLS Player of All-Time.

And his son James is training with Premier League side West Ham United. Could this be a sign that both father and son will have spent their time in MLS?