The Craziest Snow Moments In Sports 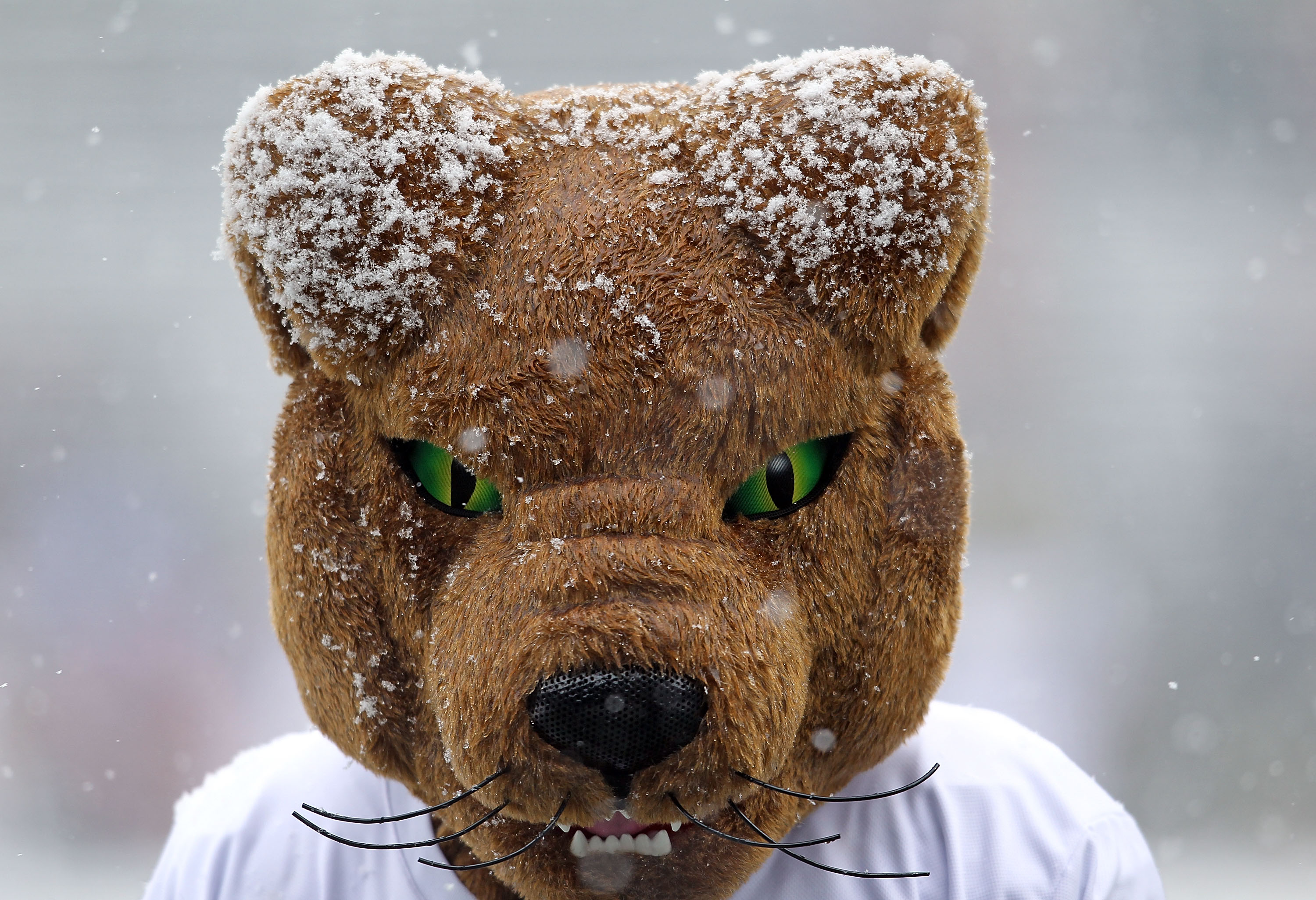 There are few things that change the entire identity of a sporting event the way snow does. From the fans, to the field, to the athletes who play in it, snow has a way of taking a mundane sports moment and making it memorable.

Since as long as sports have been played, the snow has wreaked havoc. Until they dome the earth (and one with a strong roof) snow will continue to affect the crowd and the athletes in crazy ways. Here is a look at the 20 craziest snow moments in sports. 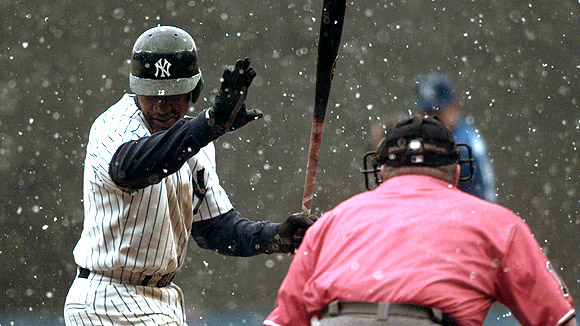 Baseball is supposed to evoke images of hot dogs, warm summer days and bonding moments between father and son. However, on opening day for the New York Yankees in 1996 there were more images of hot chocolate and snow angels. The Yankees hosted the Kansas City Royals amid snow showers and 38 degree temperatures.

Something significant about that day? It was Derek Jeter's first opening day in his proud pinstripes. The Yankees, like they were accustomed to doing during the late 90's won. And the Royals, of course, lost...I guess some things stayed the same.

This game wasn't significant for the snow that was on the field, but rather the snow that had to be cleared off of it. A week after the roof of the Metrodome collapsed, the NFL decided to host the Vikings next home game at the University of Minnesota's TCF Field. This was partly due to a 50th anniversary celebration the Vikings had planned to honor their great players.

The only problem was the Gophers hadn't played a game there in a month. Shovelers and plows worked all week to remove over 20 inches of snow from the field and the stands. The Bears won 40-14. For the way the Vikings played they could've kept the snow on the field.

The Patriots have had their fair share of memorable snow games,but few have had the audience participation then what has now been dubbed "Snow Fireworks."

In a game against the Miami Dolphins, Tedy Bruschi returned an interception for a touchdown to seal the Patriots 12-0 win. The crowd, at a fevered pitch, and surrounded by snow, began to create their own winter pyrotechnics to the tune of Gary Glitters Rock and Roll Part II. This proved that there isn't a crowd in the world that Gary Glitter can't excite. 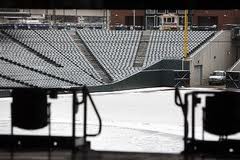 Very rarely is a baseball game interrupted by snow, but far more rare is a game that gets postponed by snow. During the 2009 playoffs the Phillies/Rockies game was postponed due to snow on the ground. The game was supposed to mark the first postseason start of Pedro Martinez in five years, but instead he was pushed back in favor of J.A Happ.

Another game dubbed the Snow Bowl, this one gave Cleveland something it knows all too well (bad football) and something they know far too little of (clinching a playoff birth).

The game was covered in two inches of snow and the turning point of the game may have been a long snap that sailed high and forced the Bills to have to kick the ball out of the end zone resulting in a safety and an 8-0 win for the Browns.

When the NFL decided that they would let New York City host the Super Bowl in 2014, everyone started to worry about what the weather would be like. They never thought the Super Bowl set in Dallas, Texas would become just as much of a concern.

With sub zero conditions, and six inches of snowfall throughout the area, Dallas literally became a city paralyzed. Flights were cancelled, taxi's were non existent, and the Green Bay Packers and the Pittsburgh Steelers had to change their practices around. 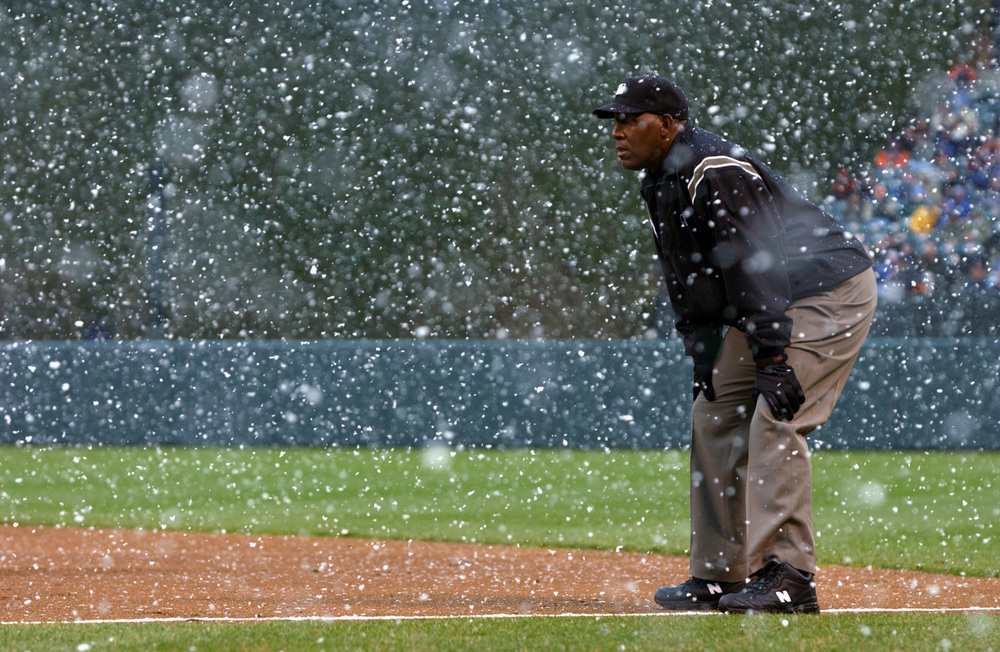 Opening day got a little snowy in Baltimore as the Indians and the Orioles battled through conditions that not only left visibility low, but left few people in the stands as the 13 inning game took shape. Jerry Hariston, the Orioles second baseman, admitted to not knowing where the ball was and just hoping it didn't hit him in the head.

The Green Bay Packers love the snow and proved it in the 2008 playoffs. They beat the Seattle Seahawks 42-20 in a divisional playoff game that has since been labeled “The Snow Globe Game” because of the large snowflakes that rained down during the game.

As the game drew to a close Brett Favre and Donald Driver even began throwing snowballs at one another in celebration. 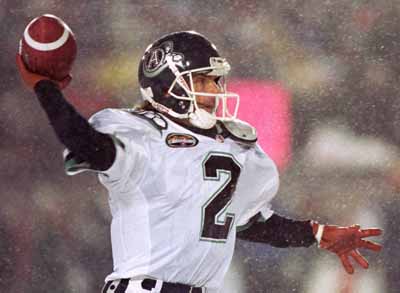 You know the snow is a problem when you need a tractor service just to play the game. The 84th Grey Cup match featured the Toronto Argonauts, Edmonton Eskimos and a tractor service to remove snow from the field before the game and at halftime. The Argonauts won 43-37 and the weather didn't hurt the spirits of the fans as it was still the biggest crowd in Grey Cup history. 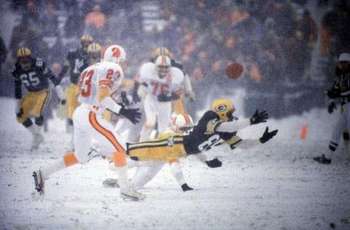 The Green Bay Packers and the Tampa Bay Buccaneers played in Lambeau Field with around 4 to 5 inches of snow on the ground. Green Bay Packers player Denard Preston had to have the help of local townspeople just to get out of his house.

Of course the Packers were the better snow team and beat a poor Tampa Bay team 21-0 despite not being able to see 15 yards in front of them. 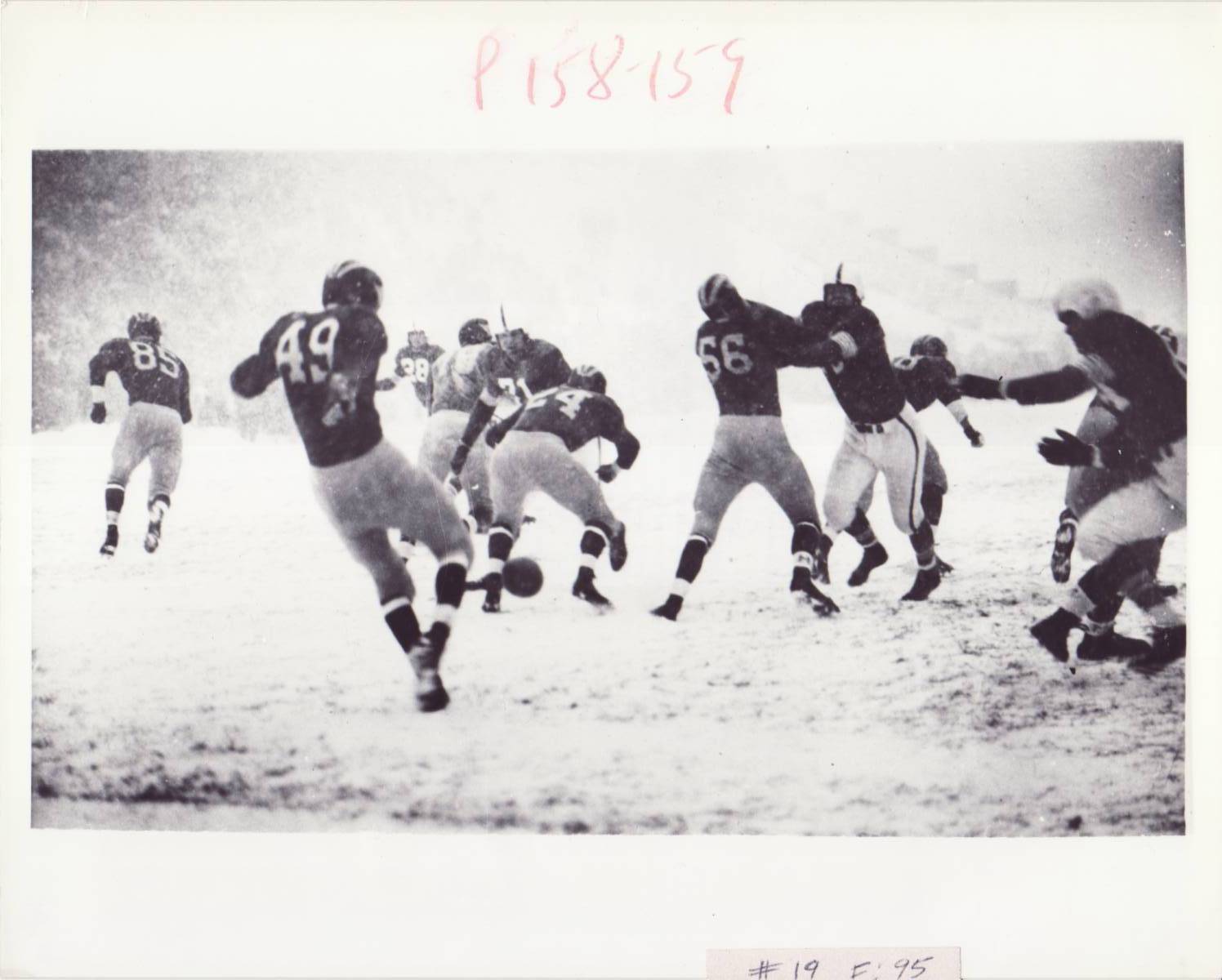 Ohio State and Michigan have had dozens of classic games in their storied history, but none more famous than the Snow Bowl. With the Big Ten championship on the line the Michigan Wolverines won the game, but it wasn't a dominating performance.

While Michigan managed to muster up 9 points, they never managed to get a first down or complete a pass. The two teams punted 45 times. Only the snow can cause that kind of offensive output.

While snow hit most of Europe and forced plenty of soccer teams to cancel their matches, it didn't force club Anderlecht and club Brugge from facing off. Of course snow makes the crowd plenty rowdy as they chucked snowballs at the Anderlecht players. The game had to be delayed for several minutes until the barrage stopped.

It's not enough that the Seattle Seahawks beat the Jets 13-3 to destroy the hopes the Jets had of heading to the playoffs, there fans had to get physical too.

As the Jets players were walking off the field as the lovey fans at Qwest Field decided to greet them with snowballs. Of course Shaun Ellis, never one to walk away from a fight, chucked a snowball into the stands and pelted a fan.

Ellis was fined $10,000 by the NFL and sued by the fan for physical and mental pain. As if being a Seahawks fan weren't mental pain enough.

After Dallas Cowboys' head coach Jimmy Johnson had accused Eagles coach Buddy Ryan of putting a bounty out on his players, the NFL knew the rematch in Philadelphia would be good. What they didn't anticipate was the Philadelphia crowd taking out their own bounty on the Cowboys.

After a week of snow, and little effort from the Veteran's Stadium crew, the Eagles fans had access to far too much snow and booze. They began hurling snowballs at the Cowboys players, hitting most notably Jimmy Johnson and Cowboys punter Mike Sexton. It prompted Johnson to call Eagles fans “thugs.” What would ever make him think that?

On their way to their first Super Bowl, the Patriots needed a little help from a shade of gray football rule.

With the Pats down by three, Tom Brady was hit on a blitz by Charles Woodson that resulted in him losing the ball. The officials originally ruled it a fumble, which would have sealed it for the Raiders, but upon further review they said it was a forward pass ruled incomplete and that Brady didn't tuck it away.

The Patriots tied up the game and then won it in overtime. This controversy led to the famous “Tuck Rule.”

On a day where neither team could move the ball, thanks to the enormous amount of snow that covered the field, the Patriots sent out an ex-convict on a work release program to plow a patch for the Patriots that would be the only points scored in the game.

Up til that point it had never been done before, and it nearly sent Don Shula into a rage that could have melted all the snow in Massachusetts.

Leon Lett wasn't the worlds smartest football player, and he proved it time and time again; but no instance was more telling than the Thanksgiving day game against the Miami Dolphins.

The Dallas Cowboys blocked a game winning field goal. All the Cowboys had to do, as the ball spun around, was not touch it. Lett decided to try to recover the fumble instead.

The snow created a sloppy exchange that resulted in the Dolphins recovering the ball on the 1 yard line where their next field goal attempt was successful. 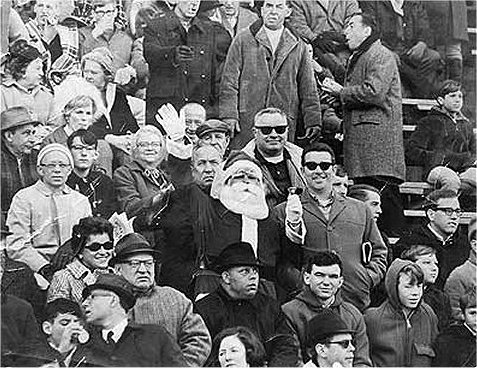 If you listen to someone outside of Philadelphia tell it, it sounds like Eagles fans decided to blast Santa with snowballs, but the real story is rather different.

When the guy hired to play Santa couldn't get to the stadium, due to the snow, the guy they got to play Santa didn't exactly evoke the holiday spirit.

A slightly drunk and disheveled Santa appeared for the half time Christmas parade and when the fans booed, he egged them on until they began to hit him with snowballs. After that a snowball frenzy ensued. Only in Philadelphia, folks.

In the first season after the departure of Big East Coach of the Year, Brian Kelly, the Cincinnati Bearcats finished a rough 4-8, which apparently put their mascot in a hostile mood.

The Bearcats mascot got unruly during their final game, a 28-10 loss to Pittsburgh. He began pelting the crowd with snowballs. When law enforcement asked him to stop, he refused. The were forced them to arrest the mascot. He was charged with disorderly conduct and Cincinnati had to scramble to find a back up mascot at half time.

The NFL got it's first ever snow disaster thanks to a snow storm that rocked the city of Minneapolis. 17 inches of snow sat upon the well known Metrodome where the Vikings play and were set to take on the New York Giants.

Overnight the weight of almost 2,000 tons of snow that sat upon the Metrodome roof was enough to make it collapse and shut down the stadium for the rest of the season and possibly longer.