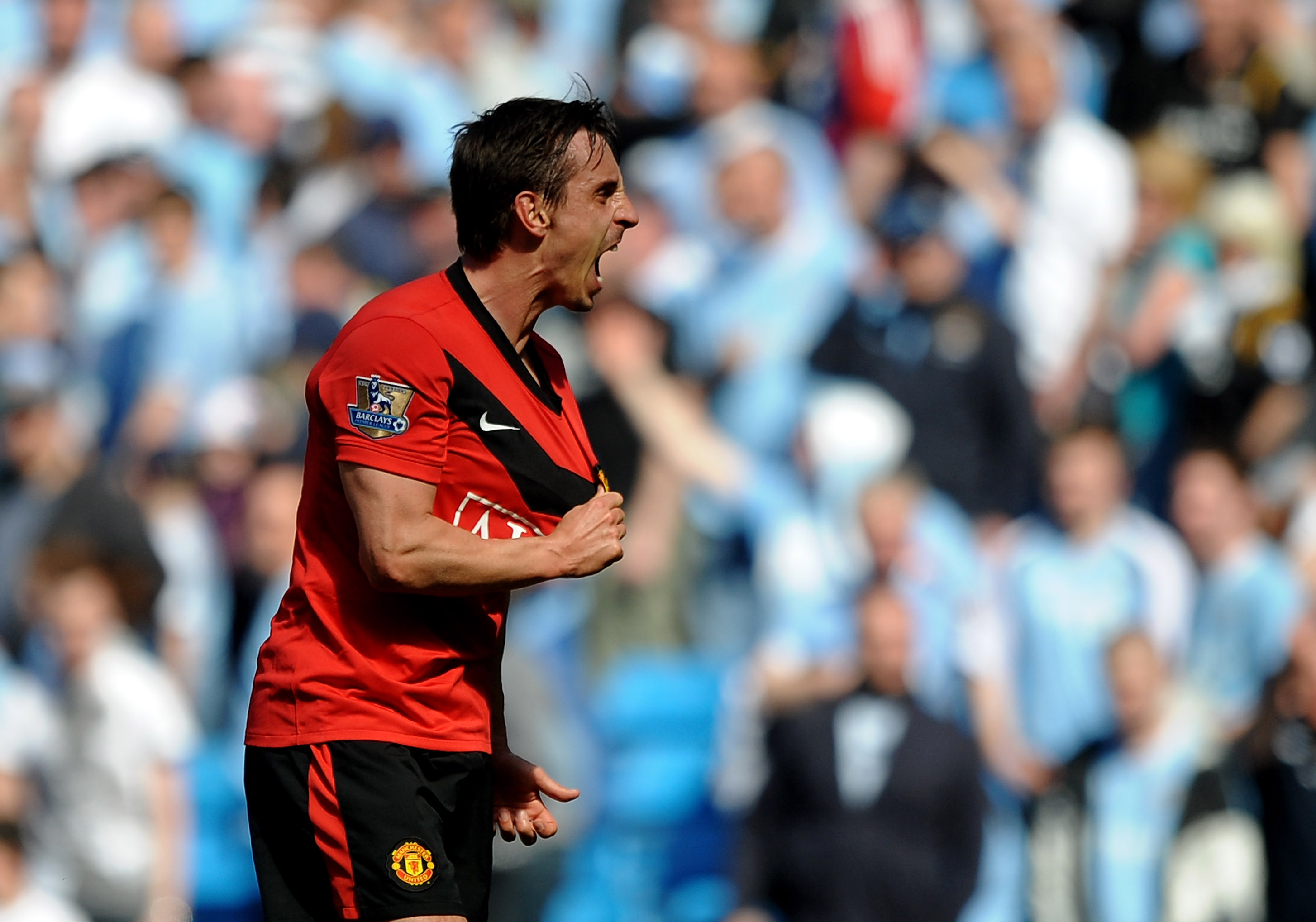 Gary Neville. Love him or hate him, it's easy to respect him for what he has achieved as a player for both club and country in his career of almost 20 years, which came to an abrupt end this week. He is a player who's career deserves to be acknowledged and who will live long in the memory as one of the greatest right backs of his generation.

Over the next few slides we'll pay tribute to Gary Neville by taking a look at his entire career, from his early days as a United trainee to his later days captaining his side to trophy after trophy. Enjoy. 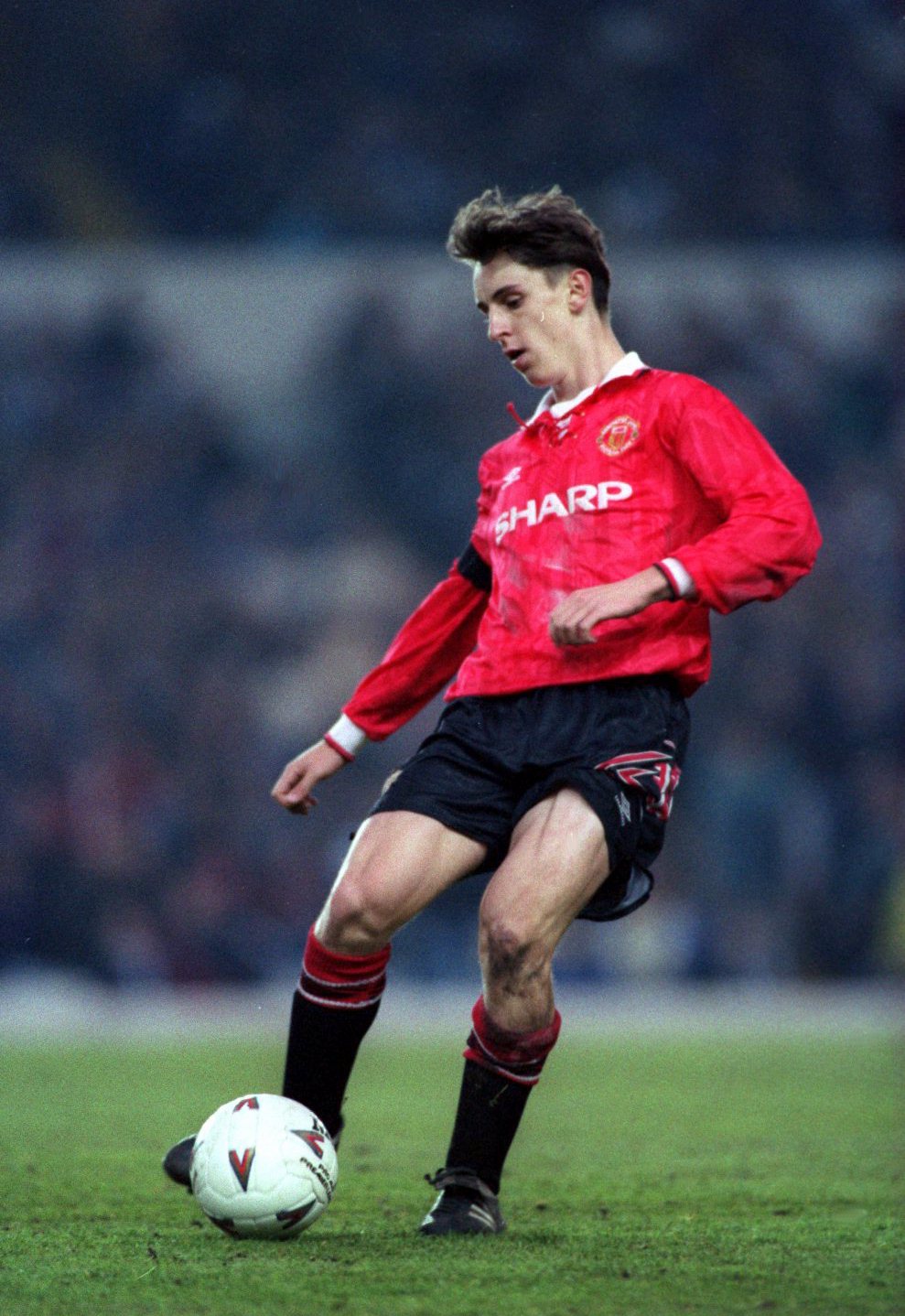 During his first season at the club, Neville captained the Manchester United youth side to FA Youth Cup glory, beating Crystal Palace 6-3 on aggregate. The side Neville captained included players such as David Beckham, Ryan Giggs, Nicky Butt and Robbie Savage.

A similar youth side, the only real differences being the addition of Paul Scholes and Gary's brother Phil, reached the same final the next year, but were beaten 4-1 by Lees United.

Following the cup win, Neville made the step up to the first team and made his debut, and only first team appearance that season, at 17 years of age in a UEFA Cup tie against Torpedo Moscow ending 0-0. 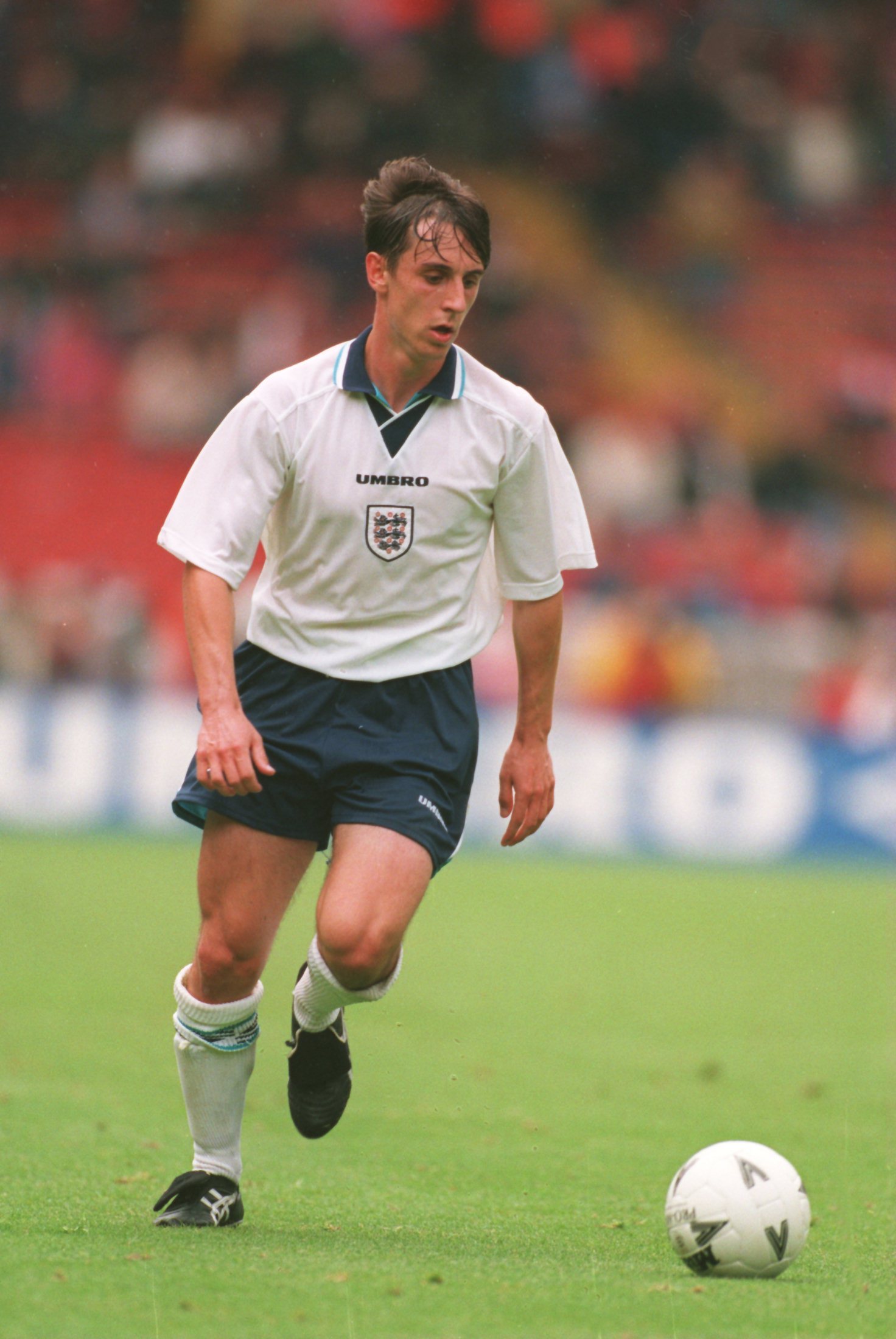 The 1994-95 season saw Neville become a first team regular as a result of an injury to regular first choice right back Paul Parker. He made his first appearance in a major cup final, losing 1-0 to Everton at Wembley in the FA Cup.

His promotion to first team regular at United saw him called him for England duty in 1995 by then manager Terry Venables. His debut came during the Umbro Cup at Wembley Stadium, in which England finished second. 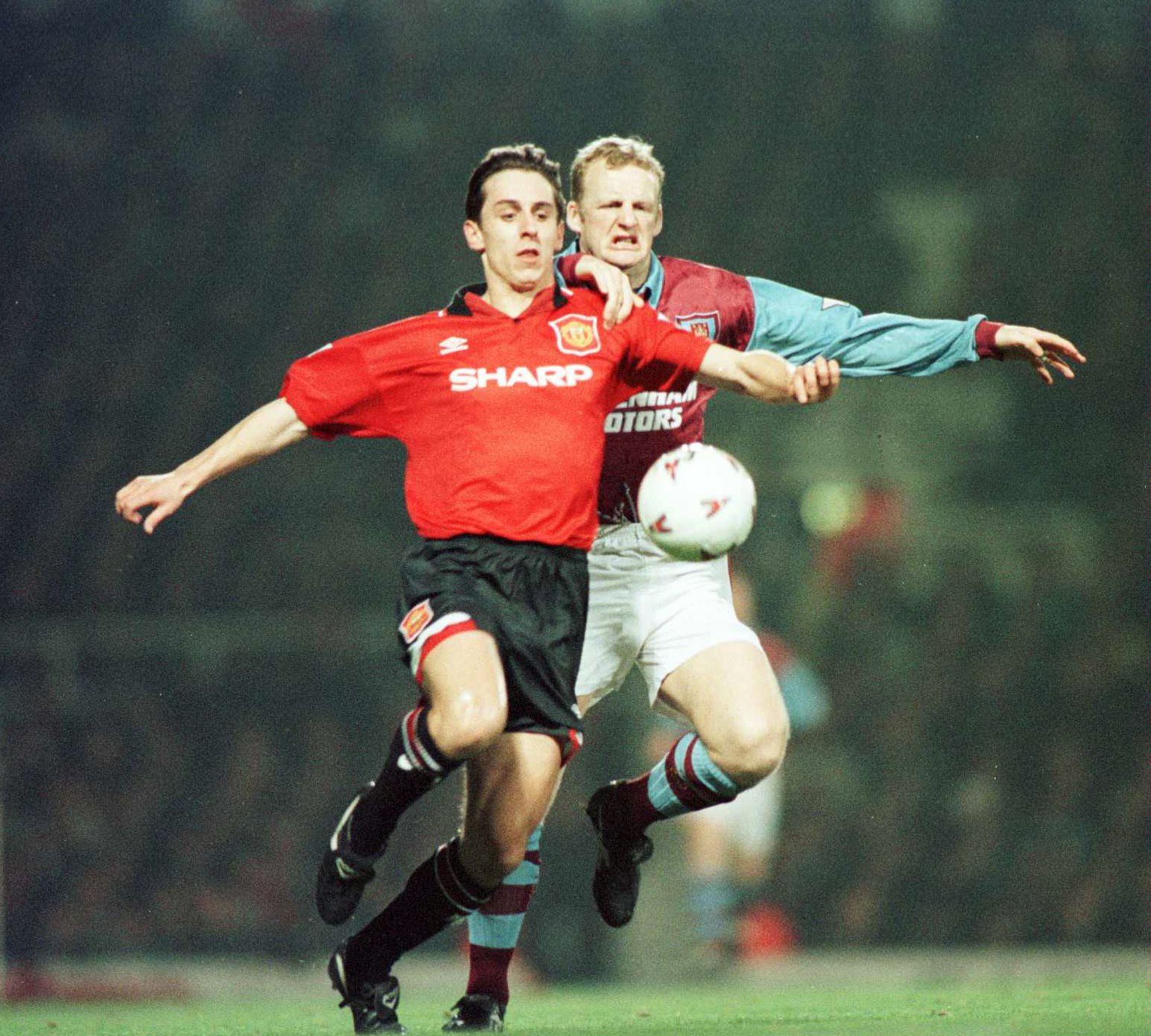 The 1995-96 season was Neville's first season of any real success in terms of silverware. He played in almost every game for United as they became the first team to win two domestic doubles of the Premier League (First Division the first time round) and the FA Cup, the latter of which was made all the more enjoyable by beating rivals Liverpool 1-0 in the final.

As well as his success for his club, Neville played a prominent role in the England side that reached the semi-finals of the 1996 European Championships, eventually succumbing to the Germans on penalties...again.

Nevertheless, Gary Neville had shown, for the first time, what he was capable of at right back on big occasions; something which would come in handy for the future... 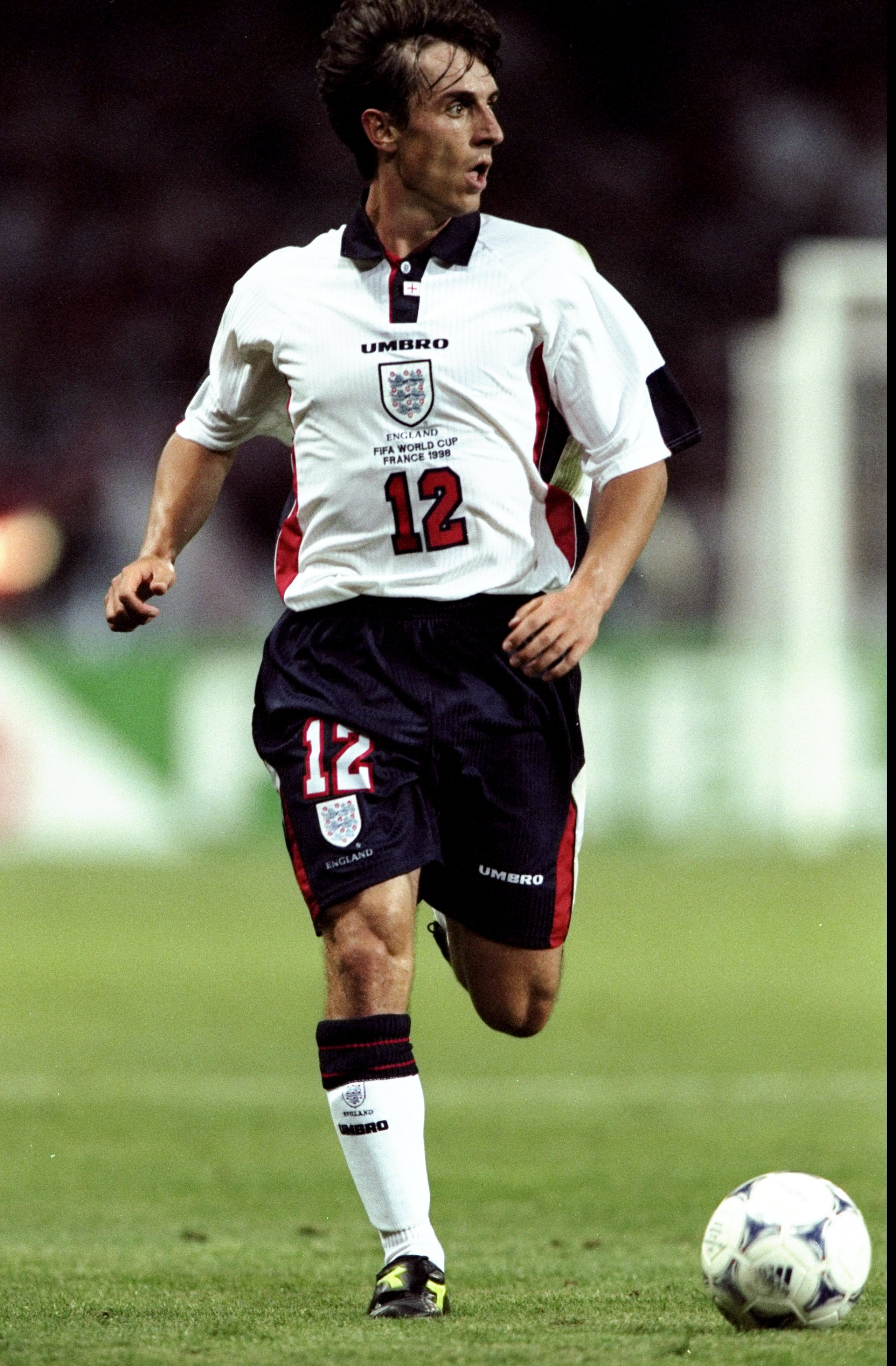 Following the European Championships, Neville scored his first goal for the club in the following 1996-97 season in a 3-3 thriller against Middlesbrough. It was the only time he scored that season as United once again comfortably won the league title.

He made his first World Cup appearance during France 1998, featuring in group games against Romania and Colombia before appearing in the famous 2-2 clash against Argentina, during which David Beckham became a national hate figure and the Argentinians knocked England out on penalties. 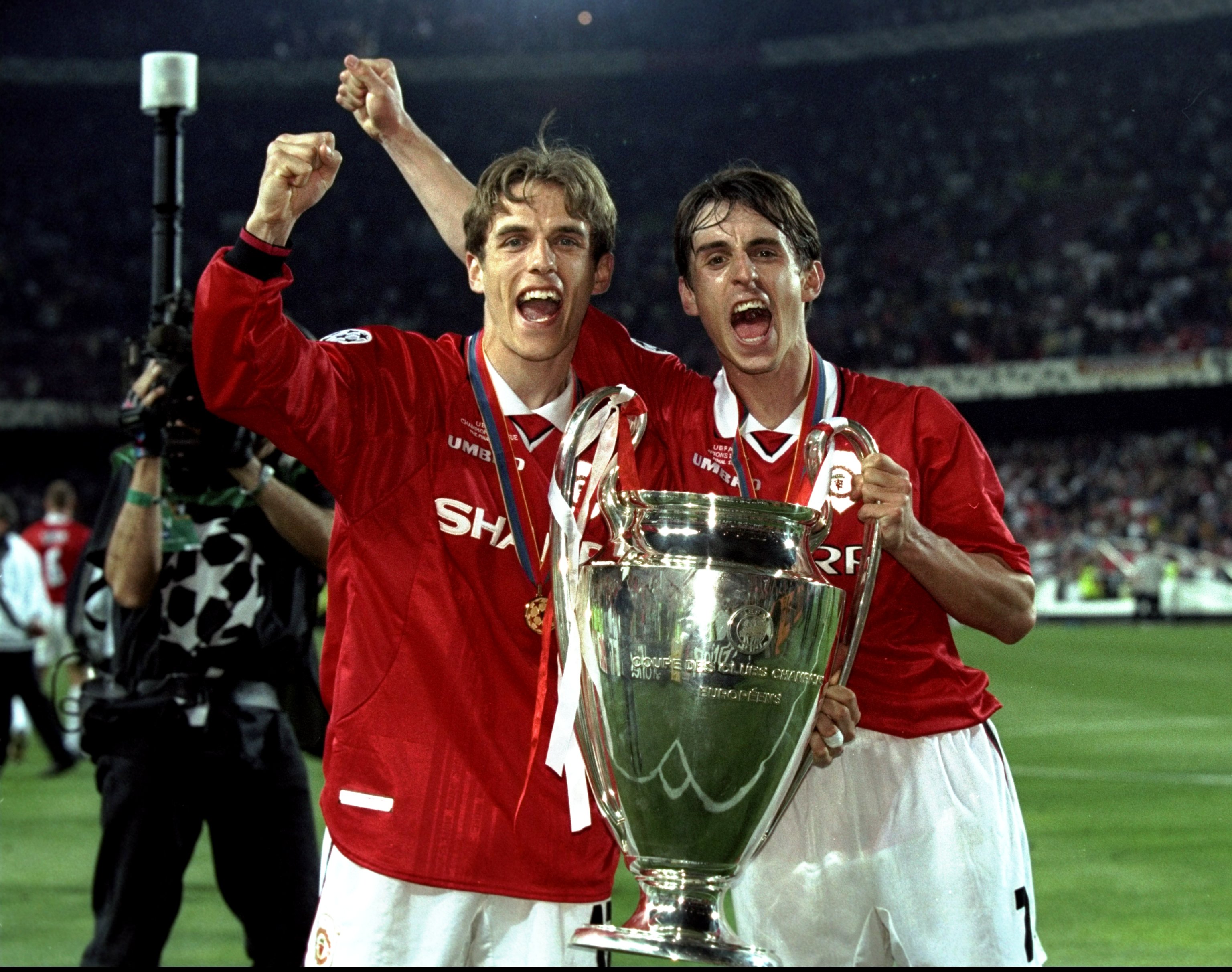 This was to be the year Gary Neville, as well as millions of other football fans, would never forget.

Neville played 34 times as United clinched the league title on the last day by a single point, having conceeded the title to Arsenal by the same margin a year earlier. As well as the league title, they also went on to beat Newcastle 2-0 in the FA Cup Final, during which Neville featured in every game.

They then had the chance to complete the treble of the League title, the FA Cup and the UEFA Champions League, which had never been done before. Neville started and finished the match, which saw United 0-1 with 90 minutes played, only to be European Champions after 93 minutes having won the game 2-1. 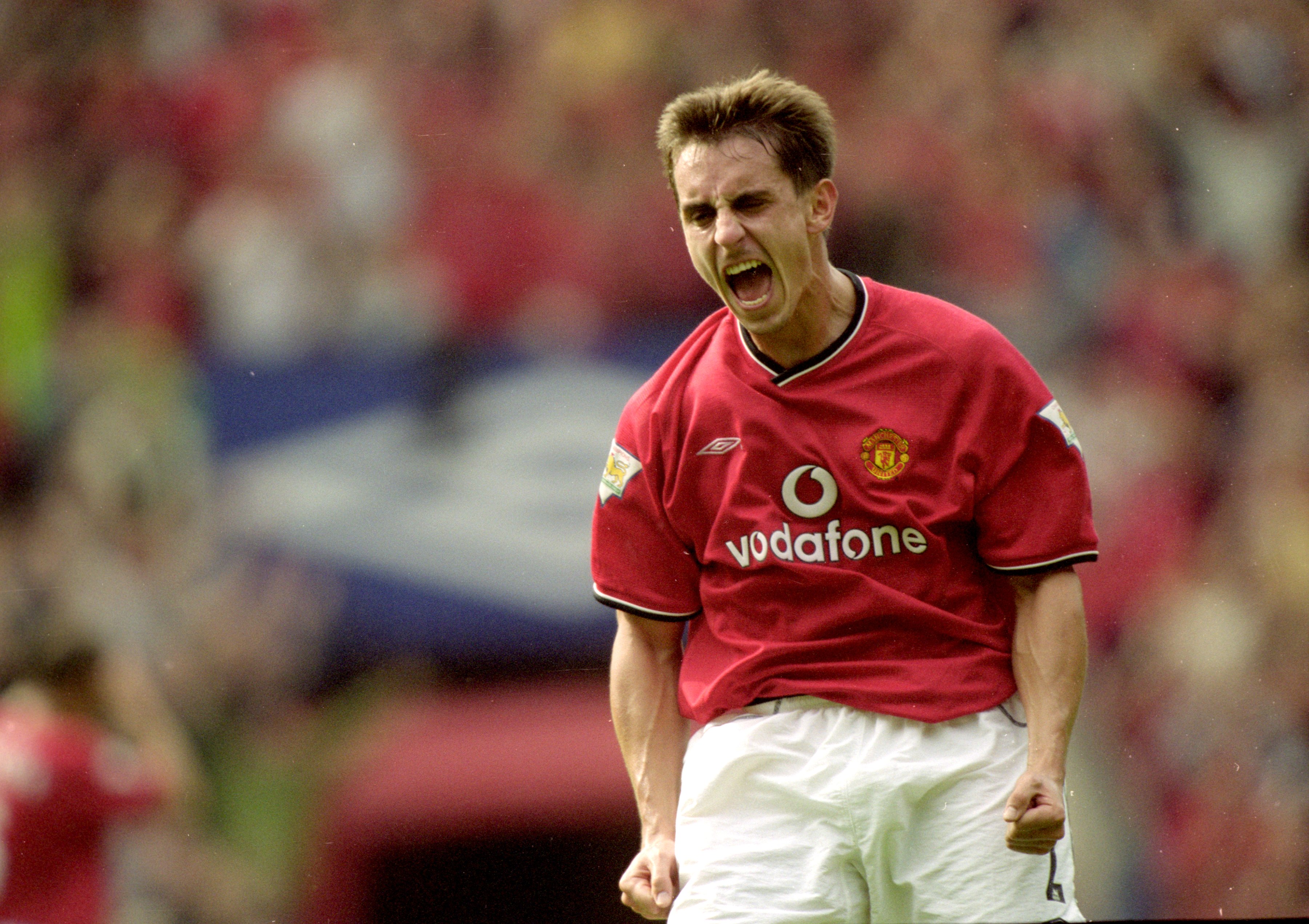 The season following United's incredible triumph saw Neville win his fourth League title with the club as well as making his 250th club appearance. He went on to win the league for a fifth time and an unprecedented third time in a row, as well as winning his 50th England cap.

However, these season were blemished with disappointing cup runs and a missed Would Cup due to injury.

2003-2004: The Return Of FA Cup Glory and European Championship Defeat 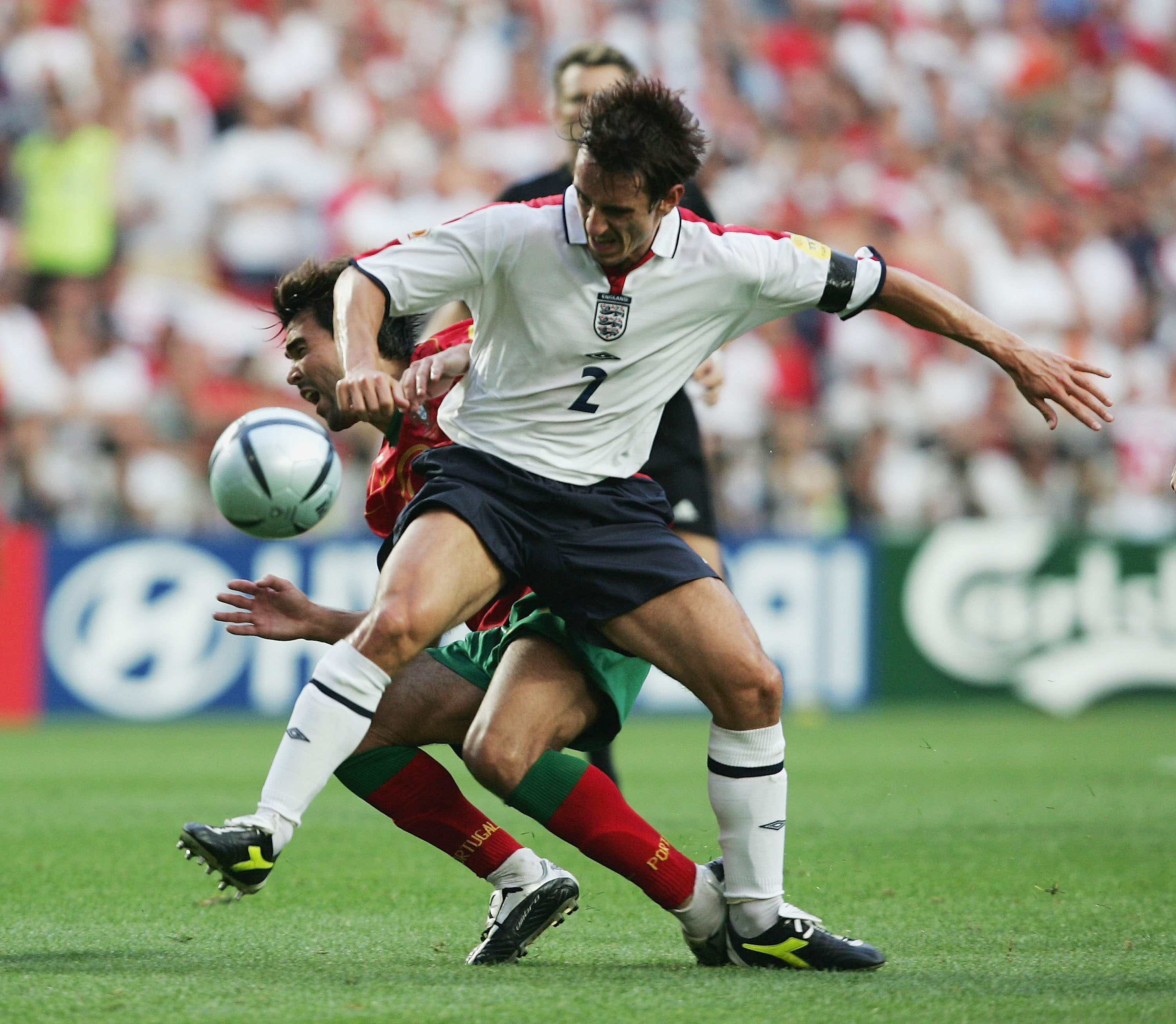 More disappointing European cup runs followed for Neville and United, and they began to struggle domestically in terms of winning titles, despite Neville being one of the integral members of the squad. Arsenal had won the league in 2001-02, which had kick-started a title battle between Arsenal, Manchester United and then later Chelsea, which would last until the present day, thus ending United's sheer dominance in the league.

Neville did win the title in 2003 with United, as well as winning the FA Cup in 2004 for the first time since their treble win back in 1999.

He also played every minute of every game at the 2004 European Championships for England as they reached the Quarter Finals, only to be knocked out by Portugal on penalties. 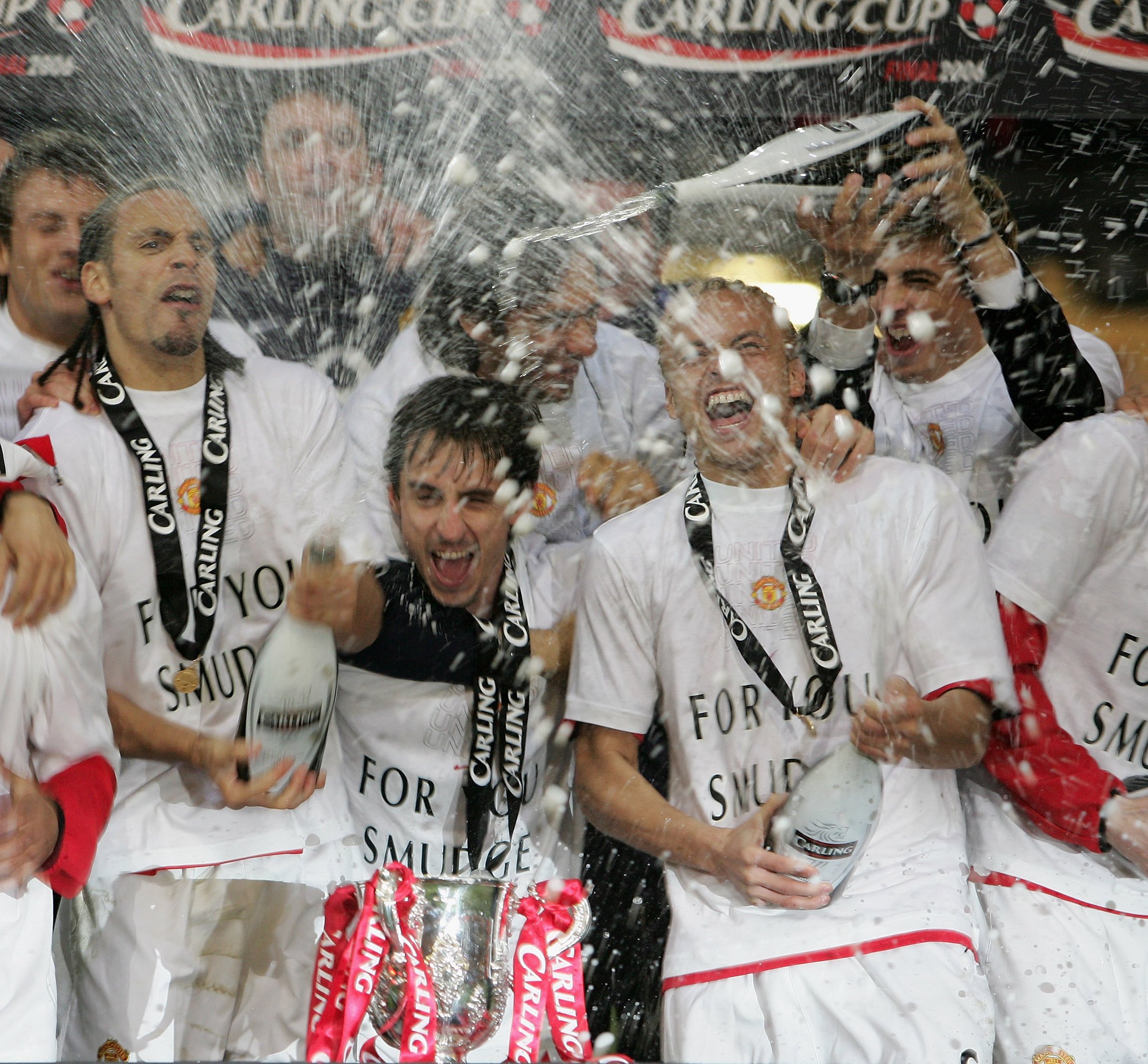 Following Roy Keane's departure to Celtic, Gary Neville was made club captain in 2005 and lifted his first trophy as captain when United won the Carling Cup the same season. He lifted the Premier League trophy for the first time in 2007 after a three-season title drought.

He played every game at a disappointing World Cup 2006 campaign in which England made it to the Quarter Finals, only to be defeated by Portugal...on penalties. Sound familiar? 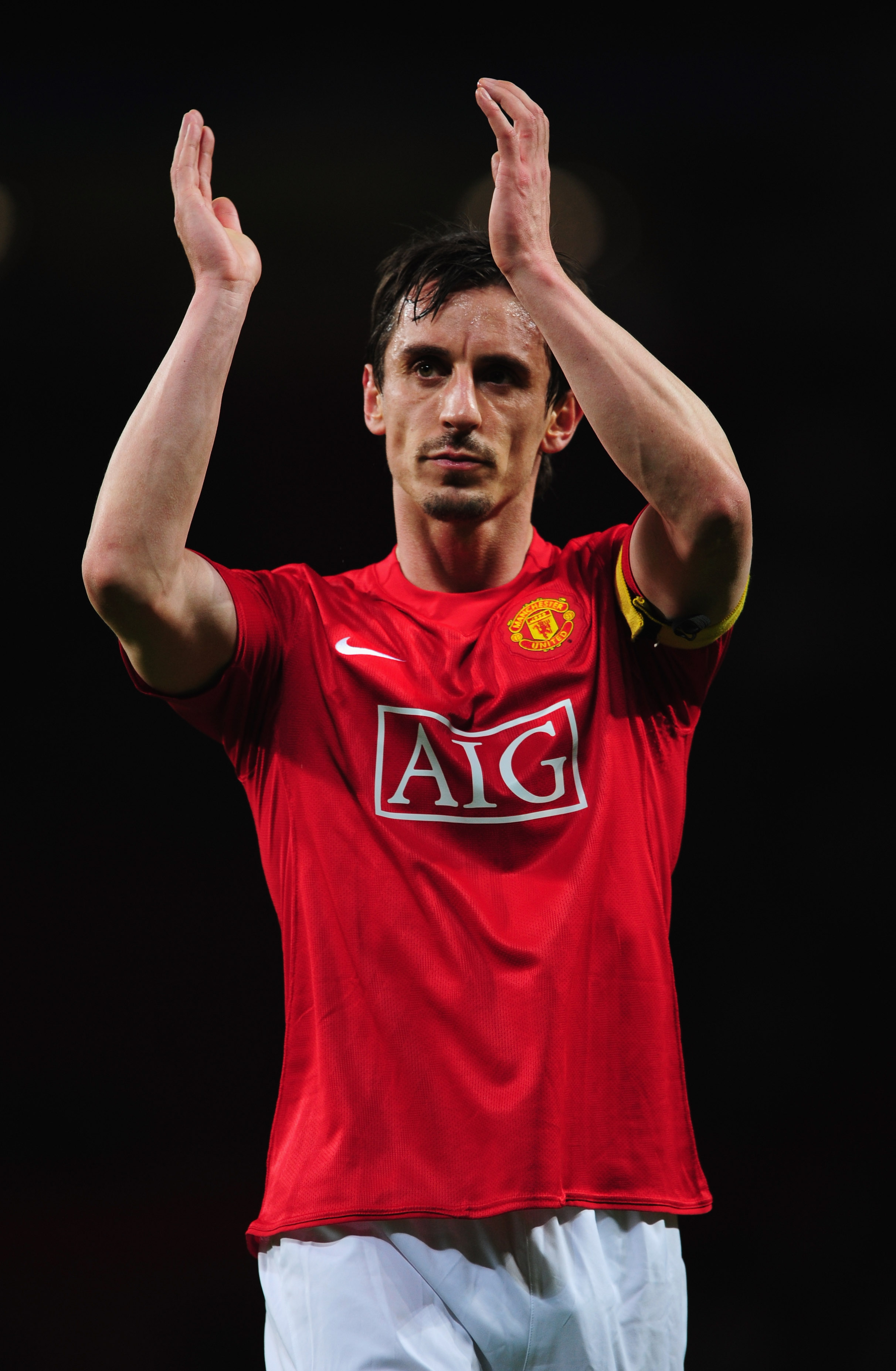 Neville missed the entire success of United's 2007-08 season, except for one European substitute appearance, in which they won the League title and the Champions League, after a horrible ankle break.

His league appearances over the next two season were limited to just 16 and 17 respectively, as he began to face tough competition for his place from Wes Brown and Rafael. Despite this, he still lifted the Premier League trophy, along with Ryan Giggs, at the end of the 2008-09 season along with lifting the League Cup in both the 2008-09 and 2009-10 seasons.

He played his final game for England in 2008 against Holland. He didn't retire, but was kept out of the squad by injury for the rest of the year. He was recalled a year later, but did not actually feature. 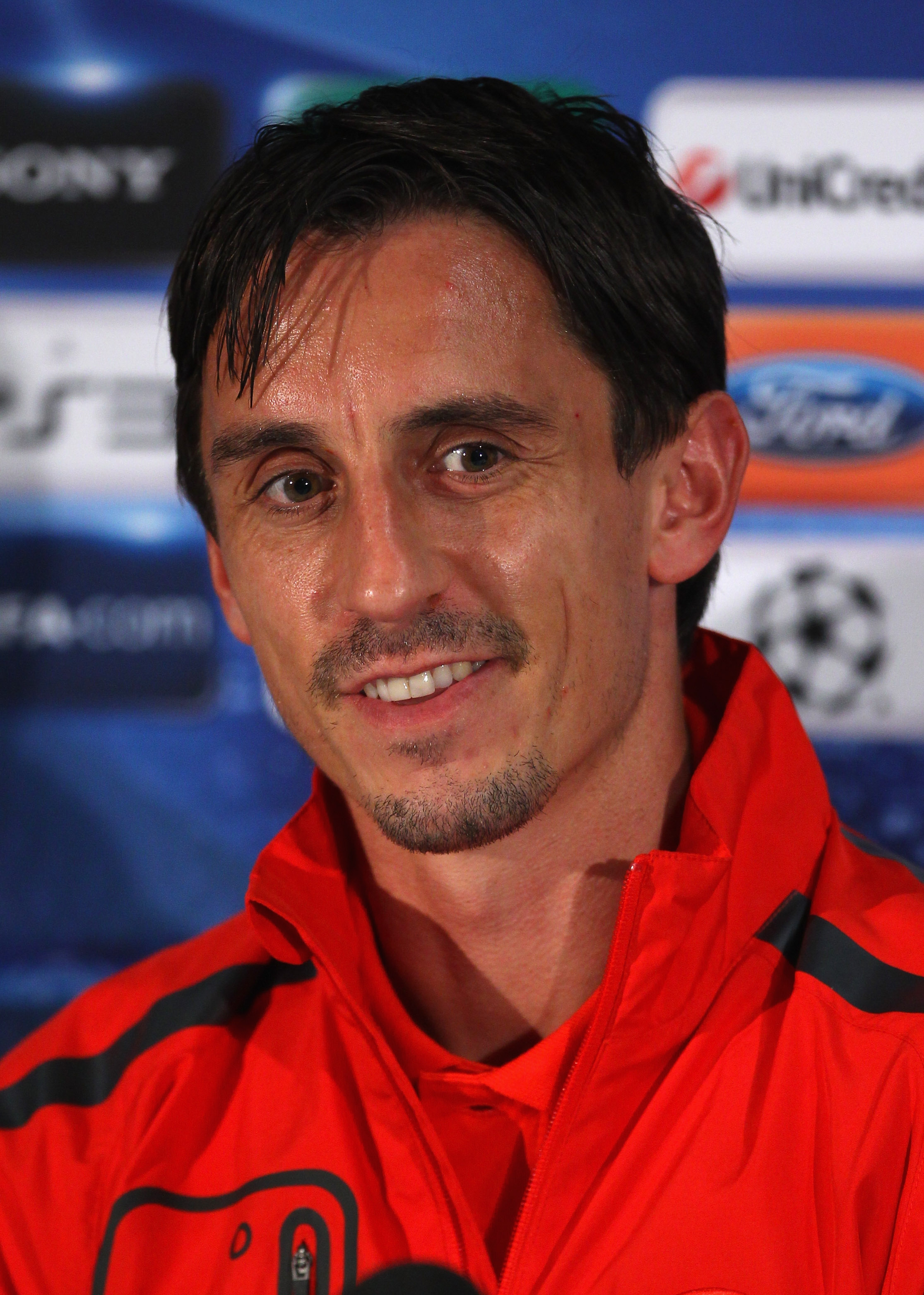 On 2nd February 2011, Gary Neville announced that he would be retiring from football with immediate effect. He has made 3 league appearances this season, as well as one appearance in the League Cup.

His final game, after a career of almost 20 years at United, was a 2-1 victory on New Year's Day over West Brom.

He was undoubtedly one of the best right-backs of the past 20 years, as well as being the most capped England right-back of all time and has played against, and with, some of greatest players in the world. He was consistent, successful, passionate and he never gave up. He won every domestic trophy there was and he did it all with the same club.

A lot of you who will be reading this will have been around for his entire career; I have. And his will be a name which will go down in football folklore as one of the all time greats. 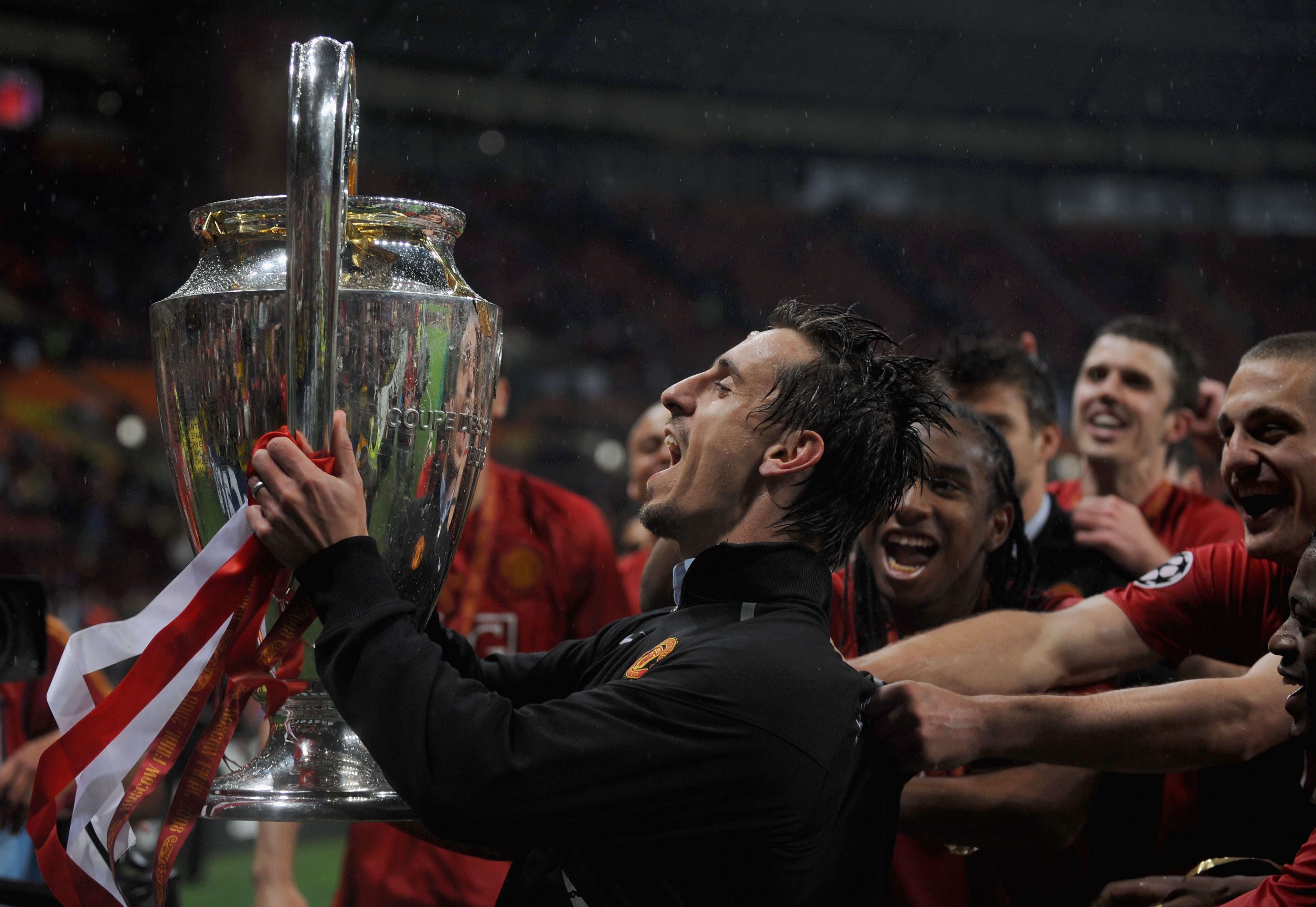