The Craziest Fan Outfits In Sports 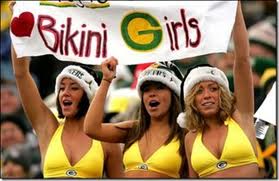 Sporting events bring out the best (read: worst) in fans. They spend all of their effort and creativity into putting together the ultimate game-time garb.

The end result is usually something that ends up circulating the internet for everyone else to make fun of. But the truth that we're all envious that we never went through with anything like that ourselves.

So be proud, insane fans. Your masks, face paint, props and more are not lost on the rest of us. We may appear to point and laugh at you but insider we're really laughing with you.

Here are 10 of the craziest fan outfits ever. 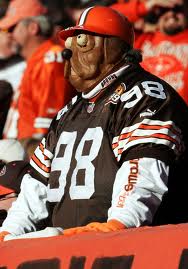 Big Dawg isn't alone in the Dawg Pound, but he is definitively the big man of the section and is known as the "Canine-in-Chief". His bulk is part of the costume, adding authenticity.

He's the benchmark for all other Browns fans with dog masks and too many ribs and beer in their over-sized stomachs.

Showing up to every game dressed like that shows some serious dedications. I just hope he changes the mask every few games. 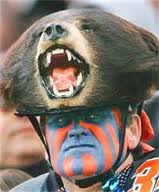 I wonder if this guy gets the irony in his outfit. In order to support his Chicago Bears, he's sporting the head of a dead bear. He's kind of sending mixed messages.

How mad would he be if somebody spilled beer on it? Hunting trips for game like that run thousands of dollars. Then, you actually have to make the kill.

After taxidermy costs, this ends up being an outrageously expensive fan outfit. 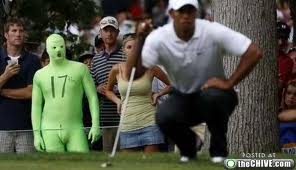 Besides the obvious question of how did this fan even get into a golf tournament dressed like this, there is plenty to take from this picture.

There are the pros: it grabs attention, allows for limber spectating and apparently is a hit with the ladies. But there are cons: it's spandex, creepy and limiting. After all, how can you where that at hole one or two? Or even three, for that matter? 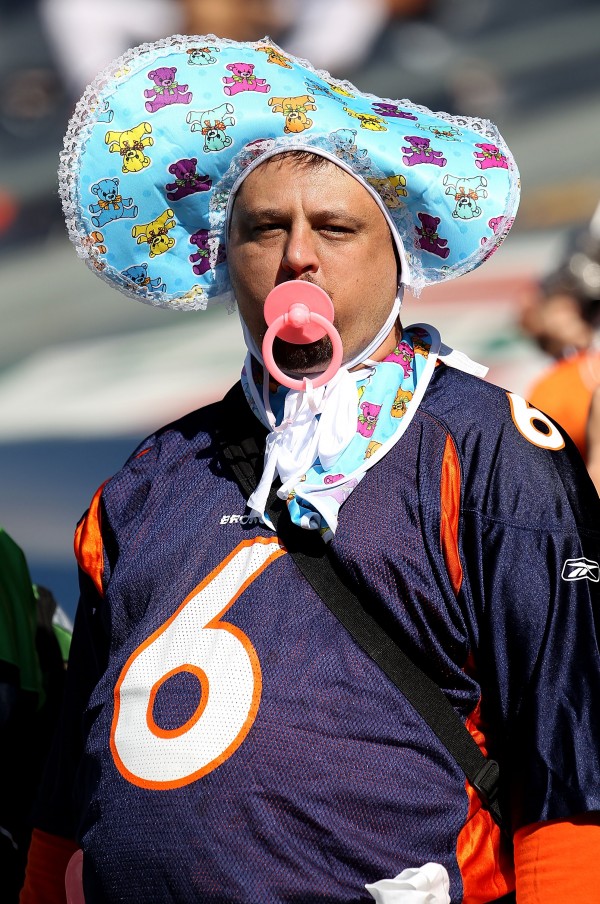 If anybody can shed some light on this outfit, please do. It really makes no sense with no background information.

It's a Jay Cutler jersey. So this can go one of two ways. Either this is a Cutler fan trying to send a message to the other team or he's making fun of Cutler for being a baby.

Let's be honest: the second scenario is much more likely. 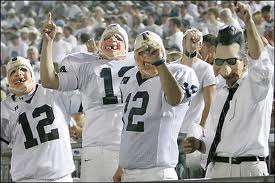 This is near the top of the creepiest sports fan outfits ever. Joe Paterno has to love looking into the stands and seeing that cartoonish mask of himself.

One problem that I have with this group ensemble is that each of the "players" is the same number. Why not mix it up, fellas? Unless I'm missing something, they're missing a great opportunity to shout out to some NIttany Lion legends. 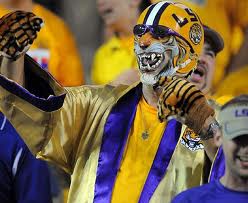 I'm going to give this fan more credit than he probably deserves. I'm assuming he's playing on the general perception that the SEC is the best football conference in the country, or the "heavyweight" conference, if you will.

Even if this isn't where this LSU fan was headed with his duds, he's crazy nonetheless. There is no way he can even see the action with a mask AND sunglasses on. 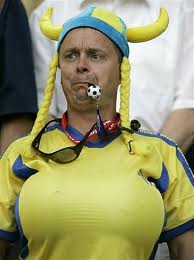 Can a picture be worth a thousand words and render someone speechless simultaneously? Yes, it can.

Exhibit A above brings so many disturbing thoughts to mind that it's impossible to get any of them out. There's no where to start or finish with this guy's (?) outfit.

I'm really not sure how this help's his team. I hope he never has the opportunity to explain it to me. 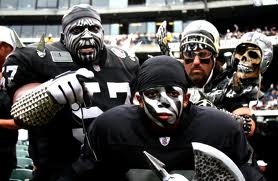 Father-son traditions can be great. So many dads teach their sons how to ride a bike, change the oil in their car and...dress like maniacs for a football game.

Father and son painted their faces and be-jeweled themselves top to bottom for a football game. It's the only logical way for the two to bond.

Seriously though, Raiders fans are intense. How many hours of preparation go into those outfits? 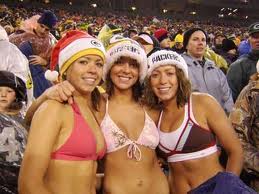 Theses ladies are taking one for the team, that's for sure. Wearing bikinis in sub-zero temperatures is literally insane. Hence, bikinis worn by Green Bay Packers fans are the epitome of crazy outfits.

Things should be a little nice in Forth Worth, Tex. this week at the Super Bowl if this trio is able to make it.

I know there is a Brett Favre joke here somewhere... 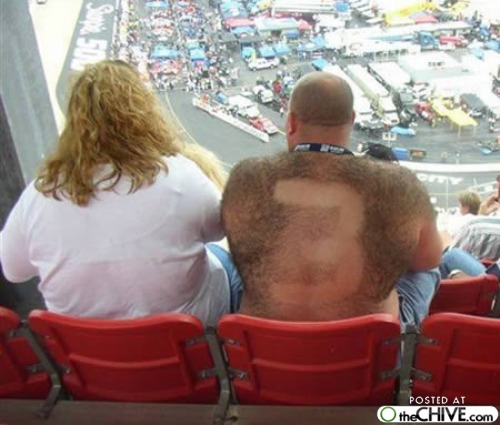 This NASCAR fan comes up with the craziest sports fan outfit of all. All it takes is a pair of jeans, insane amounts of back hair a wife with hair clippers.

And resilience against public humiliation.

I guess if you're rocking back hair like that, you either have to spend money to maintain it or just embrace it. Kudos, NASCAR fan, you've embraced in a shocking way.