20 Craziest Backboard Breaks of All Time 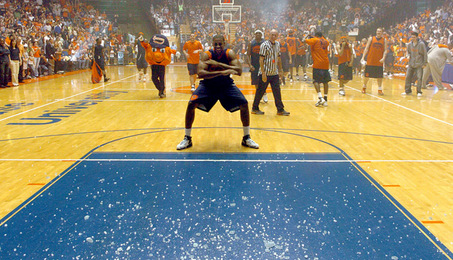 Dunking is one of the most entertaining parts in the game of basketball.

Sometimes though, dunking can get a little out of hand and players will literally break the backboards with the force of their shot, like former NBA player Rafael Araujo earlier this month. While this causes major damage to the court, fans really get a kick out of seeing such an awesome display of power.

Here is a list of 20 of the most awesome backboard breaks of all time.

During this 2010 high school basketball game in Grandville, Mich. one player goes up for a dunk, and ends up tearing down the rim and breaking the glass on the backboard behind it.

Judging from the cheers in the background of this AP video, that’s not something that happens very often on that court.

No. 19 Jimmy Kimmel Breaks the Backboard

While he may not be a great NBA player, Jimmy Kimmel got into the spirit of basketball during the NBA Finals last year. He set up a stunt that allowed him, just like Shaq and Jordan, to shatter a backboard.

The reactions of people watching his video of the stunt are pretty funny.

No. 18 Rafael Araujo Does It In Another Country

This former NBA player was at a game earlier this month for the FIBA Americas League. He went up for the dunk, and came back down with the rim and the glass from the backboard he had just shattered.

No. 17 Another Surprise Backboard Break

In this 2009 basketball game, player Jordan Miller goes up to dunk the ball and completely destroys the backboard in the process.

The players and fans all seem to be in disbelief, and not sure how to react to the awesome play that just happened.

No. 16 Mott College Player Cracks Board

Early last year during a game at Mott College, player Doug Anderson went to dunk the ball and score for his team. However, he may have used a little too much force, which caused the backboard to crack into a thousand tiny pieces.

Luckily though, the glass stayed in place and no one was hurt.

Here is a crazy video of LeBron James from back in his high school days. He goes up for the dunk and the rim completely detaches from the backboard dropping James to the ground.

In this 2008 video, a high school player goes up to dunk the ball in hopes of scoring for his team.

He managed to get his hands on the rim, but wasn’t able to put in the ball in the net.

As this is all happening, the weight of the player and the force with which he grabbed the rim, force the backboard to completely shatter.

No. 13 Oklahoma Vs. Gonzaga

In this 2009 game between Oklahoma and Gonzaga, a player from Gonzaga goes to shoot the ball and misses.

However that’s not the best part of the play. A defensive player from Oklahoma jumps up in an attempt to block the ball and ends up shattering the backboard.

No. 12 Shaq Breaks the Board

He looks a lot younger in this video, but Shaq goes up for what would be a sick dunk and ends up tearing down the backboard and falling flat on his back in this crazy backboard break.

No. 11 The Shattering Waterfall of a Backboard

In this video, a player goes up for a reverse dunk and completely rips the rim off and shatters the glass backboard in what looks like a waterfall of glass. It was a sick jump that resulted in an awesomely broken backboard.

During this 2007 basketball game, a player from Syracuse gets a nice assist from a fellow teammate and makes a great dunk, scoring for his team.

However, he uses too much force and literally brings down the entire backboard.

No. 9 Shaq Is Tearing Down the House

In this video, Shaq goes to dunk the ball and ends up not only breaking the glass and the rim to the backboard, but tearing down the whole structure itself.

During this college basketball game, one player gets a great pass from his teammate and goes up for the dunk, only to completely shatter the backboard with just one hand.

That must have been some force he put behind that jump to shatter the backboard like that.

No. 7 Devin Ham Goes Up for Texas Tech

During this Texas Tech University game, Devin Ham’s teammate makes a shot from the outside and misses, giving Ham the opportunity to grab the rebound. On the rebound, Ham slams the ball back into the net causing the rim to bend and the glass to shatter on the backboard.

No. 6 Broken Backboard Gets Game Called in Late Few Minutes

During this Jan. 8 basketball game, a player goes up to dunk the ball in attempt to score a few more points for his team before the game is over.

He misses, and the ball flies off to the right. However, between the force of the player's jump and how long he hung on to the basket after the failed dunk, he shattered the backboard and bent the rim, causing the game to be called, according to the description in this video.

In this old school video, Michael Jordan goes up to dunk the ball and ends up breaking the glass on the backboard, showering his opponents behind him in glass.

In this 2007 high school basketball game, a player has a free shot at the net, and goes up for the dunk, showing off a bit as he does. He spins a full 360 degrees, and then slams the ball into the net, demolishing the backboard in the process.

No. 3 Shaq Breaks the Backboard…again

It seems the Shaq has had an affinity for breaking backboards throughout his career in the NBA. Here is yet another video of Shaq completely demolishing a backboard.

This time, however, instead of just breaking the glass or tearing down the rim, he actually bends the structural pieces of the backboard causing the whole thing to collapse.

No. 2 Nigel Dixon Breaks It Down

In this 2007 Western Kentucky basketball game, Nigel Dixon gets open in the middle and then goes up for a sick dunk, where he completely shattered the glass of the backboard.

All players want to be the one to dunk a shot off of the rebound.

However, three players all jumping for the ball at the same time might be a bit much for one backboard.

In this video, three players go up for the rebound shot, and end up bringing down the rim and the glass of the backboard with them.