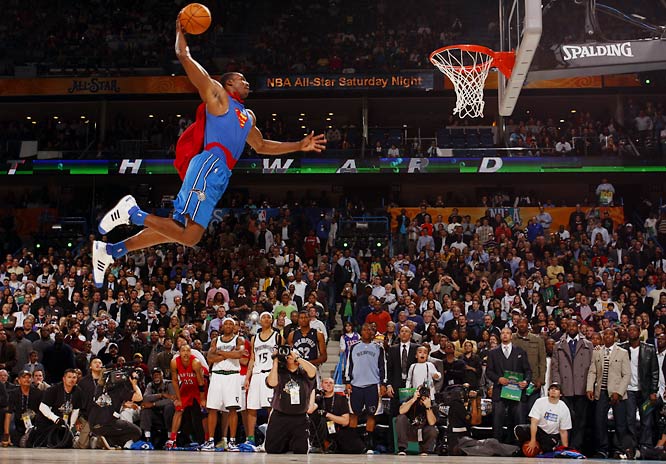 There have been a lot of great dunkers in the history of the NBA.

To narrow it down to just 10 was tough, but factors such as strength, athleticism, creativity, and hops were taken into account in creating this list.

Some big names were left off in favor of others, but that's the way it goes with a top 10 list.

Here are the top 10 dunkers for an all-time NBA Dunk Contest.

Jason Richardson won the 2002 and 2003 dunk contests when he was with the Golden State Warriors.

Despite being immersed in years of bad teams, Richardson was one of the most athletic players in the league during his prime.

Who can forget his off-the-backboard, between-the-legs dunk that brought the crowd to its feet? Or his impersonation of Dominique Wilkins with a windmill dunk?

Richardson was a joy to watch and may have won his third straight dunk contest in 2004 if it wasn't for controversial defeat to Fred Jones.

A list of names given to Chocolate Thunder's dunks: the Go-Rilla, the In-Your-Face-Disgrace, the Yo-Mama, and the Spine-Chiller Supreme.

As awesome as these names were, Darryl Dawkins lived up to every one of them.

His hops and athleticism, combined with his strength, were devastating for opponents.

When you rise so high that you actually have to throw the ball downwards, you can officially wear the Superman cape, which Orlando Magic forward Dwight Howard did many a time.

Not only does Howard have extreme creativity, his hops, strength, athleticism, and crowd appeal made him one of the best dunk contest contestants ever.

When you think high-flyer, you think Kobe Bryant, especially during his earlier years.

He doesn't have the strength of some of the forwards on this list, but he makes up for it by soaring like a bird through the air.

Bryant's athleticism and balance was unparalleled in 1997, and he demonstrated that countless times. To think, this was his rookie season.

I always laugh when people call him a small forward, despite his listing on the basketball court.

At 6-foot-8, 250 pounds, James is like a power forward with a shooting guard's athleticism.

That combination is oftentimes deadly for opponents, as evidenced by this video.

With apologies to Boston Celtics guard Nate Robinson, Spud Webb was the greatest little man dunker of all time.

At 5-foot-7, a man of that size should not be able to dunk a basketball. It simply defies physics.

I'm over six feet and I constantly hit the rim.

Dominique Wilkins won two dunk contests in his career, but his loss to Michael Jordan in 1988 will probably be the one he's most known for.

His dunks included his signature windmill, and an off-the-glass, one-handed tomahawk slam that brought the crowd to its feet.

Julius Erving is one of the players mentioned who began a new era of basketball, where dunking in an opponent's grill became more preferred than simply laying it up against the backboard.

Opponents of Erving's probably didn't know what to do when he flew at them.

Most learned to give him space and avoid getting posterized.

He participated in the first NBA Slam Dunk Contest ever in 1984 against Larry Nance.

One of his most popular dunks was a slam where he jumped up high enough to hang on the rim at his elbow.

Toronto Raptors teammate Tracy McGrady had the pleasure of facing Carter in the contest.

As he puts it, "When you see some of the greats in our league just in awe of what he did, then you know you're in trouble."

Kinda could see this coming, couldn't you?

Michael Jordan was nicknamed "His Airness" for good reason. He could get some serious air.

His performance against Dominque Wilkins in 1988, complete with a dunk from the free throw line that has been copied numerous times since, was one of the great dunk contests ever, if not the greatest.

Jordan's athleticism, hangtime, and creativity for that period of time gives him the No. 1 spot.

He earned a perfect score of 50 seven times in his three years performing in the dunk contest; the record still stands to this day.