Iowa football has undergone an intense scandal over the last few days—involving drugs, player suspensions and players leaving the team. All of this comes as the Hawkeyes prepare for the Dec. 28 Insight Bowl in Tempe, Ariz. where they'll take on Missouri.

The story begins with Derrell Johnson-Koulianos being dismissed from the Iowa football team following an investigation into possession of drugs, according to the Kansas City Star. Last week, Johnson-Koulianos faced charges of possession of cocaine, marijuana and other prescription drugs in his home in Iowa City. Johnson was also accused of selling marijuana, reported the Associated Press.

The wide receiver is the Hawkeyes' career leader in receptions and receiving yards and was a first-team All-Big Ten selection this year.

College Football Fantasy Insider reported today the rumors in the form of online message board and Twitter updates that as many as 11 Iowa football players could face suspension after a random drug testing of the team.

While rumors flared, the Iowa Press Citizen reported that at least one more Hawkeye may be on his way out. Following the confirmed request for release of scholarship by Brandon Wegher Friday, messages on Facebook from Jewel Hampton read: "Former Hawkeye!!! Wats (sic) next???"

According to the Iowa Press-Citizen's Hawk Central blog, fellow Iowa running back Adam Robinson replied to Hampton's message, saying: "LIVE IT UP!"

The Hawk Central blog also reached Iowa's associate director of athletics Fred Mims for a hopeful confirmation on the dismissal of Hampton. Mims said he had not received a request for a scholarship release from Hampton.

A press release is expected today from the University of Iowa. Ferentz is slated to hold a press conference later this week. 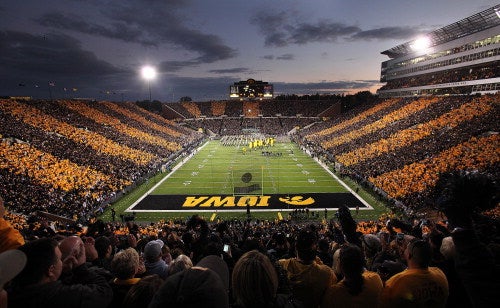