Ride 'Em Cowboy: Why This Was The Best Season in Oklahoma State Football History 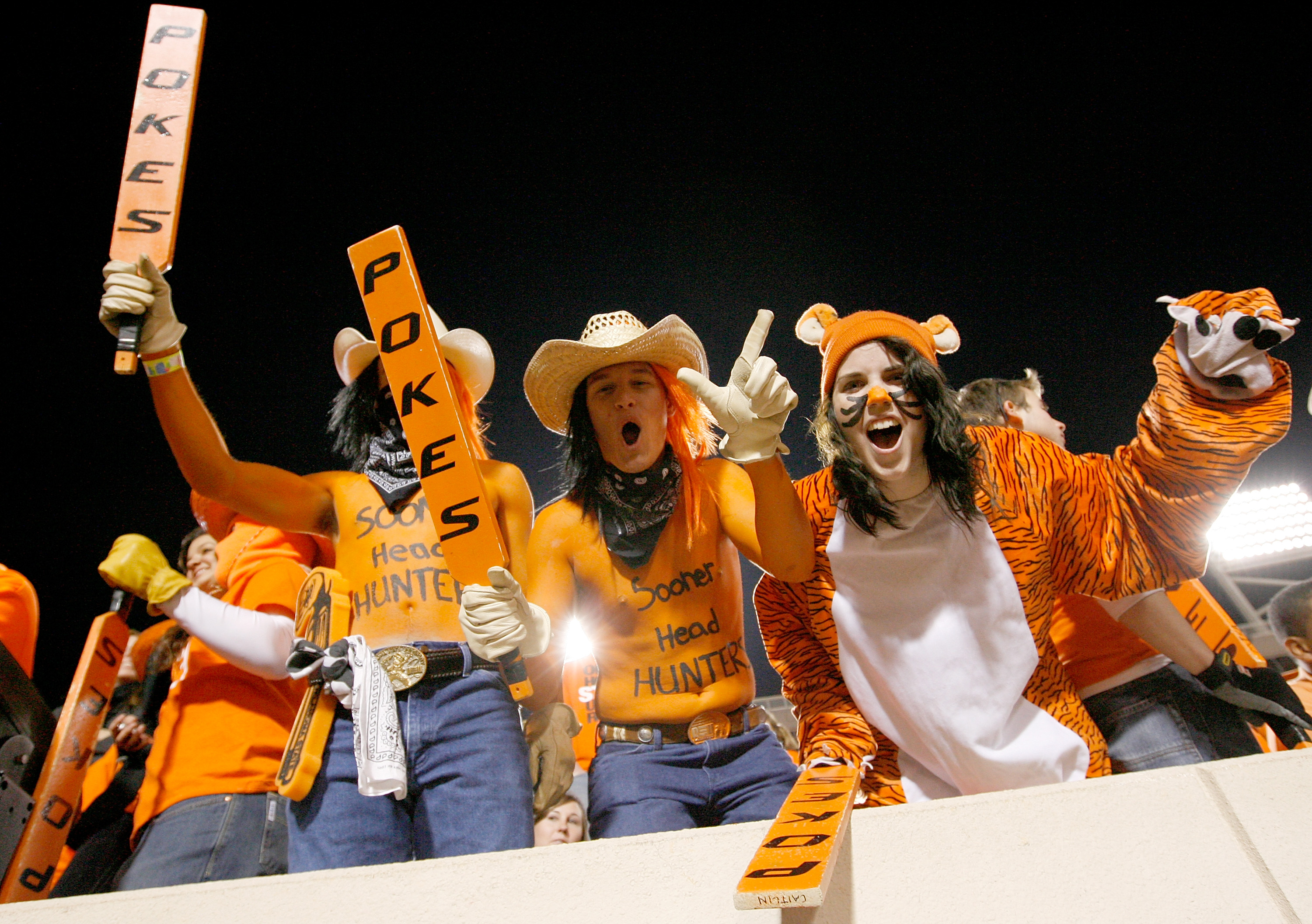 Although the Oklahoma State Cowboys won't be playing for a national championship this year, this team was the best in school history.

The season featured one of the most deadly offenses in the nation and week in and week out, the Cowboys gave their fans a reason to get out of their seats.

Here are 10 reasons why: 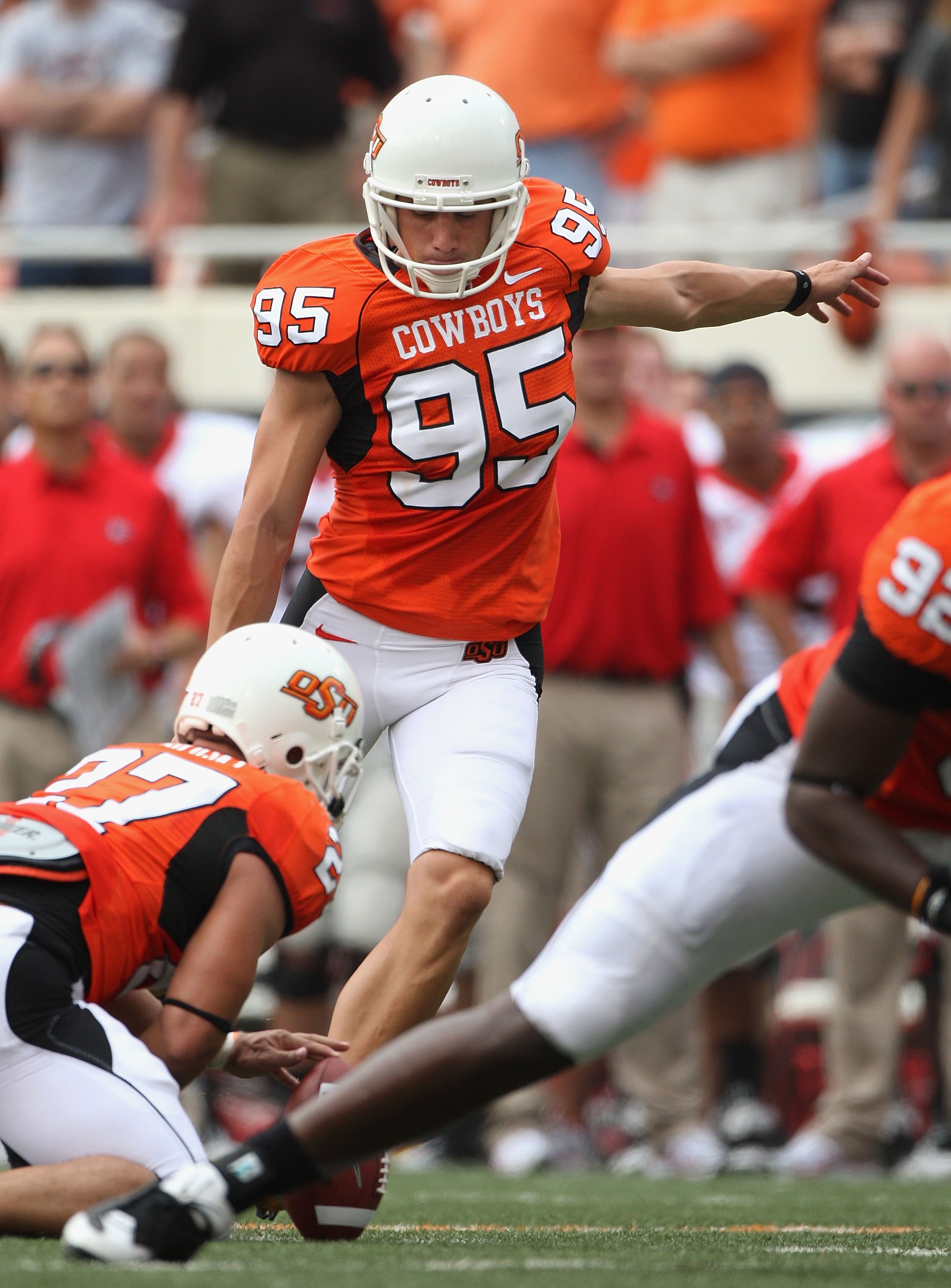 Dan Bailey: Bailey knocked down 24 of 28 field goals this year (8 of 10 from 40+) and hit 65 of 66 extra points, his one miss being the only miss of his career. Bailey totaled 137 points for the Pokes and was awarded the Big XII Special Teams Player of the Year.

Orie Lemon: After missing his entire senior year with injury, MLB Lemon returned to the Cowboys as a fifth-year senior and became the leader of the defense. 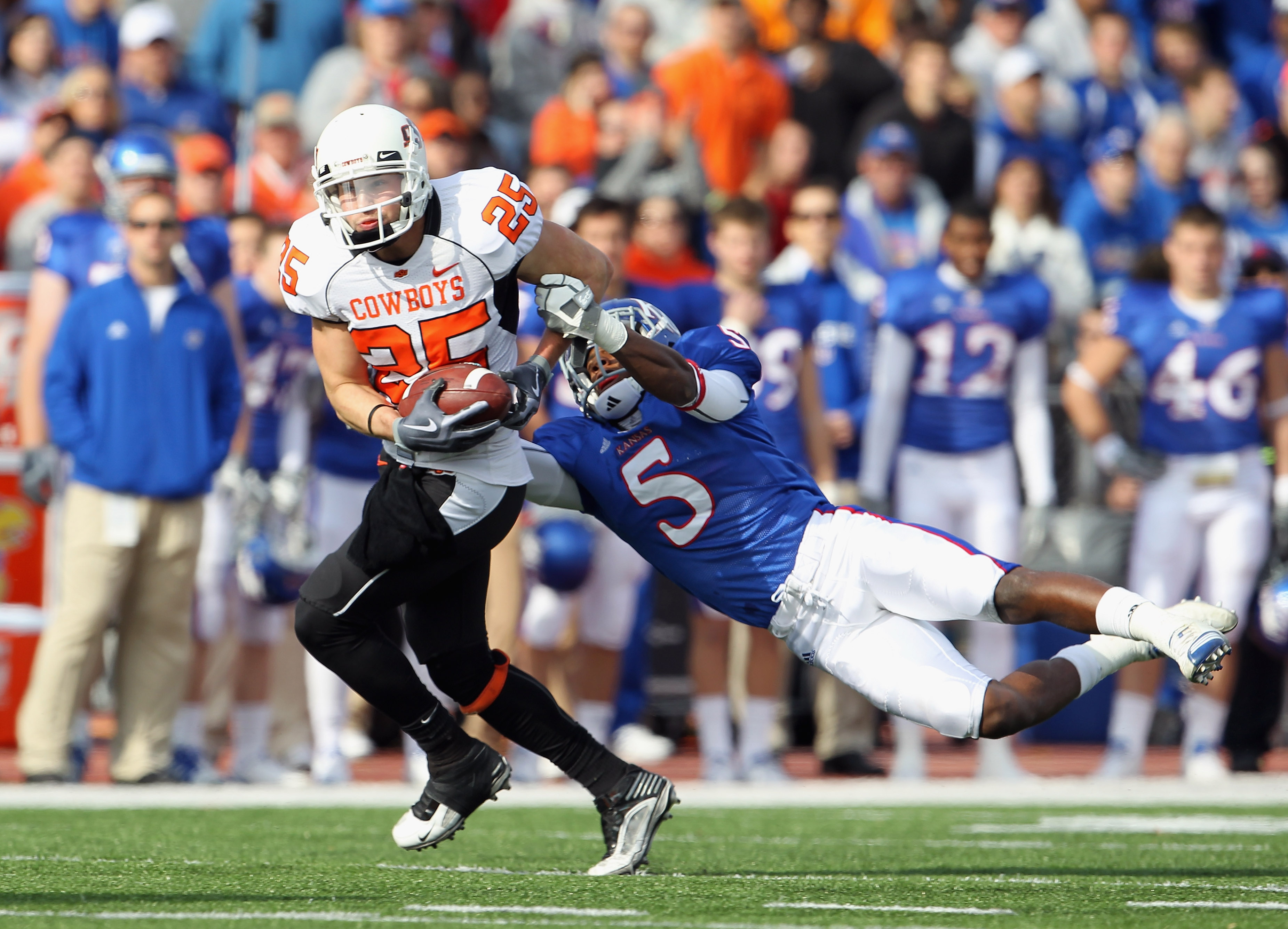 Brandon Weeden was already putting up big numbers before this game. The problem was that Justin Blackmon was receiving most of the targets (an example being 157 of Weeden's 283 yards belonged to Blackmon against Nebraska).

Then a few days before OSU's matchup against Kansas State, Blackmon was arrested for a DUI and subsequently suspended for the game.

This proved to be a blessing in disguise as we were introduced to the rest of OSU's receiving corps. Weeden, as well as the coaching staff, gained trust in receivers such as Bo Bowling, Michael Harrison and Josh Cooper (pictured playing against Kansas). From that game forward, there were viable threats across the offensive line. 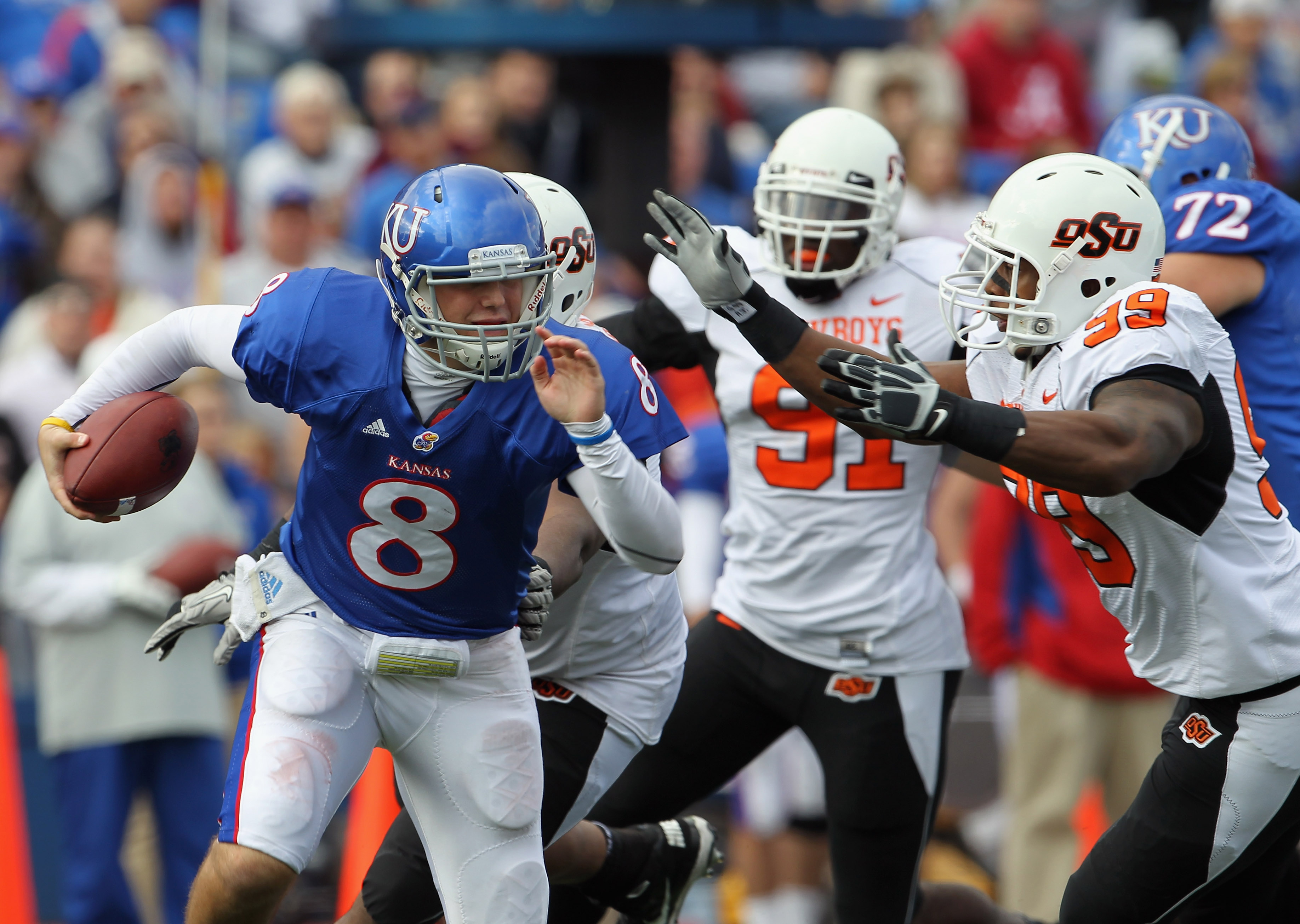 The addition of Bill Young as defensive coordinator in 2009 was monumental in the improvement of the 2010 Oklahoma State team.

Although the Cowboys were ranked 67th in points against per game (27.8) in, one must realize many of those points were scored in waste time when the game was well in hand and the second string and, in some cases, third string players were in the game—see Tulsa.

The Cowboys beat the Longhorns in Austin for the second time in school history—the other occasion being in 1944.

OSU also defeated Texas Tech in Lubbock for the first time since that same year.

Add to that victories over Baylor and Texas A&M, what do you get? The first sweep of the Texas schools since the formation of the Big XII. 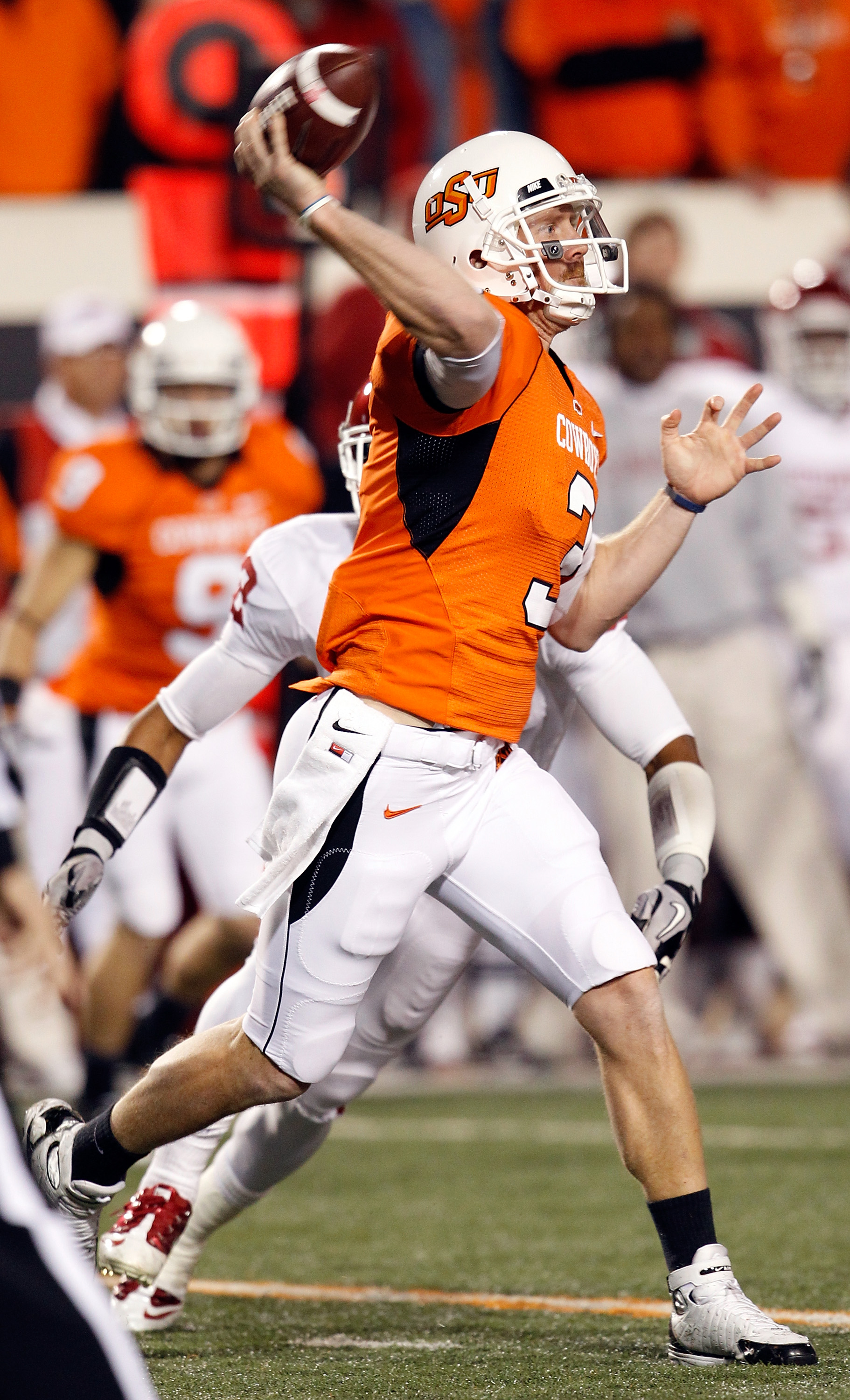 When the New York Yankees pitching prospect had an injury that ended his baseball career, Brandon Weeden went back to the man who recruited him out of high school. Head Coach Mike Gundy didn't think twice about letting the 24-year-old walk on the team.

Fast forward 3 years and you have one of the most dangerous quarterbacks in college football.

Weeden threw for over 4,000 yards and 32 touchdowns with a 67% completion rate in a stellar junior year, and in the process broke the school record for yards in a game with 435 against Baylor.

And it gets better OSU fans: he's back next year.

This was the most entertaining game of the season for the Cowboys and arguably one of the best throughout college football.

This game was filled with enough dynamic plays, momentum swings, and scoring that no one could have walked away from Boone Pickens Stadium disappointed with the efforts of both teams.

The OSU defense intercepted three Landry Jones passes, one Shaun Lewis took to the end zone for six points and Broderick Brown's unbelievable play to set up Lewis's second interception will be on highlight reels for years to come (side note: Lewis was awarded the Big XII Defensive Freshman of the Year). And not to mention Justin Gilbert's kick-off return for touchdown.

The only problem? The Cowboys lost.

After beating Georgia to begin the 2009 season in fine fashion, the Cowboys were quickly brought down to earth by the high-scoring offense of Houston.

The mastermind of the Houston offense? Dana Holgorsen.

Holgorsen was brought on to the OSU coaching staff as offensive coordinator and brought his high scoring playbook with him.

The Cowboys averaged 547 yards per game during the regular season and nearly 45 points per game, the third most in D-1 college football. 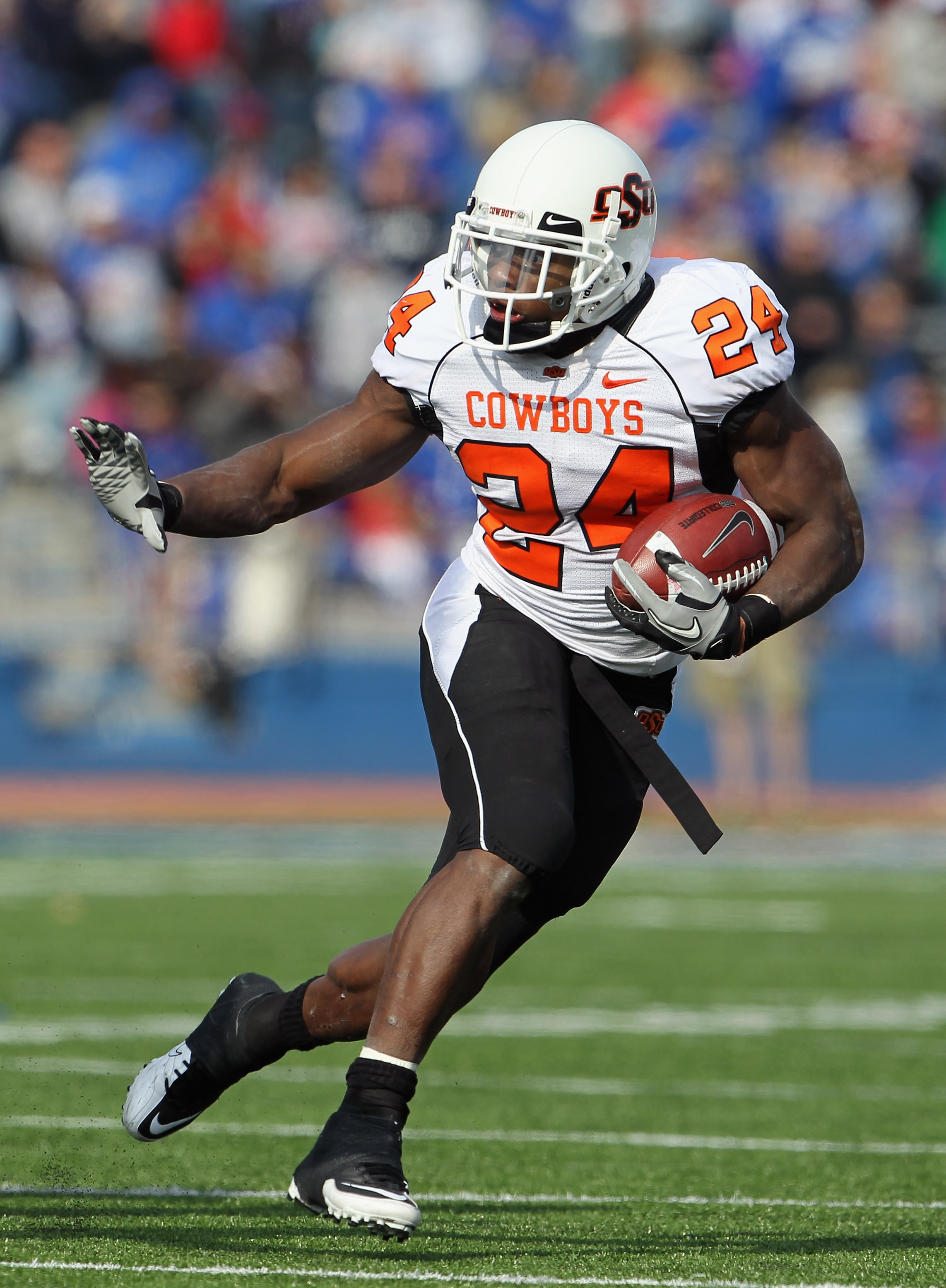 After missing most of his junior season with injury, Kendall Hunter returned to the excellence he displayed in his sophomore year.

In his senior campaign, Hunter gained 1516 yards on the ground this season and collected 16 touchdowns.

Nearly every game, Hunter ran right up the gut of opposing defense, used the truck stick, and always gained the extra yardage that was available.

At times this season, Hunter showed flares of the most prolific OSU running back ever, Barry Sanders, by running for 257 yards in the season opener against Washington State and 201 yards against a very good Nebraska defense.

Hunter's on the field excellence did not go unnoticed as he was named an All-American.

Hopefully next year, we'll be seeing him bowling over NFL players. 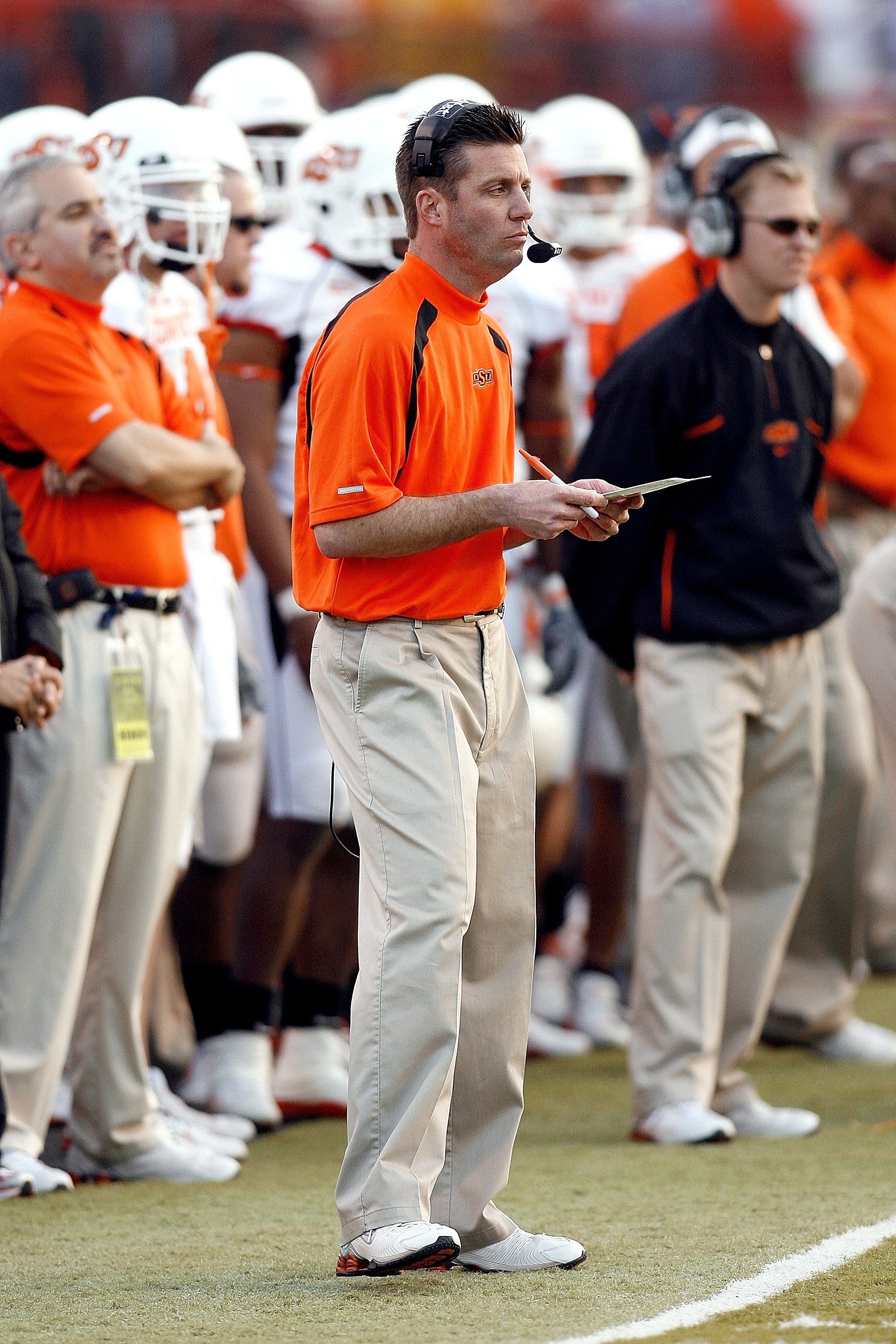 Gundy was able to take a team projected by many to finish fifth or sixth in the Big XII South and turned them into the number 14 team in the BCS.

Although they didn't win the the South, they showed not only the Big XII, but also the nation that this is a team to look out for in 2011.

And this was supposedly a rebuilding year.

When Dez Bryant left OSU to the NFL, and ultimately the Dallas Cowboys, many figured Hubert Anyiam to be the number one receiver. That didn't quite pan out.

Blackmon settled into the role of jaw-dropping receiver with ease. In every game this season, Blackmon racked up over 100 yards and had at least one touchdown reception.

With his uncanny ability to make the tough catch combined with his breakaway speed, Blackmon finished the regular season with 1,665 yards receiving, 18 receiving touchdowns, a 69 yard rushing touchdown, and for good measure, a punt block that he returned for a touchdown.

His name has been included in Heisman talk the whole season (there's no chance) and is up for the Biletnikoff Award (there's a good chance).

This guy did it all and was rewarded with being named an All-American as well as the Big XII Offensive Player of the Year, the first wide receiver to do so. 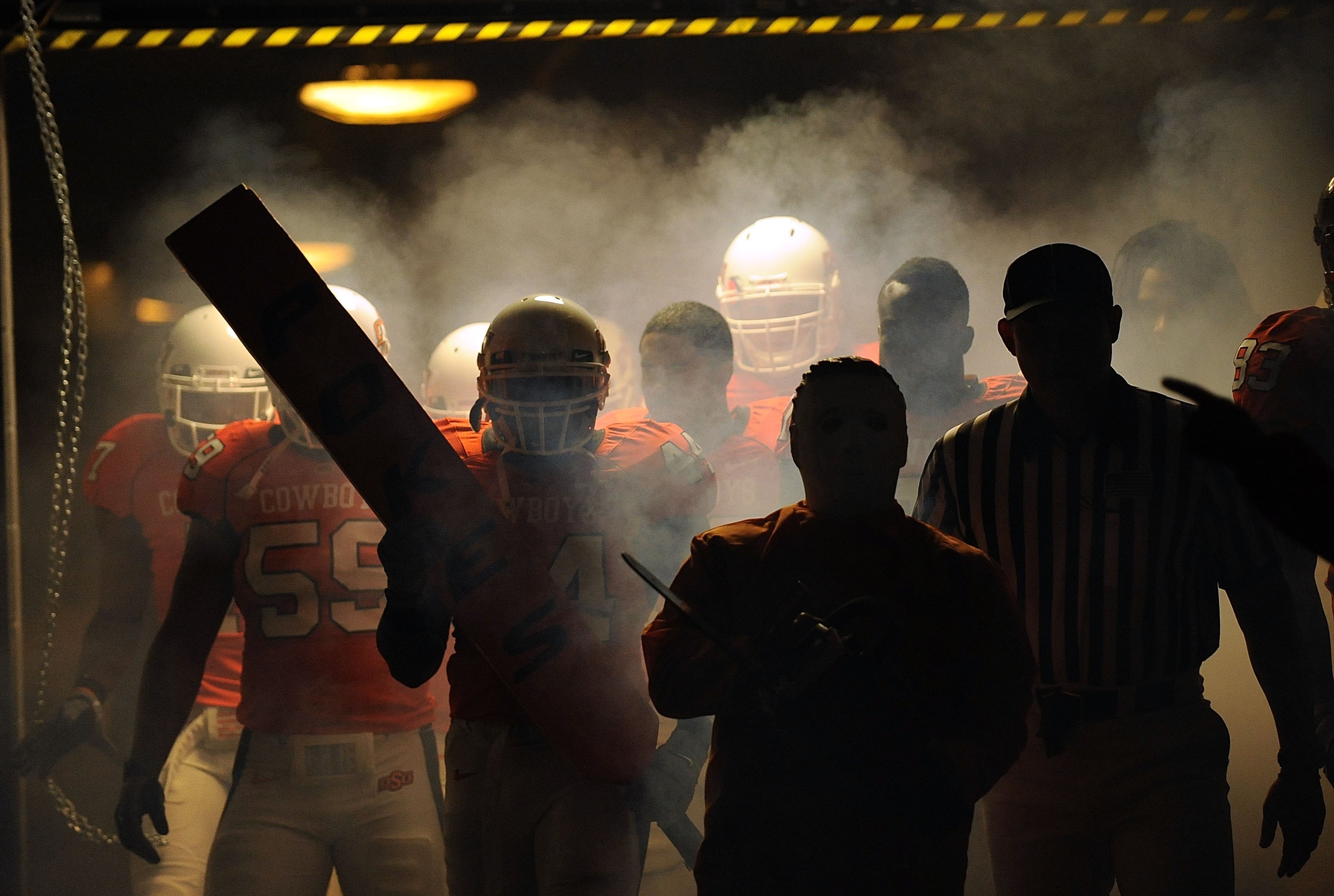 It's the best record since 1988 when Sanders was carrying the ball for over 2,000 yards and Gundy didn't have the headset on, but rather a helmet at quarterback.

It's also OSU's best record since the formation of the Big XII.

With the majority of the lineup returning next season, the 2011 edition of the OSU football team has the potential to be even better than this year's.