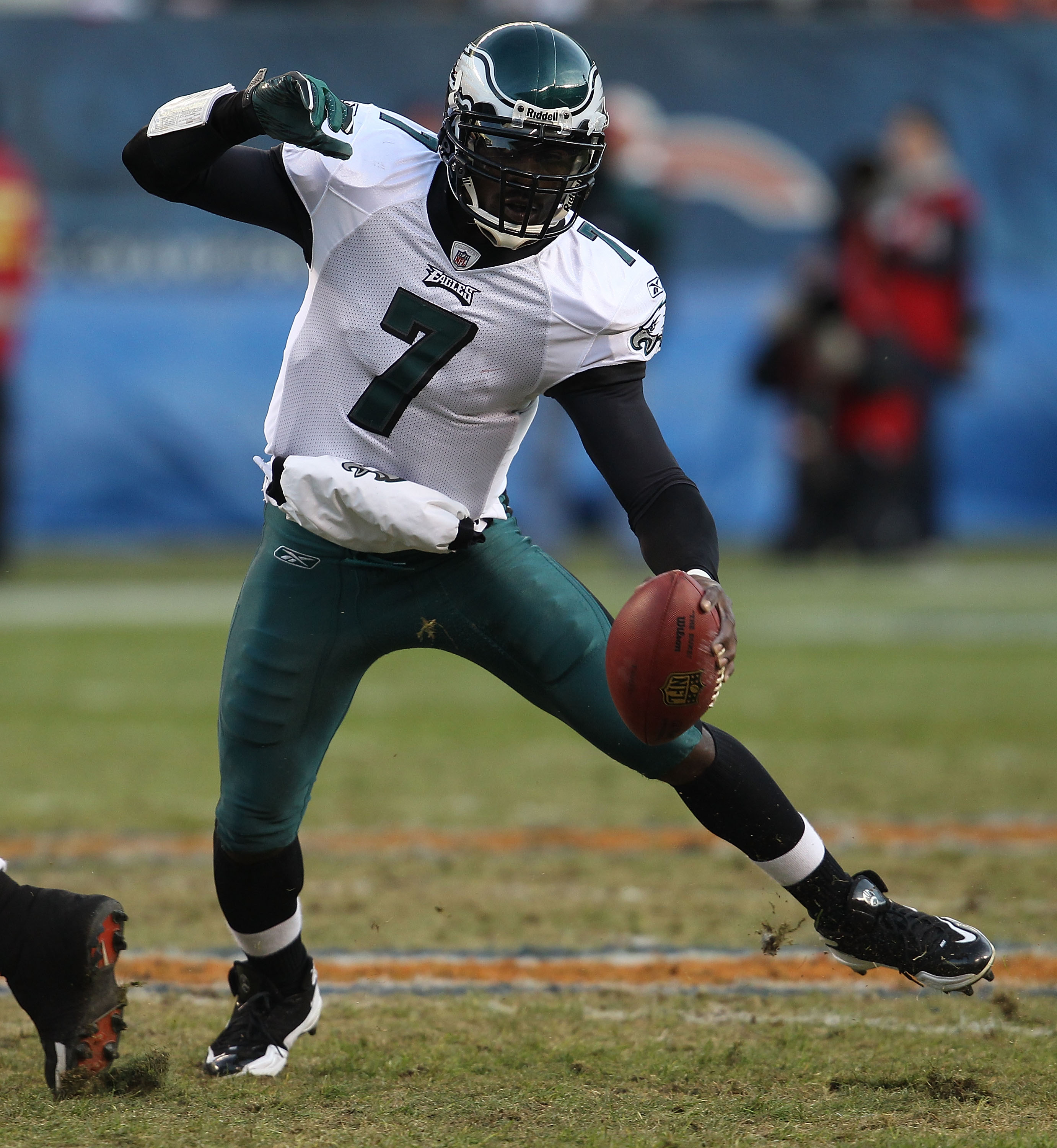 The 2010 NFL season has been a campaign featuring a lot of parity around the league. Consider that none of the NFL's eight division leaders has more than a one-game lead, and five of the eight divisions see two teams tied for the lead.

In the much more subjective MVP race, there are many individuals having great seasons, but there's not the singular Cam Newton-esque frontrunner. (Auburn's Cam Newton, barring more details of a scandal scaring off voters, should easily garner the Heisman Trophy on December 11.)

Back to the NFL MVP race:

Five regular-season games remain for each team (well, six are left for tonight's Monday Night Yawnfest combatants, but frankly, who cares?), so almost one-third of the season still hangs in the balance.

Will the Philadelphia Eagles' Michael Vick—arguably the most dynamic and controversial player in the league—top the chart?

How about Gisele Bundchen's husband, who is having a pretty fine year in New England?

This analysis is based on more of a "should win, as of now" than a "will win" perspective.

A Look at Past MVPs 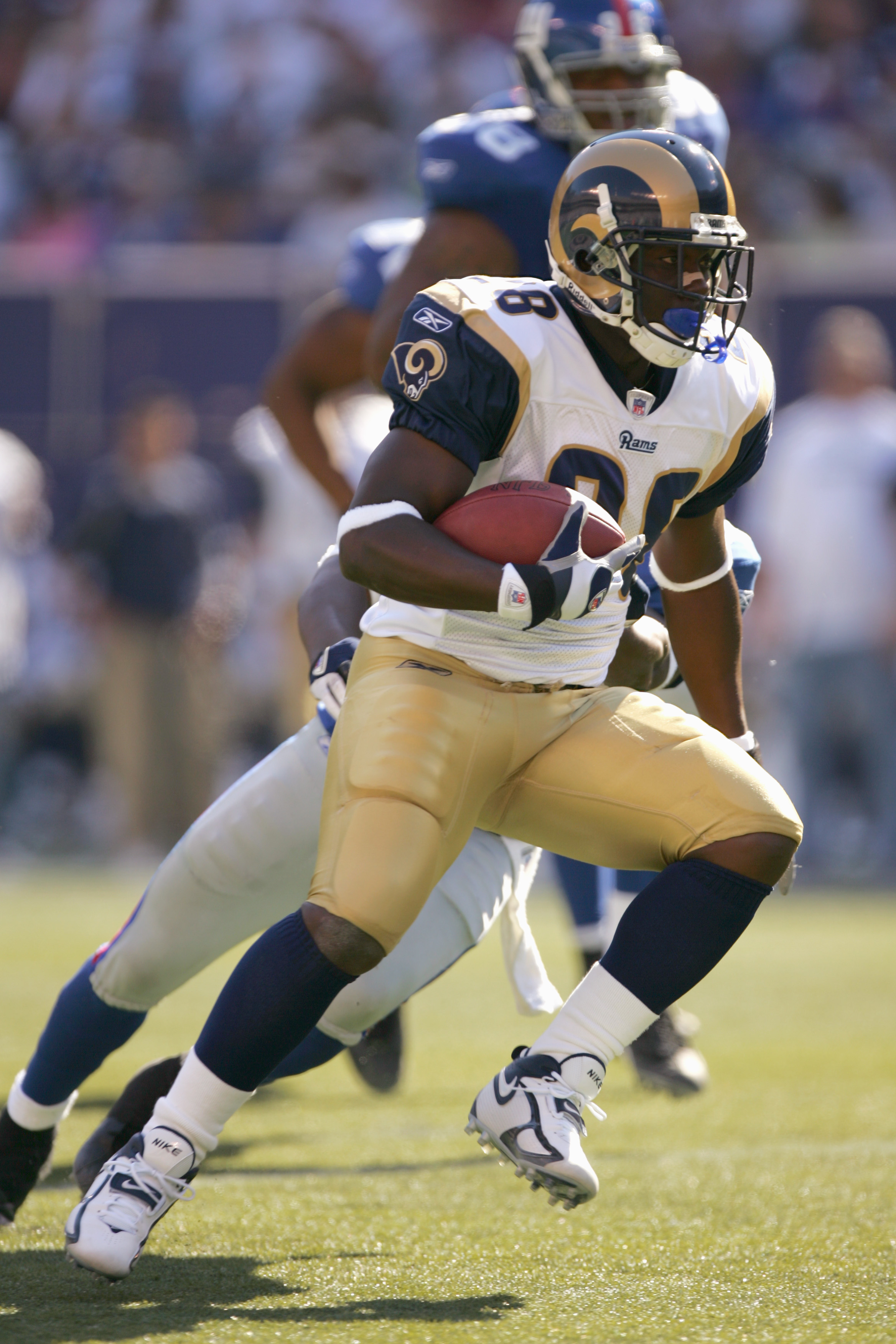 It is clear from studying the last 11 MVPs (using the AP award), that quarterbacks are the clear favorite for the award. And if it's not a quarterback, then a running back is likely to win.

Otherwise, Kurt Warner has won it twice, Peyton Manning three-and-a-half times with the other half going to the late Steve McNair, and Rich Gannon and Tom Brady have both taken home the hardware.

Are you looking for a wide receiver? Well, keep looking. The incomparable Jerry Rice took home most of the postseason awards in 1987, but lost the AP vote to John Elway.

That's about it for the last 50 years, and the only offensive player other than a quarterback or a running back to take home the award since 1970 was Mark Moseley (a placekicker) in the strange 1982 season.

If you're looking for a defensive player, you won't see too much here.

All this does not suggest that I am only looking at QBs and RBs, but the NFL is increasingly a quarterback's league, and any list should reflect that. 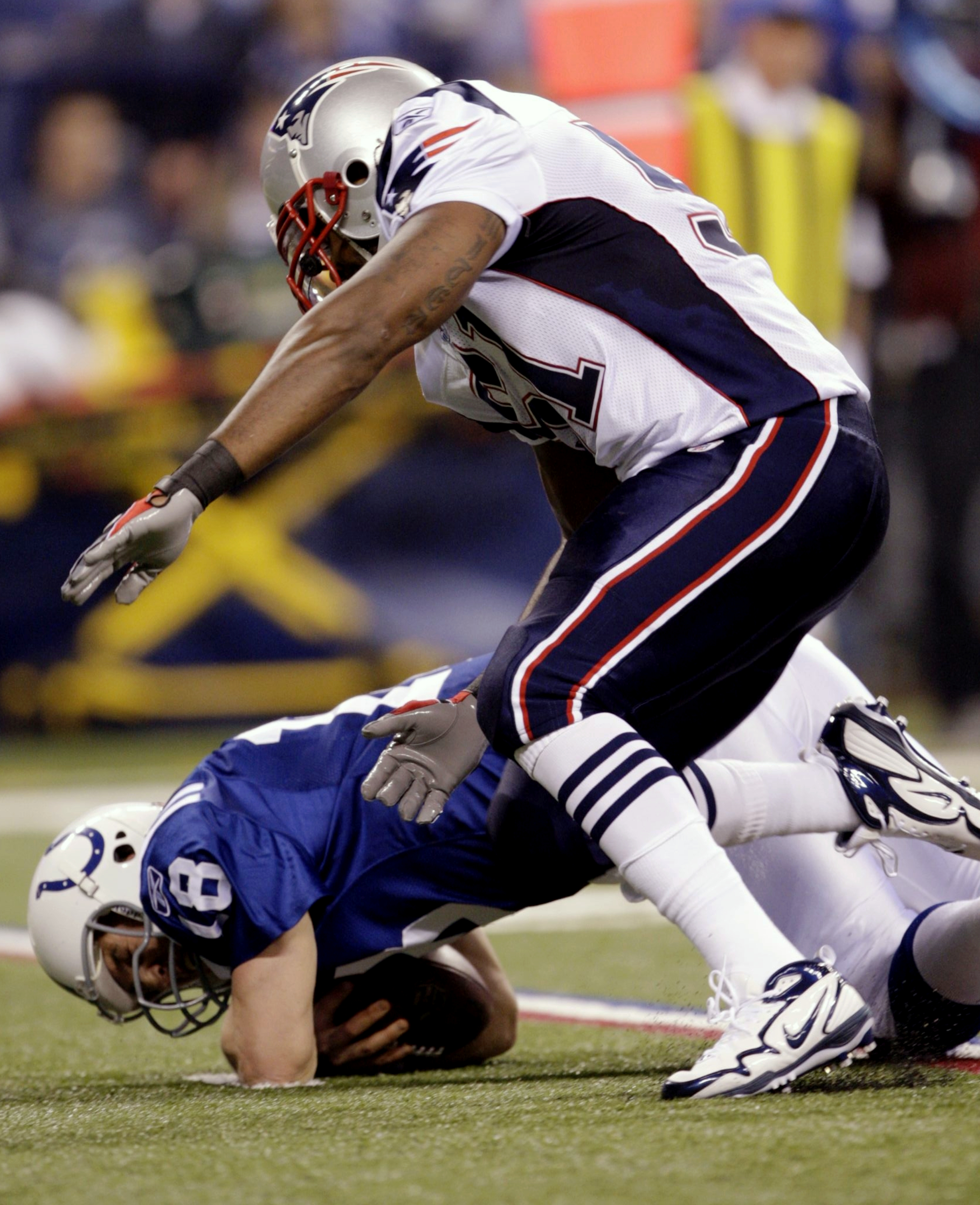 Among those who do not make my current Top 10 but aren't too far from consideration are the following defensive players:

Giants DE Osi Umenyiora and the Steelers' rogue LB James Harrison both rank very high in both sacks and forced fumbles, and the Eagles' Asante Samuel (with seven interceptions, and maybe that many true tackles) deserve some mention.

Running back Peyton Hillis (Browns) has become the all-everything workhorse for the Browns, while Adrian Peterson is quietly running ferociously while not succumbing at all to the fumble-itis that has plagued him the last couple years.

And there's only room for so many quarterbacks, but the Jets' Mark Sanchez and the Bucs' Josh Freeman continue to have excellent, and clutch, sophomore years.

Peyton Manning? There, I mentioned him, but is he even a Top 15 candidate right now?

So, who did make it? 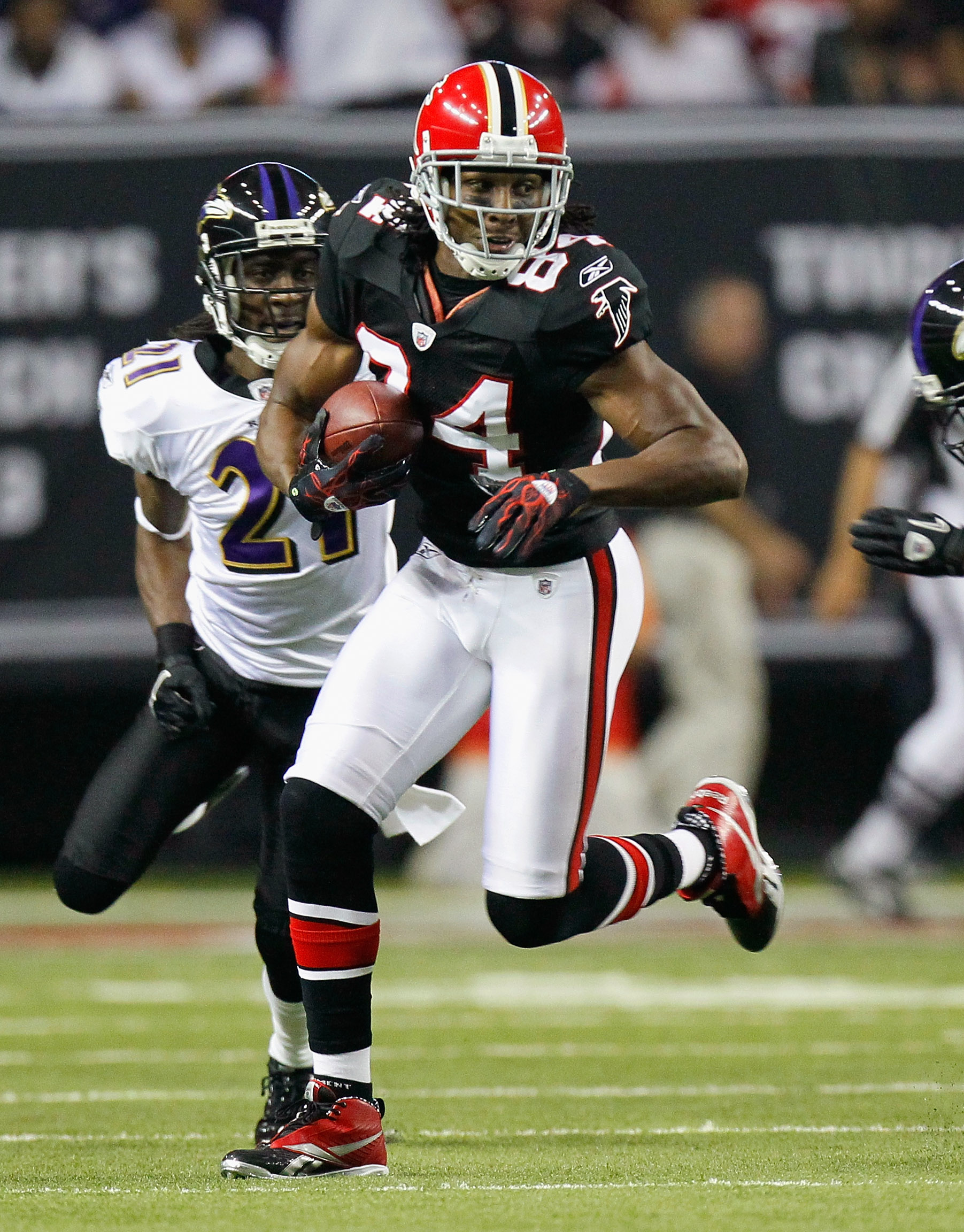 Wide receivers don't get that much respect in MVP voting, and perhaps I'm continuing that trend here.

Having said that, Kansas City's Dwayne Bowe has 58 receptions for 885 yards and a league-leading 14 touchdowns. He is Matt Cassel's favorite target—especially in the red zone—and a big reason why the Chiefs are leading the AFC West.

The NFC South-leading Atlanta Falcons are getting a career year out of six-year veteran Roddy White, who leads the NFL with 84 catches. He is second among receivers in yards (1,066) and tied with the Broncos' Brandon Lloyd with 54 receptions that resulted in first downs. 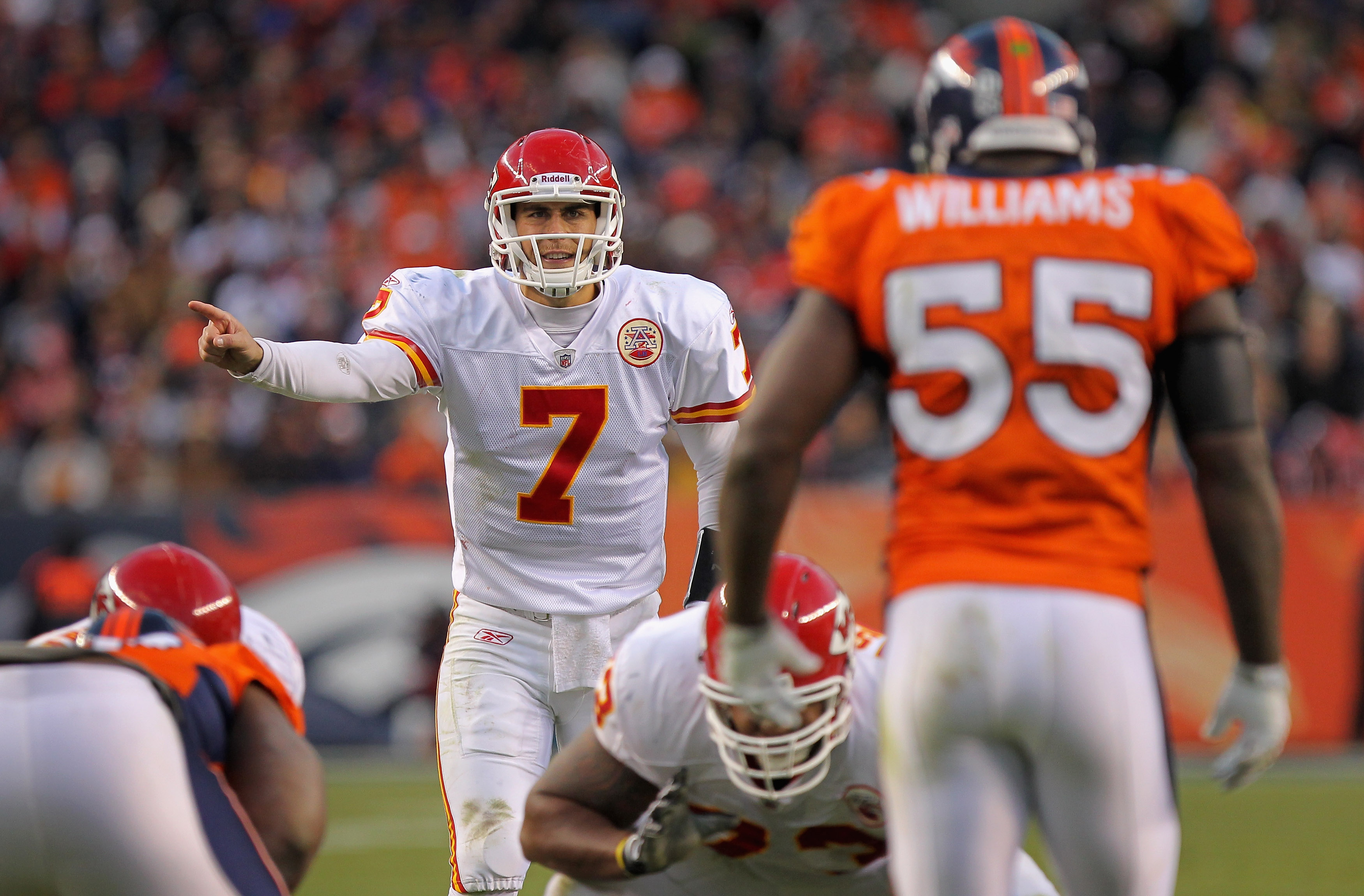 Is Matt Cassel a great quarterback?  I would say not, but he's certainly getting the job done this year for the surprising 7-4 Chiefs, who are (for now) leading the AFC West.

Cassel is more of a game manager (he only averages 210 yards per game through the air) but has been remarkably mistake-free this year, throwing 22 touchdowns while only throwing four picks.

If the Chiefs shock everyone and hold off the surging Chargers to win the AFC West, he should at least merit Top 10 consideration this year. 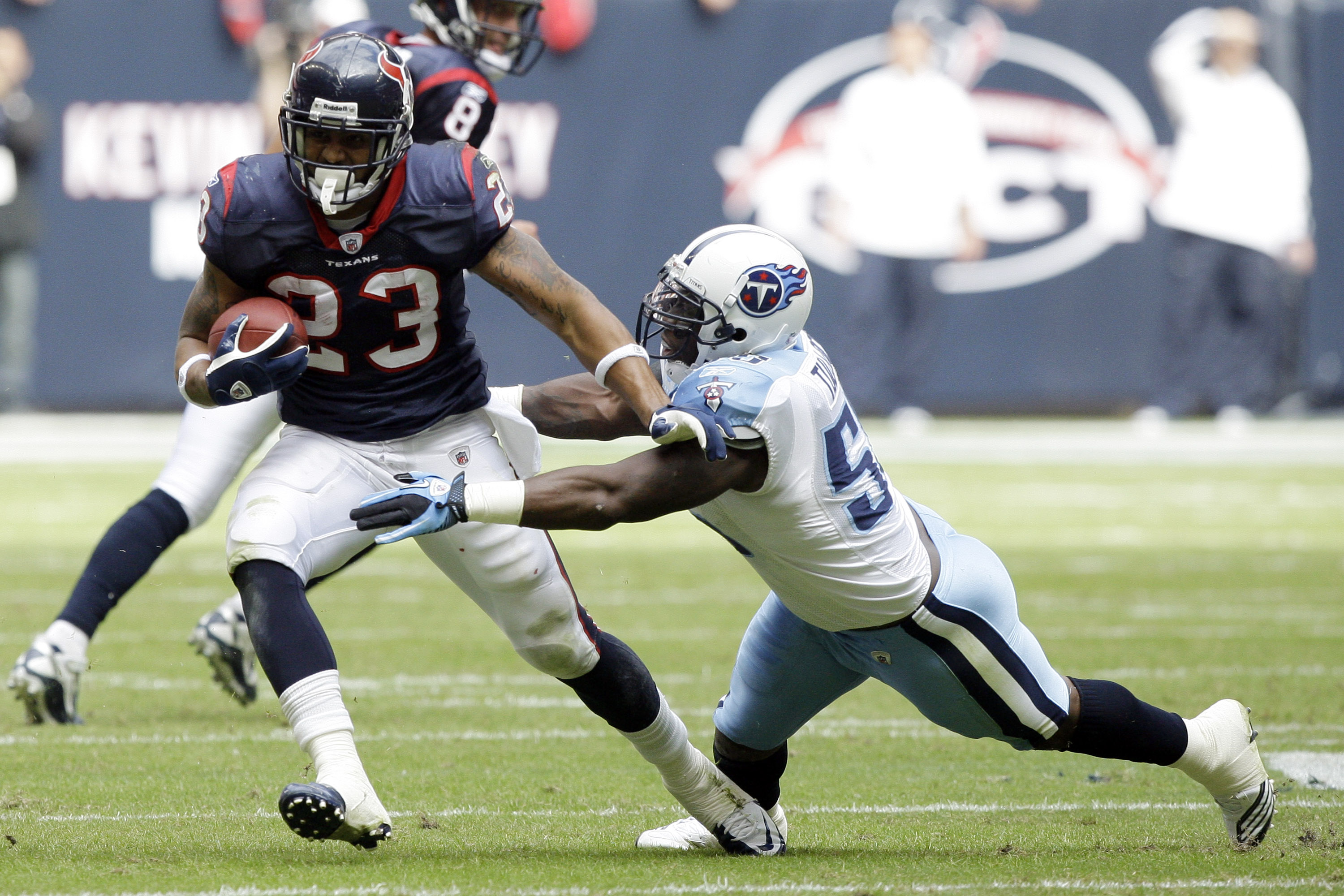 Houston's Arian Foster is a second-year back out of Tennessee who very few casual fans even heard of before this season. Indeed, he was undrafted out of college.

In a season where little has gone right for the Texans so far—although at 5-6 they are only one game behind the Colts and the Jaguars in the mediocre AFC South—Foster has had a huge year.

He is leading the NFL in rushing yards (1,147) and touchdowns (12) and does so with 5.1 yards per carry.  He's also a very reliable target out of the backfield and ranks high among running backs with 48 receptions for 453 yards.

Jamaal Charles ranks second in rushing yards with 1,021, a number achieved with only 161 carries. His 6.3 yards-per-carry average looks like a misprint for an NFL back.

Okay, let's move on to the quarterbacks... 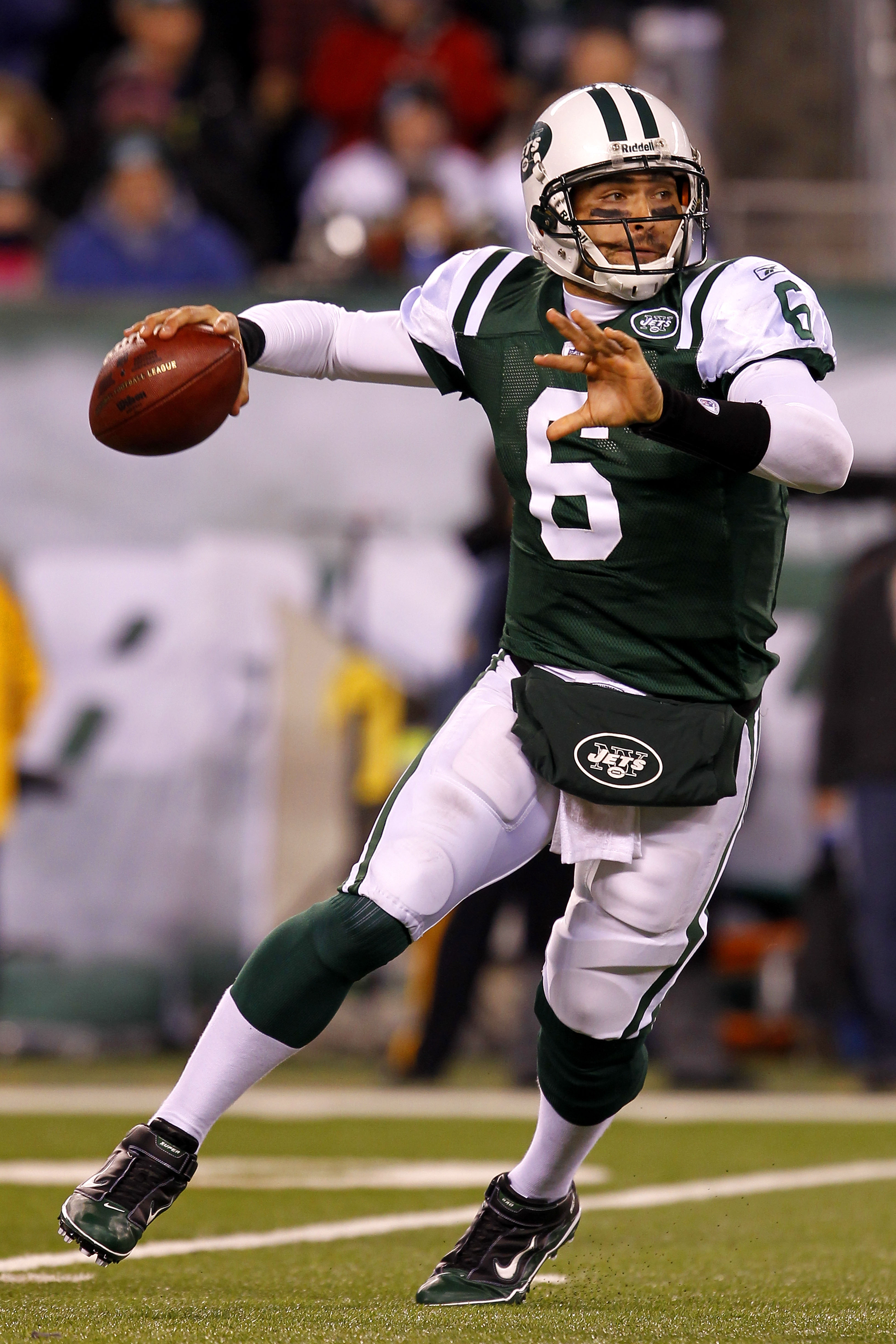 Okay, perhaps, none of these guys deserve to be ranked ahead of those already on my list, but let's just say that:

A) Tampa Bay's Josh Freeman continues his fine play and leads the Bucs to a playoff spot nobody outside their compound would have projected.

B) Mark Sanchez shows his rookie year was no fluke, keeps getting better and maybe leads another fourth-quarter comeback or two. And if the Jets win the AFC East...

In those cases, would either or both of them merit Top 10 consideration? Absolutely.

2) Peyton Manning has dropped out of my Top 10 after his last three losses, and pedestrian, at best, performances. But if the Colts hold onto the division lead, he will still get a lot of votes. 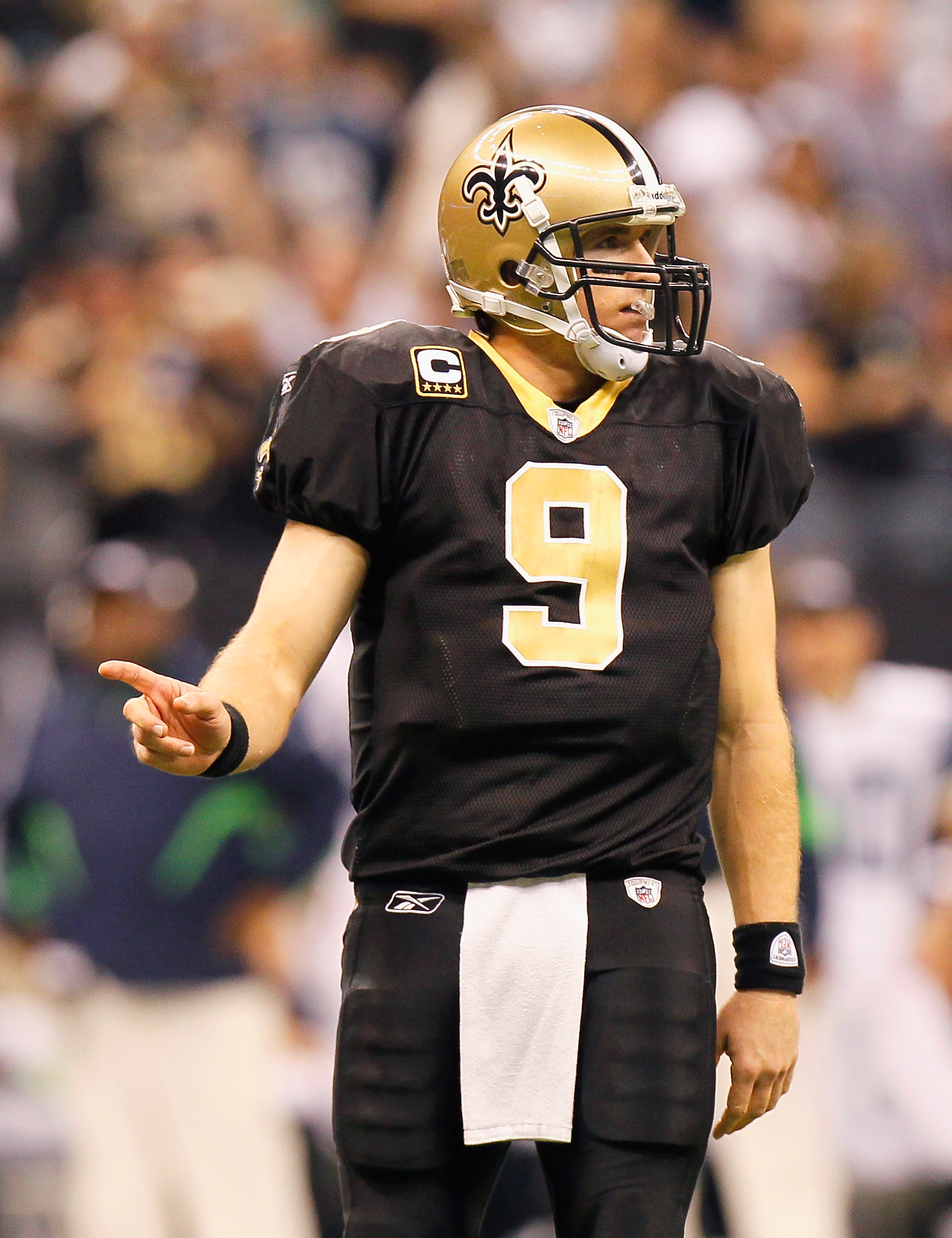 Believe it or not, Drew Brees is actually throwing for more yards per game this year than in his magical 2009 campaign, and I would have voted for him to win the MVP last year.

But, and these are big buts (that's one "t", thank you), his yards per attempt is way down this year, and his INTs are way up.

Having said that, Brees is the unquestioned leader of an 8-3 team that has won its last four games. They have no running game to gush over, but No. 9 is starting to heat up for the stretch run. Brees is tied with three others for the NFL lead in TD passes with 23. 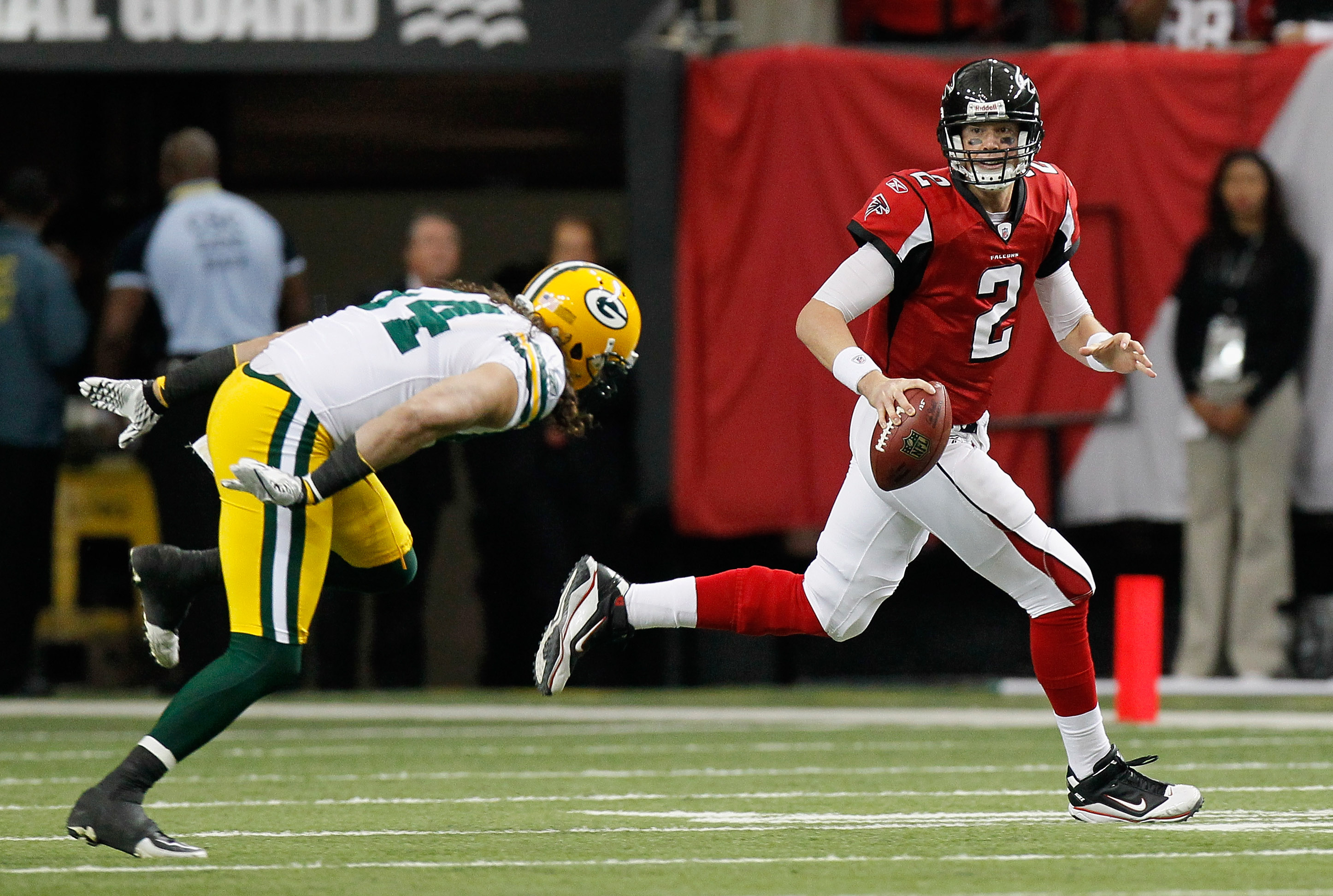 Matty Ice, as he is affectionately known, is having a terrific third season, leading his Atlanta Falcons to an NFC-best 9-2 record.

Statistically, he's much more solid than spectacular. Ryan does not wow you; he just wins games, and seldom makes a crucial mistake.

I think of him as more than a game manager, as he does have a penchant for making the right read and the right throw at the right time. 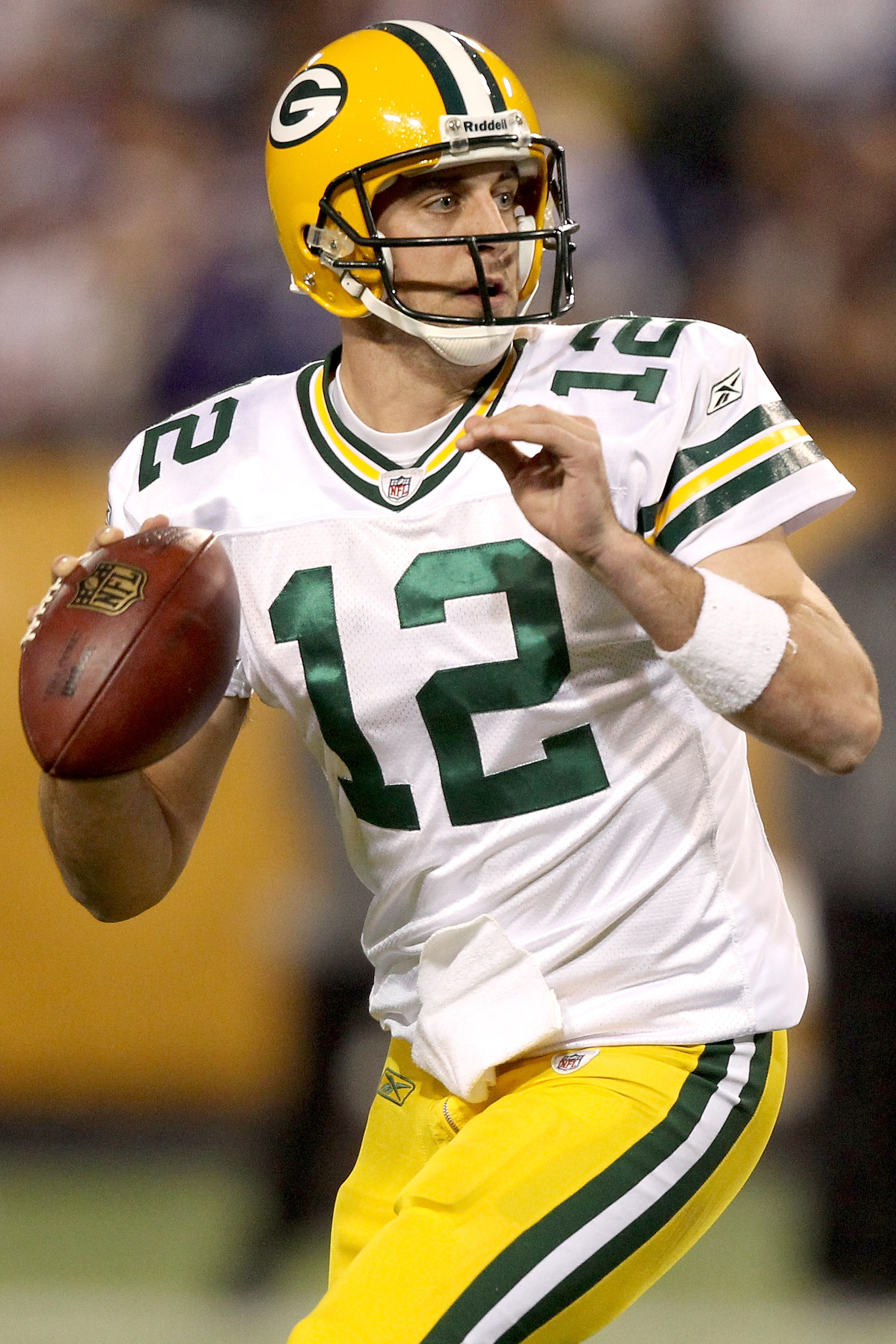 Falcons Nation may not be pleased that I have ranked Rodgers ahead of Ryan, when Ryan's Falcons just beat Rodgers' Packers 20-17 yesterday.

Of course, I'm presupposing there is a Falcons Nation, and that if so, anyone there would care about my ramblings.

But, back to Rodgers. The third-year Packers starter has a great arm (witness his game-tying bullet to Jory Nelson) and is as tough as they come at this position.

With no running game and lots of injuries to his supporting cast (which is not that great to begin with), Rodgers is putting up terrific numbers passing and even running the ball himself when all breaks down.

He may be as talented as anyone at the position today, with the exception of the No. 3 candidate... 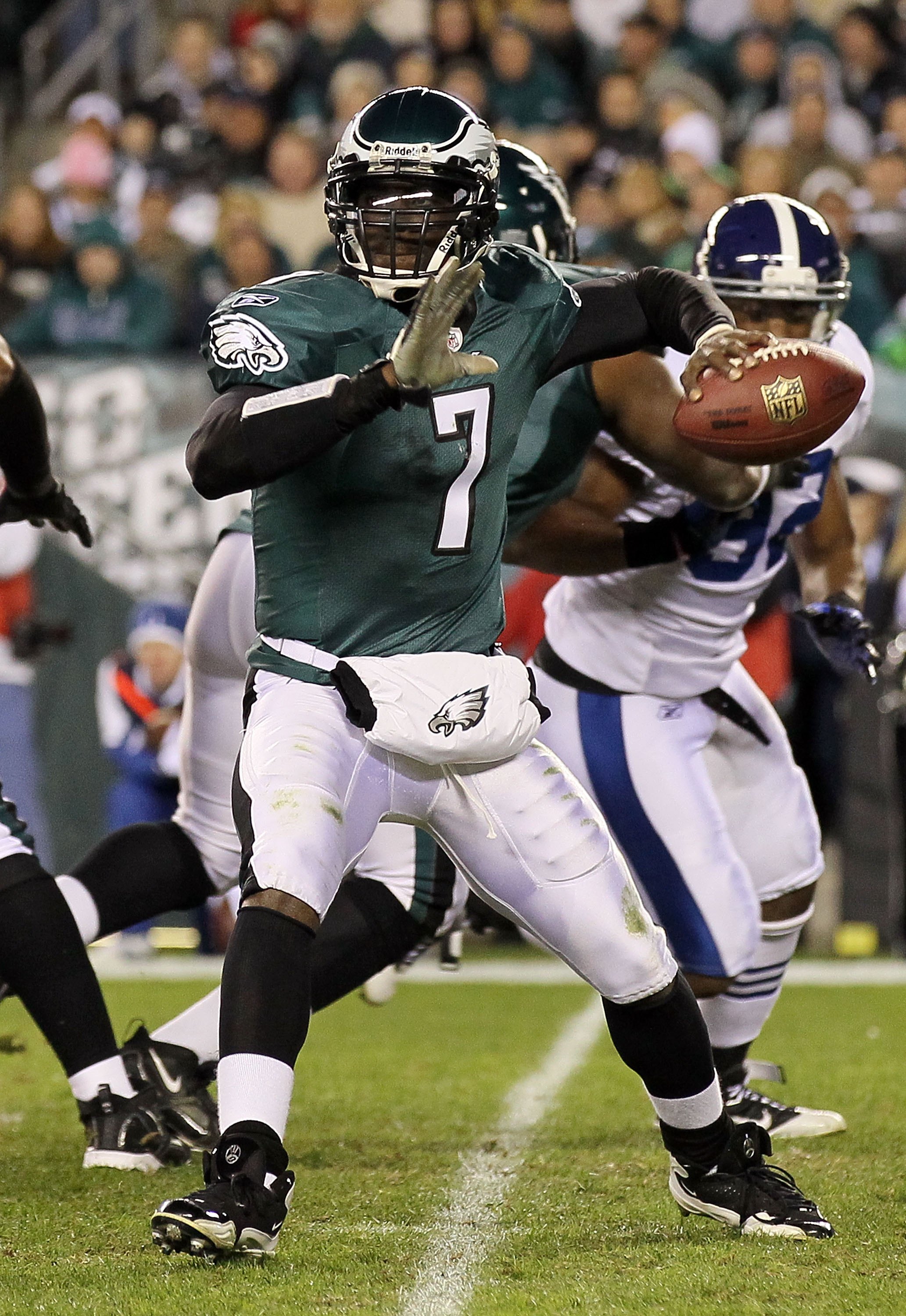 It took 11 games for the Philadelphia Eagles to lose a game that Vick started and completed. Okay, there were only five others, but you get the point.

There's nothing more I can tell you about Vick and his remarkable comeback season. He's throwing the ball exceptionally well, and he has lots of weapons to chose from.  When things break down, or sometimes by design, he is still one of the scariest—if not the scariest—open-field runners in the league. From any position.

Vick leads all quarterbacks in rushing yards and is still out in front (if barely now) in passer rating.

One thing he'll need to protect against is the amount of fumbles he's prone to. He has fumbled eight times in the equivalent of half a season, although his team has only lost one. Having said that, one admires his warrior spirit on the field. 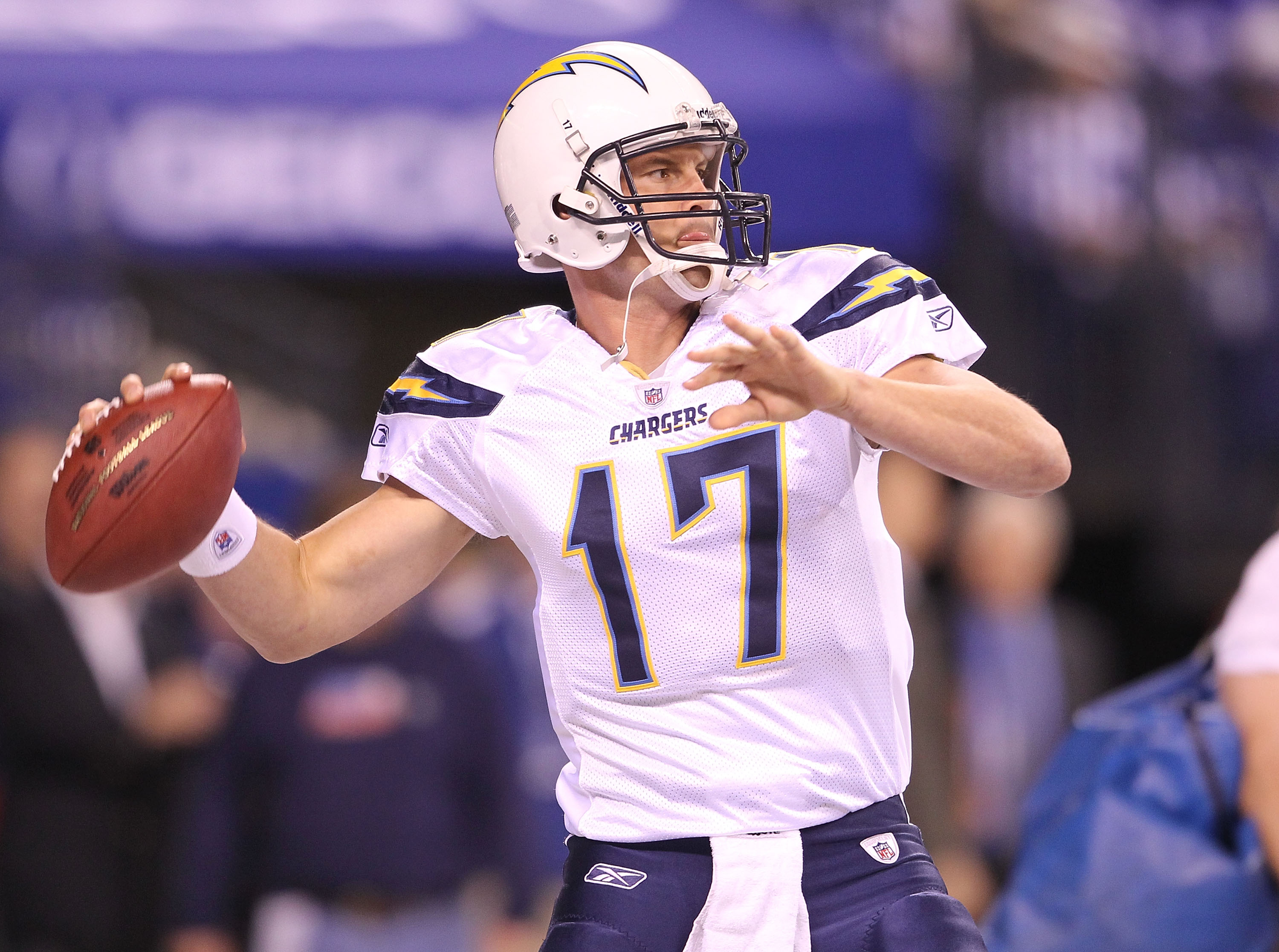 Rivers' San Diego Chargers team is only 6-5, but they are coming on strong. After a hideous start, and lots of injuries to key supporting players (such as Vincent Jackson and Antonio Gates), the Chargers are in a great position to win the AFC West once again.

Rivers has been the glue for a team that could have easily fallen apart without his leadership.

The sixth-year quarterback, who really came into his own in 2008-09, is having his best year, especially when you consider that he has done so while missing Gates for a few games and getting no playing time from Jackson, a co-favortie target.

The Chargers' passing attack is second in the NFL in yards per game, while Rivers has the third-highest passer rating, just behind Tom Brady and Michael Vick. Rivers continues to throw for a high completion percentage (66.2 percent) and lots of touchdowns (23, tied for first) while limiting his interceptions (nine).

This has placed him second on my list, just behind... 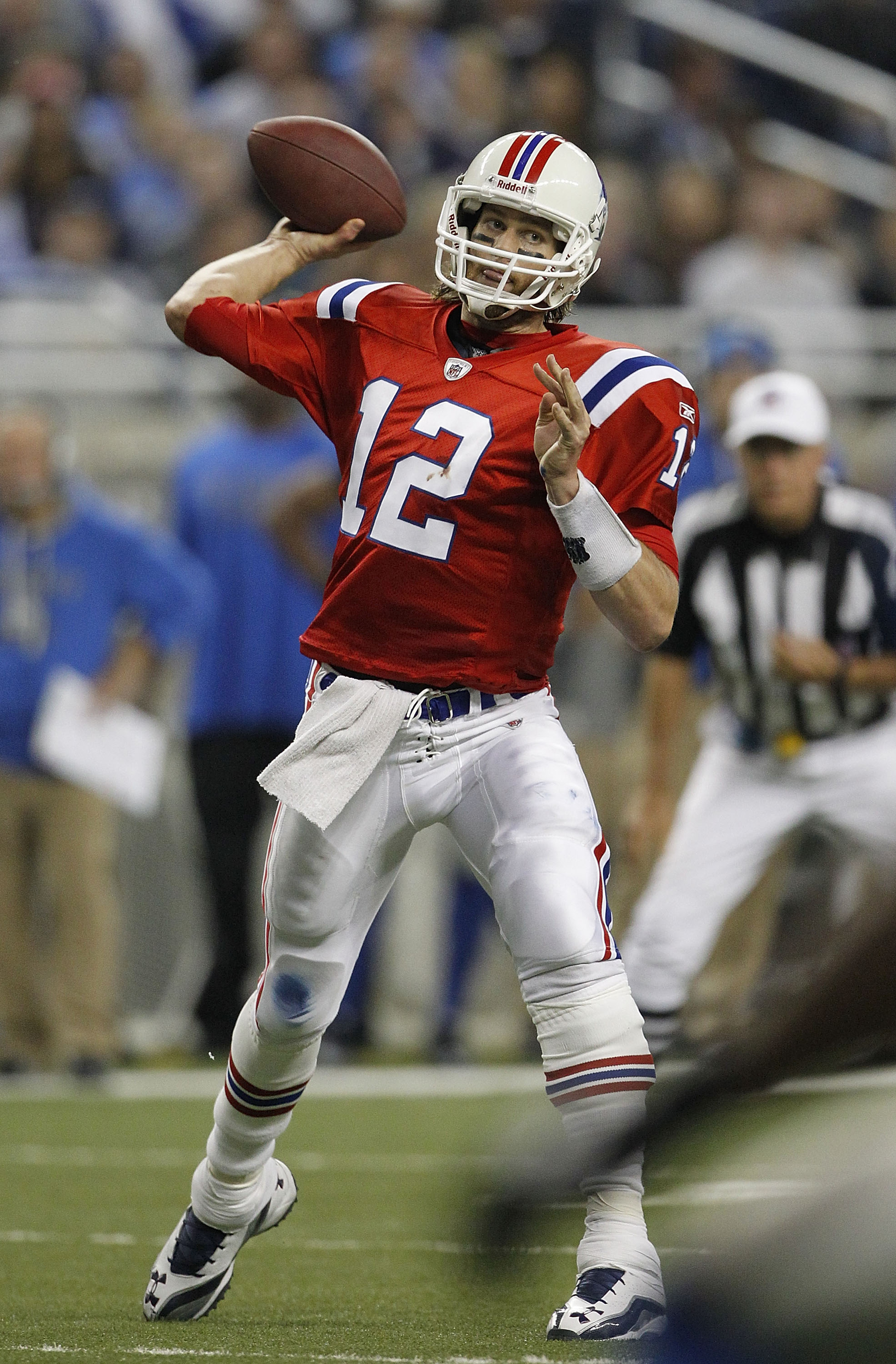 Tom Brady is back, possibly as brilliant as ever, in leading his Patriots to a 9-2 record, tied with the Jets for supremacy in the AL East, the AFC and the NFL as a whole.

Brady is tied for the NFL lead with 23 touchdowns and has done so with only four picks. Put it this way: Whether you give him Randy Moss, Deion Branch or Rob Gronkowski, the guy just wins, baby.

With his 9-2 record, Brady already ranks ninth all-time with 106 wins. His next win ties him with Terry Bradshaw, who had a 107-51 record, and a quite impressive .677 win-loss percentage leading those great Steel Curtain teams.

Brady, you ask? How about 106-32, for a .768 percentage. One can make a case that he's the greatest winning quarterback of the modern era, and he's doing his thing again this year.

His performance has him atop my current NFL MVP rankings, with Rivers, Vick and Rodgers not too far behind.

Stay tuned for next week's update, as things change fast in today's NFL.