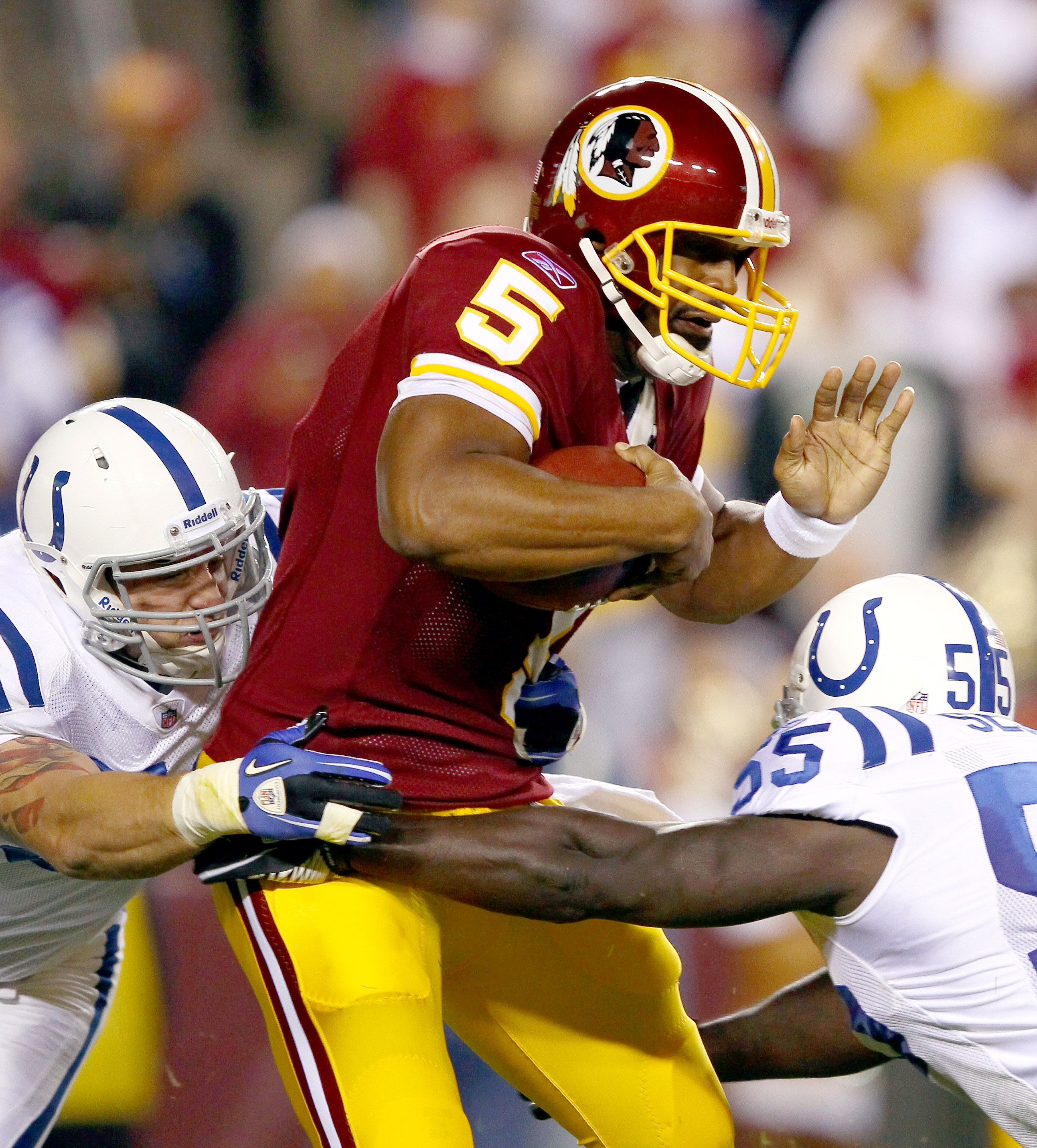 The Washington Redskins suffered a heartbreaking loss to the Indianapolis Colts on Sunday afternoon, a loss that pretty much reflects the way most of their season has panned out.

If the game were to have gone the other way, it would be a defining game of the season for Donovan McNabb and the Redskins, but the loss definitely raises more questions than answers about the team, and leaves speculation into whether they are contenders or pretenders alive.

There have been six games this season that have gone into overtime, the Redskins have played in two of them.

Five of their six games have been decided by less than a touchdown, so their season could very easily look very good or very bad at this point, but right now, they sit at a respectable 3-3.

So, let's take a closer look at how the Redskins have done in the first six weeks of the season. 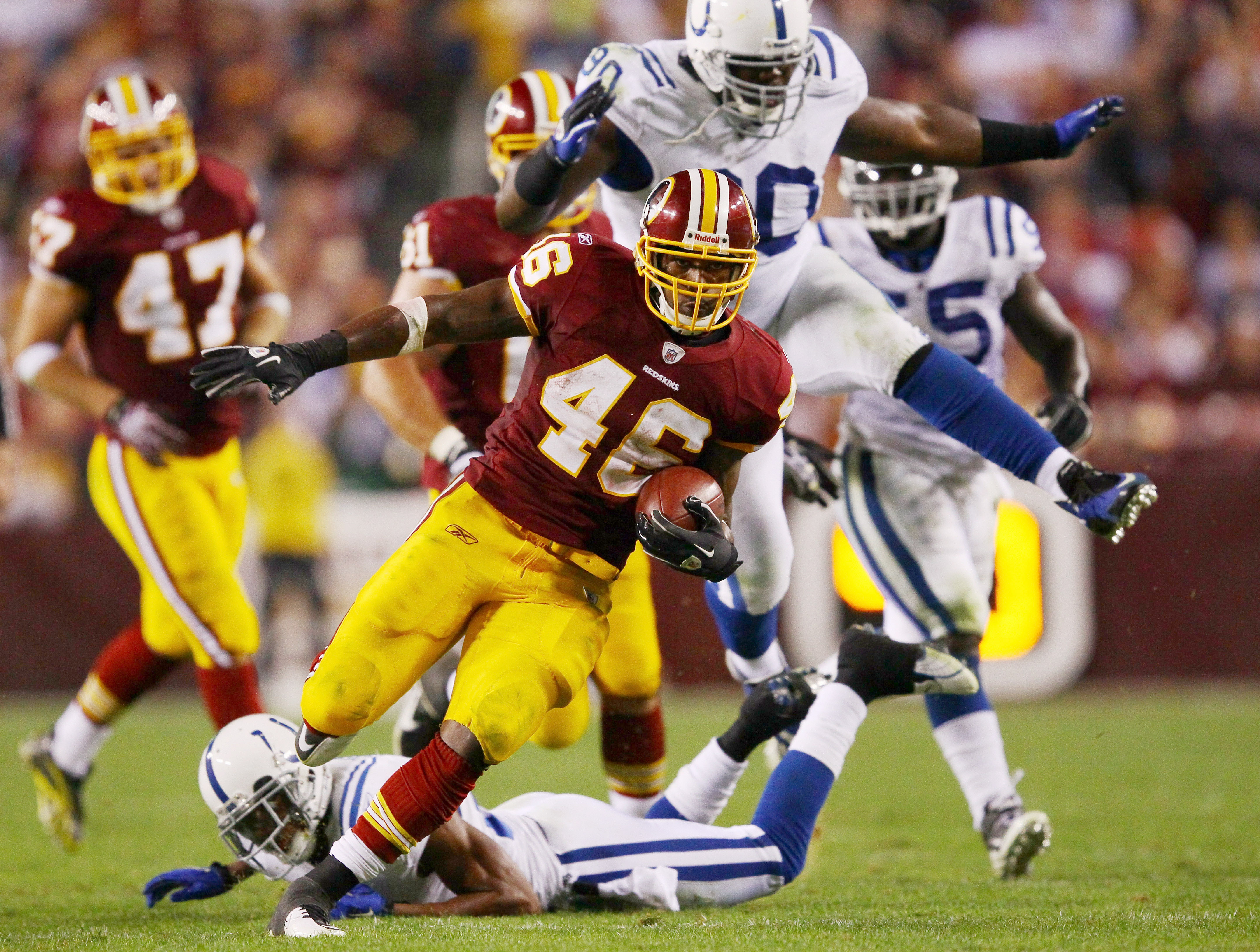 The Redskins offense so far this year has been good enough to win games, but not much more can be said of it.

Donovan McNabb has been a very pedestrian quarterback thus far, and has only posted a quarterback rating of over 100 once this year, in an overtime loss to Houston where his rating was 119. None of his other games has seen his rating creep above 80.

For a quarterback that has a career 86.2 career rating, and whose lowest has been 85 since 2004, this should be a concern. He is also posting his lowest completion rating at 58.1 percent since 2006.

Elsewhere, the Redskins are in the bottom third of the league in rushing attempts, and are averaging only 92.1 rushing yards per game. The longest run for them so far this season is 36 yards.

Needless to say, they lack an explosive rushing game.

The receiving core has been more or less solid throughout the year, with Santana Moss looking like he can break the 1,000 yard threshold for the fourth time in his career, Chris Cooley being his normal self as a solid tight end, and rookie Anthony Armstrong out of West Texas A&M emerging as a legitimate big play threat.

Overall, the 'Skins run a solid offense and don't make too many mistakes, but they also don't really stand out from the rest of the teams in the NFL. 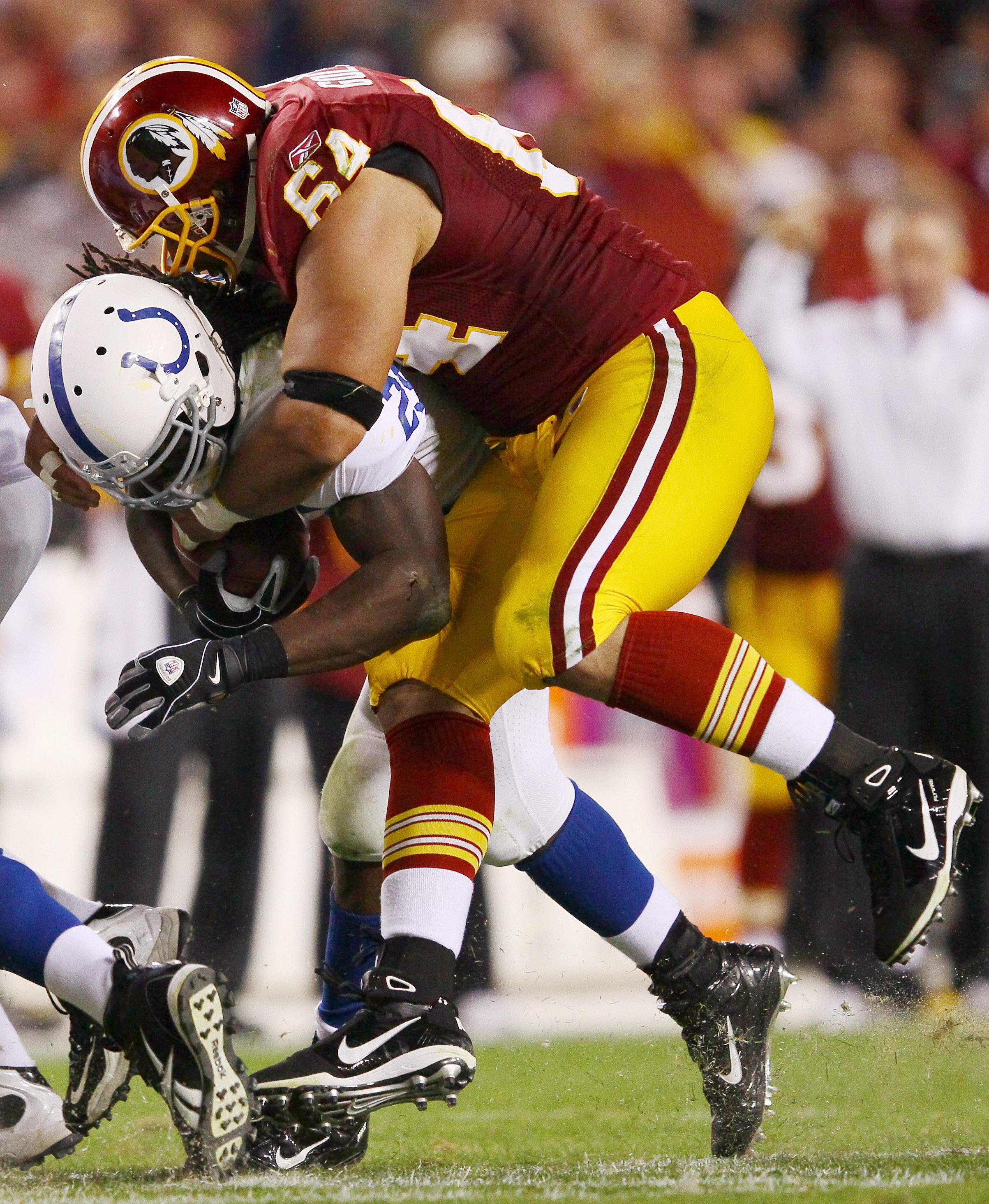 The Redskins defense is what has kept them in games.

They may look like they are doing quite bad as a unit defensively, but when it comes to the defensive side of the ball, they'll bend but won't break.

The Skins rank 31st in the league in pass defense, giving up 298.2 yards per game, and 24th in rushing D, at 121.8 yards per game, but they have only given up 12 offensive touchdowns this season. Against Dallas, Green Bay and Philadelphia, they yielded only one touchdown in each game.

This defense has been a one man wrecking crew, they are the guys who knocked Stephen Jackson out of the game, sent LeSean McCoy to the sidelines with broken ribs, took Michael Vick out of their game against him, and the next two after that, concussed Aaron Rodgers and knocked Joseph Addai out of Sunday's game.

They are second in the league with 13 forced fumbles, and third with seven recoveries.

Aside from the hard-hitting nature of their defense, they also lead the league in pass deflections with 39, something that will lead to more interceptions down the road if it is kept up. 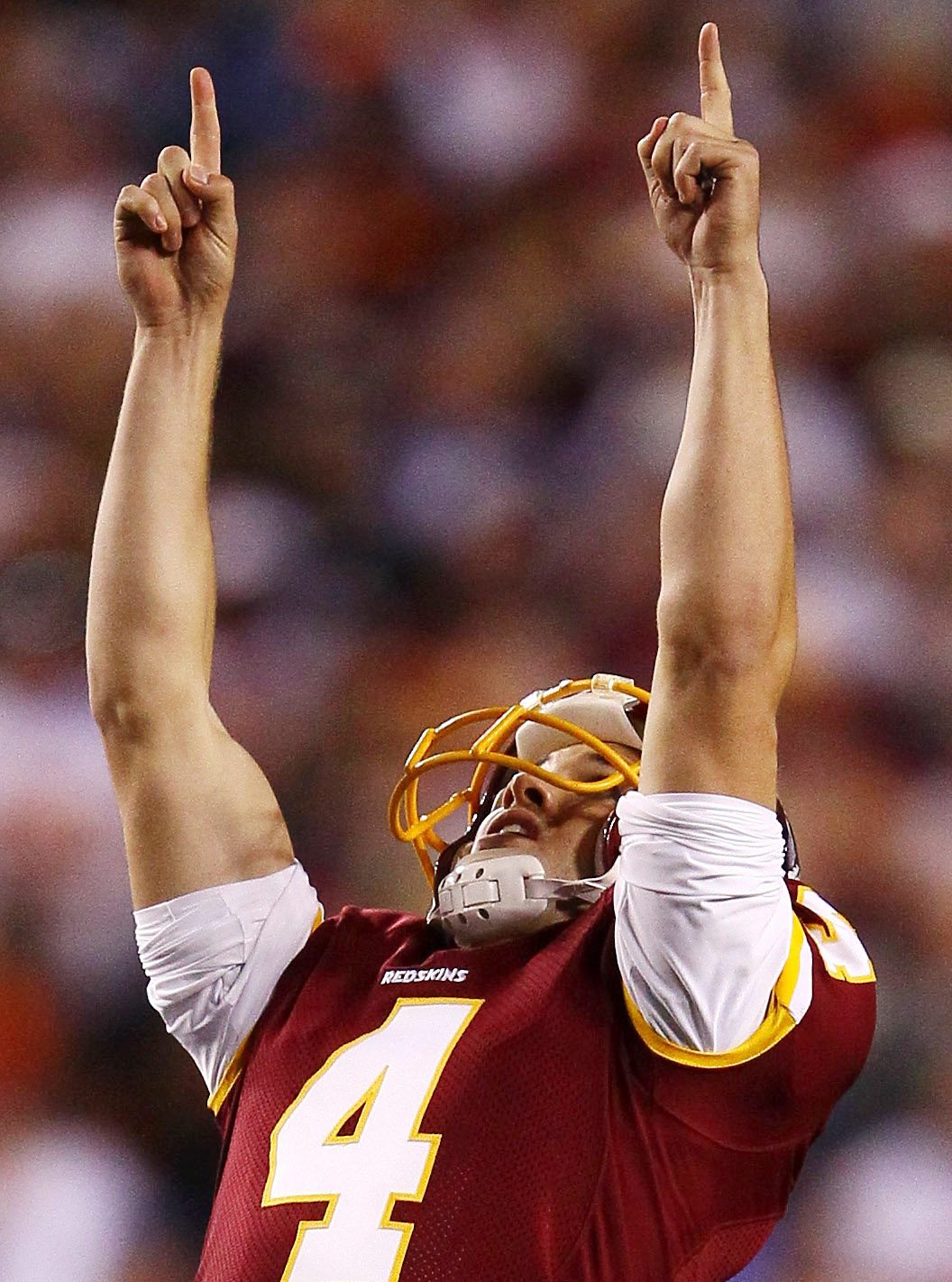 With a team that plays so many close games, kicking is key.

That is why Graham Gano has been so important to the Redskins. Gano has missed only two field goals this season that have been less than 50 yards. What he lacks in length on his field goals, he makes up for in accuracy, he is 12 for 14 under 50 yards, 12 for 16 total this season.

Their punters (they have used three so far this season) may also be lacking in the leg department, but they have put 11 of their 33 punts inside the 20-yard line.

Rookie return man Brandon Banks has been outstanding on punts, averaging 19.4 yards on eight punt returns this season, with a 53 yarder on his resume that nearly went for a touchdown. 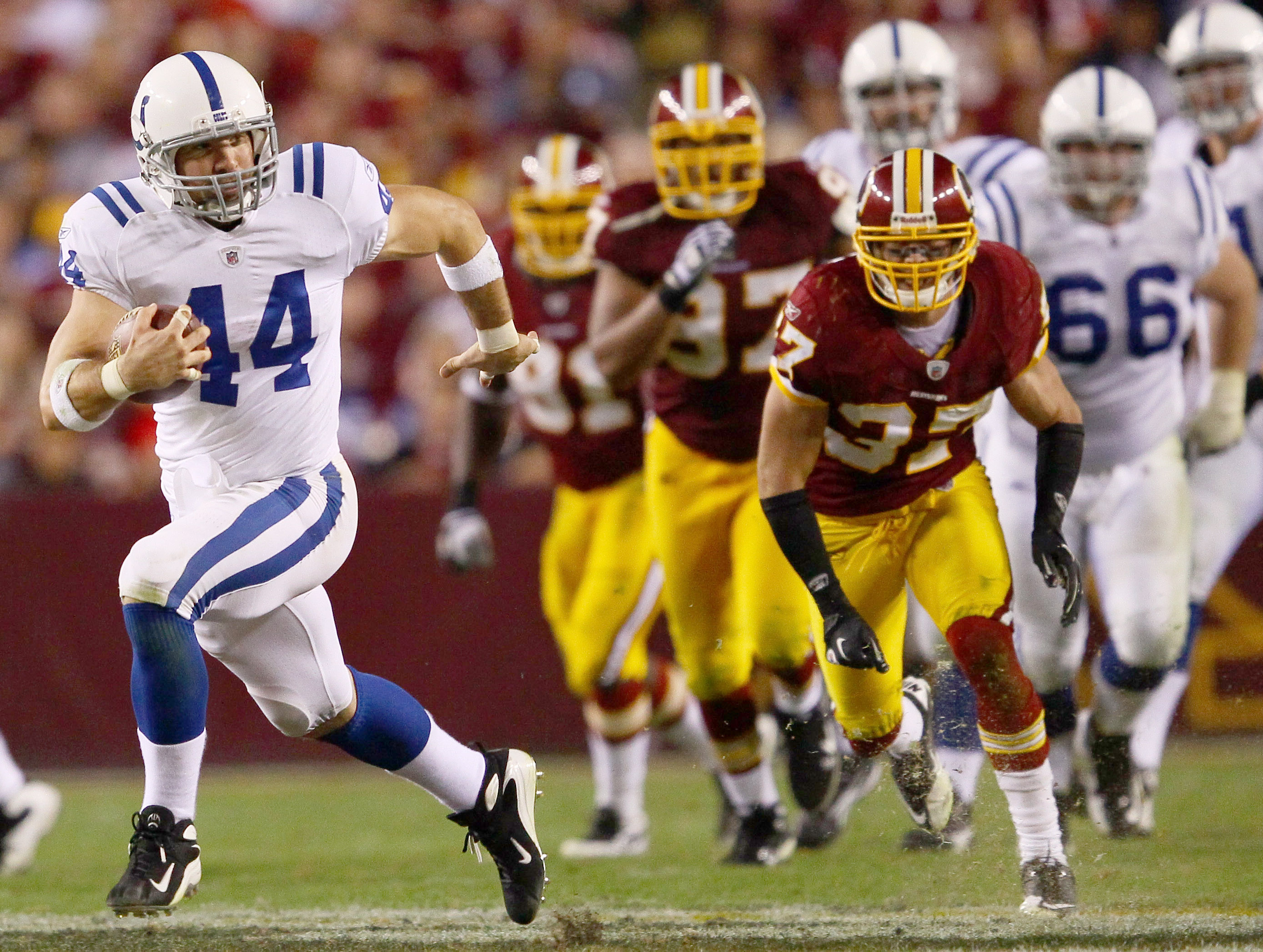 The Redskins have played a slew of good teams so far this season.

Every team they have faced off against this season, with the exception of the Rams, has a quarterback that has made a Pro Bowl.

They held one of the most dynamic running backs of the season, Arian Foster, to 69 yards and stayed right in the game with perennial MVP candidate Peyton Manning.

The Redskins have been able to play up to the competition they are facing, which is why they stand at 3-3 and not worse, because it could be much, much worse. 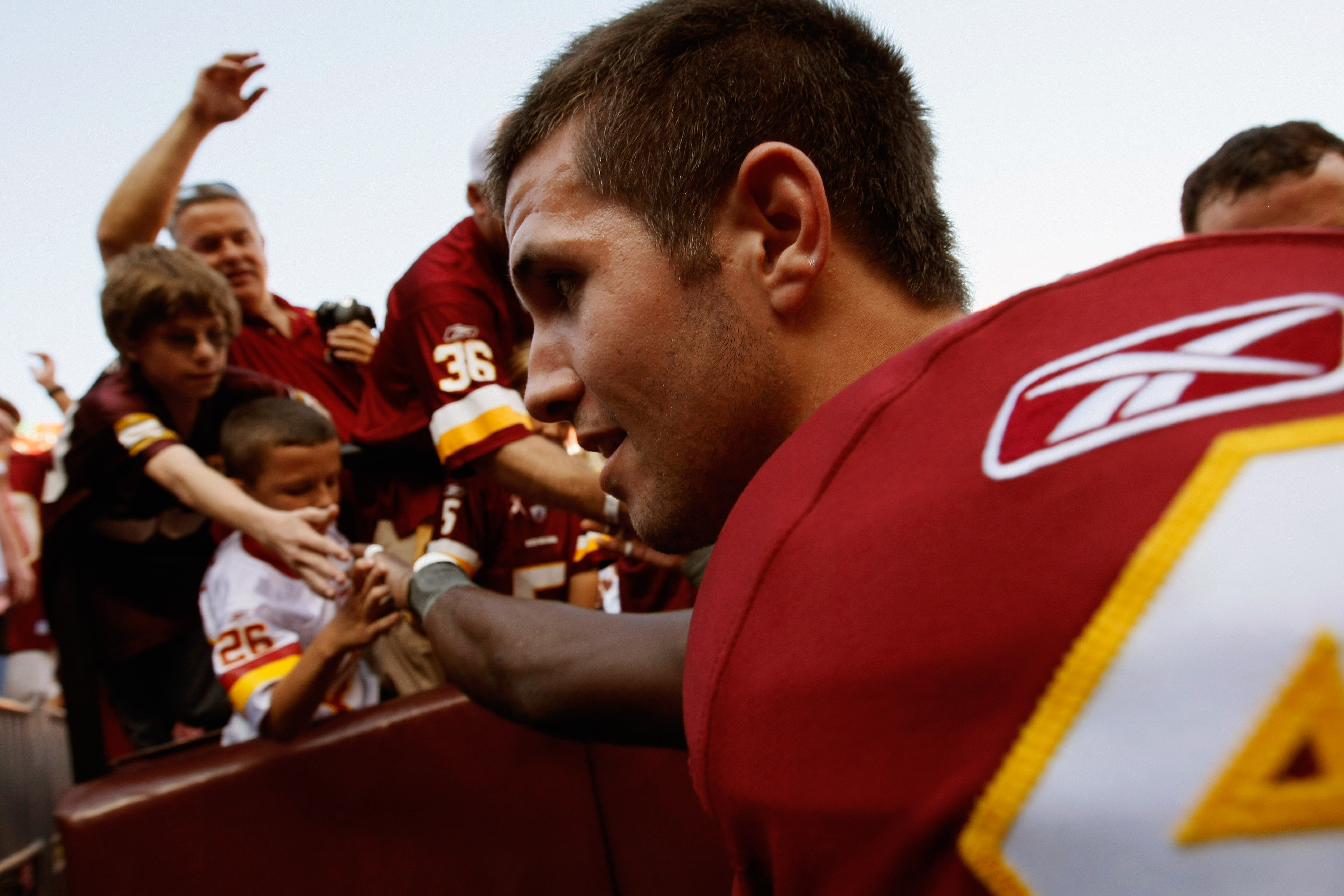 The Redskins have put themselves in place to make a move this season with their good start.

They have only played two games within their division, and are 2-0 in such games, which is a good indication for what is to come.

Depending on how they handle the rest of the season, which is almost as difficult as the beginning of their season has been, they have the possibility of making a run at the playoffs.

The rest of the season sees them playing the Giants twice, one more against Philadelphia and Dallas, along with games against Chicago, Tennessee, Tampa Bay and Jacksonville, all of which could prove to be difficult games.

Overall, I give the Redskins a solid B for the strong 3-3 start that they have had so far this season.