10 Reasons Why We Love College Football 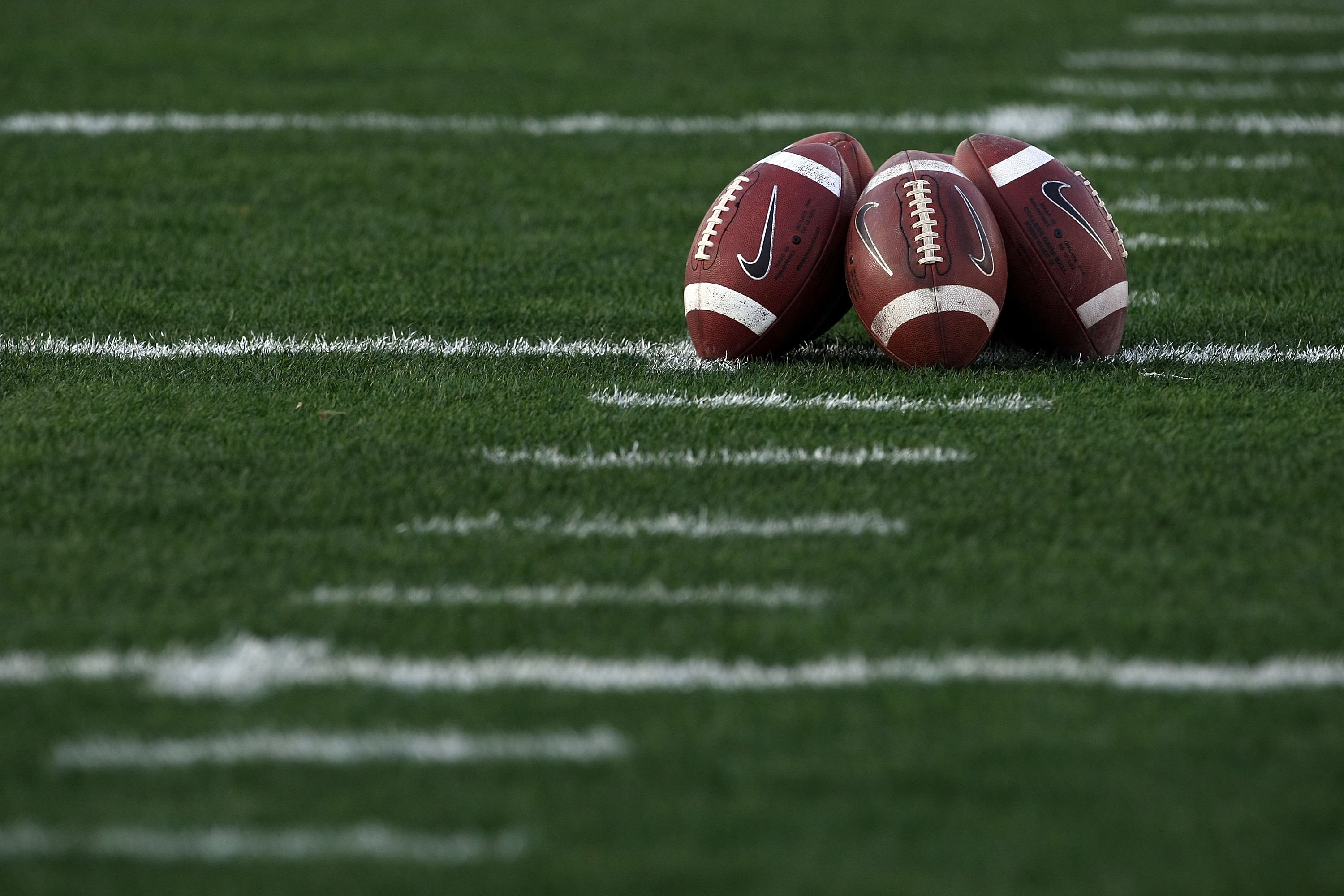 After many long months, some hot and some cold, some long and one short, the wait is finally over.

On Thursday, September 2nd, the 2010 college football season officially begins, and brings joy to millions of people all over the country and around the world.

Since January, all we've had to satisfy our cravings for football have been the NFL—which everyone knows just isn't the same as college football—and reruns of games we recorded on DVR throughout the season or saw on random channels during the long, dog days of summer.

We've discussed everything about every single piece of news about our favorite school until we got bored of it. We've argued about every single poll until we were blue in the face, and then argued some more. We've talked smack and have hoped upon hope that we won't have to eat crow when the game actually comes around. 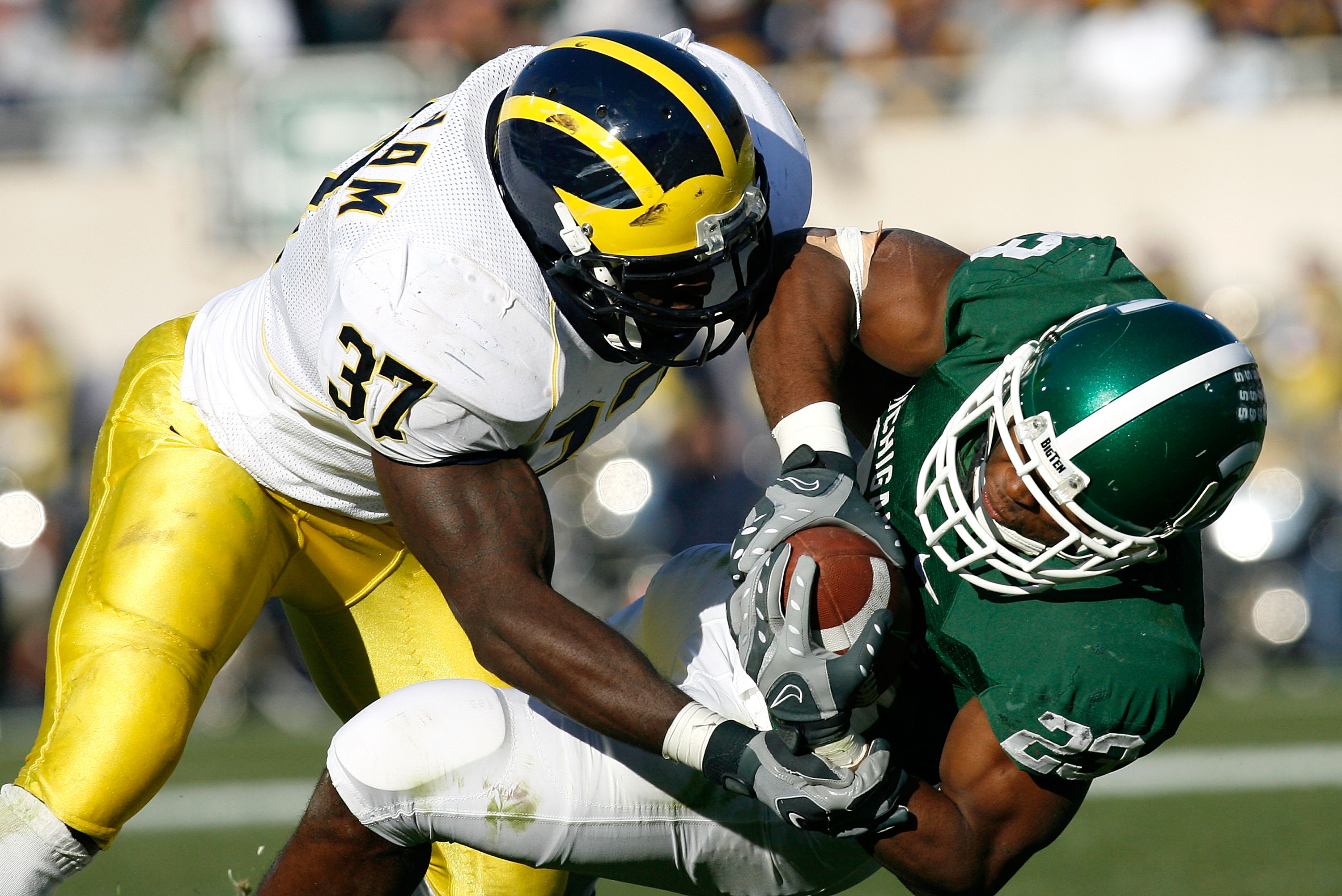 Hard hits like these are just one reason why college football is so appealing to us.Kevin C. Cox/Getty Images

Football is a purely American sport that epitomizes all the values that we hold dear in our country: hard work, teamwork, toughness, victory, and glory.

Football is a fast-paced game of action that could change on any single play. The anticipation of a game-changing play always keeps fans on the edge of their seats, waiting for the moment to explode in jubilation.

Sure baseball was once, but that is now America's pastime. Football is now. Nowhere else in the world is football regarded as a sport worth following or getting excited about. But here in America, it's everything.

What is there not to love about football? The action is fantastic, the joys of victory incredible, and the relationships you build with fellow fans and opponents are unlike any other relationship you could ever form.

Football is the greatest game invented and that alone is reason to get excited.

Tailgating is just what you do on Saturdays before a game.

It's an unspoken expectation of attending a college football game. Who doesn't enjoy sitting around before the game eating great grub and watching the early games on TV with about 50 of your closest friends (or tailgating neighbors)?

Every campus tends to take on the personality of the region. Barbecue is huge in the South and something not quite as good is huge in the North (just kidding northerners). Whatever school you find yourself at, whether it be Florida or Baylor, you're always going to find some hardcore tailgaters with their mega grills churning out dozens of hamburgers, brats, and ribs.

Some of the best tailgates in the country are found on SEC and Big 10 campuses such as LSU, Wisconsin, Ole Miss, Penn State, and Georgia. Obviously there are many others, but these are just a few. 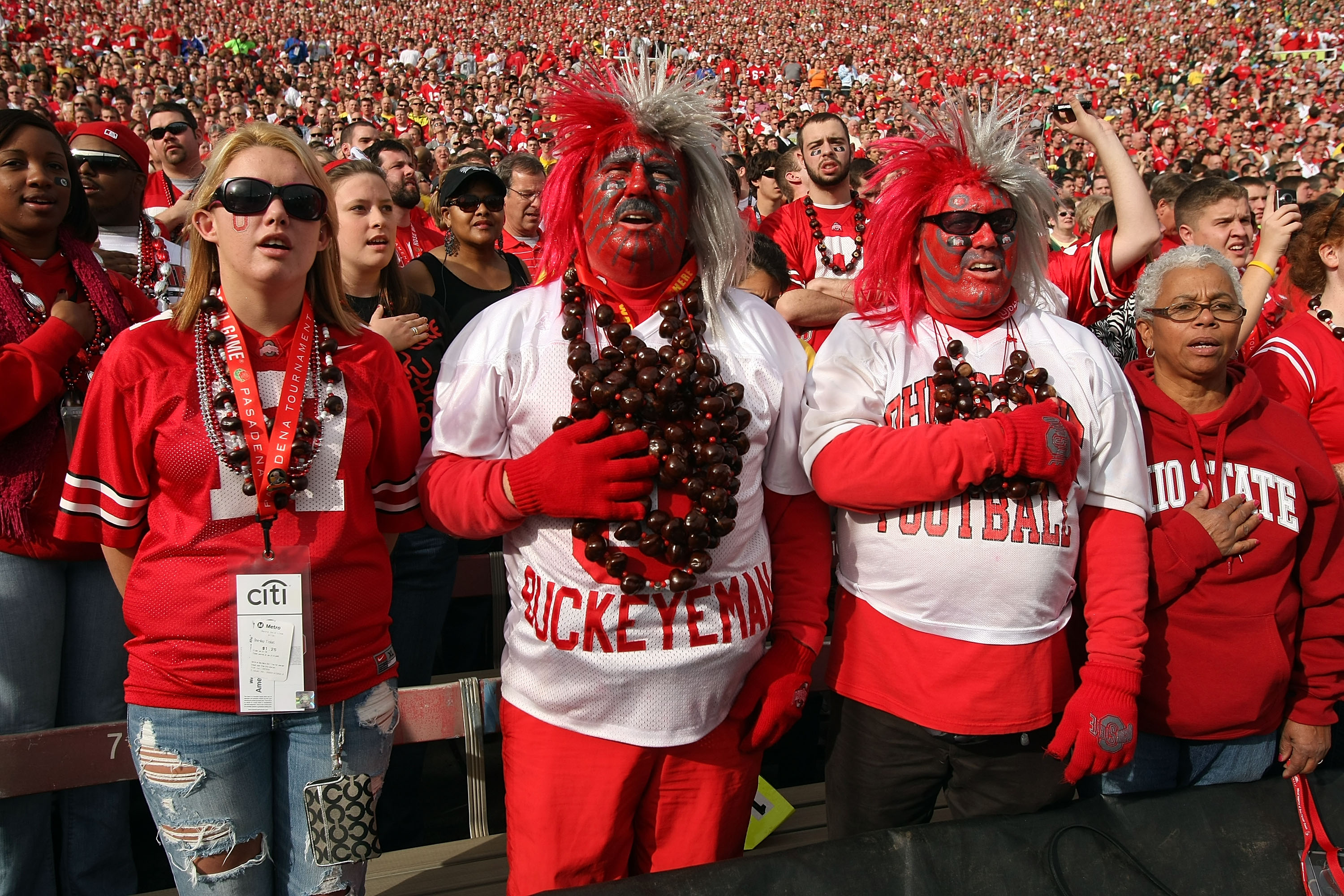 Ohio State fans go all out with their garb on game day.Stephen Dunn/Getty Images

Ah yes. The things that make college football so much better than the NFL: is school pride and passion.

It's also a part of who you are. You go to Washington, you're a part of the Husky family. You go to Virginia and you're forever a Cavalier.

I will at this point digress and point to Sports Illustrated's college football columnist Stewart Mandel and say that use of the term "we" when referring to your team is not allowed unless you actually play.

School pride is the source of one's passion for a team. You become so entangled with the school that any form of success at the school, whether it be football, baseball, or academics causes you to thump your chest, smile, and say, "Yeah, that's my school."

Routine is a part of every team's pedigree. Every week, they go through the same drills at the same time, in the same manner, and with the same people as they prepare for the game. The schedules never differ in pregame and you can always count on a run-through, stretches, and the band's performance at the exact same moment before kickoff.

When the band takes the field right before the team takes the field accompanied by fireworks, an exciting pump up video, and the roar of the crowd, the excitement reaches a boiling point. At Oklahoma, when the drumline marches out to the goal line and plays their three drum licks, you just know.

Nothing causes a fan to swell with pride faster than the first few bars of their school's fight song. A fight song identifies a school and one immediately thinks of a particular school when they hear their fight song.

Some are epic songs of grandeur, such as Michigan's "Hail to the Victors."

Others are quick, lively songs that really push the tempo, such as "Texas Fight." Some, like Tennessee's "Rocky Top" are just darn fun to listen and sing along to, although they tend to get stuck in your head for hours on end.

You also have your short, sweet, and simple fight songs like Oklahoma's "Boomer Sooner" and your long and drawn out ones like Texas A&M's "Aggie War Hymn." 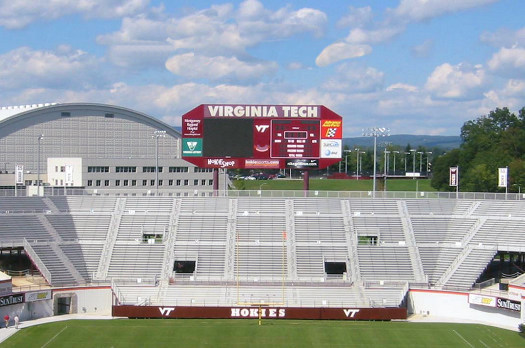 Nothing brings people closer together than being in a place that causes you to sit, well, a lot closer together than you would normally sit with a stranger. But since you're sitting beside someone who is cheering for your team as well, it becomes a very bearable thing and you may even make a new friend.

Bleachers in college football stadiums really enhance the atmosphere at games because of their multiple uses.

First, as stated above, they bring people closer together, both literally and figuratively. You're obviously going to be way more inclined to slap hands with someone who is basically sitting in your lap. I mean, you really have no reason not to.

Second, the bleachers serve as terrific standing platforms, especially in the student section, and make great noise makers when you hit them with other objects and jump up and down on loose ones.

I pity fans of schools that have chair-back seating throughout their stadium because they miss out on a great part of college football. 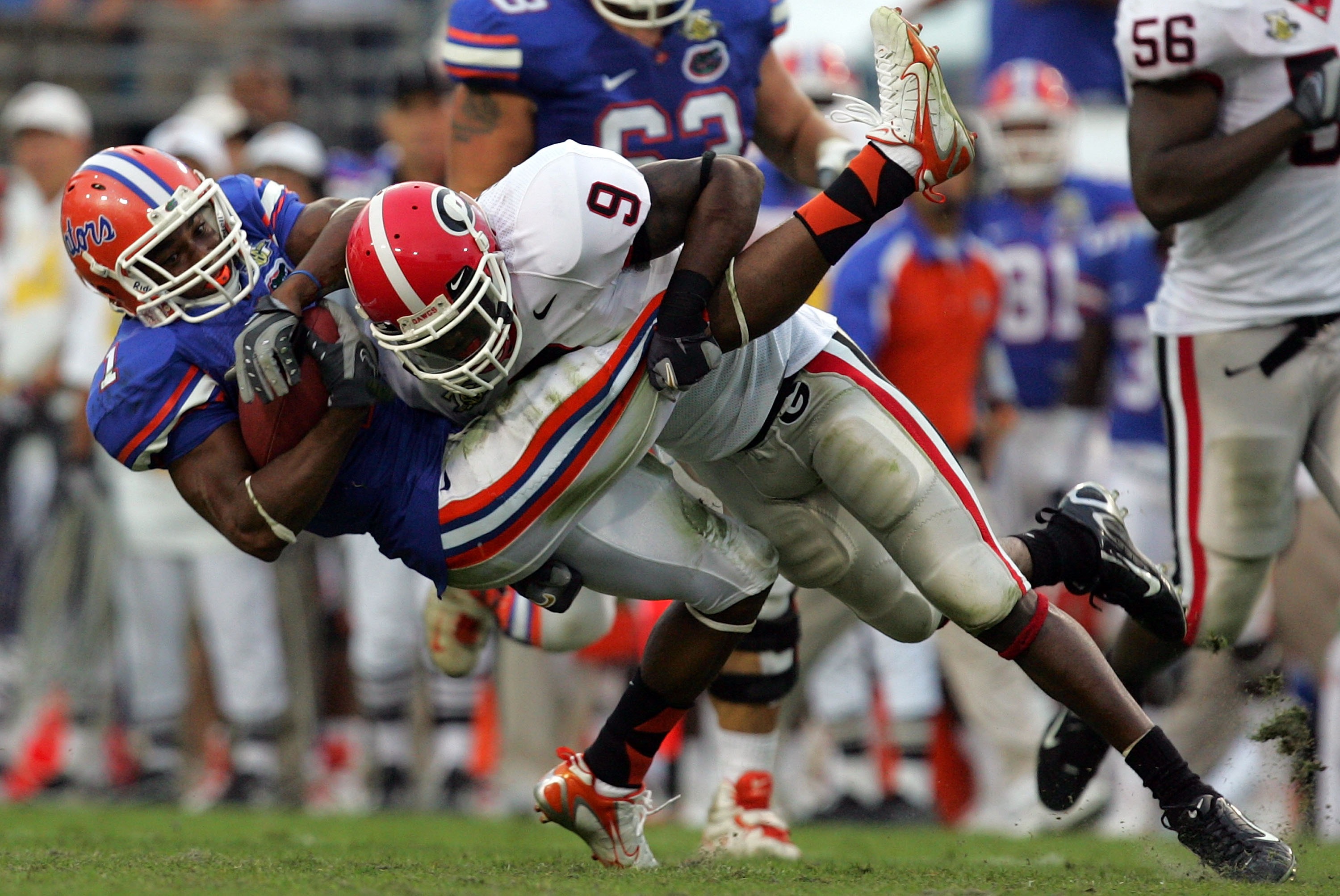 Florida and Georgia have one of the fiercest rivalries in the country each year.Ronald Martinez/Getty Images

Just the very word gets our blood pumping and gets us fired up for what is to come. We love rivalries in college football. As bad as it sounds, the main reason we love rivalries is for the hatred and pure contempt two schools and their fan bases have for one another.

We love the great ones such as Michigan vs. Ohio State, Oklahoma vs. Texas, and USC vs. Notre Dame.

We also love the names that the games get as well.

Florida and Georgia battle at The World's Largest Outdoor Cocktail Party every year.

Utah and BYU wage a Holy War that is filled with as much hatred as any rivalry in the country.

The Backyard Brawl is fought between Pittsburgh and West Virginia and The Border War between Kansas and Missouri spawns ill feelings that go all the way back to the 1850's and the free-state, slave-state debate.

Above all else though, we love the intensity of a rivalry game.

If winless South Carolina traveled to an undefeated Clemson in the last game of the year, we would know not to count out the Gamecocks simply because it's a rivalry game. Anything can happen in a rivalry game. 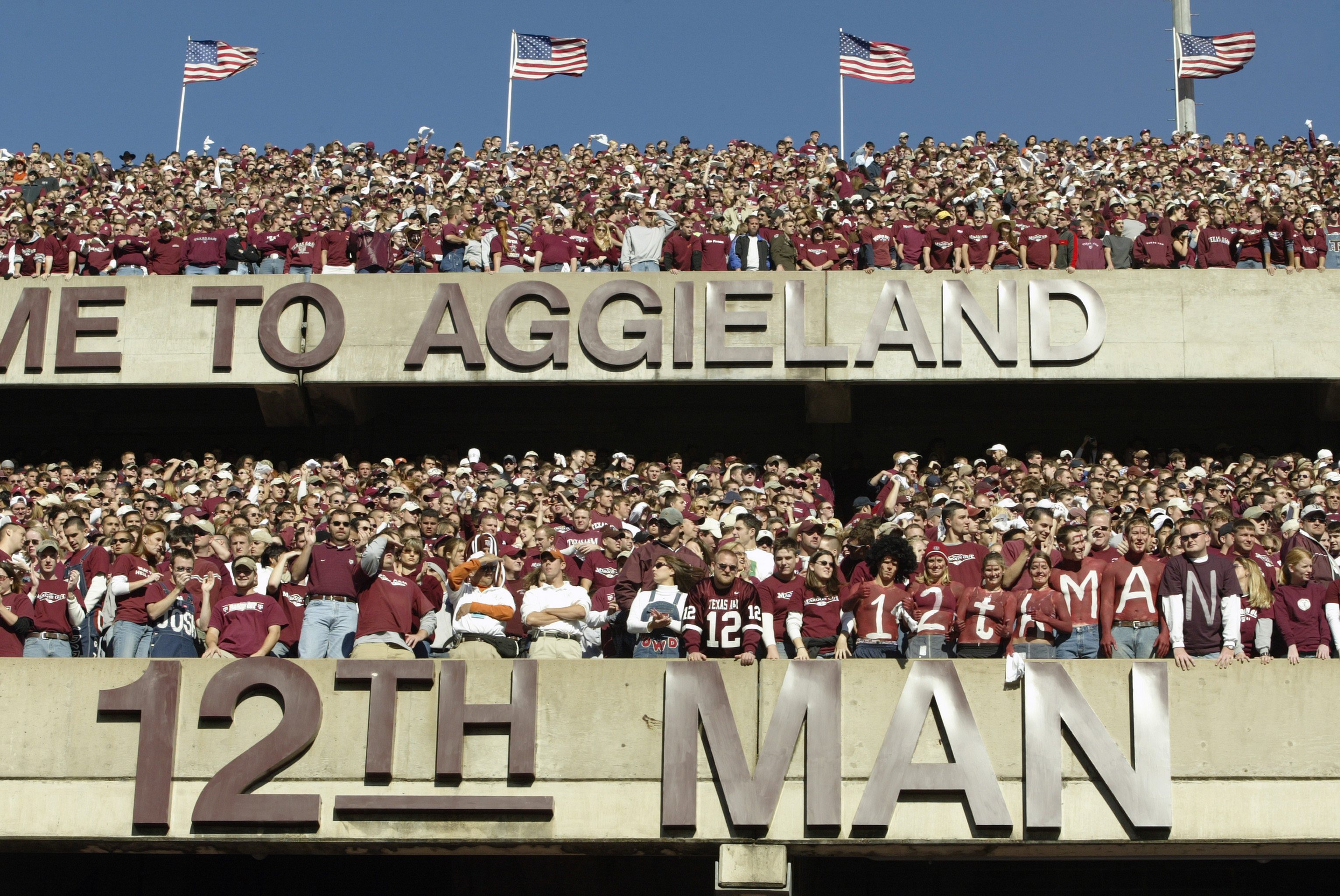 Traditions abound at every school in college football, whether it be how the team enters the field, the songs the band plays before the game, or the cheers fans go through every game.

Each of these traditions are what set each school apart from the next. How boring would attending games be if each school did the exact same thing as the opponent?

Many traditions at schools have gained national acclaim over the years, such as the Tunnel Walk at Nebraska, rubbing Howard's Rock at Clemson, and of course, the famous dotting of the "I" at Ohio State.

Some schools, such as Texas A&M are defined by their adherence to tradition.

The Aggies are known for just about everything, from the 12th Man, to the yell leaders, and to the fact that you can't walk on the grass around campus.

Without traditions at each individual school, college football would not be quite what it is today. 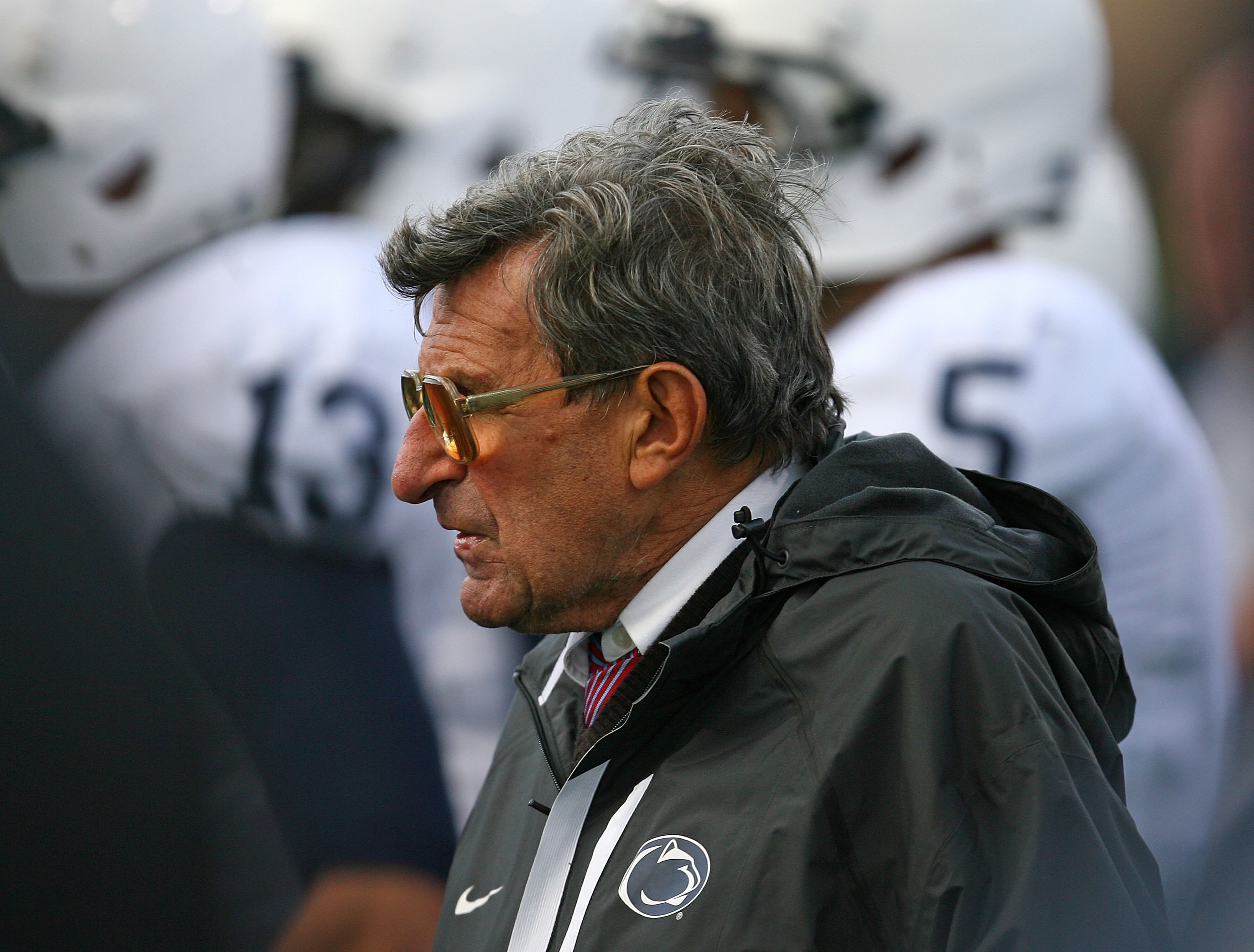 Some people may disagree, but one of the most exciting parts of college football is the annual player turnover.

It's exciting and scary at the same time when your team loses a star and you have to replace them. You never know if the player waiting to come in could be the greatest ever or a complete flop.

The personality of the players also makes the college football game great. Some are vocal, others reserved, but no matter what they are off the field, they do their utmost to define themselves in a positive light on the field.

Tim Tebow is probably the most liked and hated player that has played at the college level in some time. You either loved or hated the guy. The difference between people's opinions of him was an incredible thing to behold.

The coaches are another thing that sets college football apart.

You don't see coaches staying with a team for 45 years in the pros like Joe Paterno has done at Penn State. That's a very rare thing in any sport and it's something that should be admired. Some coaches are just lovable, and others, like USC's Lane Kiffin, just make you cringe.

Their personalities also really shine through on the field, such as Woody Hayes and his horrible temper that eventually cost him his job. Then there are the silent leaders, such as Kansas State's Bill Snyder, who hardly seems to say a word during a game, but is unquestionably one of the best coaches of his generation.

Football is a game played and coached by individuals and it's only fitting that their personalities and demeanors are a reason why we tune in to watch them play every week. 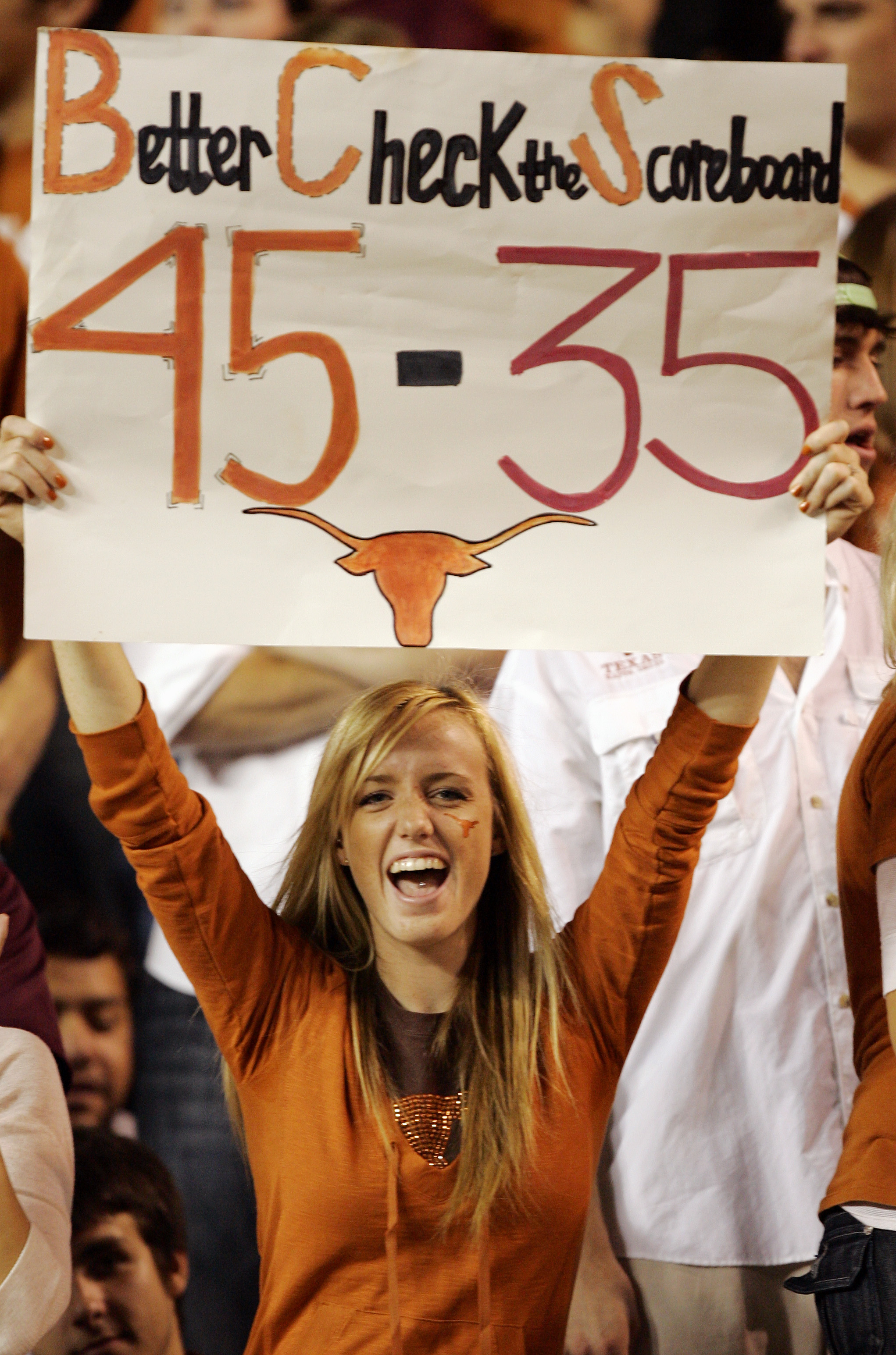 Nothing Texas did could remind the BCS enough about their 45-35 victory over Oklahoma in 2008. The Sooners jumped Texas to go to the national championship game.Brian Bahr/Getty Images

Everyone loves a good controversy. Don't even try to deny it.

As much as people hate the BCS, you know that you would miss the extremely heavy debates about what team is more deserving to play in the national championship if it was dissolved. Controversies drive arguments and debates and give us something to talk about.

The BCS as a whole is a huge controversy, but it has also caused many other debates within the system.

The biggest controversy of the BCS era occurred the next year when USC, Oklahoma, and Auburn all finished the year undefeated.

Auburn was left out to dry and USC proceeded to take Oklahoma behind the woodshed in the national championship game. Auburn fans are still bitter about that one.

In 2008, the infamous Big 12 South tiebreaker took place between Oklahoma, Texas, and Texas Tech. By virtue of the BCS standings, Oklahoma advanced to the Big 12 Championship and then lost a hard fought battle to Florida in the national championship game.

Nothing is perfect, and therefore, controversy is always going to be a part of college football, whether it be the poll placement of a team, or the right to play for a national championship.

On the bright side, we'll ALWAYS have things to talk about.