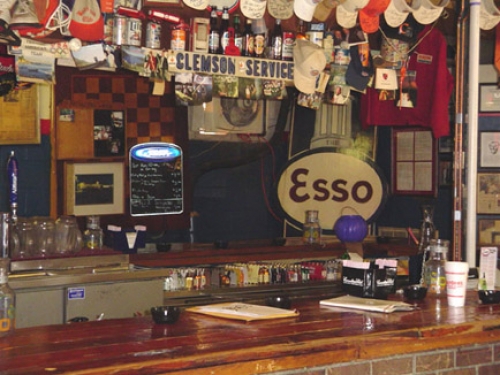 There are a number of places in the U.S. where tailgating is almost as important as the game.

For the Food Network-challenged, tailgating is the art of eating prior to kickoff. There is only one rule that must be obeyed in this time-honored practice: The eating must be done in an area adjacent to the football stadium.

If this activity is performed away from the stadium, for instance at a private home, then it becomes a party. In some areas, this will qualify as a "tailgate party."

Proximity is defined, in this case, by where one parks in order to walk to the contest itself. Tailgating thus involves a parking lot or nearby field.

So now we have our definitions: Tailgate parties are usually at a house, while tailgating is done closer to the stadium.

School parking lots are alive with the smell of various hometown culinary favorites. LSU, for instance, features a menu of delicacies prepared on location before game time that rivals any down the river in New Orleans.

Still others, like Ole Miss and Tennessee, feature spectacular locales and gathering areas.

But this is a treatise of a specific nature regarding tailgating, not one to review the food prepared in the parking lots or available inside the stadiums.

Specifically, we are concerned only with where the best places are to obtain delicious food and take it to the stadium—the experience of consuming delights within the atmosphere of the game without actually preparing the meal.

There have been many well-written words concerning the homemade specialty dishes at tailgating locations throughout the country, but for this article, let's give the cooks a night out.

We present the 10 best places to get prepared food for tailgating at the ballgame.

When you start with Buffalo, there is only one way to go, and everyone realizes it: Buffalo wings, the original hot chicken wing.

Before you head out to see some Mid-American Conference action, swing by Frank and Teressa's Anchor Bar on Main Street in Buffalo. This is the original buffalo wing.

No doubt the food went down better when Turner Gill was taking the Bulls to a bowl two years ago. 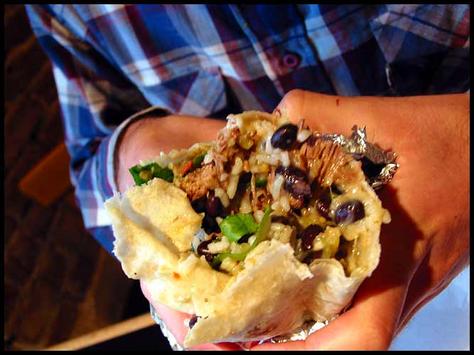 Illegal Pete's in Boulder, Colorado serves Tex-Mex and Mex-Mex creations to take care of any appetite.

This "pocket" food is easily manageable, can easily be warmed if necessary, and is inexpensive.

From the Green Chile Burrito to Taquitos and Carnitas, everything is available with a dose of hot salsa, and what is not to like about giant nachos with queso?

It can even make going to see Dan Hawkins and his Buffaloes worthwhile.

This is a facility known by reputation for Kobe sliders from Gordon Biersch Brewery and Restaurant in Tempe, Arizona.

Across the street from Arizona State University and a couple of blocks from Sun Devil Stadium, one will find tender Kobe beef with cheese in a bun.

The garlic fries are said to be the perfect complement.

It's open late, maybe just so Dennis Erickson can come by after another tough loss. 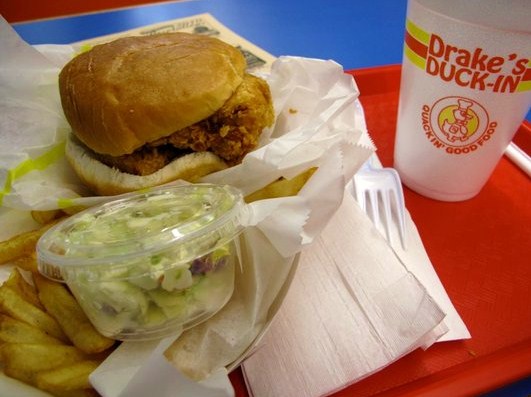 This is the chicken sandwich everyone should have at least once.

Located on Main Street in Columbia, two blocks from the University, one can almost look out the front window and see governor Mark Sanford weeping for his Argentine "soul mate."

Pretend there was only one Chick-fil-A restaurant in the world, and the founder's family still ran the entire operation. It is the only comparison that can be made concerning the chicken sandwich at Drake's Duck-In.

In addition to the fried chicken sandwich, you may wish to sample the famous chicken-fried steak sandwich.

After chowing this down in the enormous State Fair Parking Facility adjacent to Williams-Brice Stadium, fans are ready for action, and Steve Spurrier's Gamecocks usually provide it for them.

Madison is also the home of State Street Brats, another one of our locations known by reputation.

This is dairy land and lake country, where there is an influence of all things German.

Sitting in the tavern, one can look across the way at Wisconsin University and be only a brief "stretch of the leg" from the stadium itself.

The Brats are easy to transport and make for the easiest food to handle while tailgating.

In addition to the Brats, State Street provides a full menu of all things tasty, including the delicacy of fried cheese curds with Thousand Island dip.

It can be a heart-stopping adventure.

And we are not talking about tackling big John Clay. 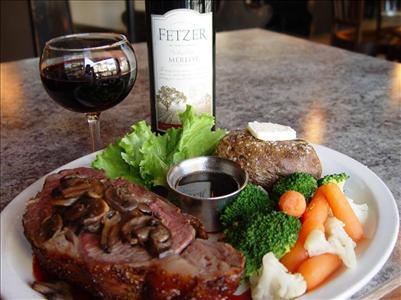 Before we go any further, suppose we wish to sit down for a meal.

It will be hard for anyone to beat Misty's Steakhouse of Lincoln, Nebraska.

Located in downtown since 1964, the reputation of chefs in the Cornhusker state to prepare and serve beef dishes goes without saying.

For our choice of a sit-down dinner near any stadium, it is Misty's Steakhouse.

Now we shall sprint to the finish line with the final four best dishes to have for tailgating.

Ranking near the top is Pizza Bob's in Ann Arbor, Michigan—home of the original Chipati.

What is a Chipati? A whole wheat sandwich that holds lettuce, tomatoes, green peppers, sweet red peppers, mushrooms, cheese, and secret chipati sauce inside their own baked pita bread.

It is an uncanny food experience.

Located literally in the area between the university and the stadium, Pizza Bob's offers pizza for the eclectic taste, along with submarine sandwiches.

Now, if he could just come up with a recipe to beat Jim Tressel. 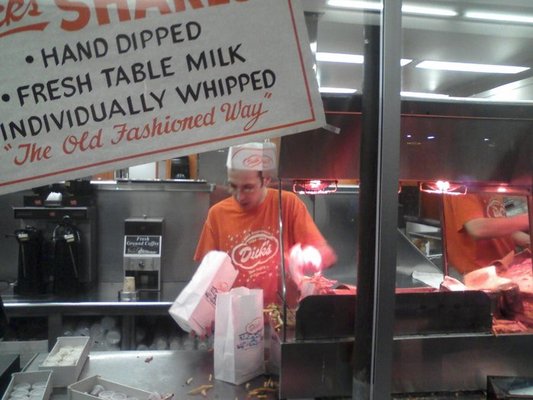 Coffee that influences the tastes of Americans throughout the nation.

Red sails in the sunset as one observes another Husky victory for the all-time winningest program of the Northwest, and the only one that has ever won a national championship in major college football.

So where do we go to obtain our tailgating food?

Located across I-5 from the university and stadium, it is an easy trip over and back, and well worth it.

Husky fans should soon see a return to normalcy in the Pac-10 conference, where they are the kings of the Northwest. 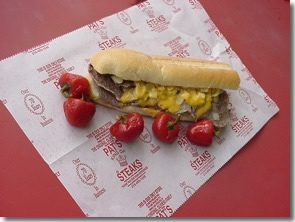 The Philly Cheese Steak from "Pat, The King of Steaks" in Philadelphia.

One of the great experiences, so please step forward to taste the food that is synonymous with a city.

Ranking right below the Liberty Bell as the one of finest attractions in the fabulous city that birthed the nation, Pat, The King of Steaks knows a thing or two about visitors.

"He gets 'em from all 50 states, countries all around the world," said one patron.

It was founded by Pat Olivieri in 1930, owner of a hot dog stand in South Philly. One day he decided to have something quite different for lunch, so he sent for some chopped meat from the butcher shop. He cooked the meat on his hot dog grill, placed the meat onto an Italian roll, and dressed it with some onions.

The steak sandwich was born. As the years passed, cheese was added.

Therefore, we find ourselves with the original Philly Cheese Steak.

The Temple Owls of the Mid-American Conference play at Lincoln Field, which places Pat's on the way from the school, if taking the Highway 611 route.

It is worth the trip. 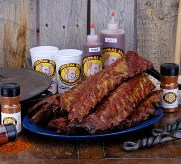 Suppose you visit the Liberty Bowl Game or simply follow the Memphis Tigers. There can be no better food for tailgating than Central BBQ ribs, pulled pork sandwiches, and baked beans.

Memphis is the Shangri-La of barbecue, and Central BBQ is its finest representative.

Let's get one thing straight: Some people in different areas of the country do not know what barbecue is. Can't blame them—they've probably never eaten boiled peanuts either. We won't discriminate; we will educate.

Barbecue is the art of slow-cooking pork meat. In Texas, it is the art of cooking beef brisket. Both are excellent in their own way, as smoke and time are the ingredients of each process.

Cooking a hamburger, hot dog, or steak on a grill is not barbecue. That is simply cooking outside on a grill.

When in the city known as "The Mid-South," one will have the opportunity to visit various top-of-the-line eating establishments. Just don't expect the Memphis Tigers to be invited to play in the postseason Liberty Bowl game.