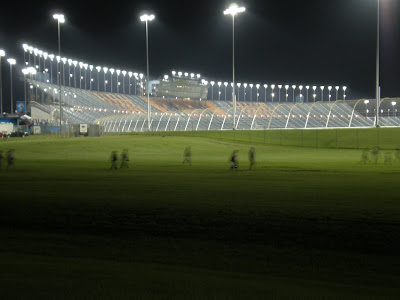 I know it seems odd; the 2010 season has barely begun, but now is time of year NASCAR starts negotiating their schedules for 2011. Every year, the story remains the same—too many tracks, not enough weekends. Storied tracks are trying not to lose dates, but NASCAR is trying to break into new markets.

In the past, NASCAR was simply able to just add dates, but, since 2001, the schedule has been at 36 races, and many think that’s already too much (I am not among them). Adding races is no longer an option.

Still, we have tracks like Kansas, which has been guaranteed a second date. Kentucky has been vying for a race for years, but NASCAR insists on not giving them that date unless the track drops a lawsuit against NASCAR (a suit filed to try and get that date). This year, that lawsuit has been dropped.

So, what is NASCAR to do? I’ve been advocating a rotational schedule for years. Here’s the gist of how it would work:

The NASCAR Sprint Cup Series currently races on 22 tracks. Add Kentucky and we get 23. Add a few more venues drivers love, like Rockingham, Iowa, and perhaps Nashville, and we get 26. If each track got one race, that’s 26 races. The final ten should rotate from year to year.

Tracks that sell out would get preference. NASCAR would consider input from the fans. Localities would have to submit proposals. Maybe they would add some tracks to those 10 races that they would visit on a semi-annual basis—Iowa would be a good choice, maybe Road America.

In this economy, seating capacity probably isn’t an issue. NASCAR took a date away from Rockingham and gave it to California because (in part) California had more seats. Now, California can’t fill those 90,000 seats, and tracks with 120,000 or more seats are in the same boat.

The rotation should be about where racing is the best, where the fan experience is the best, and what the fans across the nation want, regardless of whether they live by that track or not.

Every year, this rotation might change. It could be on a three-year basis—every track that wants a second date will get it every third year.

This isn’t going to appease everyone, but neither will a traditional schedule. Not everyone can have two dates.

The Camping World Truck Series can benefit especially from a rotational schedule. The popularity of the trucks has been waning, which is unfortunate because they have some of the best racing in NASCAR.

Or has it? Their ratings on SPEED have been steadily growing, while the Nationwide and Cup ratings have been shrinking.

What makes it look like they’re losing popularity is the number of fans in attendance. When the trucks race on a standalone weekend at a track built for 120,000, the stands look exponentially more empty when only 15,000-20,000 fans show up.

But, when the series races by itself, or not as a Sprint Cup companion event, they should not be at track built for 120,000. They should be at a track where neither the Sprint Cup Series nor Nationwide Series race. Perhaps, they could also visit some local short tracks that can attract hoards of curious locals because, let’s face it; the Truck Series isn’t going to attract RV’s from across the country for a standalone event.

Other NASCAR Notes:
I’m tremendously excited to see Kasey Kahne’s possibilites at Hendrick Motorsports. Darrell Waltrip put it best—he’s one of the most talented drivers in the sport and is in the prime of his career, but his Richard Petty Motorsports team is unable to support him, no matter the strides they’ve made this year. He can’t spend his prime years driving for a team that is defaulting on loans.

I hope his crew chief, Kenny Francis, can go with him. Kasey and Kenny have a great relationship—in the turmoil at RPM last year, Kenny and Kasey’s working relationship was about the only thing going for them. Larry McReynolds told him to grab Kenny and hold on as tight as he could.

If Kenny and Kasey get together at Hendrick, I think there’s a chance they could become the new Chad and Jimmie.

Can they stay healthy? Will Gary Sanchez turn it around? @abbeymastracco unpacks the biggest storylines for the Bronx Bombers 📲

Garnett opens up on beating Kobe in the Finals, their relationship growing up and more in 'Uncensored.' Read an excerpt now 📲