Two days after closing their facilities because of two positive COVID-19 tests from a coach and clubhouse staffer, the Philadelphia Phillies learned that some of those results were inaccurate.

MLB announced in a statement that "it appears that two" of the team's three positive tests were false positives and that "it is unclear if the third individual contracted COVID-19 from Marlins players and staff based on the timing of the positive test."

The Phillies haven't played since their season-opening series against the Miami Marlins from July 24-26.

Prior to the final game of that series, MLB Network's Jon Heyman reported Marlins starting pitcher Jose Urena was scratched from his scheduled start because of a positive test.

As of Friday, ESPN's Jesse Rogers reported the Marlins have had 21 members of their traveling party test positive for COVID-19 in the past week.

While the Phillies haven't had any players test positive for the virus since their series against the Marlins, Rob Maaddi of the Associated Press (h/t NBC Philadelphia) reported on July 29 that a visiting clubhouse staffer did return a positive test.

Passan noted the two false positives would allow the Phillies to take their incubation period back to their final game against the Marlins.

Phillies Return from Layoff, Lose to Cole and Yankees 6-3 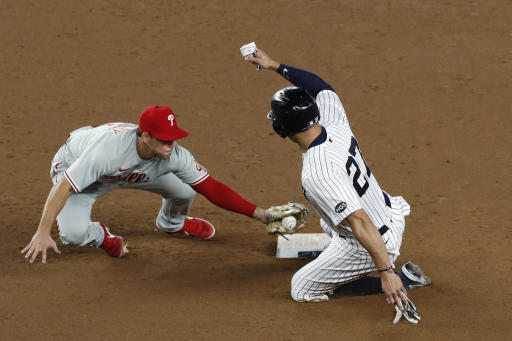 Phillies Return from Layoff, Lose to Cole and Yankees 6-3