The NBA is reportedly investigating the activities of Los Angeles Clippers guard Lou Williams during his excused absence from the bubble near Orlando, Florida, as the league looks to determine how long he needs to be re-quarantined, according to ESPN's Ramona Shelburne and Bobby Marks.

Sources told ESPN that Williams has been interviewed by NBA security about his whereabouts while he was away from campus, and told them he did go to the Magic City gentleman’s club for a short time on Thursday night

However, as @ZachLowe_NBA recently noted, that re-quarantining time could be extended up to 10 days if the league's outside infectious disease specialists recommends it.

Lou Williams tweeted a photo Friday of a man named, Paul G. Willams, with the caption "Long Live Pops,." Sources said Williams told NBA investigators that he attended a viewing for Williams which ended around 6 p.m. on Thursday, then went to Magic City to pick up dinner.

Lou Williams just posted this on his IG story https://t.co/1VOG2M7brw

As ESPN's Bobby Marks noted, a four-day quarantine would mean that Williams would be able to rejoin the Clippers in time for their first game of the restart July 30 against the Lakers. If he's forced to quarantine for 10 days, however, he would miss the team's first two games and miss out on $150,000 in salary.

Clippers head coach Doc Rivers told Brad Turner of the Los Angeles Times that Williams was back with the team in Orlando but the organization wasn't happy to see those pictures surface online.

"Obviously those got out and that's something we obviously didn't enjoy seeing or like," he said.

With Patrick Beverley and Montrezl Harrell also leaving the bubble for personal reasons and Landry Shamet and Ivica Zubac not traveling with the team to Orlando earlier this month—and all needing to quarantine upon their arrival—the Clippers could be starting the season's resumption rather short-handed: 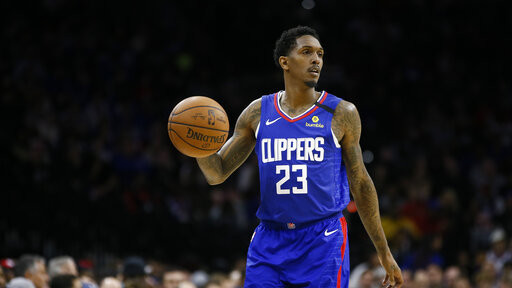 With Lou Williams, Patrick Beverley and Montrezl Harrell, Ivica Zubac and Landry Shamet all having to quarantine upon their arrival, Doc Rivers was asked if he will have a full roster for July 30 vs Lakers: "My guess is I would doubt it but I have no idea."

That shouldn't matter too much beyond potential seeding repercussions. At 44-20, the Clippers have clinched a playoff berth and currently sit as the No. 2 team in the Western Conference. It's unlikely they'll make up the 5.5 games they trail the Lakers by, leaving them to hold off the Denver Nuggets (1.5 games back of the Clippers) and the Utah Jazz (2.5 games back) for the No. 2 seed.

Where it could affect them is getting back into a rhythm playing together ahead of the postseason, however. Few teams head into the restart with more key players potentially forced to miss time than the Clippers.