A passionate Doc Rivers challenged Sen. Josh Hawley to acknowledge Black Lives Matter. “Whenever we talk about justice, people try to change the message. Colin Kaepernick kneels; it had nothing to do with the troops. It had to do with social injustice.” Here’s his entire answer: https://t.co/aerIrARwGy

"There's no league that does more for the military than the NBA," Rivers said. "But how about that senator? I'll make a challenge. We will do things for the troops as long as he acknowledges Black Lives Matter. I think that will be really cool for him to do."

Hawley, a Republican junior Senator from Missouri, recently made news after posting ESPN NBA reporter Adrian Wojnarowski's response to a press release in which the senator said the league was "kowtowing to Beijing" and "refusing to support U.S. military and law enforcement."

If @NBA is going to put social cause statements on uniforms, why not “Support our Troops” or “Back the Blue”? Or given how much $$ @nba makes in #China, how about “Free Hong Kong”! Today I wrote to Adam Silver to ask for answers https://t.co/PthYR4OxmE

The NBA is restarting its season on July 30 in Walt Disney World near Orlando, Florida, following a four-month suspension due to the COVID-19 pandemic.

"Black Lives Matter" will be painted on all three courts where games will take place, and players can choose from 29 social justice messages to place on the backs of their jerseys in lieu of their names.

Rivers and the Clippers will open an eight-game regular-season finish against the Los Angeles Lakers before taking part in the postseason. 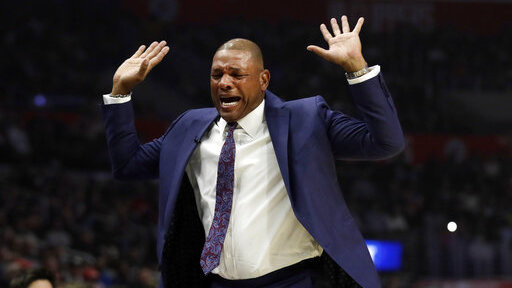