The basketball world is buzzing, as NBA teams arrive in the Orlando-based bubble ahead of the 2019-20 season's restart.

There's an update on a coaching search in a major market, a possible journey overseas for a future Hall of Famer and a trade idea to help a recent dynasty get its groove back.

Let's dive in for a closer look.

Despite an active interview process, New York's coaching search has often been treated as a one-person race. Tom Thibodeau, who has connections with Knicks President Leon Rose through the Creative Artists Agency, is the favorite to slide into the coach's chair inside Madison Square Garden.

But Thibs has some competition, and former Knicks point guard Jason Kidd could be leading the charge.

A natural leader who carried an authoritative voice during his 2012-13 run with the Knicks, Kidd could disperse myriad tricks of the trade onto the team's young talent. He also shares a strong connection with Giannis Antetokounmpo, whom he coached in Milwaukee and the Knicks could court in 2021 free agency. 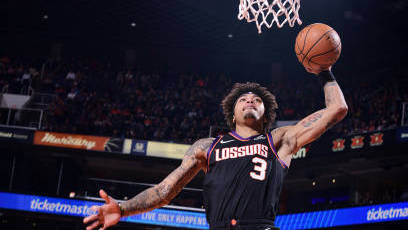 That's not enough to move Kidd to the front of the line just yet, but it doesn't take too much imagination to see how he might eventually get there.

Pau Gasol Going Back to Barcelona?

Before Pau Gasol arrived as the third overall pick in 2001 and ascended to All-Star status in the NBA, he started his journey in Barcelona, Spain. With the 40-year-old now on the last leg of his playing career, he could take his hoops tour full circle with a return overseas.

The six-time NBA All-Star and two-time champion is reportedly "near an agreement in principle" on a one-year contract with Barcelona, per EuroHoops.net's Nikos Varlas. The deal "is expected to get finalized later in the summer" and would serve as a bridge for Gasol to a final Olympic run in Tokyo.

This might all hinge on health, as a nagging foot injury has kept him off the floor for over a year. He last suited up in March 2019, and he was waived by the Portland Trail Blazers in November before ever making an appearance for them. He previously broached the idea of a Barcelona return if he could get healthy.

"My intention is to play another season if the foot is OK, either in the NBA or in Europe," he told reporters in June. "A final season with the Lakers is attractive, finishing at Barça is attractive, but you have to see the real possibilities and see what situation would be best for the circumstances of the moment."

Gasol won both of his NBA championships for the Los Angeles Lakers and also suited up for the Memphis Grizzlies, Chicago Bulls, San Antonio Spurs and Milwaukee Bucks. Before that, he opened his professional career with his hometown team of Barcelona, where he played from 1998 to 2001.

If everything goes according to plan for the Golden State Warriors, they could make the leap from worst to first with a full-strength roster next season. That might sound impossible for a 15-50 squad, but remember, the Dubs have been without Klay Thompson all year and only got five games out of Stephen Curry.

Slot those two alongside Draymond Green and Andrew Wiggins, and this team is at least back in the contending field. It's tough to tell how a rookie will factor into those plans, so Golden State has admitted it could shop its first-round pick in the 2020 draft.

"Yeah, we're going to consider all that," president of basketball operations Bob Myers said, per Monte Poole of NBC Sports. "Now, I don't know if the headline is going to be that we're trading our pick. So, be clear that I said 'consider.'"

If the Dubs do put that draft pick on the table, The Athletic's Anthony Slater opined they could consider packaging it with a trade exception in a deal for Kelly Oubre Jr. and the Phoenix Suns' first-rounder:

"That presents a win-win pick swap scenario: Phoenix jumps up to get the prospect whose timeline and controllable contract pair perfectly with their young core, the Warriors walk away on draft night with at least a season of Oubre ... and a later lottery prospect they still believe will develop into a valued long-term core member."

It's an interesting idea, as Oubre's athleticism and three-and-D game would help fill out a pretty top-heavy roster in Golden State. While not quite a knockdown shooter, the 24-year-old is enjoying a career campaign in three-point makes (1.9 a night) and percentage (35.2).

Saying that, it's unclear if Phoenix would want to turn a starting player into a draft pick after finally showing signs of life this season. But it could work for two reasons, either the Suns falling in love with a prospect who's out of their draft range or feeling apprehensive about Oubre's trip to 2021 unrestricted free agency.