While Washington's NFL team and Cleveland's MLB team are considering changing their offensive nicknames, the Atlanta Braves are not entertaining the possibility of a new moniker.

According to Ken Rosenthal of The Athletic, "The Braves do not intend to change their name, though discussions about the team's use of the 'Tomahawk Chop' are ongoing, sources said."

"The Atlanta Braves honor, support and value the Native American community. That will never change," the team said in a statement Saturday. "... We have much work to do on and off the field, but the Atlanta Braves are ready to meet the challenge of these times."

Before Game 2 of a 2019 National League Division Series against Atlanta, St. Louis Cardinals reliever Ryan Helsley—a member of the Cherokee Nation—said he found the chant "disrespectful," per Derrick Goold of the St. Louis Post-Dispatch:

"I think it's a misrepresentation of the Cherokee people or Native Americans in general. Just depicts them in this kind of caveman-type people way who aren't intellectual. They are a lot more than that. It's not me being offended by the whole mascot thing. It's not. It's about the misconception of us, the Native Americans, and it devalues us and how we're perceived in that way, or used as mascots. The Redskins and stuff like that.

"That's the disappointing part. That stuff like this still goes on. It's just disrespectful, I think." 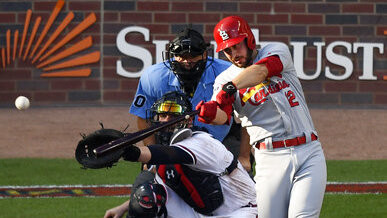 Atlanta responded by not distributing foam tomahawks before Game 5 and said it wouldn't play the "Tomahawk Chop" music when Helsley took the mound. National Congress of American Indians CEO Kevin Allis told Rosenthal the team has been in contact with the NCAI since February.

"The Atlanta Braves have been in active dialogue with NCAI, and have made it a priority to work with us in addressing existing concerns around Native themed mascots and team names," he said. "NCAI is grateful and very appreciative of this effort, and will continue to work with the team in finding meaningful and genuine solutions."

"NCAI is extremely encouraged by the efforts of athletic teams at the major league, college, and high school level that understand the harm to American Indians and their communities caused by mascots and team names. Such imagery creates misperceptions and unfair stereotypes of the American Indian, tramples on sacred customs and traditions, and results in American Indians not being viewed as equals in our society. Painful disrespect is often seen when fans don themselves in ceremonial regalia, war paint, and shout made up chants with little or no understanding of the importance and stature of such within the American Indian communities across the country.

"We welcome and applaud the efforts to address this important issue by the Cleveland baseball team, and all other organizations in similar situations."

As the conversation continues about sports teams that have used Native American culture and iconography for nicknames, mascots or celebrations, Atlanta—and other teams such as the NFL's Kansas City Chiefs and the NBA's Golden State Warriors—will be a part of it.

Takeaways from the First Two Weeks of the Season

Takeaways from the First Two Weeks of the Season

If This Is the New Touki Toussaint, the Braves Will Be Just Fine

If This Is the New Touki Toussaint, the Braves Will Be Just Fine