The NBA is apparently thinking well outside the box to compensate for the absence of fans were it to stage games in empty arenas at Walt Disney World in Orlando, Florida.

Dallas Mavericks owner Mark Cuban told the New York Post's Steve Serby the league is looking into ways to provide some kind of in-arena atmosphere. Among the ideas is an app that would allow fans to broadcast the noise they're making at home to the games themselves:

"It will be different for certain. But there will be a lot of technology we will be experimenting with to try to introduce noise and make the event more entertaining for players and TV viewers. We have been having a lot of fun with apps that allow fans to push noise they make at home into the arena. So not only will there be competition on the court, there will be competition from fans to contribute energy as well!"

The NBA's Board of Governors approved a plan to stage games in Orlando to finish up the 2019-20 season. While that allows the league to set up its bubble in one central location, it spoils what can be a big factor in the playoffs: home-court advantage.

ESPN's Dave McMenamin reported one proposal was to have higher-seeded teams bring the physical court from their home arena. McMenamin added that hotel selection could be a component of the formula, which appears to have come to fruition in some form.

According to Shams Charania of The Athletic and Stadium, accommodations are broken down by seeding: 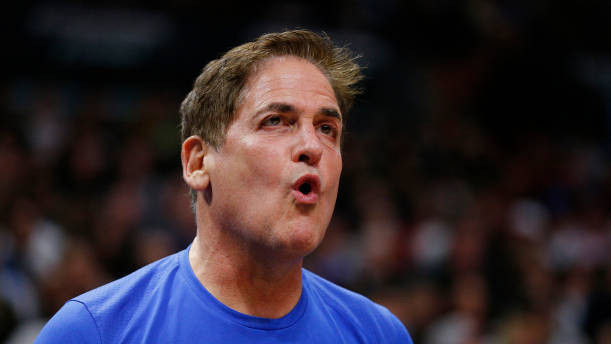 Allowing fans to remotely cheer on teams could be another way to create a home-court vibe, but the specifics of the app referenced by Cuban remain unclear.

Meanwhile in Denmark, fans of AGF Aarhus have been supporting their team via Zoom 💻🙌 https://t.co/ki3MFaJEnd

German Bundesliga side Borussia Monchengladbach allowed supporters to purchase a cardboard cutout of themselves that would then be placed in Borussia-Park:

The Premier League is BACK on BT Sport @btsportfootball

Borussia Mönchengladbach's cardboard cut out fans are something else! 🙌 12,000 in the stadium so far, and 20,000 have been ordered. Impressive numbers 👏👏👏 #BundesligaIsBack https://t.co/2fu225qbXG

On a smaller scale, during the 2020 NFL draft, a group of fans from each team was shown remotely as commissioner Roger Goodell announced a pick:

Watching NBA games in empty venues will be a jarring experience at first. The league might as well explore whatever options it can to make games more presentable for television viewers.