After a breakout season at Ohio State, Justin Fields has caught the eye of scouts looking forward to the 2021 NFL draft. Daniel Jeremiah of NFL Network thinks highly of the quarterback, comparing him to Dallas Cowboys star Dak Prescott:

"I see a lot of similarities to Dak Prescott when he was coming out of Mississippi State. Both play the position with a physicality and toughness that I admire. Dak was similarly effective in the QB run game, and they both possess the playmaking skills to bail out a bad play call. Dak made tremendous strides as a passer during his final season in college, and I expect to see similar improvement from Fields in 2020."

Though Prescott was just a fourth-round pick in 2016, he went onto win the Offensive Rookie of the Year award that season, adding two Pro Bowls to his resume. He finished second in the NFL with 4,902 passing yards in 2019.

Reaching this height would be quite an achievement for Fields, regardless of where he is drafted.

Bleacher Report's Matt Miller predicted Fields would be a first-round pick next offseason, mocking him to the Chicago Bears with the No. 13 pick. 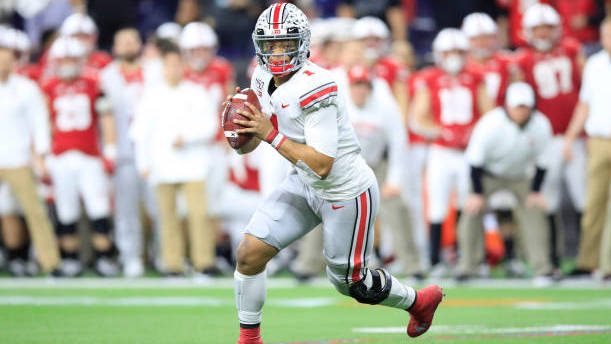 The 6'3", 223-pound quarterback was a 5-star recruit out of high school but saw little action as a freshman at Georgia before transferring to Ohio State. He lived up to his potential in 2019, totaling 41 touchdown passes with just three interceptions in 14 games.

His 484 rushing yards and 10 touchdowns also helped him finish third in voting for the Heisman Trophy.

The ability to make a difference with his arm and legs could make him an elite quarterback at the next level.

Fields is close to the same size as Prescott (6'2", 238 lbs.) while both are effective running the ball. Prescott is averaging 305 rushing yards and over five touchdowns per season in the NFL, but he was even more dangerous at the college level. The quarterback totaled 2,403 rushing yards and 37 touchdowns in his last three years at Mississippi State.

A similar skill set could help Fields replicate Prescott's production both in college and the NFL.

Though Jeremiah believes the Buckeyes player must improve his vision and blitz recognition, it's a minimal concern for someone with just one year of starting experience. His upside remains as high as nearly anyone at the college level.