Andre Drummond will exercise his player option with the Cleveland Cavaliers worth $28.7 million for 2020-21.

On Tuesday's Le Batard & Friends—STUpodity podcast (via ESPN.com), Drummond said he "definitely will be in Cleveland" next season: "Yeah, it's going to be hard to give up, so you can count on me being in Cleveland still."

The center was traded to the Cavaliers ahead of the 2020 deadline for John Henson, Brandon Knight and a 2023 second-round draft pick.

In eight appearances for Cleveland this season, he averaged 17.5 points and 11.1 rebounds per game.

The bulk of Drummond's career has come with the Detroit Pistons, with whom he earned two All-Star selections and led the league in rebounding three times over parts of eight seasons.

Before the midseason trade, he was averaging a career-high 17.8 points and an NBA-best 15.8 rebounds, adding 2.0 steals and 1.7 blocks per game.

The 6'10", 279-pounder has been a force inside throughout his career on both ends of the court, especially on defense. 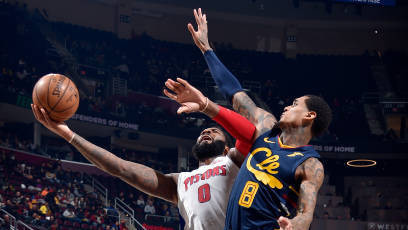 Though he comes at a high price, the 26-year-old will continue to help Cleveland during its rebuild.

Drummond and Kevin Love should form a solid frontcourt tandem, while young players like Collin Sexton and Darius Garland should have plenty of room to operate on the perimeter.

The Cavaliers should also have more financial flexibility with Tristan Thompson and Matthew Dellavedova coming off the books after this season, even with another year of Drummond.