It doesn't look like Tom Brady and Antonio Brown will be getting back together in Tampa Bay.

Tampa Bay Buccaneers head coach Bruce Arians shot the idea down during an interview with Tiki & Tierney on Thursday.

Arians also went on to say Brown is "not a fit in our locker room."

Arians' position is not all that surprising considering last Thursday's report from Ian Rapoport of NFL Network suggesting the head coach didn't enjoy his previous time with Antonio Brown when he was the offensive coordinator of the Pittsburgh Steelers:

New #Bucs QB Tom Brady may want to bring Antonio Brown with him to Tampa Bay, but it doesn't sound like coach Bruce Arians enjoyed his previous time with AB. https://t.co/HivirRnQAV

Brown played one game for the New England Patriots last season and caught a touchdown pass from Brady in a victory over the Miami Dolphins before being cut by the team.

Brown is currently under NFL investigation after his former trainer accused him of rape and sexual assault in a lawsuit. Another woman accused him of sexual misconduct and then said he sent her threatening text messages following the first accusation, per Sports Illustrated. The Patriots released Brown shortly after the Sports Illustrated reports.

In January, Cameron Wolfe of ESPN.com reported Brown turned himself in to Broward County Jail while facing charges of felony burglary with battery, burglary of an unoccupied conveyance and criminal mischief stemming for an alleged assault of a moving truck driver.

Brady recently tweeted a message of support to Brown:

On the surface, the idea of adding Brown to a wide receiver corps that already features Mike Evans and Chris Godwin is surely intriguing. After all, Evans and Godwin both went over 1,000 yards last year, and Brown is a seven-time Pro Bowler and four-time All-Pro selection who is one of the best playmakers of his generation. 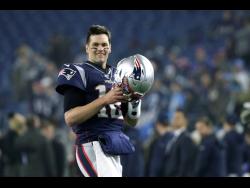 Jameis Winston on being replaced by Tom Brady: 'I guess that's kudos to me'

Jameis Winston on being replaced by Tom Brady: 'I guess that's kudos to me'

Tom Brady Will Be Chasing Stats, Not Wins

Tom Brady Will Be Chasing Stats, Not Wins

Lee DeLapp
via AM 570 LA Sports