Even though his team lost the 2020 NBA All-Star Game, Giannis Antetokounmpo made sure his charity was taken care of this weekend.

The Milwaukee Bucks star and the rest of Team Giannis have pledged $100,000 to After School Matters:

Thank you @Aftrschoolmttrs for your energy as you inspired us. It was an honor to play for you. On behalf of our team, we’re going to donate another $100k to support your great work. Keep it up! https://t.co/oJr3bUZXc9

Antetokounmpo chose to represent the Chicago charity in the mid-season showcase, earning $100,000 from the NBA after winning the second quarter of the game. Team LeBron secured $400,000 for Chicago Scholars after its 157-155 win, via K.C. Johnson of NBC Sports.

The latest donations ensured After School Matters will receive $200,000 despite the on-court result.

It was the first year the two All-Star teams were playing on behalf of charities, which were picked by team captains LeBron James and Antetokounmpo.

Giannis explained his decision to pick After School Matters earlier this month:

The non-profit provides teenagers with activities and academic programs to take part in after school and during the summer months. 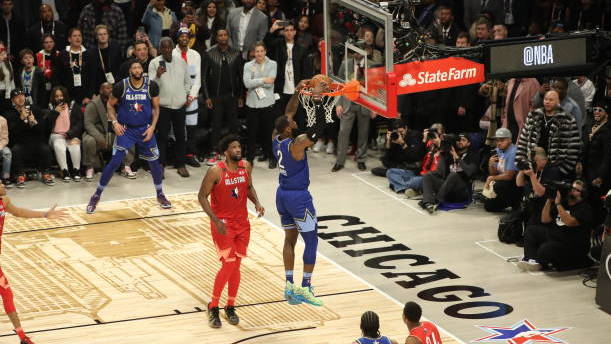 In addition to the donations, the program members were able to attend the game at the United Center in Chicago:

Many thanks to @Giannis_an34, and @nbacares What an amazing night for the teens at After School Matters! #NBAAllStar #ASMAllStars @NBAAllStar https://t.co/fCIxczfBHY

The teenagers from both sides helped create some extra excitement throughout the game and seemingly a lot of intensity on the court during the fourth quarter.

Only one of the teams could win, but at least the charities each benefited with six-figure donations.