Wisconsin guard Brad Davison has been suspended one game for striking Iowa's Connor McCaffery in the pelvic region as he fought past a screen during Monday's 68-62 loss, according to Jeff Borzello of ESPN.

Davison was hit with a flagrant 1 foul during the game for his actions.

"He grabbed me right in the—where you don't want to be grabbed in," McCaffery said about the play in question, per Mike Hlas of The Gazette. "He does that. He's marked for doing that. He's the type of player, unfortunately, who feels the need to do that stuff. Tonight he cost them the game."

The play occurred with 32 seconds left, while Joe Wieskamp was scoring a key bucket to put the Hawkeyes up 62-59. The Hawkeyes were given two free throws, making one, and also got the ball back.

Davison has earned a reputation for breaking the rules. As Ricky O'Donnell of SB Nation wrote, "It is hard to give Davison the benefit of the doubt at this point. He's pulled the junk-shot-while-trying-to-get-around-a-screen move before. He has appeared to trip opponents. He once took five charges in a game, and won a game for the Badgers by flopping on an inbounds pass."

The junior is averaging 8.8 points, 4.6 rebounds and 1.7 assists per game, shooting just 37.6 percent from the field and 31 percent from three this season. All of those numbers except for his rebounds are career lows.

Wisconsin will now be without both Davison and Kobe King against Michigan State. King announced on Wednesday that he was leaving the program. 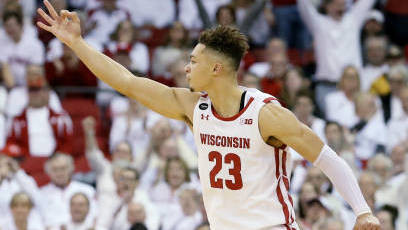