After colliding with a cameraman on the baseline last month, Memphis Grizzlies guard Ja Morant wants the NBA to move the camera operators to provide more space for the players.

"I just think player safety should be first and foremost," Morant said, per Chris Haynes of Yahoo Sports. "How I play and where I end up, [cameramen] are right there. Personally, I like to attack the rack, and I feel like that injury came from me attacking the rack and it was just nowhere to land for me."

The original injury came on Nov. 25 when he took a knee to the back on the baseline after attempting a shot. He returned to the lineup but eventually missed four games due to back spasms before returning Monday night.

When the injury flared up, he began arguing for the change on Twitter:

let’s move the cameramen back 🤝@NBA

Though he appeared over his injury with 26 points and seven assists in a win over the Golden State Warriors on Monday, he explained that he has become tentative driving to the basket. 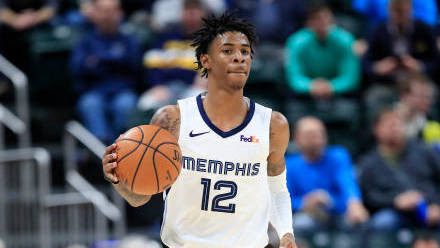 "It's tough because I know I just have to do more controlled jumps now," Morant said. "But at the same time, I'm just trying not to think about it and still try to play my game. It's just a tough situation all the way around, honestly."

The rookie has dazzled when on the court this season, averaging 19.1 points and 6.4 assists while becoming a favorite for the league's Rookie of the Year award. Though he's just 18 games into his career, Morant is quickly showing he belongs among the league's bright young stars.

The last thing the NBA needs is players of this caliber suffering injuries in avoidable incidents.

"I'm not sure what needs to happen," Morant said, "but I would think the league, especially if players are getting injured, would be considering their options."

Penny Hardaway challenges Ja Morant, Tracy McGrady, Yo Gotti and others to 'pledge to vote' in November

Penny Hardaway challenges Ja Morant, Tracy McGrady, Yo Gotti and others to 'pledge to vote' in November