USC quarterback JT Daniels, who suffered a season-ending torn ACL and meniscus in Week 1 against Fresno State, will return to school next season and compete for the starting job with Kedon Slovis.

Steve Daniels, who is JT's father, relayed the information to Greg Biggins of 247Sports:

"JT is definitely staying. He's happy for [USC head coach Clay Helton] and has a great relationship with him but to be honest, no matter what happened with the coaching situation, JT was going to stay and compete. He loves it at SC, he has an SC tattoo on his leg so he's pretty committed to the program.

"He's a very competitive kid and has never run from a challenge before. Kedon played really well and JT was happy for him but at the same time, JT is a competitor and once he's back to 100%, he wants to compete for that job."

The news of Daniels' return comes after USC athletic director Mike Bohn announced that head coach Clay Helton will be coming back for the 2020 season.

The Trojans just finished an 8-4 regular season after going 5-7 the year before.

Daniels started for the Trojans as a true freshman in 2018, completing 59.5 percent of his passes for 14 touchdowns and 10 interceptions.

The quarterback looked as though he was primed for a huge leap in year two, however. Ryan Kartje of the Los Angeles Times spoke with USC coaches and players who noted that the signal-caller looked "more relaxed" in the system run by new offensive coordinator Graham Harrell.

Daniels also put himself into a strict offseason training regimen, per Kartje, which included a diet change, blood testing and sessions with a mental conditioning consultant.

He looked much improved against Fresno State, completing 25 of 34 passes for 215 yards, one touchdown and one interception. Unfortunately, an awkward sack forced Daniels to the sideline for the remainder of 2019.

Slovis has done well in his place, completing 71.8 percent of his pass attempts for 28 touchdowns and nine interceptions. The Trojans won five of their last six regular-season games with Slovis behind center.

The intrigue now is whether Slovis or Daniels will be calling signals in 2020. For his part, Daniels seems on track for a healthy return, per his father:

"He had the surgery in September and his goal is to make it back in 10 months. He's doing double time in his rehab, every morning and again after school. Then he goes out and catches an hour of practice just to stay connected with the team and be supportive of the players.

"He's very excited though and so driven, I've never seen him more motivated before. He obviously won't be back by spring ball but if it's a 10 month recovery, that puts him back by July and in time for fall camp. He's going to be supportive and a great teammate regardless like he was this past year but he's excited about the opportunity as well so we'll see what happens."

Whoever starts in 2020 has a rough opening test, as the Alabama Crimson Tide await on Sept. 5. 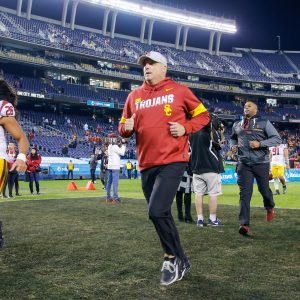 If there is a 2020 season, USC now has far fewer excuses

If there is a 2020 season, USC now has far fewer excuses