Tyler Glasnow sat by his locker and glanced at the TV, and then at the local media standing nearby, and nobody said a word. It was late July, a little more than a year ago, and his career was spiraling downward. He'd been relegated to long-relief duty, baseball's most inglorious role, where his lack of confidence and control had followed him. He'd walked four batters over three innings his last time out. He was only 24 years old, but he seemed to be aging quickly.

At one time, Glasnow was a consensus top prospect, ranked ahead of Aaron Judge and Blake Snell, the reigning AL Cy Young winner. But after his major league call-up, Glasnow struggled greatly: an ERA over 4.00 as a rookie and then an unsightly 7.69 mark as a sophomore. The shine was wearing off.

This was his third year, and in the Pirates clubhouse, the TV was airing MLB Network. It was trade deadline day. In the early afternoon, a deal broke across the screen. The Pirates were acquiring Chris Archer from Tampa Bay.

Hmm, Glasnow thought. He began to do the math. Archer is a pitcher, and he is too, and there might be a match there. He stayed seated. A minute later, the details came in: It was Archer to Pittsburgh for outfielder Austin Meadows, Glasnow and a player to be named later (Shane Baz).

The Pirates clubhouse was silent. Reporters shuffled awkwardly. Glasnow wasn't sure what to do, either. Below the surface, though, he was celebrating. Failure and bad vibes had mounted in Pittsburgh. "I was pretty stoked to be traded," he says now.

This season, one year removed from the midseason deal that brought him here, and two years removed from his near-flameout, Glasnow is at the top of his class. Before he was sidelined with a forearm strain in May, his ERA (1.86) and WHIP (0.91) stood as the best in the American League.

For the season, he's struck out over a third of opposing batters, a Justin Verlander-esque rate. And where once Glasnow lacked the confidence to throw strikes, his strikeout-to-walk ratio is a tick better than that of Chris Sale and Jacob deGrom.

On Sept. 8, after four months on the injured list, Glasnow returned in his old form. His second pitch registered at 100.2 mph; he punched out five across two innings. The Rays are now 3-0 in games he's pitched since returning from the injured list, crucial wins in the tight AL wild-card race. It's easy to imagine the damage Glasnow could inflict on postseason teams.

At 6'8", he throws his heater faster than all starters but Noah Syndergaard and Gerrit Cole. His curve, which he buries down in the zone, is among the league's fastest as well. Opponents have a collective .534 OPS against him this year. He has effectively turned a record-setting league of sluggers into feckless backup catchers.

It's an amazing turnaround for a pitcher whose career nearly went bust. But this is not a revival story based on the usual factors, like newfound health or the discovery of a reliable pitch. To hear Glasnow explain it, the change has been entirely mental—all he did was psych himself into becoming a Cy Young-caliber arm.

At 6'8" and armed with one of the game's best fastballs, Tyler Glasnow has struck out 11.5 batters per nine innings this season.Julio Aguilar/Getty Images

"Everything starts with a thought," he likes to say. "You can fake confidence, fake a mentality. And if you walk tall and convince yourself you're confident, your mind starts to think it. The more nervous I am before a start, that's the most important time to be like, 'Nope, I'm the man, doesn't matter.' Just convince yourself that it's your day, and no one can touch you."

In the mornings, Glasnow meditates—four deep breaths and then a half-hour spent watching his thoughts move around him. Doubts creep in, especially about baseball, but he lets those notions fly by without feeding into them, or without "judging" them.

"The mind can be manipulated," he says. "The second I wake up, the whole day is dedicated to me convincing myself I'm the best person on the field."

In Tampa, Glasnow has found a welcoming environment and even a spiritual adviser. His clubhouse neighbor is Snell, who credits his own career breakthrough to a psychological adjustment. "Your mind is very powerful, man," Snell says. When Glasnow first arrived in Tampa, Snell was in the midst of a Cy Young season, and Glasnow wanted to know his secret.

Snell swore it was all mental. "Last year I just said, 'I'm doing it.' There was no ifs, ands or buts in my head," Snell says. "Tyler just needed to find what motivated him, what made him be the best him."

At first, the advice puzzled Glasnow. He'd been looking for mechanical tips or a new pitch grip—this was a little abstract. But Snell kept hammering the same message—to have faith and stay calm while pitching—and Glasnow began to come around. "As I started to experiment with it, I was like, 'That's it!'" he says. "That's the ticket right there."

On the mound, where Glasnow used to come undone so easily, he has relaxed, though perhaps he had to fail first to do it. "Everyone has something holding them back, and mine was fear of failure," he says. "I started to realize, 'Oh, my biggest fear happened and I'm still alive. Don't freak out so much, you're fine.'"

In meetings with pitching coach Kyle Snyder, Glasnow was encouraged to pound the strike zone. "It's just a matter of saying, 'Y'know what, hitting is difficult, and hitting is particularly difficult against you,'" Snyder recalls telling Glasnow.

Immediately, he cut his walk rate nearly in half and finished last season strong, punching out 64 batters over 55.2 innings. Throughout this year's breakout, his control has only improved. There was never a doubt that Glasnow possessed dangerous stuff. Now he has the conviction to weaponize it.

Glasnow credits his jump in effectiveness more to the mindset he absorbed from teammates than any technical advice.Photo by Edward Linsmier for B/R

"The biggest adjustment," says teammate Matt Duffy, "was just like, stand tall and throw the shit out of it."

Growing up in Newhall, California, about a half-hour north of L.A., Glasnow rarely watched baseball. "It was just boring and slow to me," he says. Instead of watching the Dodgers, he watched skate videos. Instead of idolizing Clayton Kershaw or Eric Gagne, it was pro skaters, like Andrew Reynolds and Antwuan Dixon.

Were he not a baseball player, Glasnow might be mistaken for a skater himself. On a summer afternoon in Tampa, he's wearing red skater shoes with beige pants that bunch up around the ankles and a white Henley. His hair is parted down the middle and drops down to his shoulders. His speech is a mix of baseball slang and skater cool, often punctuated with a "dude." Jose Alvarado, the Rays' power reliever, is "disgusting, dude." On a recent day, "he shoved." Glasnow is good-spirited—when he was traded to the Rays last year, they told him he'd be pitching for them the very next day. "I was like, 'What?! Aw, OK, cool.'"

Says Duffy, "He takes his work very seriously, but he doesn't take himself too seriously."

Glasnow is a huge rap fan—the evidence is all over his body. On his lower lip, a tattoo reads, "No Juice," a Lil Boosie song. On the bottom of his right foot, there's a fading tattooed portrait of Ol' Dirty Bastard, the late Wu-Tang Clan member. Glasnow developed a love for rap early on, starting with Eminem. He would hide the CDs under his pillow at night and play them on repeat on his Discman throughout the day. "It was a little bit of forbiddenness when I was little," he says.

Glasnow attended high school with Reds pitcher Trevor Bauer, who remembers him as a class clown. "I say that in the most complimentary way possible," Bauer adds. "He seemed to have a very fun-loving personality and get along with people very easily."

Glasnow still calls himself a "goofy human being," though in recent years he's developed his intellectual side.

"He's his own psychologist a little bit and can be for other guys as well," says Duffy, who is not just Glasnow's teammate but also his roommate. The two of them live in a house on the bay that they rent from former Rays star Evan Longoria. Often, Glasnow and Duffy will talk deep into the night, philosophizing about the game and their place in it.

Glasnow is a fervent reader of Malcolm Gladwell—"thinking books," he calls them—and he rips through podcasts, especially in recent months as he rehabbed his throwing arm. "He's just very thoughtful, and there's a lot more to him than just baseball," Duffy says. "He spends a lot of time sitting and pondering."

Over the winter, Glasnow pondered Bauer's arbitration case, for instance, sitting in and observing the exchange of stats and opinions and even researching for Bauer's camp. "I've always been really interested in the numbers in arbitration," he says. He recalls spending entire days—1 p.m. to midnight, by his estimation—studying Bauer's statistics.

"I was surprised at how interested he was in knowing the behind-the-scenes process and the inner workings of the process," says Bauer, who won his case against his old Cleveland Indians team. "I'm not sure why I was surprised by this—perhaps I still had the goofy kid from high school in mind—but it was very refreshing to talk to a young, budding MLB star who was engaged in his career, the current state of baseball and the future of the game."

Glasnow also studies his own game; like Bauer, he is a believer in analytics. Since arriving in Tampa, he has leaned heavily on edgertronic high-speed cameras that capture his mechanics, to be reviewed frame by frame, and produce data sets. The cameras showed why Glasnow's heater carried natural cut action, for instance. He embraced that movement and learned to mix it with a straight fastball on command.

Those in Tampa appreciate his curious nature and drive to improve.

"He's really bright, open, energetic, great conversationalist," says Rays VP of Baseball Operations Chaim Bloom. "The big thing that stands out to me this year has been his approach to where he's mentally locked in in a way I don't think we'd seen before. The commitment to attacking the strike zone has been so strong and really unshakeable to this point."

Glasnow credits Tampa's culture for helping bring about that change. "A lot of it is the mentality the front office and coaches bring: Go. Go throw. Go play baseball," he says.

It's a mindset that has taken him a long way, from struggling youngster to towering menace on a Cy Young track. All Glasnow had to do was buy in, to abide by one core principle: "Don't overthink this." It's a simple notion, and it's one he thinks a lot about.

Should the Rays take a flier on Yoenis Cespedes? 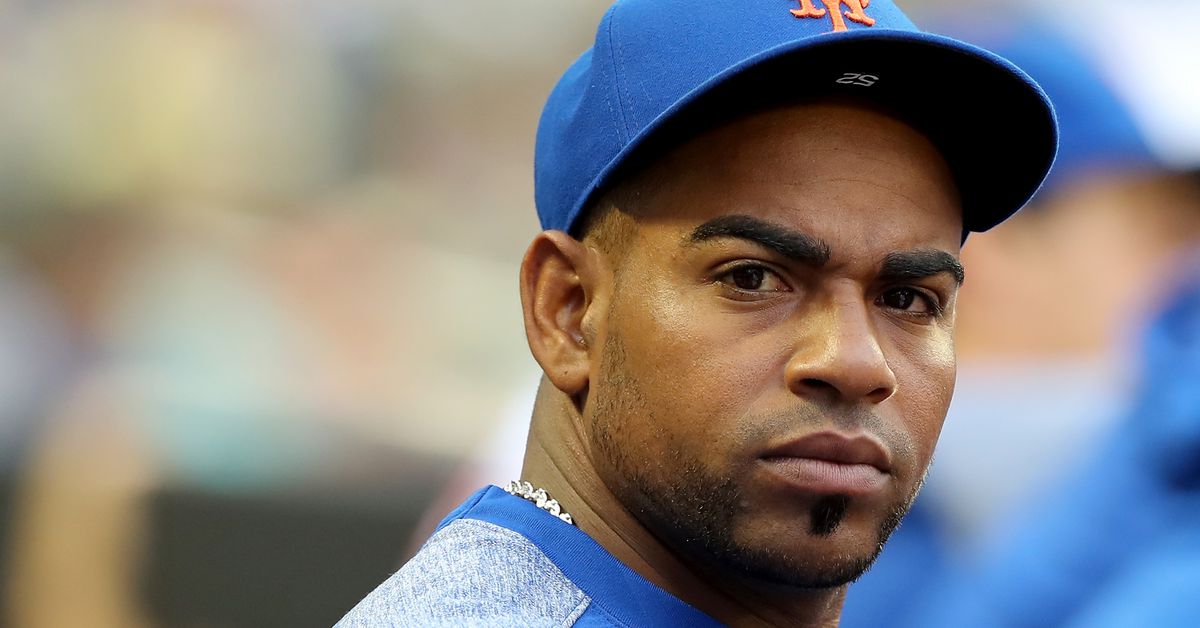 Should the Rays take a flier on Yoenis Cespedes?

Cincinnati and OF Nick Castellanos agree to 4-year, $64M deal

Who Is MLB's Best Defensive Player?

We rank the game's best heading into the season

Who Is MLB's Best Defensive Player?