The Indiana Pacers are steadfast in leading with big men in an increasingly smaller NBA.

The team drafted 6'11" center Goga Bitadze with the 18th overall pick in this year's draft to add to a frontcourt already sporting 6'11" center Myles Turner and, yes, 6'11" forward/center Domantas Sabonis.

This became even more intriguing when ESPN's Zach Lowe reported Friday that the Pacers rejected offers for Turner during the 2019 NBA draft:

"The league at large is skeptical about the staying power of the Sabonis/Turner duo, and that skepticism grew louder when the Pacers drafted another center—Goga Bitadze—last week. (Sabonis is up for what would be a big extension this summer.) Teams call about Sabonis and Turner all the time; the Pacers rejected offers for Turner at the draft, sources say. Those calls will continue."

The 19-year-old Georgia international was Indiana's only 2019 draft pick. The Pacers traded the rights to their second-rounder to the Utah Jazz for a future second-round selection.

"I think you look at our roster with Myles, with [Sabonis], and I think we have a lot of flexibility and a lot of minutes," Pacers president of basketball operations Kevin Pritchard said at Bitadze's introductory press conference. "You have 96 minutes in two positions. Everybody thinks it's all about going small. I'm not so sure that's the way." 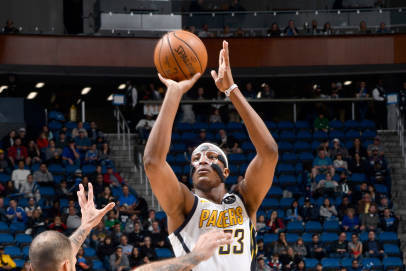 Perhaps Bitadze will excel and bump Turner out of the starting spot, but that shouldn't happen immediately. However, Bleacher Report's Jonathan Wasserman projected Bitadze to "be good for 20 minutes per game right away."

The Indianapolis Star's Gregg Doyel wrote in April that the Pacers need to trade Turner in order to properly rebuild around All-Star Victor Oladipo while also noting that Turner and Sabonis are rarely able to play together.

The Pacers need perimeter shooting, so it makes sense to bring back Bojan Bogdanovic, who shot 42.5 percent from three last season. And Lowe reported the team hopes to do so. But that alone won't be enough in an improving Eastern Conference.

Testing the trade market for Turner or Sabonis to try to net a playmaker and scorer, however, might. The Pacers might be inclined to trade Turner if Bitadze develops a better rapport with Sabonis and allows Indiana to play both big men in a way they can't with Turner and Sabonis.

The Pacers may have shut down any offers rolling in on draft night, but if the calls keep coming as Lowe has forecast, there's always the possibility that Indiana could eventually reconsider.