The Anthony Davis saga picked up steam Wednesday with reported interest from both the Boston Celtics and Los Angeles Lakers, according to ESPN's Adrian Wojnarowski. It was news that propelled the pair ahead of the New York Knicks, Los Angeles Clippers and Brooklyn Nets in the race to acquire the NBA's most immediately available top-five star.

These franchises are waging a quiet war in the race to acquire a superstar until they can officially begin talking with free agents like Kemba Walker, Kyrie Irving, Jimmy Butler and Tobias Harris at 6 p.m. on June 30. In addition to weighing the value of upending a roster for Davis, each suitor will face uncertainty if successful in landing the New Orleans Pelicans star.

If the Celtics send out Jayson Tatum, will Kyrie Irving follow Davis to Boston?

If the Nets alter their track, will they win one of Kyrie or Tobias Harris?

If the Clippers acquire Davis, can they convince Kawhi Leonard to abandon the NBA champs in Toronto? 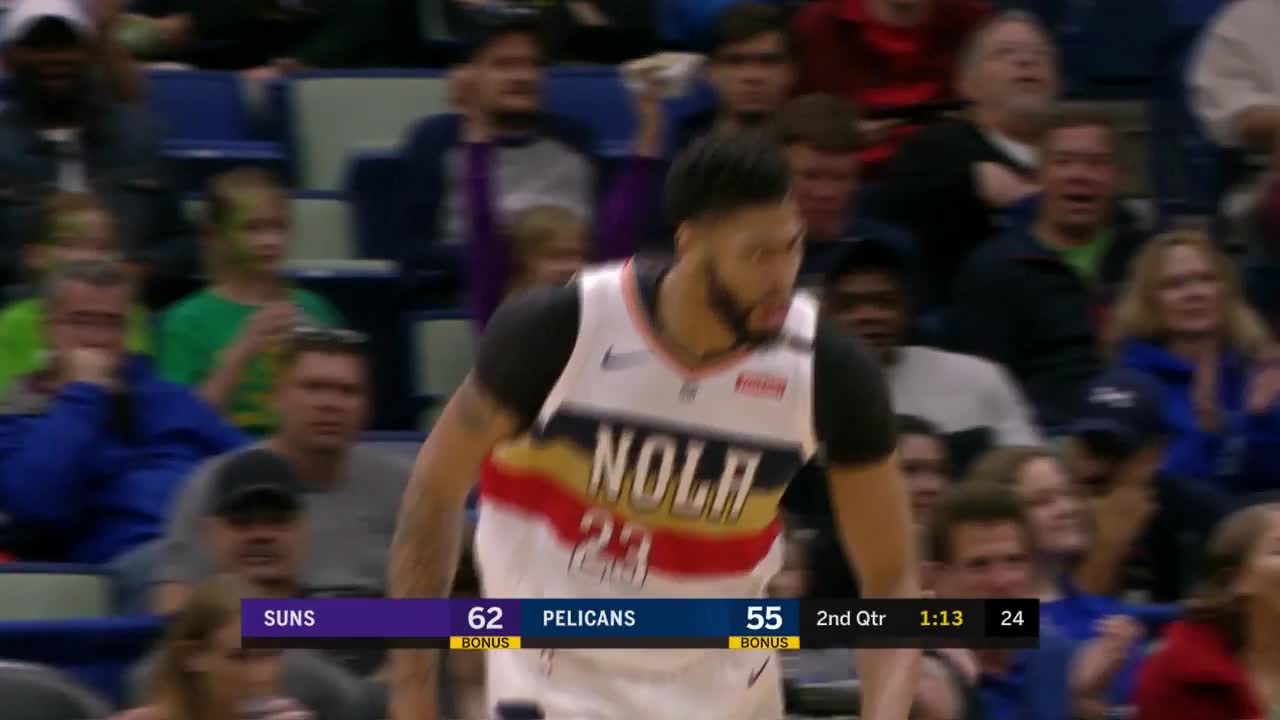 Should the Lakers win the sweepstakes, there is no evidence to suggest they'll be able to add a third star or complement Davis and LeBron James with a bedrock of talent to carry them deep into the playoffs.

"This is an organization that is in a win-now mode with LeBron James," Adrian Wojnarowski said on ESPN (h/t Sporting News). "They've got to find, and very likely via trade, a co-star for LeBron James, because right now they are not a front-runner or even really a major consideration among any of the elite free agents."

Each of these moves also carries the potential for disaster should Davis walk next summer.

But there's a franchise that can offer New Orleans its desired talent while retaining a 24-year-old All-Star and 22-year-old rising one—a team with recent playoff success, a solid head coach and a well-respected front office.

Pelicans executive vice president of basketball operations David Griffin's selling point will begin and end with get-rich-now comparisons to Toronto's successful gamble on Leonard. The Denver Nuggets sit in a similar position to that of the 2017-18 Raptors.

The eventual Eastern Conference champion Cleveland Cavaliers swept Toronto in the second round after the Raptors won 59 games and secured the East's top seed last year.

The Nuggets fell to CJ McCollum (37 points) and the third-seeded Portland Trail Blazers by just four points in Game 7 after having won 54 contests en route to the Western Conference's No. 2 seed this season.

Unlike those Raptors, the Nuggets sit at the crest of their wave. The roster's core features young talent in Nikola Jokic, Jamal Murray, Gary Harris, Malik Beasley, Monte Morris, Trey Lyles and Michael Porter Jr., each of whom was born in 1994 or later and has four years of experience or less. Will Barton (28) and Paul Millsap (34) are the oldest contributors to one of the NBA's youngest, most successful teams.

The Nuggets will continue to improve, and their existing talent should grow enough to move them past older teams of Portland's ilk. But should Denver look to accelerate its timetable and thrust itself into the championship conversation next season, Nuggets executive vice president of basketball operations Tim Connelly must trade for Davis.

Disregarding Davis' 2018 playoff success—which included four games against the same Blazers who defeated the Nuggets in seven games—that saw him chip in a ridiculous 30.1 points, 13.4 rebounds and 2.3 blocks in nine contests, the 26-year-old is the ideal complement to Jokic and permanent frontcourt partner.

Jokic's otherworldly facilitating vision and execution lends itself naturally to Davis' offensive skill set, but here's some context before we analyze their fit.

In 2017, the Pelicans hired then-Nuggets assistant coach Chris Finch to shepherd a fresh era into New Orleans with an offense predicated on the point center philosophy he instituted in Denver, making the Nuggets the NBA's fourth-best offense in 2016-17 with an outlook centered around Jokic.

Finch used this system to help give Davis his most efficient season. As DeMarcus Cousins commanded the squad from the top of the key and the post, Davis scored on a what would be a career-best 54.1 percent of his shots and connected on a wildly improved 36.7 percent from three-point range in 51 games before the All-Star break.

After the break, when Davis moved alongside Emeka Okafor, he fell back to earth, hitting on just 28.3 percent of his deep-range bombs.

Davis is an offensive wrecking ball who needs more help than many in the NBA recognize or acknowledge. He received assists on 61.8 percent of his two-point shots in 2018-19 and 100 percent of his three-point shots, converting just 34.7 percent of unassisted shots.

In 2017-18 (42 of 75 games with Cousins), inarguably Davis' most successful season, he was assisted on 70.1 percent of his two-point field goals, converting just 29.9 percent of those shots when unassisted.

Here's where the Nuggets and Jokic come in. He generates his own offense (48 percent unassisted conversions), and his 26.5 assist ratio puts him second in the NBA at his position behind fellow Nuggets frontcourt bulldog, Mason Plumlee (minimum 70 games played).

Jokic can create open looks and dictate the offense in a way in which Davis will thrive. Denver's incumbent star can also punish the NBA's big-bodied centers who Davis resists battling. The 6'10", 253-pound AD can rim-protect and use his closing speed and length on the defensive end to forgive Jokic's shortcomings there.

And in the pick-and-roll, the two would be unstoppable.

Adding Davis to the 24-year-old Jokic and 22-year-old Murray would create a threatening contender. But what would it cost the Nuggets' quickly developing roster?

Building a deal for Davis around relative unknowns won't seem popular on paper, but let me help sway you with the help of Bleacher Report colleague Adam Fromal:

Morris is the perfect facilitating backcourt complement to Jrue Holiday and expected No. 1 overall pick Zion Williamson. He's an expert at managing offenses and a stable force who will run head coach Alvin Gentry's offense with aplomb.

Beasley is the perfect three-and-D wing. At 22 years old, Beasley hit over 40 percent of his three-point shots in 81 games and scored 17.6 points on 47.4 percent shooting from the floor per 36 minutes. Beasley is a low-cost version of Wesley Matthews with size enough to man small forward (6'5", 195 pounds).

Barton is the long-armed mid-range assassin who can break down defenses and spread the floor with penetration.

Sending Plumlee to New Orleans helps shed a bit of salary, giving Denver room enough under the cap to add to its newfound group. The Nuggets can also use their room exception to round out a roster of Murray, Moore, Gary Harris, Torrey Craig, Davis, Jahlil Okafor and Jokic.

However, Morris, Barton and Beasley hardly make for All-Star-level additions. That blue chipper will come in the form of Michael Porter Jr. The Pelicans have the freedom to be patient with Porter, who averaged 36.2 points and 13.6 rebounds per game while helping his team to a 29–0 record and a Class 3A Washington state championship in 2017 as a high school senior.

"What I've seen from Michael this year in flashes is a guy with tremendous size and length, that's got deep range, that can shoot the ball, that can put the ball on the floor and has great athleticism to finish at the rim," Nuggets coach Michael Malone said, per Mike Singer of the Denver Post. "This will be a really big summer for Michael."

Should the Nuggets become disinterested in Moore and treasure space instead, they can always move on from him, as his $8.7 million expiring deal should make him a valued commodity.

Denver would take an incredible gamble by dealing for Davis but would gain an undeniable top-five talent who could help form an All-Star trio capable of carrying the team to a title. Adding the NBA's sixth-best three-point shooter at a minimum three attempts per game (Moore) and Okafor, who was quietly productive after Davis' January trade request would help round out the roster. The Pelicans would first need to pick up Okafor's team option to cement the transaction.

Statistics courtesy of NBA.com and Basketball Reference unless otherwise noted.

Predicting every team's plan for 2020