The Atlanta Hawks defeated the Chicago Bulls 121-101 at the United Center on Wednesday.

John Collins led the way for the Hawks with 35 points and eight rebounds, and Trae Young added five points, 12 assists and seven rebounds. Zach LaVine had 23 points and four rebounds in a losing effort for the Bulls, and Lauri Markkanen contributed 22 points as well.

Adding Consistent Range Is John Collins' Next Step to Stardom 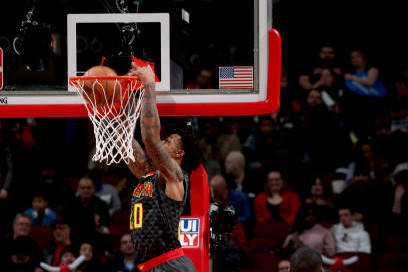 A breakout 2018-19 campaign has Collins looking like a future All-Star. But if he's truly going to shine in today's NBA, adding consistent range to his skill set will be key.

Collins has become a double-double machine in his second year in the league, averaging 18.8 points and 10.4 rebounds per game this season. While his 57.9 field-goal percentage entering Wednesday was good for ninth in the NBA, he is shooting just 33.8 percent from beyond the arc.

Three-point shooting has never been a major part of the 6'10", 235-pound forward's game prior to this season. He took just one attempt from distance in two seasons at Wake Forest, and he had just 47 attempts as a rookie a season ago.

Collins entered Wednesday's contest having gone 23-of-68 on treys through his first 30 appearances this season. That includes three separate occasions in which he hit at least a trio of threes, shooting 50 percent or better from distance in each of those performances.

He caught fire early against the Bulls, going off for 15 points in the first quarter. Per Fox Sports Southeast, that's the most the second-year forward has dropped in a single quarter to this point in his professional career. That outburst was aided by him draining a pair of three-pointers, and he added another one in the second quarter on his way to 22 first-half points.

He finished the night a perfect 4-for-4 from three-point range.

Small sample size or not, Collins' perimeter shooting has improved with each passing month this season. He is now at 57.7 percent for January (11 games) after his latest outing.

Of course, a player of Collins' size needs to focus on owning the paint above all else. But as Golden State Warriors forward Draymond Green has shown, a big man being able to step out to the perimeter and knock down a triple on occasion can provide a major boost to the offense.

The Hawks as a team are in dire need of consistent three-point shooting, ranking 27th in the league at 33.6 percent. Collins shouldn't be expected to be their savior in that regard, but if he can have more nights like Wednesday, his game will reach another level.

Chicago (11-37) will be back in action on Friday as it continues a three-game homestand against the Los Angeles Clippers. Atlanta (15-32) is off until Saturday when it will play the second leg of a seven-game road trip against the Portland Trail Blazers.