Coming off a 28-point night in his team's loss to Georgia Tech, Brandon Childress shot 3-of-9 from the field en route to 12 points for Wake Forest.

Consistent Perimeter Game Would Make Zion Unstoppable in the NBA

On a physical level, Williamson is simply head and shoulders above the competition in the NCAA. He's a 6'7", 285-pound freight train the likes of which you don't see even in high-level college basketball.

When Williamson hits the NBA, he can't lean on his physicality quite so much. The Blue Devils freshman won't be able to bully his way to the basket—at least right away—with the same kind of regularity he enjoys now.

The concerns about Williamson's shooting aren't new. Before he arrived at Duke, some wondered whether he'd diversify his game enough to truly excel in the NBA.

Entering Tuesday, Williamson was 4-of-21 on three-pointers. He was 3-of-4 from beyond the arc against Wake Forest. 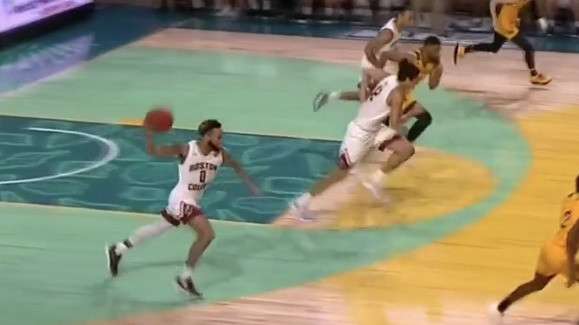 Sometimes that Zion stroke looks nice. If he gets that going, GAME OVER for everyone else

Williamson is a tremendous rebounder and hyper-efficient scorer inside. Along with his size and athleticism, those two skills are more than enough for him to be the No. 1 player in the 2019 draft class.

Were he to develop a long-range jumper, Williamson would have an MVP-type ceiling in the NBA.

Kawhi Leonard should be the template in that regard. Leonard isn't a dead-eye sharpshooter from beyond the arc, but he's good enough to keep opposing defenses honest.

Not to mention, Leonard's college career offered little indication he'd become a solid three-point option in the NBA. He connected on 25 percent of his attempts in two years at San Diego State.

Being able to space the floor is basically a necessity for frontcourt players in today's NBA, though some exceptions exist, most notably Giannis Antetokounmpo. Williamson could probably fit into that group, too, over time.

Duke's win on Tuesday offered a glimpse of how much better Williamson will be if he can grow into a more consistent shooter.

Duke stays on the road Saturday for a matchup with the No. 13 Florida State Seminoles. Wake Forest returns to the court Saturday to play the Miami Hurricanes.