"If you believe in some power that can guide Chapecoense this afternoon, now is the time to appeal to it," Rafael Henzel asked fans from his radio booth.

As Chapecoense went into Sunday's final round of the Brazilian Serie A season fighting to avoid relegation for the first time since they earned promotion in 2013, a record crowd of 19,992 headed to Arena Conda for the decisive game against Sao Paulo. It was the equivalent of one of every 10 people from Chapeco, a small agricultural city in southern Brazil, deciding to attend the match.

Many of them were wearing earpieces so they could hear Henzel, the club's favourite match commentator, call the game for Oeste Capital radio.

The atmosphere was incredible.

While Henzel spoke about faith in the moments prior to kick-off, he was aware that Chapecoense had not been as close to the drop since their promotion. The club, once dubbed the Brazilian version of Leicester City for their overachievements, were only one point above the relegation zone after struggling to find their best form throughout the season.

But the 45-year-old announcer was not the type of man to lose faith in the side's chances of securing another season in Brazil's top flight.

Henzel is a miracle himself.

He is one of the six survivors of the tragedy that devastated Chapecoense in 2016, after 71 people, including 19 players, died in a plane crash en route to the final of the Copa Sudamericana in Medellin, Colombia.

When he woke up on Sunday to prepare for the final fixture of the season, he knew it would be an emotional day that would stir up recent memories.

"It's impossible to forget that nearly two years ago the coffins of our friends were being brought into Arena Conda for fans to pay tribute to them in a ceremony," Henzel told Bleacher Report.

The Sao Paulo match—a fixture that local newspaper Diario do Iguacu had dubbed "the most important game of Chapecoense's history"—was being held on the eve of the two-year anniversary of the memorial services held at Chape's stadium back in 2016.

Back then, Henzel had not been released from a hospital in Colombia. He still had a tube down his throat and was sedated after breaking seven ribs in the crash. It would only be later that he learned about the caskets being carried on to the pitch for the wake.

On Sunday, though, he was back at work. Climbing those familiar stairs to take his place in the press box and begin broadcasting a full 90 minutes before the kick-off. However, this time, instead of 50 bodies on the pitch, he had 11 footballers wearing green and white colors, running to show the surviving spirit remains at the club.

Being relegated to the Brazilian Serie B would have been seriously problematic for Chapecoense's future.

Chape, as the club is affectionately known, have had 54 lawsuits brought against them by families of the victims. They have already reached a deal to settle eight of the compensation cases—arranging for the payments to be made in installments over a period of five to 10 years.

The legal battle is far from finished, however, and since August, fearing a possible relegation, the club has postponed reaching new agreements until they had clarity on their future.

For the Santa Catarina-based side, going down to the second division would mean watching their annual broadcasting rights revenue, the largest source of income for the club, drop from R$28 million (£5.7 million) to R$7 million (£1.43 million) and make it near impossible to honor similar settlements to those already agreed.

The Chapecoense crash made international headlines in 2016RAUL ARBOLEDA/Getty Images

The financial concern was so big over the course of the season that the footballers even discussed it inside the dressing room.

"We have talked about this situation—how important the first division survival would be for everyone," says Douglas, one of Chapecoense's captains. "The club is being rebuilt almost from the scratch. We are aware that so many people and families rely on our work to move on with their lives. From the first day, it has always been our main goal to remain in the Serie A. Fighting to the end is part of our DNA and will forever be."

Not many people expected the uncertainty to go on until the last round of games, though. Results in the previous season had set the bar higher than the team could sustain after all it went through.

Alan Ruschel, who survived the crash, has played 18 times this seasonAlexandre Loureiro/Getty Images

In 2017, a few months after the plane crash, Chapecoense surprised rivals to sit top of the table for the first time in their history. It seemed inevitable that the initial sprint would not endure, and a midseason slump saw them fall down the table, but they still managed to finish in eighth, their best-ever position, and secure a spot in the Copa Libertadores.

It was another remarkable success story for Chapecoense, a club that went from the fourth tier to the elite in just five seasons, but the cracks finally started to show this campaign.

"I've got the impression that last year the players played for the cause," explains Henzel. "Chape was recovering from a tragedy, did not have a squad and had to reconstruct the team with loan players.

"Although they were not emotionally connected with the city, it was possible to see they wanted to honor the memories of those who had died.

"I could not recognise the same this season—it looked more like a random team than one who was continuing the rebuilding work."

Former Chapecoense marketing executive Andrei Copetti says bringing in more expensive footballers also failed to pay off and instead created a distance between the club and the fans.

"Chapecoense has lost its essence."

Besides that, it has also been chaotic off the field, with three different coaches (Gilson Kleina, Guto Ferreira and Claudinei Oliveira) taking over during the season, high-ranking directors (Rui Costa and Joao Carlos Maringa) being dismissed and president Plinio David de Nes Filho embroiled in a controversy over a proposed bonus payment for Chapecoense finishing second in the Santa Catarina Championship.

Amid this confusion, the footballers still have to cope with the pressure of replacing names such as Danilo, Cleber Santana and Kempes, who lost their lives in the disaster.

Even for an experienced player like Artur Moraes, that proved a tough ask. The goalkeeper, who played for big clubs like AS Roma, Benfica and Cruzeiro during his career, was part of Chape's rebuilt 2017 squad.

"Being compared to those heroes was something very hard to handle," Moraes admits.

"Perhaps not handle, I mean, but to deal with—it's inhuman because you will never be able to take their places—and most importantly, you don't even want that. They're irreplaceable and will forever be remembered. It's impossible to fill the vacuum in the fans' hearts.

"Nevertheless, it was a very heavy comparison for me and took me some time to understand the supporters. But after three months, I realised I had no other choice. Our main legacy was the respect we showed to the families and people who went through the tragedy while encouraging them to continue."

Despite the rebuild still being a work in progress, rows and lawsuits with relatives of the plane crash victims have seen Chapecoense lose their spot as the second team in the hearts of many fans in Brazil.

However, they can still rely on their loyal fans to make sure the surviving spirit keeps pushing them ahead.

"The atmosphere of the weekend's game reminded me a lot of the one we had on November 23, 2016, when the goalkeeper Danilo made a brilliant save in the end of the semi-final against San Lorenzo to confirm the 0-0 draw and our place in the final of the Copa Sudamericana," Henzel recalls.

The noise in the ground went a long way toward explaining how the small-town club beat Sao Paulo 1-0 to secure a spot in the first division for the sixth season in a row.

As the referee blew the final whistle, wild celebrations took over the Arena Conda.

Henzel could not contain himself in the press box and cried while repeating several times that Chapecoense "could never be relegated to the second tier."

At the same time, two other survivors of the crash—Alan Ruschel, who played 18 times this season after an eight-month recovery process, and Jakson Follmann, a former goalkeeper who has a prosthetic leg and now works as an ambassador of the club—went around the pitch on a golf buggy, carrying Chapecoense's flag.

The trio demonstrates that, despite the confusion off the field, the fairytale story of the Brazilian club is still open for new chapters.

Only one in 600 players wears it. B/R looks at how Brazilian football is tackling homophobia problem 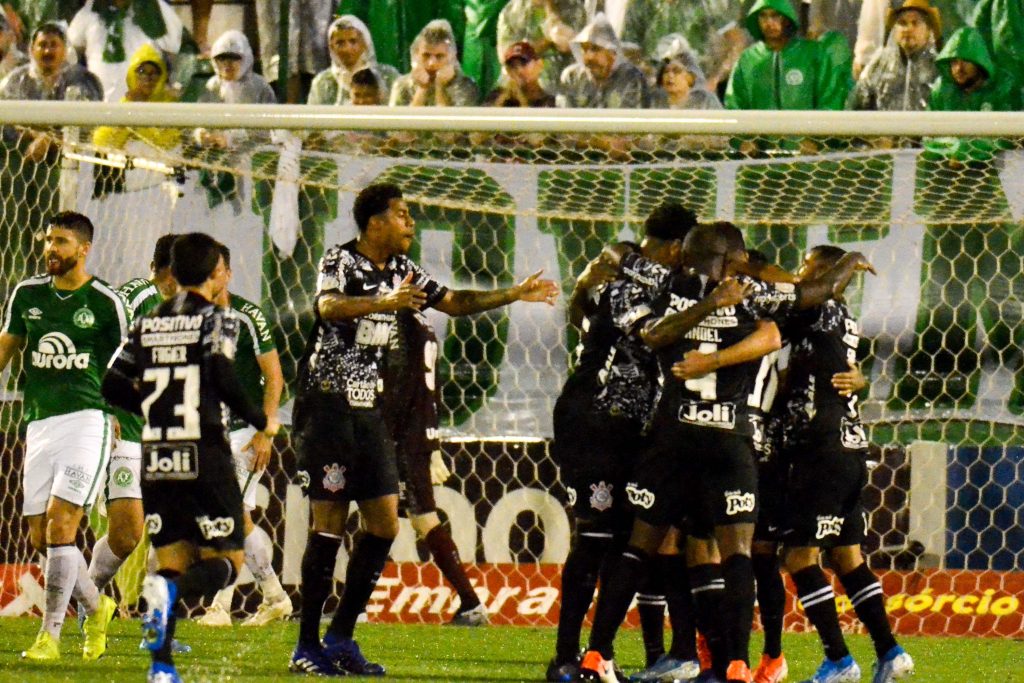