BROOKLYN — Markelle Fultz spent Sunday night's Sixers-Nets game the way any inactive player would: sitting on the bench among his teammates, dapping them up following timeouts as they walked off the floor, sharing words of encouragement and advice with the player—T.J. McConnell—who had replaced him in the rotation.

When Jimmy Butler drilled a step-back three-pointer from the right wing, capping off a 20-point comeback and lifting the Sixers to a 127-125 win, there was Fultz, donning a red blazer and white button-down shirt, smiling and jumping around among a sea of Sixers players and staff.

This is how Fultz has spent his past week: traveling with the team, hanging out in the locker room, watching practices from the sidelines, sitting on the bench during games.

"Things have been regular, the same with him," Sixers forward Wilson Chandler told Bleacher Report on Sunday night. "We've been interacting the same way."

That Fultz has tried to treat all this like a normal week underscores just how strange things are for Fultz and the Sixers. This is not just another player recovering from an injury. 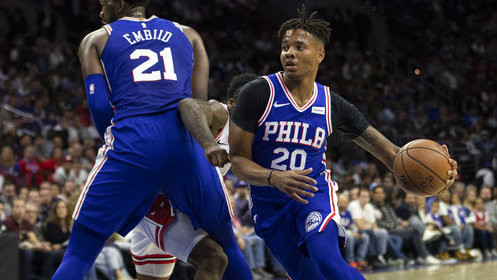 Less than one week ago, Fultz's agent Raymond Brothers notified the Sixers that Fultz would be heading off in a few days to have his right shoulder examined by a "specialist." That came the night after head coach Brett Brown benched Fultz in the second half against the Phoenix Suns.

This is the same shoulder that Fultz and his camp have adamantly asserted is the cause for his broken jump shot, though we've learned in the days since that Fultz will be having his right wrist examined as well.

In the meantime, Brothers told the Sixers Fultz would cease participating in practices and games. It's been bizarre to watch—the 2017 No. 1 overall pick demoted to cheerleader, not because the team that invested in him believes he's hurt. But because he and his camp are convinced that an injury yet to be discovered does, in fact, exist.

Perhaps this specialist does indeed unearth an ailment that could explain the short-circuiting of Fultz's jumper. In the short term, though, that may not matter.

Even before this latest setback, executives across the league had gotten the impression that the Sixers were ready to move on from Fultz, according to league sources. The Butler trade had crystallized their priorities. The Sixers are chasing titles now, and Fultz's early-season performance had left no indication he could help them reach those heights anytime soon.

Sixers general manager Elton Brand wasn't actively shopping Fultz, according to a team source, but one GM said it "seemed like they were open to trading him." Another source said they were itching to do so before this year's Feb. 7 trade deadline.

That was before Fultz's camp elected to blow up whatever goodwill had been built between the two sides by blindsiding the Sixers.

Last week, Brand said the following when asked why Fultz would have to wait six days for his consultation: "I asked [Raymond Brothers] why Monday. He said that's the best time they can get an appointment. I thought they might move it up for him, but I guess not. So Monday is the appointment."

It’s fair to say the clock seems to be winding down on Fultz's time in Philadelphia. The question is: What options do the Sixers have?

Trading him would seem to be the obvious answer, but doing so is easier said than done. Fultz is averaging an unimpressive 8.2 points and 3.1 assists in 22.5 minutes per game. He's connected on just 4-of-14 from three. The Sixers offense cratered whenever he stepped onto the court (8.5 points per 100 possessions worse, according to NBA.com), due to his inability to space the floor.

Then there's the mysterious case of his jump shot, which most observers around the NBA, despite Fultz's insistence otherwise, attribute to a mental block as opposed to a shoulder injury. Fultz seems unwilling to acknowledge this could be the root of his issues, which has some teams worried about the likelihood of him fixing this issue in the future.

And yet Fultz remains a No. 1 pick who has flashed the skills that propelled him up draft boards.

"He's shown that when he's willing to, he can get that 15-foot jumper any time, and some of his moves in the paint or on the break are the kinds of things most guys just can't do," was how one Eastern Conference scout described Fultz's game earlier this season. It is why an opposing general manager said he believes "there could be a limited market for [Fultz]."

The Phoenix Suns could be an option. Veteran wing Trevor Ariza, with his three-and-D skill set, would be a perfect fit for the Sixers, who have been overplaying their stars. Head coach Brett Brown has been rolling with an eight-man rotation after trading for Butler.

Ariza can't be traded until Dec. 15, but with him on a one-year deal and the Suns already out of playoff contention, they could make a move. Being in a smaller NBA market could benefit Fultz as well.

Maybe Brand can convince the Magic, who are giving their point guard minutes to D.J. Augustin and Jerian Grant, to take a flier on Fultz. Or maybe the Cavaliers, another small-market team in desperate need of a talent injection, would roll the dice.

It's all going to come down to the Sixers' asking price.

"I'd be surprised if they get any type of first-round pick," another team executive said. "It's just hard for any team who is trying to have space this summer to take a flier on a guy like that who will eat into their space like he will."

That's the thing with this situation: Wild as it sounds, time is running out.

The Sixers have to decide by October whether to pick up that $12.3 million option. If they elect not to, Fultz becomes a free agent. The Sixers are going to have to pay Butler and fill out the roster with players capable of helping them chase a title, so it's hard to see them going this route.

That destroys his value on the trade market next year, which means the Sixers have up until this season's trade deadline to make a move.

That is not the ideal fate for a player selected first overall in last year's draft. But focusing on what Fultz was is beside the point. He's a sunk cost, no longer a player who can help the Sixers. Given the current reality, turning him into anything that can help them win now would be a win.