To those who have dedicated their lives to studying the minds and mental well-being of elite athletes, this feels like a moment. At least they hope it is. They hope Penn State kicker Joey Julius will no longer serve as an outlier. That his openness and honesty about struggling with an eating disorder, an illness not typically associated with football players, will be a beacon for others.

For people such as Mark Aoyagi, director of sport and performance psychology at the University of Denver and a member of the Association for Applied Sport Psychology, the hope is Julius will help change a culture that has discouraged weakness of this kind, simply by embracing the idea that it's OK to admit that help is necessary.

"This takes a tremendous amount of courage, to do something like this, especially in the football community," Aoyagi told Bleacher Report. "Toughness is valued. The courage and vulnerability to do what he is doing is really remarkable."

For the second time in a year, Julius opened up about his struggles with binge eating. After coming forward last fall, appearing on programs such as Good Morning America and College GameDay, Julius announced in early May that he was again struggling and seeking treatment at the McCallum Place treatment facility in St. Louis.

While revealing the reason for his spring football absence on Facebook, he didn't beg for support or understanding. Instead, he devoted the majority of his message to emphasizing the importance of seeking help when in need.

"Recovery is a wonderful and beautiful thing that I am working on returning too (sic)," Julius wrote. "For anyone out there that has similar struggles I hope you too can seek help in some way. Your feelings should be completely validated and I wish you all the best in your search for recovery."

Julius first became nationally recognized in large part because of a handful of plays. His tackle against Kent State back in September of last year transformed him into an overnight celebrity of sorts. Later that month, his hit on Michigan's Jourdan Lewis prompted yet another round of social media attention.

Such amazement came in large part because Julius does not look like a normal kicker. He is listed at 5'10" and 258 pounds on his Penn State profile. The college football world fell in love with the player (and his size). Weeks later, the Hummelstown, Pennsylvania, native revealed he had been suffering from binge eating.

"It's characterized by eating large quantities of food, oftentimes quickly, often to the point of discomfort," said Riley Nickols, a sports psychologist, director of the Victory Program at McCallum Place in St. Louis and a member of the Association for Applied Sport Psychology. "We see a lot of athletes with eating disorders, but we've never come across an athlete who has just an eating disorder. Often there is a mood component."

To those who knew Julius leading up to the moment he came forward, the news came as a shock. Even his best friend on the football team, former wide receiver Matt Zanellato, did not get a sense that anything was wrong.

The genuine, outgoing teammate he met through THON—Penn State's student-run charity for pediatric cancer—gave off the impression of being completely fine.

"Of all the guys he would have confided in on our team, it probably would've been me. Even I had no idea," Zanellato said. "I thought about the times we went out to dinner and ate a bunch of food together. I took him out for his 21st birthday and thought back to eating late-night food. I felt horrible. I just wish I could have helped."

Tyler Yazujian, former Penn State long snapper and currently of the Detroit Lions, spent many hours with Julius on the practice field, away from the rest of the team the majority of the time. Away from the field, they played golf on Penn State's university course.

Julius consistently outdrove Yazujian. It was ritual. Regardless of the outcome off the tee, though, the two enjoyed their time together no matter where they were.

When Yazujian first heard the news about his friend, he had a different response in large part because he's had a family member deal with an eating disorder. While Julius' situation was unique, it hit closer to home.

"I address it as an issue, and I recognize it as a problem," Yazujian said. "It is something that they have to deal with. The specialists were there for him. The whole team was there, especially once we found out it was a serious issue. I'm not there now, but I can speak for the team. They're with him no matter what."

Since coming forward, Julius has received remarkable support from his teammates, family and friends. His Facebook wall is littered with well wishes, both from those who know how difficult an eating disorder can be and from those with no familiarity. Perfect strangers are coming together to celebrate the journey and now, once again, the recovery.

Suddenly, there is a spotlight on the issue. Not just Julius or the idea that football players could be dealing with eating disorders. But anxiety and depression and struggles that aren't often discussed whatsoever in football—a sport that is seemingly too big and fast and tough to cope with such things.

This is not simply related to large volumes of food being consumed, but rather the driving force behind the behavior. It is here that Julius' struggles branch out and touch so many others.

Ron A. Thompson, sports psychologist and co-founder of the Victory Program, has worked in Indiana's athletic department for 31 years. He's consulted with the NCAA and the IOC on mental health during this time as well. While his focus has been eating disorders, he also has written about the mental well-being of NCAA athletes. He's worked mainly with athletes in "lean" sports: swimming, diving, running, gymnastics and figure skating. But he's quick to note that just because he has not seen a significant number of football players, it doesn't mean there isn't an issue.

"We have over 100 football players at Indiana University, but do I see them very often? No. And that speaks to the problem," Thompson said. "Does it mean that they are so healthy that they don't have these issues? No, that's not what it means. It means they are not coming in."

Thompson, like the other two psychologists contacted for the piece, noted that mental health awareness in the NCAA and across the football landscape has greatly improved. In 2013, the NCAA assembled a mental health task force, led by chief medical officer Brian Hainline.

"He went around and asked athletes what the major medical problems that athletes dealt with [were]," Thompson said. "He was expecting to hear concussions. What he kept hearing over and over was mental health. People expect athletes to be stronger than others. They are very much like everybody else. In fact, I think they're more at risk. They have all the same risk factors, then some that are unique."

The NCAA is attempting to do its part. "We hope to make this an issue that the entire country awakens to," Hainline said during a speaking engagement at Drexel in 2016, per the school's newspaper. And while the NCAA's aggressive stance is notable, the impact has yet to truly be seen.

"I think sometimes people think that those with mental health or an eating disorder are weak. A weak person wouldn't be able to do what [Julius has] done. These are very strong people." — Ron A. Thompson, sports psychologist and co-founder of the Victory Program.

Ohio State head coach Urban Meyer—one of the faces of college football—has been vocal about his struggles and the importance of mental health. "I'm not the lone wolf," Meyer told Bleacher Report about his battles last year.

Others within the profession are embracing this side of the game as well. While business booms for college football, some of these resources are being injected back into things beyond facilities and locker rooms and stadium upgrades.

Programs are spending more on the mental aspect of the game: not just the idea of in-game visualization but total player health. There are more outlets and places that players can turn to if they feel they need help.

"If you're really about the wellness of your players, this is huge," said one Division I head coach. "Whether it's eating or depression or problems at home, these are things they're not likely to tell me. But maybe they can tell someone. We're better than we've ever been. We just have to keep going."

And yet, with so much movement seemingly taking place and barriers being broken down one by one, it has yet to truly resonate it seems with the thousands of football players who make up collegiate rosters.

Concussions, of course, have become a regular part of the conversation. Player safety and injury prevention are widely and regularly discussed. But mental health remains a bit taboo.

"Football players are used to dealing with discomfort and pain," Aoyagi added. "But that's physical. It's not really culturally accepted in football to talk about mental and emotional pain.

"A lot of athletes will privately say how happy they are that someone else is talking about this. Because publicly and even in the locker room, they never know how it's going to be perceived."

Which brings us to Julius, the viral kicker for one of the nation's most recognized programs. Not only has Julius come forward with his issues—putting them out there for the world to see—but he also has campaigned and encouraged others to follow his path as he's struggled.

He has become a voice for the silent contingent of athletes who are dealing with these issues out of sight. He has taken the burden off others within the sport, particularly those concerned by what the reaction of coming forward might entail.

"I think sometimes people think that those with mental health or an eating disorder are weak," Thompson said. "A weak person wouldn't be able to do what he's done. These are very strong people."

This is, of course, bigger than a theoretical discussion of eating disorders in football—a sport that typically embraces and celebrates size. Julius' weight and body type—a part of his celebrity status early on—have little to do with what happens next or the impact his story should have.

The real impact is for those who are watching. Talking. Listening. Reading. And, most significant of all, contemplating getting help.

Perhaps it's a rival at a Big Ten school. Or a high school football player. The hope is that this kind of struggle and honesty and openness can lead to more discussion. More help. More conversations.

Regardless, those close to Julius are proud of what their friend stands for, no matter where it goes from here, as they help him through his own struggles.

"For him to come forward—I couldn't respect him any more than I do," Zanellato said. "It's groundbreaking. I think he's giving a community a role model. I can only imagine how many people around the country his story has touched." 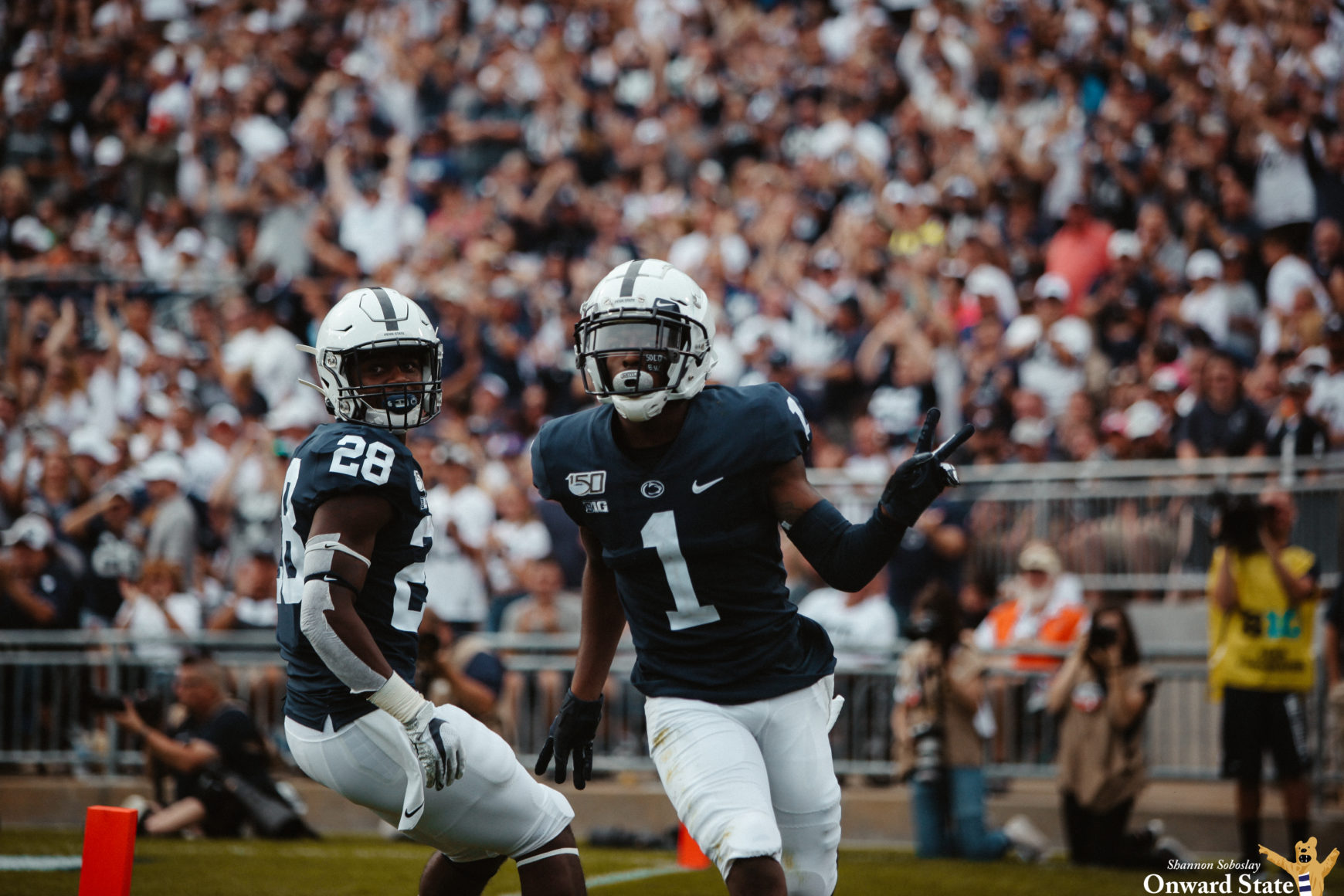