On a cold night at Selhurst Park last month, with Manchester United struggling to overcome Crystal Palace, the club's travelling supporters were more concerned with exalting one of their old heroes.

During the second half, a rousing rendition of "Yip, Jaap Stam is a big Dutchman" could be heard bellowing out from the Arthur Wait Stand and across the ground.

It has been 16 years since Jaap Stam last wore a Manchester United shirt, but his all-too-brief three years at Old Trafford are still remembered with pride by supporters, a time when they could boast of watching the best defender in the world every week.

This Saturday lunchtime, United supporters will get to salute him again as he returns to Old Trafford for the first time as a manager when his Reading side meet United in the third round of the FA Cup.

Since he left English football in the summer of 2001, Stam's legend has only been further burnished, and it remains my contention that he is both the greatest defender to play for United and to grace the Premier League.

Stam finished each of his three seasons with United as a Premier League champion, as well as completing the treble by adding the UEFA Champions League and the FA Cup in his first season in 1999.

The greatest campaign in United's history was this 1998-99 season, and it was built upon having Stam guarding their defence, which allowed United's attacking talent, including David Beckham, Ryan Giggs, Dwight Yorke and Paul Scholes, to flourish.

Peter Schmeichel only played behind Stam for that one season, but the Dane did not hesitate when I once asked him who was the best defender he had played with during his career.

"It has to be Stam, he was a tower of strength; he was so quick and strong," the former United goalkeeper said. "In the treble-winning season, he proved himself as one of the best-ever defenders. He was awesome."

During this time, Stam won UEFA's Defender of the Year award in both 1999 and 2000, and when Premier League managers were polled on who they would most like to purchase given a free choice and an unlimited budget, they chose Stam over the more obvious charms of Thierry Henry, Roy Keane and Alan Shearer.

As a player, Stam had no discernible weakness. He had a towering 6'3" frame and a brutish strength that allowed him to overpower and bully any opposition striker who dared venture near him.

And he was quick, really quick. He possessed the sort of pace rarely bestowed on a mere defender, and I cannot recall seeing him beaten in a race for the ball.

"Once Jaap's pace took him into the channel ahead of an attacking player they had no chance," his former team-mate, Giggs, wrote admiringly in Giggs: The Autobiography. "He was so strong it was a mismatch. He would not be beaten."

This was so unfathomable that it was naturally assumed it couldn't be for football reasons, and the real reason Stam was being hastily run out of town was his recently published book, Head to Head, and the unflattering headlines it had produced, including the revelation Ferguson had encouraged his players to dive.

However, the iconic United boss never used the book as an excuse for banishing him to Rome and instead believed that a recent Achilles injury had robbed Stam of some of his pace and mobility. An embarrassed Ferguson would have to watch aghast as the Dutchman continued to play at the highest level for the next six years.

After two years with Lazio, Stam was brought to AC Milan by Carlo Ancelotti to play alongside fellow defensive royalty Cafu, Paolo Maldini and Alessandro Nesta before finishing his career with Ajax.

It was an appalling error of judgement on the former United manager's part; one which would become so glaring that in time Ferguson had no choice but to admit it.

"We got the offer from Lazio, £16.5 million for a centre-back who was 29," Ferguson said, per the Daily Mirror. "It was an offer I couldn't refuse. But in playing terms it was a mistake... At the time he had just come back from an Achilles injury and we thought he had just lost a little bit."

Stam never allowed himself to be consumed with bitterness and learned to enjoy his unexpected sojourn in Italy.

"I don't hold grudges, Manchester United know they made a mistake in selling me," Stam told me in 2004. "I haven't done too badly since I left, have I?"

Stam had also told me he had no interest in becoming a manager. "I will avoid a career in coaching," he said. "I don't want to spend my time worrying about how to get the best out of a team or which left-back to sign. The coach always gets the blame. Why bring that on myself? I will stick to something less stressful."

When I met up with Stam at Reading's training ground at the start of October, I reminded him of this. "OK, I admit I was completely wrong," he laughed.

Stam managed to stay away from football for only two months, turning down an invitation to go into the Dutch Big Brother house, before embarking on a nine-year apprenticeship to become a manager.

He was asked by his first professional club, PEC Zwolle, to help out on a casual basis before he became their assistant manager; in 2013, the club won promotion to the Eredivisie.

The former Netherlands international, who won 67 caps, would then join Ajax and perform the same role as Frank de Boer's assistant for a season as they won the Eredivisie title in 2014 before spending two further years in charge of the clubs under-21 side, Jong Ajax.

"Nine years is a long time to wait, and I learned a lot," Stam said. "If you go straight into coaching, it doesn't mean you are a good coach. You need the time to educate yourself, and I found out how to put my thoughts in to words and to stand in front of a group of players, hold their attention and communicate my ideas."

By the summer of 2016, Stam had become one of the most sought-after coaches in European football and after seeking advice from both Ronald Koeman and Guus Hiddink, he chose to start his managerial career at Reading.

"The club just felt right for me," he said. "I liked hearing about how they wanted to play, their ambitions and what they wanted. Our aims were very close, and they were very happy with me."

They certainly will be now. Stam, 44, has made a highly promising start this season, reviving Reading with a more attacking style of football, which has already helped lift them from their 17th-placed finish last season and into the play-off positions.

"I want attractive football, it is how I was brought up, it is the Dutch way," Stam said. "My style is to have a lot of possession and create chances. Some might call it total football, but my intention is to try to dominate games.

"I am not the oldest manager, so I like to think I am close to the players, I still know what they need and want, and how they feel. I have had managers who shout and scream, but players can read you, so you need to be clever. I ask them a lot of questions; I want to know what they think because they need to think for themselves."

Stam played for some of the game's greatest managers, including Ferguson, Hiddink, Louis van Gaal and Ancelotti, and he has been influenced by all of them.

"From Sir Alex, I have hopefully learned how to build a team," he told me. "It is hard to repeat, but I watched how he put together a winning squad; the players he brought in for how he wanted to play, but also for the characters he needed for the mental side.

"And Ancelotti was similar to Hiddink, a great man-manager, very good with the players; [he] gave them a feeling that they are important to the team, even with the players not in the team.

"But overall the best advice I have had is don't try to reinvent football for yourself because everything is already out there."

Could he return to Old Trafford as manager of Manchester United in the future?

"I am not the type to say I want that one day, because first I want to do well at Reading," he said. "But I am ambitious, I want to get as high as I can, and I do want to get to the top level."

First, though, he must find a way for Reading to overcome his former team on his return to Old Trafford on Saturday. 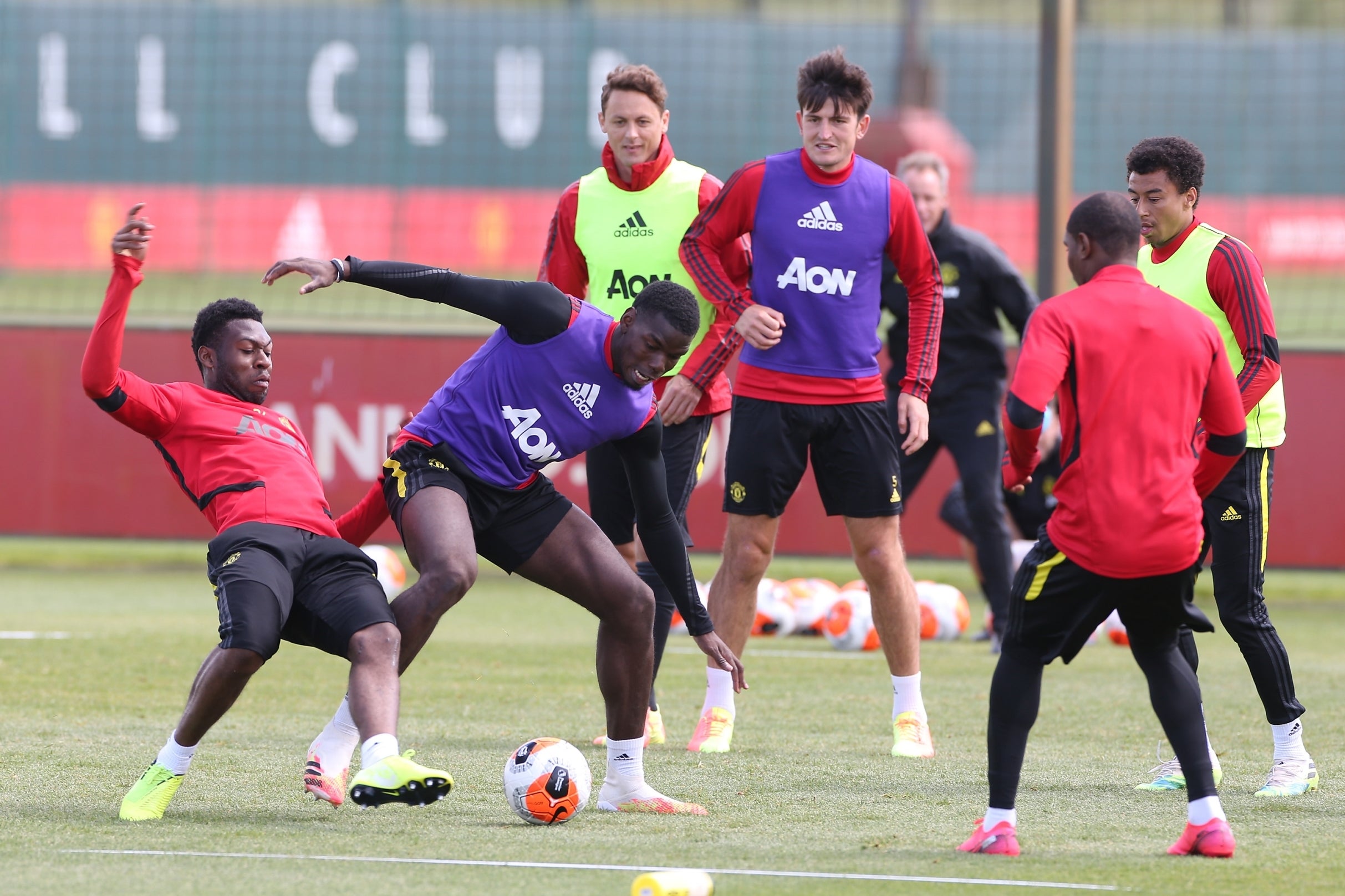 Man Utd Believe Bruno Could Spark Pogba Back into Form

Man Utd Believe Bruno Could Spark Pogba Back into Form