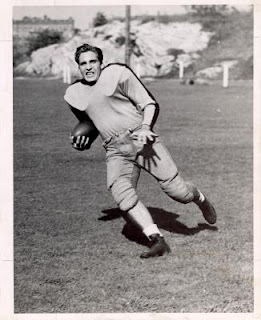 
As I continue my look at memorable defensive backs in Columbia history, many of you may be surprised to see Lou Kusserow '49 on this part of the list rather than among the running backs.

Kusserow may actually be the best running back in Lions history, but I want to focus on his amazing career as a pass defender this time. He was a key part of the Columbia defense in his time and he did it in the era when the players played offense and defense.

Kusserow was one of those rare players in the old days who was able to play varsity football all four years because of the war exception that was kept in effect until 1949 or so. (QB Gene Rossides was another one of those players). And because he stood out so much on both sides of the ball an argument could be made that he was the greatest football player in Columbia history.

Here are some of the more interesting records and tidbits from Kusserow's Lion career as a defensive back:

1) He still holds the Columbia record for most interceptions in one game with four. He did it in a 27-13 win over Yale in 1945. Kusserow is tied with three other Ivy players for that single game record, but he was the last to accomplish the four-pick feat, (Paul Busse of Princeton did it also against Yale in November of 1940).


2) He's tied with Phillip Murray '03 for the all-time Lion career interception record at 16. That ties him for fourth on the Ivy career list. (Princeton's Dean Cain, of acting fame, holds the record at 22).


3) He made what was perhaps the most significant interception in Columbia history, the pick off that iced the historic 21-20 win over Army in 1947. (He also rushed for a TD in that game).


5) It was as a defensive back that Kusserow became a star in the Canadian Football League. He is still remembered fondly by Hamilton Tiger Cat fans who talk about the plays he made to help preserve a Grey Cup title.


6) He was also a great kick returner, and still holds the record for the longest kickoff return in Columbia history, a 100-yarder against Dartmouth in a 26-21 loss in Hanover.

In fact, a possibly apocryphal, but fun story about Kusserow involves his kick returning prowess. It goes something like this:

Before his first game, Lou Little warned Kusserow not to try to run back kick-offs if they went over the goal line, but to down the ball in the end zone.

The opening kick-off went to Kusserow over the goal line. Lou fumbled, recovered, fumbled again, grabbed the ball and started to run.

On the bench, Little sprang to his feet, his face red with anger. "Get that fool kid out of there!" he yelled to his assistant. Kusserow had reached his own ten-yard line and seemed trapped by a host of tacklers. Somehow, he squirmed away and wasn't caught until he had reached the enemy eight-yard line.

Little stuck out a hand to stop his assistant from carrying out the instruction he had just given.

"Let the kid stay in," Lou Little growled. "After all, he's only seventeen years old. You wouldn't want to shake his self-confidence, would you?"