Those who fail to learn from the past, are doomed to repeat it. It is an age old saying that Dallas Cowboys owner Jerry Jones, has either never heard or simply chooses to ignore. What has the eccentric owner gotten himself into this time? The same as always, looking at and signing troubled players.

In what has to go down as a massively contradictory day, Jones made two interesting statements to the media on Monday.

First he told ESPN the Dallas Cowboys were not interested in troubled wide out Matt Jones. The former Arkansas Razorback was shunned by fellow alumnus Jones due to his lack of performance on the field, and his off the field actions. As a Cowboys' fan, I read this to be a good sign. Jerry Jones had learned to avoid looking at the shiny object and he was back to focusing on winning games. Then the other shoe dropped.

Jerry Jones had another conversation with a group of reporters and informed them the Cowboys were looking at troubled defensive back Adam "Pacman" Jones. 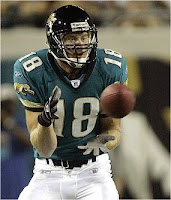 ld you beat me up if I brought Adam back?" when talking to a reporter on Monday afternoon. Obviously, Jones has something up his sleeve.

The sad part about all this is, Cowboys' fans can only sit back and cringe as they watch their team be dismantled. Oddly enough, I am not beginning to understand what life as a Raiders' fan is like.