It was nice to have a day "off" since it has been such a busy week. Here are a few things that I wanted to share before we get into "Meet Beat the Mets" mode (notebook style).

-Scott Olsen will be the first National to make an appearance at ESPN Zone this season on Monday, May 18 at noon. Sounds like it will be like last year and Charlie Slowes will moderate the Q&A session and Olsen will sign autographs for fans.

-Congratulations to Frank Robinson! Frank was appointed as Special Assistant to the Commissioner, Baseball Commissioner Allan H. (Bud) Selig. Nice to see him stay involved in the game he loves.

-Lastings Milledge was finally removed from the home page on team's website. Not sure why they removed Flores, but now there are just two: Adam Dunn and Ryan Zimmerman. This seems to be often overlooked. Last year, Paul LoDuca was gone for almost a month and was about to return to Nats Park as a Marlin, but our home page still had him pictured as a National with Dmitri Young and Chad Cordero. After multiple requests it was changed to Zim, Flores and Milledge. Those little details just get under my skin.

-What happened to Nick Johnson's beard? I thought maybe he was growing his hockey playoff beard, however, at the Tuesday game he was clean shaven. Do you like NJ furry or smooth? 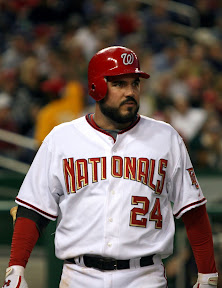 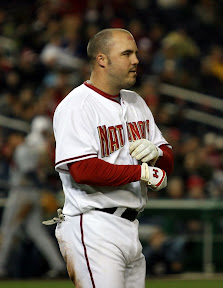 -Speaking of playoff beards, Dave is still working on his and hopefully (can't believe I just said that) won't have to shave it quite yet if the Caps can pull out a win on Friday night. Help him Rock the Red Beard and donate to Caps Care for growing a playoff beard.

-Slapshot and hockey sticks were part of the Presidents' Race on Tuesday night. Was this the Nats way of making up for the Monday night rain delay issues? Very interesting considering Mark Lerner owns a piece of the Caps. Anyone watch the Caps game at Nats Park on Wednesday night at Red Loft? Just curious.

-Just in case you have not heard, we have our first scheduled day-night weekend doubleheader at Nationals Park on Saturday, May 16! The rain-out game from Wednesday, April 15 against the Phillies has been rescheduled for a 1:05 p.m. game time and the regular scheduled game is at 7:05 p.m. Jackie Robinson Day will now be celebrated on May 16 and both the Nats and Phils will wear the No. 42 jerseys. See website for ticket information.

2021 Contenders Who Could Dethrone Dodgers or Rays

2021 Contenders Who Could Dethrone Dodgers or Rays