Russell Westbrook could sleepwalk through a game and still remain one of this league's most talented point guards, but it's not his talent that sets him apart.

The Miami Heat found out as much on Tuesday night.

Of all the adjustments Miami head coach Erik Spoelstra should make in anticipation of Game 2, the first item on his agenda will be simple enough: Don't make Russell Westbrook angry.

With the Oklahoma City Thunder beginning to erase their deficit late in the second quarter, Westbrook and Miami's Shane Battier were assessed double-technicals with 31.4 seconds remaining in the first half. In part, Westbrook was clearly interested in inciting the crowd after his layup cut Miami's lead to seven points.

He also appeared frustrated by a couple of non-calls that preceded the play.

Whatever the provocation, the results were far more clear.

After a first half in which OKC's dynamic backcourt scorer tallied just nine points while shooting 3-10 from the field, the re-energized Westbrook looked like a different player in the second half.

In the final 24 minutes, Westbrook made seven of his 14 field goals and played a far more aggressive game on both ends of the floor. When it was all said and done, he supplemented his 27 points with 11 assists and eight rebounds.

The production wasn't the only difference between Westbrook's two halves.

Once frustrated by the early flow of the game, there was a change in his demeanor as well—a fired-up version of the All-Star floor general—that translated into more efficient scoring and an insistence upon taking the ball to the rim.

Thanks to Miami's attempts to ruffle some feathers with their "physical defense," Westbrook was already one step ahead.

James says he won’t use one of the league’s approved messages on the back of his jersey, but he commends those doing so 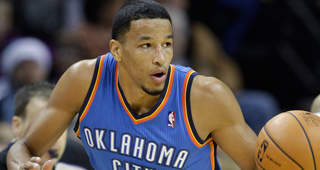