Before the much-anticipated return of The Undertaker this past Monday on RAW, there was a serious void in the wrestling world that only The Deadman himself could fill.

He did just that when he appeared at the end of RAW and challenged Triple H for their third encounter at the biggest pro wrestling extravaganza of the year, WrestleMania XXVIII.

For the past 22 years, since his début at the 1990 Survivor Series, fans erupt in an overpowering roar every time they hear that first bell toll that opens his entrance music.

That eruption never wains, and never do the fans lose interest and say “oh it's just The Undertaker, who cares?”  The Undertaker’s character has been a constant fan favorite for more than two decades, which defies the theory that the average gimmick in pro wrestling does not last very long at all.

Throughout the rich history of the WWE, there have been some gimmicks and characters that have come and gone, and were to say the least, forgettable: Saba Simba, Duke “The Dumpster” Drose, Skinner, Max Moon, the list goes on for miles.

But The Undertaker’s character has outlived some of the most memorable characters in WWE history, like Hulk Hogan, Jake “The Snake” Roberts and others.

The gimmick of The Undertaker by today's standards in the WWE would be a completely ridiculous gimmick if he debuted in the WWE in 2012, as opposed to 1990.  Think about the gimmick itself for a minute.

His character was billed as an actual undertaker (circa 1850's) from the old “spaghetti westerns,” dressed in black clothing, a wide tie and a black undertaker's hat.  His manager was Paul Bearer, a man who carried an urn that supposedly held the key to The Undertaker's power inside. 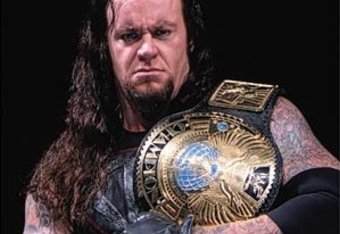 If anyone other than Mark Calloway and Percy Pringle tried to carry this gimmick, it would have at best, lasted a few weeks.

Because the character of The Undertaker was first booked as the ultimate unstoppable heel, who was impervious to pain of any kind, the fans immediately loved him whether he was a babyface or a heel character.

Also remember that early in his career The Undertaker rarely spoke, Paul Bearer did all of the speaking for him.  In today's WWE there wouldn't be too many characters that would get over with the fans if they rarely spoke.  But when he did speak, it was short, to the point and it sent a message.

That message was that whoever stood in The Undertaker's way, they were indeed going to “rest in peace.”  Hardcore fans of The Undertaker popped every time he spoke, because it was infrequent.

Over the last 22 years The Undertaker's gimmick has changed, but the changes to The Deadman persona were slight.  At the beginning of the new millennium, Taker changed from The Deadman persona to the fan favourite persona of the “American Bad Ass’” a rugged biker that kicked ass in and out of the ring.

And let's not forget the “Ministry of Darkness” persona at the end of the 1990's. Even though those persona’s were different from The Deadman persona on the surface, the core fundamentals of The Undertaker gimmick were still the same.  He destroyed his opponents, so the fans did not hold it against Taker, he was still popular with them.

Why is this gimmick of The Undertaker still over with the fans 22 years later? There are a number of answers to this complex question.  One answer is the nostalgia factor, wrestling fans love a blast from the past.

His delivery when he cut promos and the way he portrayed The Undertaker character are indeed phenomenal, with no pun intended.

One more reason is the legendary WrestleMania streak of 19-0 that The Undertaker has amassed in his career.  He has faced off against some of the greatest pro wrestlers of all time to build this unprecedented record: Ric Flair, Shawn Michaels, Triple H, Edge and so many others that have fallen by the wayside at the hands of The Phenom.

Wrestling fans have respected and admired Taker for that reason alone, that respect and admiration still resonates today.

Whatever other reasons why this gimmick is over with the fans, it works, no question.  If his WrestleMania match against Triple H will be his last match, then it will be a great tip of the hat to the career and the pro wrestling icon that is The Undertaker.