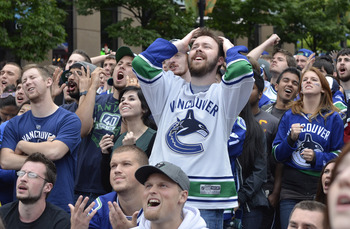 Vancouver Riots 2011 Video Sees Idiocy Abound After Stanley Cup Loss, But Which Rioters are the Dumbest?

When the final horn sounded on Game 7 of the Stanley Cup Finals on Wednesday night, Vancouver Canucks fans were understandably bummed out. After all, they'd just watched their beloved club, the best team in the NHL for virtually the entire season, forget how to score goals and fall 4-0 in the biggest game in the club's history, extending their Cupless streak to 0-for-forever, and extending Canada's general misery for another season (18 years and counting since their last Stanley Cup).

So, it was entirely understandable that they were a bit hurt, and incredibly angry, and like all hurt, angry, disappointed fan bases (and even many jubilantly excited fan bases), they took out their frustrations in the classiest way possible: they rioted.

But, out of this colossal outpouring of stupidity, which mental marvels rank as the dumbest of the day?

We here at Bleacher Report have broken down the dumbest, most idiotic moments of the riots, and we're bringing you a good, old-fashioned power ranking of the biggest idiots of the Vancouver riots.

5. Canucks Fans Duke It out in the Dumbest Way Possible

Typically, when a team as beloved as the Canucks lose a crucial game like this, fans' tempers tend to run a bit hot, and fights like this are a fairly frequent occurrance.

But, these two mental marvels can't even get the most basic rioting activity right. They do realize they're not hockey players, right? They have to know they're not actually Canucks players, but that doesn't stop them from grabbing shirts, whiffing literally every punch they throw, and eventually winding up laying all tangled up together on the ground, still scrapping terribly.

The rioting crowd gets so bored by the fight, they go look for more stuff to set on fire. Stupid, and just sad, guys.

As an aside, the best (and dumbest) part of this video comes at the 1:15 mark, with the guy in the ski mask. Does he think the cops won't find it the least bit suspicious that he felt the need to hide his identity in a mob? Way to guarantee yourself a ride in a squad car for some interrogation, genius.

This one's hard to rank, because we have no idea what's being said. But, that doesn't mean there's not plenty of stupidity in play here.

First of all, you've got your amateur videographers shooting the fight, who provide their own brilliant commentary on it.

Then, there are the other fans, who don't seem to notice (or are secretly hoping that this fight comes to it's inevitable conclusion), and don't step in even when it's clear that the little guy's about to get hit.

Then you've got the clearly overmatched Canucks fan, who continues running his mouth to the random guy who's clearly both bigger and stronger than he is, despite the warning "step off" shove. You can see the size difference as clear as day in the video, and even a possibly drunk fan like the guy in the jersey had to stop at some point and say "Wait, I'm looking up at this guy, maybe I should just shut my mouth and walk away."

Sure, he thinks he's got "backup", but given the outcome of the video, a nasty one-punch KO, the guy needed a whole lot more backup than he thought he had, and his backup's only real job seems to be getting the smelling salts and making sure he's not out for good.

Way to go, dude. Everyone else (even your backup) saw this coming a mile away, except for you.

I don't even know what to say to this. I imagine this guy just had the most excruciating experience of his life, so it's hard to make fun of him, but, darn it, we're going to try.

He seems like one of those instigators, trying to rally the troops to go smash some more newspaper boxes, or to set another car on fire. But, he's doing it with the cops standing literally ten feet away, and they tend not to like instigators very much. He's about to throw something, then gets distracted, turning away from what is soon going to become a very important area to pay attention to.

That's because a flash-bang grenade, typically used to disperse rowdy crowds, is tossed (or launched) in his direction, catching him right in a place you never want to hear the words "grenade hit" in reference to.

Of course, he starts to double over in pain, only for the grenade to explode point blank to a region you never want to expose to an explosion.

Something tells me he's regretting the decision to join the riot now. But, that's what you get for trying to throw stuff right next to the cops.

On the plus side, he's going down in riot infamy, as the guy who took a flash bang in the one place you never want to take one.

2. De-Throning the King of the Porta-Potties

You have no idea how tough it was to pick between this and the top video. Both of them are clearly the dumbest moments of the riots, and really, it was too close to call.

This one has more stupidity at play then the next one, but each of the dumb decisions is slightly smarter than the one giant dumb moment in the next.

Here, we've got one mental marvel standing on top of the porta-potties, probably playing king of the toilet or some other ridiculous drunken game that he's the only one playing. It's not really explained why he's on top of the potties, but he's relatively harmless, so the cops in the vicinity just let him be the drunken king of his potty realm.

But, he's not the only moron in this picture.

That's because we've also got the genius who, for reasons still unbeknownst to pretty much everyone other than himself, takes umbrage with the toilet king, and decides to knock him from his poo-smelling perch. How does he do this? By turning himself into a human battering ram and sprinting full speed at the potty, slamming himself full on into the plastic throne, his thick skull dislodging it from its base and sending the toilet king clattering to the ground on his head.

Fortunately, the cops are already standing there, ready to beat the snot out of the mental marvel, who promptly tries to fight them, only to realize they're cops and he's got no real chance.

How is this a good idea? How is it a good idea to attack the toilet king with cops literally all over the place and try to do unprovoked physical harm? Seriously dude, just let the idiot on the porta-potty have his moment.

This was our champion by the slimmest of margins, for reasons that will become obvious to you the instant you watch it.

Here, we see a beautiful BMW sports car engulfed in flames, as typically happens during a riot. Sure, the cars set on fire are usually not this nice (typically some sort of box-shaped vehicle from the late 1980s or early 1990s), but we'll chalk it up to this being in Vancouver. But, that's not what sets this apart in the pantheon of idiocy.

No, what makes this the dumbest moment during the riots is the mental marvel who decides to try and jump a flaming car.

To be fair, he doesn't really try to jump it; he more tries to run across it from hood to trunk, but that's what makes it even more stupid when he fails spectacularly, faceplanting on the flaming vehicle..

Even the television reporter, who is usually a bastion of impartiality, calls him an idiot.

Why he decided to run across a car engulfed in flames is beyond me, but I have a feeling it involved a copious amount of alcohol and some sort of drunken, douchey braggadocio. He's unbelievably lucky he didn't catch himself on fire, especially after he bites it on the roof and rolls off into the biggest part of the fire.

Words can't describe the level of stupidity at play here, or the depth of idiocy that likely went into the decision. But, there's little denying that by engaging in such tremendous idiocy, this mental marvel is without a doubt the biggest idiot of the Vancouver riots.

Way to go, sir. Hope it was worth almost catching on fire to earn this dubious distinction.