NHL: Top 15 Goalies of All TIme 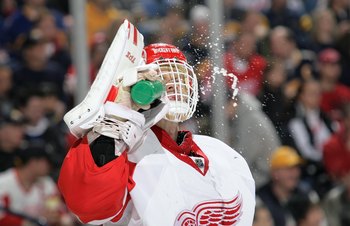 As some of you may know, I started a list counting down the top 100 players of all time a while ago. I got up to the top 70 players and then life got in the way. I now have the time to finish the last 30 players. First, I want to count down my top 15 goalies of all time.

Goaltending is the most important and interesting position in hockey. Without a decent goalie who can handle pressure, a team is going to go no where fast. It has also produced some interesting people. People such as Glenn Hall, who threw up before every one of his games in hoping that it would help him play well.

I hope you enjoy the list and please keep a look out for the continuation of my top 100 player list in the coming weeks. 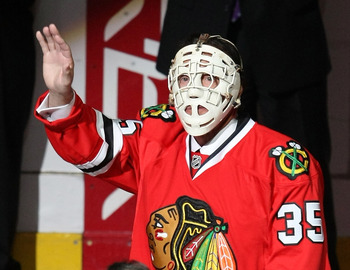 Tony is Phil Esposito's younger brother and played just 13 games for the Montreal Canadiens to start off his NHL career before the Chicago Blackhawks claimed him in the intra-league draft in 1969. Esposito would go on to play the rest of his career for the Hawks.

The biggest knock against Tony is that he never won a Stanley Cup and his playoff stats don't compare favourably to his regular season stats. The Hawks never missed the play-offs with Esposito in net, but he was never able to win the big games.

Esposito had a hybrid style and was one of the first goalies to play the butterfly style. His 15 shutouts in 1969-70 is still a modern day record for one season. Along with Ken Dryden, Esposito played for the famous 1972 Summit Series Canadian squad. 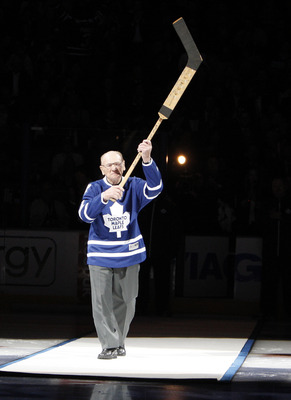 Bower got a late start in the NHL despite being one of the best goalies in the AHL. However, he made the most of the time he had and played into his mid 40's. Bower won four Stanley Cup Championships with the Leafs, the last coming in 1967.

Bower emerged as an NHL starter after the Leafs claimed him in the dispersal draft in 1958 when he was already 34 years old. He would go on to play 12 seasons for the Leafs despite his age when he first joined the team.

Bower played with a reckless abandon, despite never wearing a mask. He poke checked a lot and was a rare breed in that he came out of his crease to play the puck, something that was extremely rare in his day. 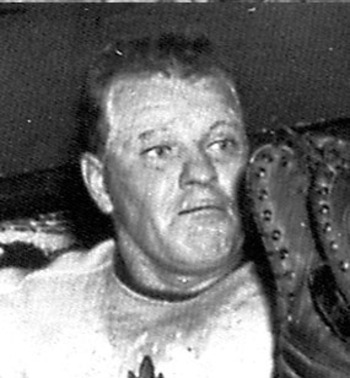 Broda was originally property of the Detroit Red Wings, but was sold to the Toronto Maple Leafs for just $7,500. That is one decision that Detroit would eventually regret.

One of the most popular Leafs in his day due to his flair and out going personality, Broda is considered one of the greatest netminders in the history of the Toronto Maple Leafs franchise.

Broda's cool and calm demeanor helped him reach five Stanley Cup finals during his NHL career and despite being criticized by Leafs management for being overweight, Broda worked hard in practice and was always superb during the regular season. He was inducted into the HHOF in 1967. 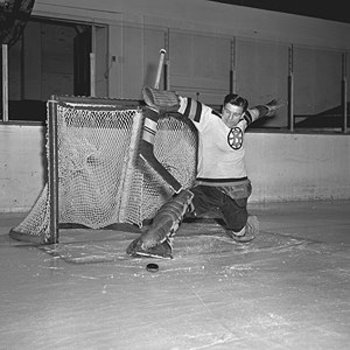 Brimsek had all the pressure on him when he entered the NHL with the Boston Bruins, as he was replacing a legend in goal in the aging Tiny Thompson.

Nicknamed "Mr. Zero" for his ability in shutting out the opposition, Brimsek had the greatest rookie season ever for a goalie and led the Bruins to their second ever Stanley Cup in 1938-39.

Brimsek was the perfect stand up goalie and his calmness in the net helped his team throughout the years. He was great at using his stick to stop pucks and was one of the first goalies to get back at players for taking liberties with him. He was inducted into the HHOF in 1966.

A great stand up goalie, Bernie Parent led the Philadelphia Flyers to their only two Stanley Cup victories in franchise history as he won the Vezina and Conn Smythe trophies in both years.

Parent patterned his style of play after the legendary Jacques Plante and was often coached by Plante as well. Unfortunately, Parent had to retire early at the age of 34 after a stick struck his right eye and caused him to lose a lot of vision.

Parent was a rare goalie in that he constantly played with fear, something he said actually made him play better. Hard to argue with the results. 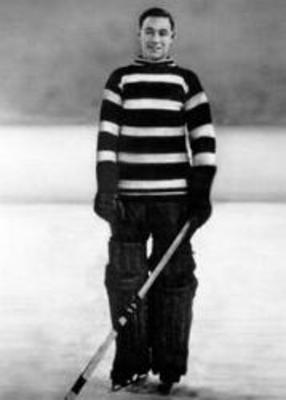 Clint Benedict was one of the first superstar goalies. Despite playing in the era of Georges Vezina and George Hainsworth, he received most of the attention and adoration.

Benedict's strategy of "accidentally" falling to the ice to make a save or smother loose pucks led the NHL to change the rule that had required goalies to remain standing throughout the game. He was the NHL's first true superstar goalie.

Benedict was the first goalie ever to wear a mask after getting hit in the nose by a puck, but it was not a permanent thing for him. He retired in 1931 and was inducted into the HHOF in 1965.

Career Regular Season Stats: Did not play in NHL

Career Playoff Stats: Did not play in NHL

Drafted by the Montreal Canadiens, Tretiak didn't get to play in the NHL due to him being born in the Soviet Union. However, many people consider him one of the greatest goalies to ever play the game.

From 1971 to 1984, he was the Soviet league's First Team All-Star goalie, spending 14 consecutive seasons as the number one man in the Soviet cage.

During this amazing string with the Central Red Army squad, Tretiak won 13 league titles, captured the MVP honors in the Soviet league five times, was awarded the Order of Lenin for his service to the USSR in 1978 and won the coveted Golden Hockey Stick as the outstanding player in all of Europe in 1981, 1982 and 1983.

In the 1981 Canada Cup, he was the tournament MVP and the First All-Star Team goalie, posting an amazing 1.33 goal-against average over six games against the world's best teams. 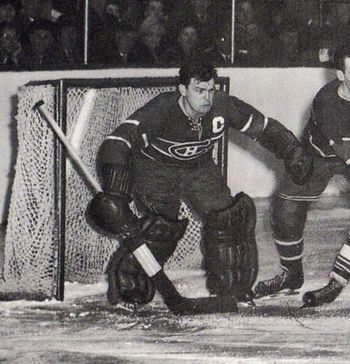 While he didn't have a very long career, it was an extremely good one. Durnan was a rare breed of goalie as he would catch with both hands and switched during play often.

Durnan was also a great leader as proven by the fact that he is the last goalie to ever be a captain in NHL history. It's hard to imagine a better four-year introduction to the NHL than Durnan's.

He won the Vezina Trophy for the four consecutive seasons and cemented himself on the First All-Star Team.

Montreal won the Stanley Cup in 1946 and finished first in the league after the regular season each year except 1947-48. Durnan suffered his only losing season in 1947-48.

For the first and only time, he didn't lead the league in goals-against average and Montreal missed the playoffs. 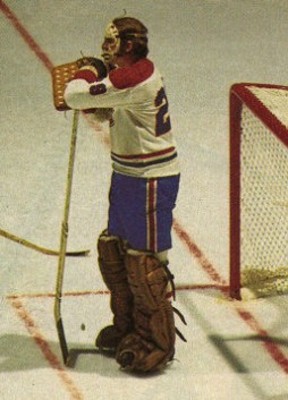 Surprisingly, Dryden was able to win the Conn Smythe Trophy as playoff MVP before he won the Calder Trophy as rookie of the year. He was a surprise call up with six games left in the season and he went on to lead the Canadiens to a Cup win.

Ken Dryden demonstrated brilliant technique as a goalie and an ability to win even in unfavorable situations, qualities acquired with experience. The stats he was able to put up and the amount of cups he won in his short career absolutely boggle the mind.

It's to bad Dryden was so smart and had aspirations of finishing school. If he had continued his hockey career, we would probably be talking about him as a top-three goalie instead. 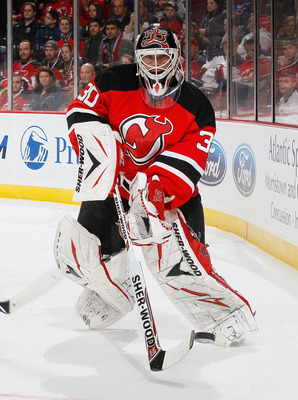 Some say Brodeur's success is largely due to the team he plays on, but there is no way you have this type of career without immense skill, no matter what team you play on.

Brodeur brings tremendous stability to the Devils. He plays a stand-up style, challenges shooters, and has fantastic mobility from side to side and high crease-to-goal line. With positioning, he is so strong that he does not need to flop. He relies on being in the right place at the right time.

By the time his career is over, Brodeur could very well have over 700 wins, well ahead of anyone else in that department. 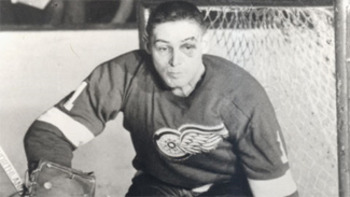 Considered by many to be the best goalie to ever play the game, Sawchuk is in the top tier of netminders. His 103 shutouts was a league record for a long time and he held the record for most wins in a career for many years until Patrick Roy broke it not to long ago.

Sawchuk wasn't a relaxed goalie. The pressure of playing in the NHL got to him and affected his health and he was battling some sort of injury for most of his career.

He received 400 stitches throughout his career, he had bone chips removed from his elbow after the 1952 Stanley Cup, he suffered chest injuries from a car accident and his back was perpetually in knots because of his style of play. And he won more games than any other goalie in the history of the game up until recently. 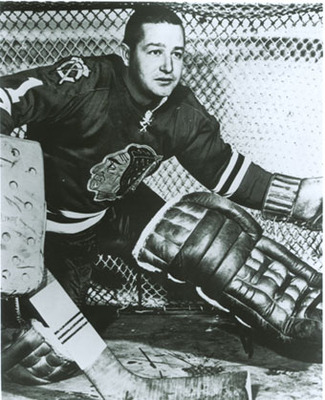 Nicknamed "Mr. Goalie" for his consistent and long-lasting success in the National Hockey League. Year after year, Hall was a familiar and intimidating sight in nets across the continent. He hardly missed a game or an award in his 18 NHL seasons, and only four times did he finish a season with a losing record. His 84 career shutouts, fourth all time, guaranteed his place in the Hockey Hall of Fame as one of the sport's best goaltenders.

Though he suffered many injuries, he played for 502 straight regular-season games and another 50 in the playoffs. The endurance record finally came to an end on November 8, 1963, when he injured his back. Ironically, he pulled a muscle not in a game, but while getting dressed when he bent over to adjust a strap.

Hall spent 10 seasons in Chicago and was placed on the All-Star team eight times, five of those on the First Team. In 1961 he backstopped the Hawks to their first Stanley Cup championship since 1938. Hall was also well know for puking before every single game he played in, something that made him play better according to him. 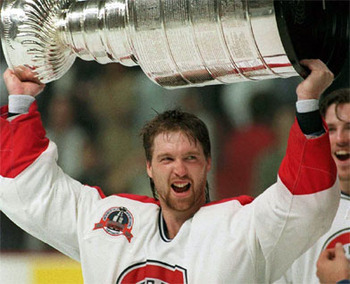 It can be argued that Roy might be the best goaltender to ever play the game and one of the most influential. He popularized the butterfly technique and it ended up populating the NHL with goalies from Quebec.

Naturally, being a Wings fan made me a Roy hater, but there is no doubting the impact he had on the game of hockey. 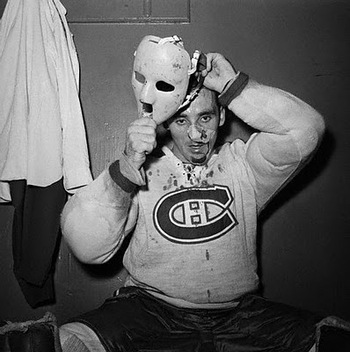 Plante is well known for his role on the late 1950's Montreal Canadiens dynasty and for popularizing the wearing of a goalie mask. Plante was the first goalie to regularly come out his crease to play the puck and stop it behind the net for his defensemen.

Plante's stand up style emphasized positional play and cutting down the angle, he was a pioneer in regards to how the goalies played the game. He was inducted into the Hall of Fame in 1978. 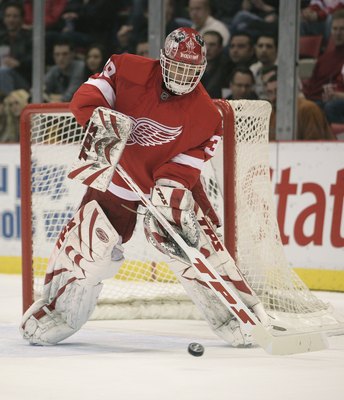 If Dominik Hasek had started his NHL career before the age of 25 (as a back-up), many more people would know him for what he truly is, the best goaltender in National Hockey League History.

Despite not being a starting goalie until the age of 27, Hasek has an incredible 389 wins, six Vezina Trophies, and two Hart Trophies. He was the first goalie to win the Hart since Jaqcues Plante.

Hasek is best known for carrying the Buffalo Sabres on his back, especially in 1999 when he lead them all the way to game six of the finals, a game that Buffalo had no business being in. Hasek would win two cups in his career, one as a starter in 2002.

Hasek is also well known for the unique style he brought to the NHL. He flopped around, flailing his arms and legs in hopes that the puck would hit his body somewhere. He is the best goalie to ever play in the NHL.