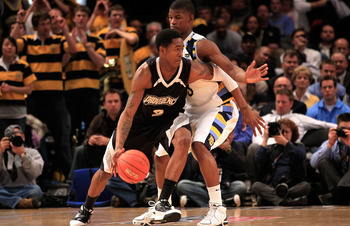 Time to get over that. Like 28 of the 30 front offices in the NBA, John Paxson and Gar Forman are now focused on the NBA draft and the free-agent market.

The Bulls have numerous routes they can take with these picks. Most likely, they will try to package them in a trade or as a way to move up and select a player who could actually make their 12-man roster. The only players Chicago is losing to free agency are Kurt Thomas, Brian Scalabrine and Rasual Butler.

At this point, it's hard to say what the Bulls are looking for in the draft, but it would seem like a wing player and some more frontcourt depth would be a priority. I'm assuming the Bulls could move no higher than 20th, so no Jimmer for the Bulls. 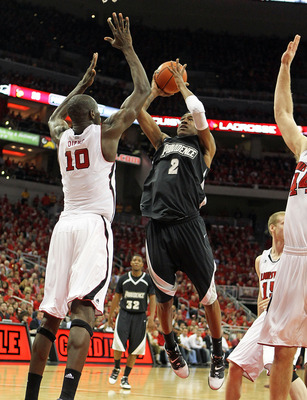 At 6'5" and 195 pounds, Marshon Brooks has the right size for a shooting guard in the NBA. Moreover, he finished second in the entire NCAA in scoring while at Providence, putting up 24.6 points per game. That sounds like the type of scoring the Bulls need from the shooting guard position.

Even more impressive is his wingspan and quick feet, which, with a bit of teaching from Tom Thibodeau, could help Brooks develop into a quality defender. He can create off the dribble with a variety of crossovers and knows how to finish at the rim. Plus, scouts have said he has NBA three-point range already.

Sounds great, right? His basic weaknesses include isolating too much in college, not trying hard enough on defense and lacking NBA-level strength. With Thibodeau and Derrick Rose leading the Bulls, however, those should get fixed in a hurry.

He should be the Bulls primary target. He has reportedly been impressive in workouts, so the Bulls may need to package their picks to move up and get him. 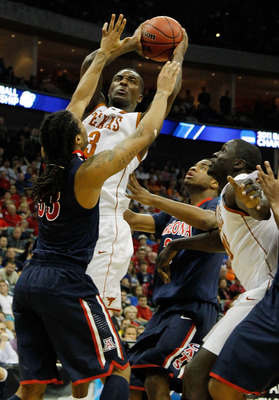 Jordan Hamilton is a 6'8" wingman who can slash to the basket and finish at the rim in a variety of ways. His can hit jump shots, but his release is a bit awkward and he has a knack for fading away when he shoots. Remind anyone of Ronnie Brewer?

Still, picking up someone like Brewer would not be such a bad thing. And he’s a more consistent shooter than Ronnie, even if he has a weird release. Hamilton is a good rebounder as well and has the length to stay in front of other shooting guards.

He would fit nicely into Tom Thibodeau’s system. Currently, he’s projected to be taken in the early 20s, so the Bulls would likely have to move up to take him as well. 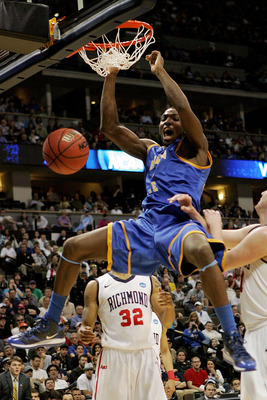 Kenneth Faried would immediately mesh with the Chicago Bulls. He’s a high-energy player who fights for every rebound and plays tenacious defense.

The major thing working against Faried is that he’s 6'7" and a power forward. He has drawn comparisons to players like that who have been successful (Dennis Rodman, Paul Millsap), but it’s always a gamble. He averaged a stunning 13.3 rebounds per game at the college level.

If Faried fell to the Bulls at pick No. 30, I could see them taking a chance on him. Otherwise, he does not fit a need enough to move up and draft him. 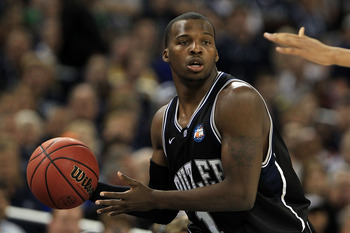 If previous drafting by John Paxson is any indication, Shelvin Mack will be a member of the Chicago Bulls. Paxson has proven time and time again to favor players who were winners at the college level. Ben Gordon, Luol Deng, Kirk Hinrich, Tyrus Thomas and Derrick Rose all fit that bill.

Though I never cared for Gordon, Mack has the potential to become a similar player. He’s only 6'2", but is a sparkplug offensively, and with a bit of work, could develop into a point guard. It might take him a few years to do so, but by that time, C.J. Watson’s contract will be up, and he could learn from Rose how to score and distribute at the point guard spot.

He’s projected as a late first-round pick, so the Bulls could sit back and wait for him to come at pick 28 or 30. 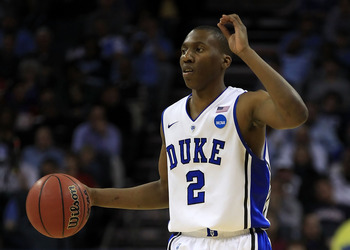 Selecting Nolan Smith is more or less equal to drafting the aforementioned Mack. If I had to compare Smith to a former Bulls player, it would probably be another Duke product, Chris Duhon.

Smith, like most Duke draftees, comes with a high basketball IQ. However, he lacks NBA range on his three-pointers and isn’t fast enough to create separation easily with his defender. He’s also 6'3", which would mean he’d have to play point guard at the risk of being too undersized on defense.

At this point, it’s hard to imagine the Bulls taking Smith with one of their first-round picks. He’s projected as an early second-rounder, so the Bulls would have to hope he falls to pick 44. 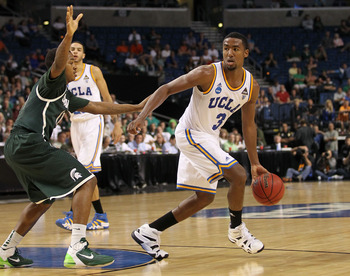 Malcolm Lee was considered at first to be an early second-round pick, but after a few impressive showings, scouts have reportedly said his stock is rising. That could mean the Bulls might be interested in using one of their first-round picks on the 6'5" combo guard.

Lee’s glaring flaw is his inconsistent jump shot, but he makes up for it in his ability to get to the basket and play solid defense. He’s right around 200 pounds so he could probably stand to add a bit more muscle, especially if he has to guard shooting guards, but with a bit of teaching from the Bulls’ staff, it’s not hard to imagine him coming off the bench as a combo guard based on the situation.

The luxury the Bulls have in this draft is not needing their rookies to contribute right away. Obviously, if a player like Lee could, that would be great, but Chicago has enough depth to allow players to develop for a year or two. 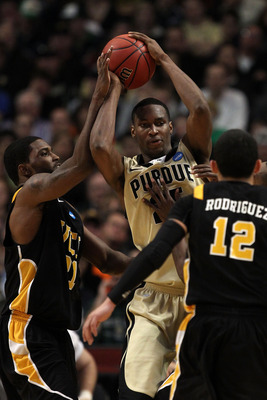 If there is a player in this draft who could provide what Taj Gibson does for the Bulls, it might just be JaJuan Johnson. He’s 6'10" and is a great leaper, which combined with his seven-foot wingspan makes him a force on defense and on the glass.

Even more like Gibson, he comes into the NBA with extensive experience, playing a full four years in college. He lacks superior size, but so do the majority of rookies. He’ll fill out nicely once in the NBA.

Right now, Johnson looks like a late first-rounder, which is perfect for Chicago. Some sources have San Antonio taking Johnson with the 29th pick (perhaps so he can learn and develop under Duncan), so the Bulls might have to nab him with the 28th selection. 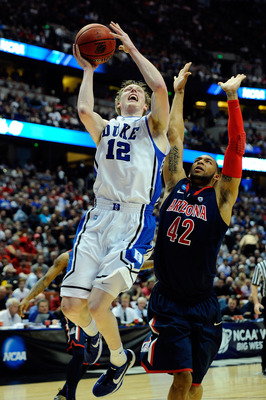 The Bulls already have Carlos Boozer and Luol Deng and made a major play for J.J. Redick last summer. Seems like Paxson has a thing for Duke players.

Kyle Singler is the type of player who isn’t going to come with any surprises. He’s a 6'9" small forward who will try hard on defense and has the ability to knock down shots. However, his upside is limited, and at best, he’s probably a similar NBA player to former Duke forward Mike Dunleavy.

It’s hard to imagine the Bulls using a first-round pick on a player with such limited upside, but should he fall to pick No. 44, Chicago would likely snag him to become a role player. 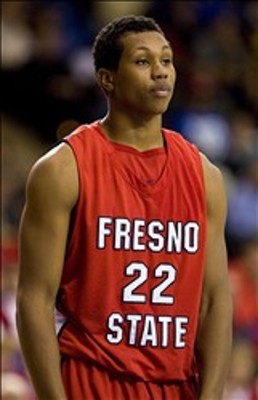 Greg Smith is one of those rare second-round players who has better physical tools right off the bat than most first-rounders. At 6'10" and 256 pounds, he’s willing to bang down low and has proven to have a great motor and passion for the game.

Of course, there’s a reason he’s a second-rounder. He has limited post moves and his free-throw shooting is abysmal (around 50 percent). He’s also slow in transition, which could be a problem for the Rose-led Bulls.

If he’s around in the second round, the Bulls should take a hard look at him, especially if they decide not to resign Kurt Thomas and need another bruiser inside. 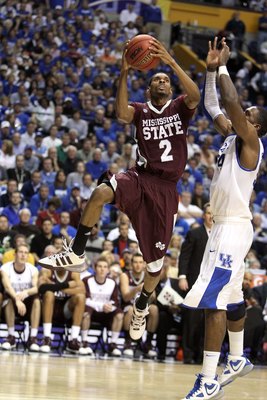 Ravern Johnson is currently projected as a middle or late second-round pick, and he will probably still be around when the Bulls select with pick 44. He’s 6'6" but a skinny 170 pounds, which impeded his driving ability in college.

On the bright side, he’s an incredibly fluid shooter from beyond the arc, which is something that Chicago desperately needs outside of Kyle Korver. It helps that he has a near seven-foot wingspan to get his shot off even with opponents converging.

He also is a good leaper, but it’s hard for him to hang with the big bodies inside. Depending on what the Bulls do with their first pick(s), he could be worth selecting as a potential specialist or future project in the second round.