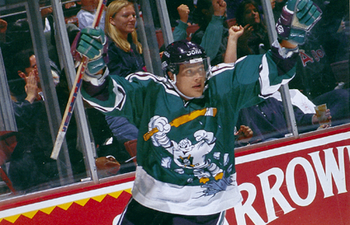 Alternate jerseys were introduced to the NHL in 1992, when the Original Six clubs wore throwback jerseys in the league's 75th inaugural year. They've taken on a life of their own in today's NHL, where clubs release new alternate sweaters every few years.

This may bother those purists who believe that it's just a cash cow for the league, but it gives the chance for those teams to atone for any previous jersey "faux pas."

Some of these sweaters are so horribly bad that you'd be hard pressed to believe an actual NHL team wore them.

Outside of the NHL, you'll also see some of the funniest or ugliest sweaters that you could ever imagine, especially in smaller market venues and, of course, overseas.

Here are 25 of the worst alternate jerseys in hockey history. 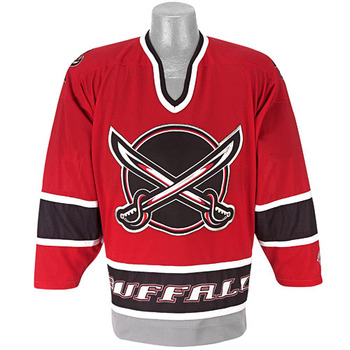 Buffalo would probably like to redo the events that led to this jersey's design and release, because it's pretty ugly.

The logo brings an almost garish feel to the sweater, and the BUFFALO along the bottom is just icing on the cake. 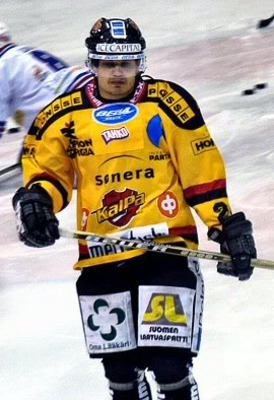 Having worked in the field of professional sports, I understand the bottom line and the need to generate revenue.

So sticking ads or company logos on your jerseys or players gets a small part of the job done—I get it. But at some point, you've got to say enough is enough, because this is ridiculous. 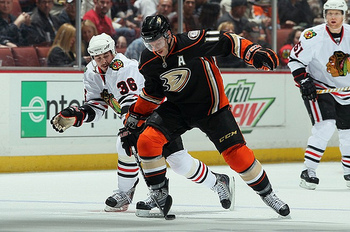 The new Ducks jerseys are infinitely better than their previous Disney-themed ones, but their third jersey isn't much to look at.

The logo and the scheme don't get it done for their alternate jersey, but then again, the Ducks haven't always had the best of luck with third jerseys. 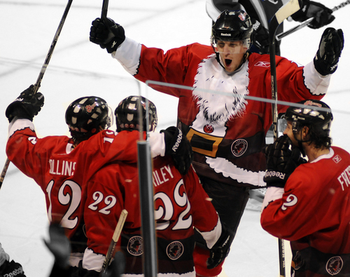 The Las Vegas Wranglers of the ECHL donned these festive Santa jerseys, but it's not their only jersey to make this list.

The beard in front and the Wranglers logo on the belt are funny touches, but it's hard not to laugh when you see Santa playing hockey. 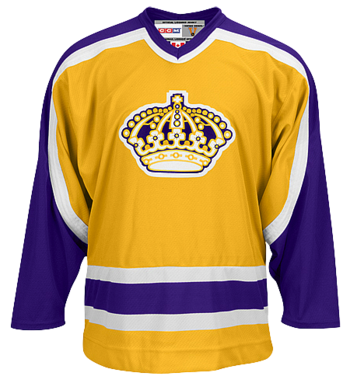 The Kings' retro jersey isn't all that bad, but the logo in front doesn't quite get the job done for Los Angeles.

It reminds me of a checker piece, and while it's simple, it makes the sweater look incomplete somehow. 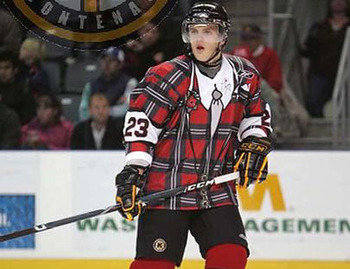 Don Cherry is as entertaining of a personality as you will ever find if you manage to look past his ego and political views. So when the Kingston Frontenacs honored "Grapes" in 2009 by celebrating "Don Cherry" night, you couldn't really blame them.

You can blame them for the jerseys, however, because these things are something else. 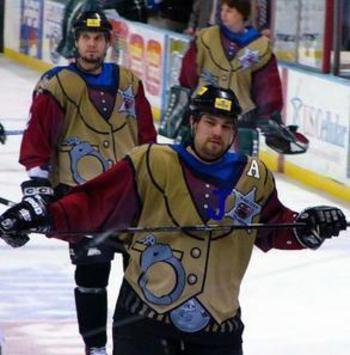 The Quad City Mallards ceased operations after the Calgary Flames decided to part ways with their minor league affiliate in 2007.

They didn't fail to leave a mark in hockey history, however, with this gem of a jersey, complete with sheriff's badge and cuffs.

It's Better Than the Flying V 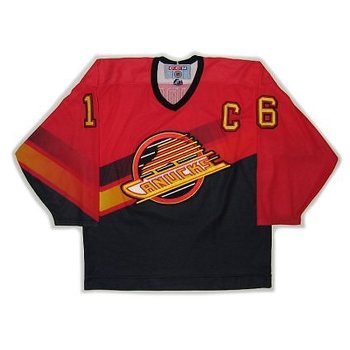 When you take the Canucks logo and put it on this color scheme with the gradient stripes, it makes for a horribly ugly combination.

The flying V jerseys aren't a favorite of mine either, but this alternate jersey makes those sweaters look like a masterpiece on ice. 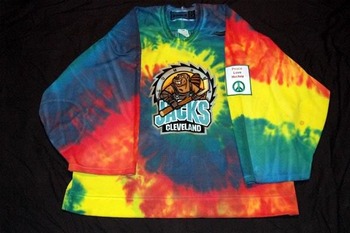 The Cleveland Lumberjacks of the IHL's tie-dyed hockey jersey is certainly colorful, but also very ugly.

The early Gund Arena era jerseys were actually pretty sharp, but the beaver holding the hockey stick jokes would get old quick with this sweater.

To Heck with It 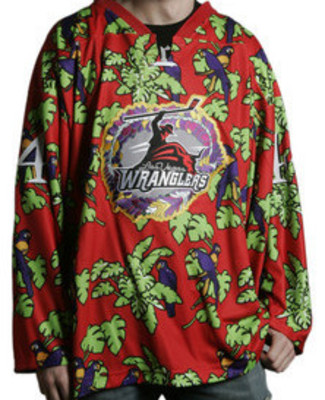 That's what I imagine the designer for the Las Vegas Wranglers thought at the moment he created this marvel, and it makes me dizzy just looking at it.

The Milwaukee Admirals of the AHL either stumbled across a picnic sale gone wrong or were inspired by the Maple Leaf waffle incident.

Either way, this guy doesn't look too happy to be playing in this jersey, and I don't blame him. 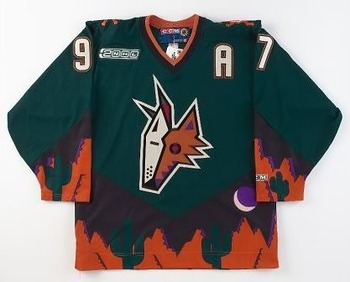 While I happen to like the Coyotes franchise and wished their story of expansion would succeed, I was never a fan of their early jerseys.

The Southwest decor is understandable and meshes as well as one can expect, but the broken neck, abstract Coyote logo always confused me. 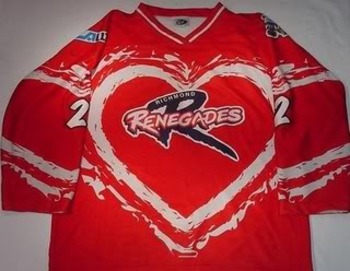 Hockey's a tough sport, and I imagine it's a lot tougher when you have to play in this jersey.

You can call this jersey effeminate, or you can call it feminine—just don't ask me to play in it.

What Is That Thing? 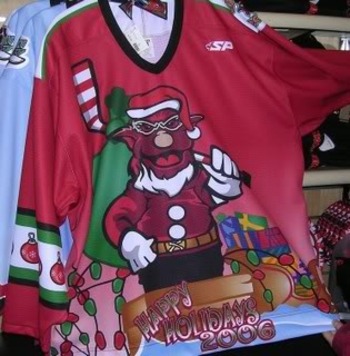 The Rocky Mountain Rage are an inactive team in the CHL who have yet another Christmas-themed jersey to grace our list. While the art isn't bad in and of itself, would you pull this sweater on to play in front of friends and family?

And what creature is that masquerading as Santa Claus, and why is he so angry? 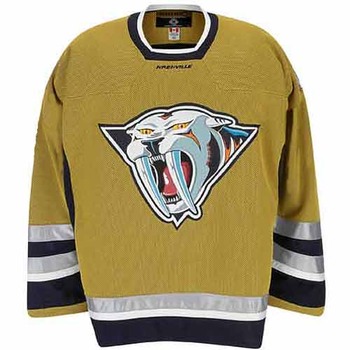 The color scheme of this alternate jersey is bad, but the logo completes its transformation into one of the worst NHL jerseys ever.

The logo fails to inspire anything but the confused look or uncomfortable chuckle. Hope Nashville got its marketing dollars' worth with this one. 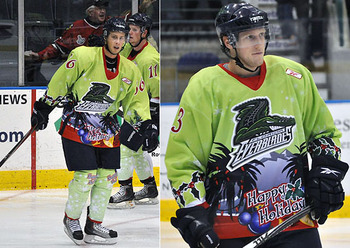 I'm not even sure where to start with this one. The color scheme, logos and palm trees don't flow well at all on this sweater. Someone in the marketing department either has a very good sense of humor or a very bad sense of style.

The Florida Everblades of the ECHL donned these jerseys in the spirit of Christmas, but there's nothing jolly about these hideous things. 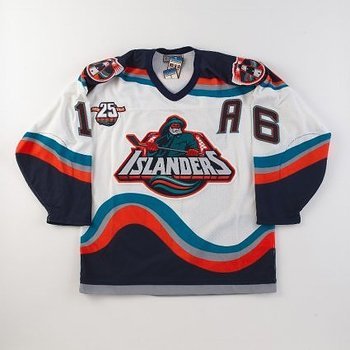 When these alternate jerseys were released, I honestly thought the New York Islanders had lost their minds.

As time has gone on, however, I've warmed up a bit to the fisherman and don't blame him for his actions in the movie I Know What You Did Last Summer.

Having said that, however, it's still plenty bad.

This jersey should come with a seizure warning because I don't know where Carey Price's arm starts and his torso ends.

While it's a part of hockey heritage, the Canadiens should have left his jersey where it belongs...in the past. 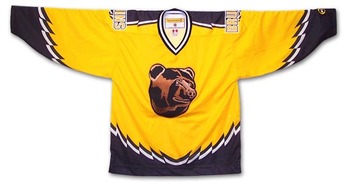 This Bruins jersey lasted quite some time, but I felt it looked too soft to represent a franchise like the Boston Bruins.

The logo looks too tame and ruins the sweater. Spelling out the team name on the shoulders in a weird font also clashes.

On a player and on ice, it made the Bruins look like a group of cartoonish characters—not a good look at all. 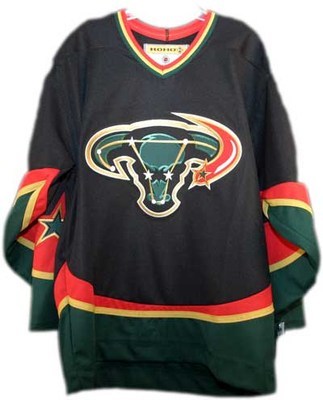 Dallas unleashed this horror in 2003, designing a logo that was supposed to be the stellar representation of Taurus.

Nicknamed the "Mooterus" for resembling the female organs, it's an embarrassing moment in Dallas Stars history. The rest of the sweater doesn't look half bad, which is truly a shame, but with a crest like that it's hard to take it seriously. 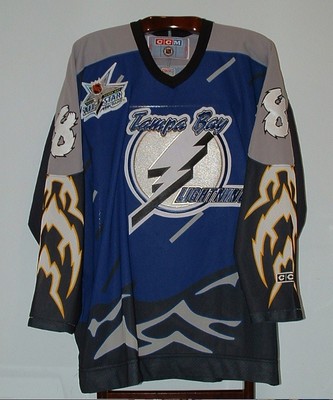 Tampa Bay's early alternate jersey is just bad. There's just too much going on on this jersey for anyone to really appreciate.

Less would really have been more in this case. With the fringed font and the streaks of lightning coming down the player's arms, it's almost comical. 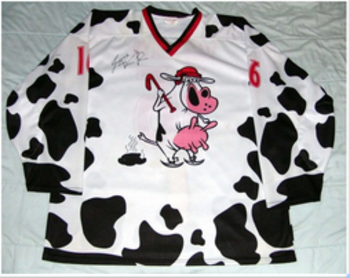 The El Paso Buzzards played in the Central Hockey League before closing their doors in 2002.

Much like the Mallards, the Buzzards made their mark in hockey history with one of the ugliest jerseys ever made.

If the cow print jersey didn't get your sides splitting, the fresh, steaming cow pattie did. Nothing says competition like fresh cow dung, and the Buzzards left their "mark" with this sweater. 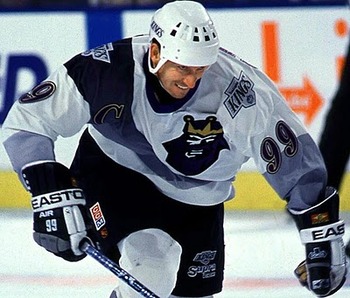 I don't know what the Kings were thinking with this jersey, and where do you start if you want to complain about it?

The Burger King logo looks angry on this sweater, but not half as angry as Wayne Gretzky, who probably had to refrain from laughing wearing this thing. 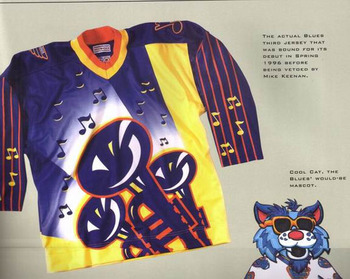 Thank goodness for Mike Keenan, who smartly killed this sweater concept in 1996 as the coach of the St. Louis Blues, because it is just comical.

Words just do not do justice in explaining how atrocious this jersey really is.

If the three raging trumpets in the front aren't enough, the cheery notes just don't look inspiring on any competitive level, let alone the NHL. 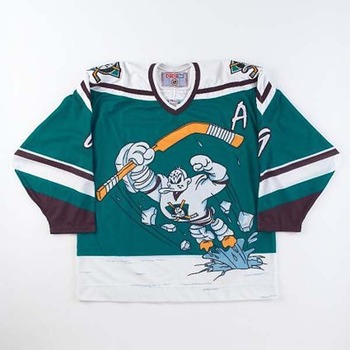 This epic fail of a marketing scheme is the single most hideous sweater in all of hockey history, donned by the "Mighty" Ducks of Anaheim.

This sweater is the very definition of hockey fashion fail, and thank goodness the TV show based on the character never got off the ground.

With the expansion of hockey in its infancy and millions of Eisner dollars, some of the world's very best artists spawned this?