NBA Power Rankings: Kobe Bryant and the 20 Dirtiest Players in the League 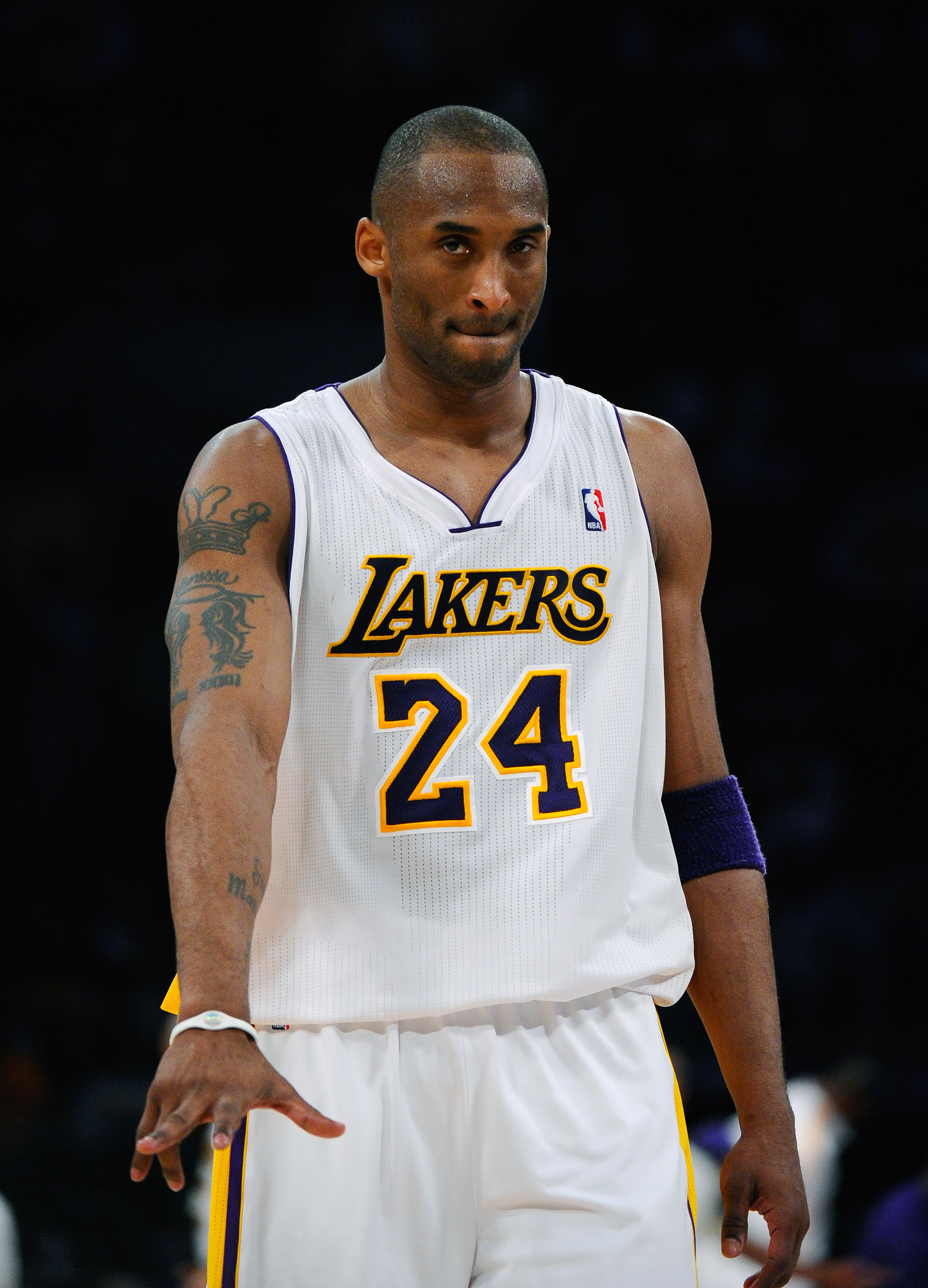 Is Kobe Bryant of the LA Lakers a dirty player?

In March of last year, Sports Illustrated released a survey of nearly 200 NBA players in which Kobe was ranked as the fifth dirtiest player in the league.

That's interesting because he hasn't fouled out of a single regular-season game in the last two seasons.

Were the players polled motivated by a bit of jealousy?  Or is their some evidence for calling him dirty?

Either way, if the players say it, he makes this list, along with 19 others... 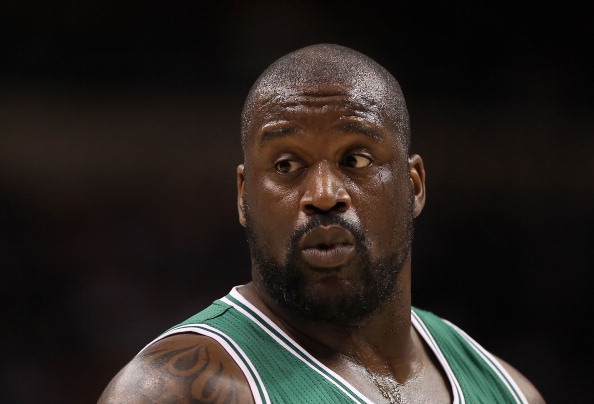 Shaq's been on the wrong end of countless dirty plays, but he's dished out his fair share of elbows and cheap shots as well.

A few years ago, he would've been higher on the list.  Seeing how he's rarely (if ever) on the court anymore, he can't be any higher than 20.

His trademark elbow clearouts wouldn't bother me much if so many of them weren't clearly aimed at the faces of his defenders. 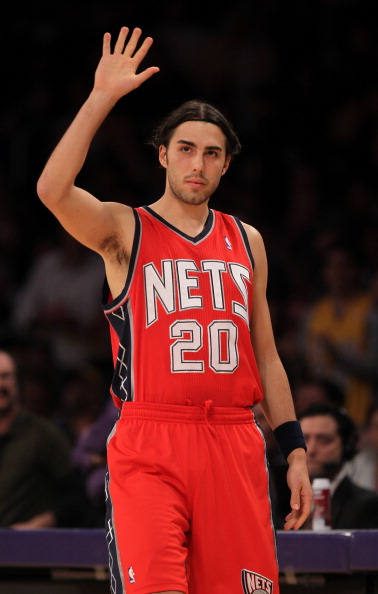 "The Machine" could probably be seen as dirty in the same way that girls in a cat fight are.

His man-to-man defense is infuriating.  He gets up under players' arms and starts tapping every part of the offensive players body.

He gets away with countless hand checks and then cries as if his dog just died when he gets called for a foul.

For the record, the ridiculous flop and ensuing antics on the floor from Goran Dragic is the most reprehensible aspect of this video. 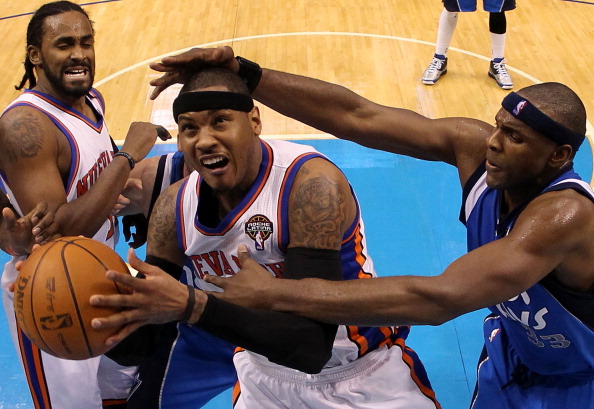 Just look at that picture.  Brendan Haywood does that a lot. 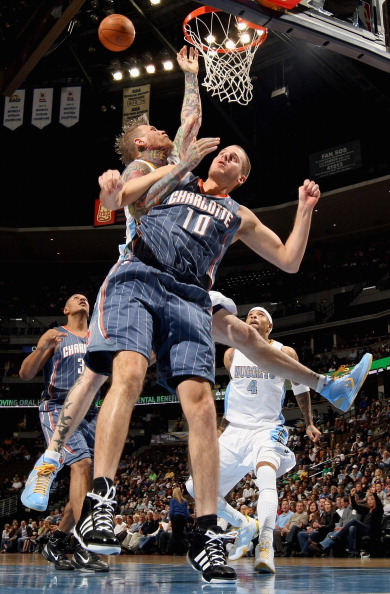 Unfortunately, Joel "The Thrilla" Przybilla is so low-profile that no one has taken the team to catalog his dirtiness on YouTube. 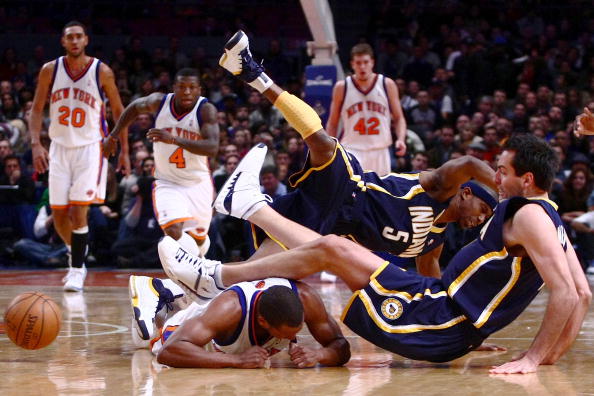 Same story here as the Przybilla slide (YouTube reference and everything). 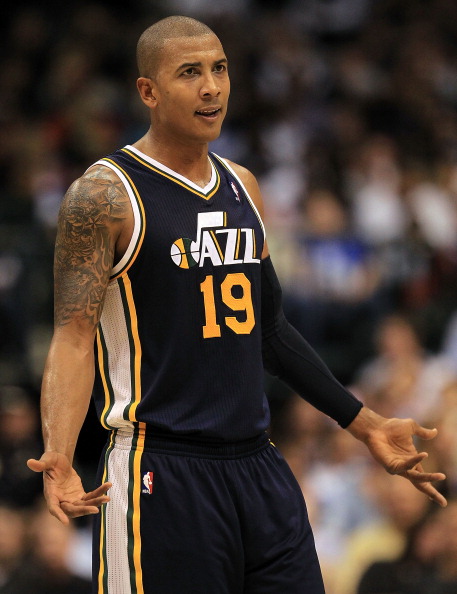 Raja Bell's reputation as a dirty player is well-known among fans and players.

The funny thing about most of the NBA's defensive specialists: they're all dirty.

Bell's clothesline on Kobe Bryant is one of the most notorious moments of his career.  The funniest part of this video is the fact that none of Kobe's teammates go off after this play. 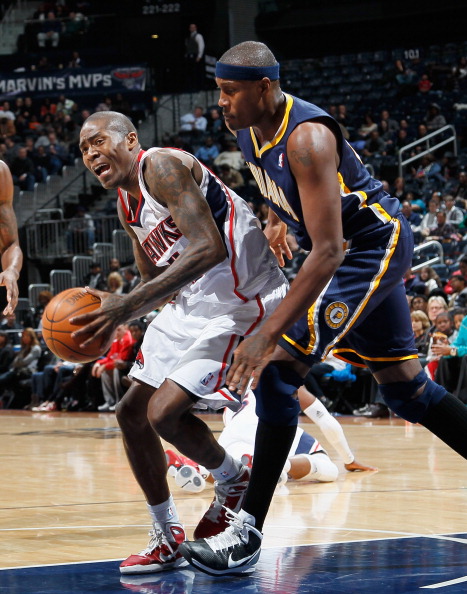 Another notoriously dirty baller, James Posey gets away with a lot because he has the reputation of a defensive specialist.

This video is simply amazing.  Can anyone tell me why Posey immediately put his hands up after spearing Luol Deng as if he didn't do anything? 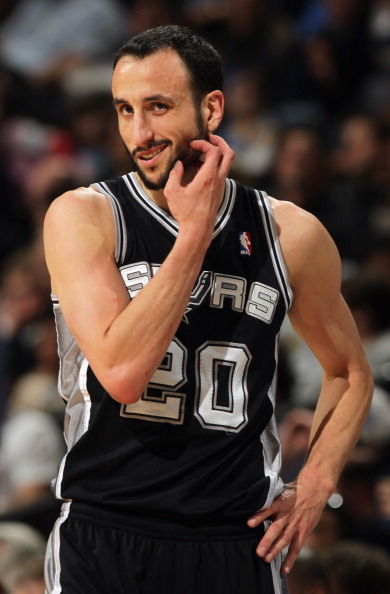 Manu Ginobili may not be horrible in terms of traditional dirtiness (although he does dish out the occasional cheap shot).

With Manu, it's his flopping that is dirty and offensive.  The song on this video is fairly dumb, and not as clever as the rapper probably thinks it is, but it does effectively demonstrate this point. 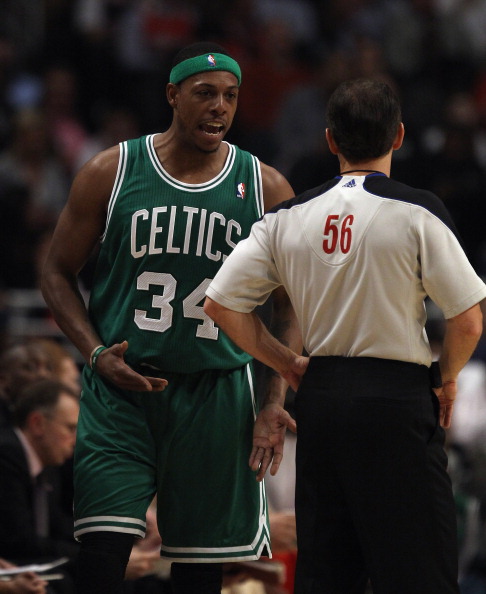 Like Manu, Paul Pierce features a lovely mix of dirtiness and flopping.

If this video depicted the only thing he'd ever done in his career, he would still make my list as one of the NBA's dirtiest players. 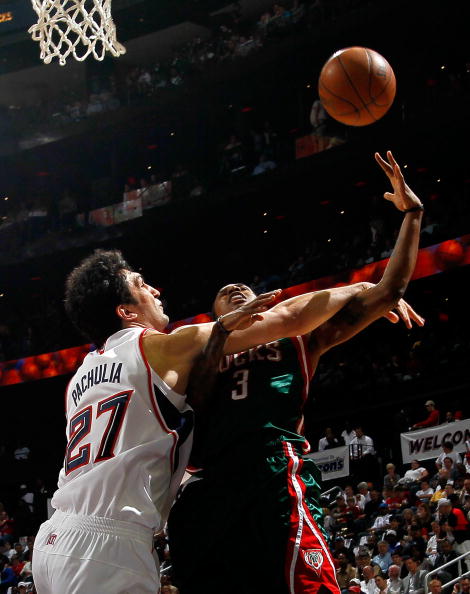 Like a lot of the big men on this list, Zaza's well known for his uncanny knack for knocking helpless players out of mid-air without even pretending to go for the ball. 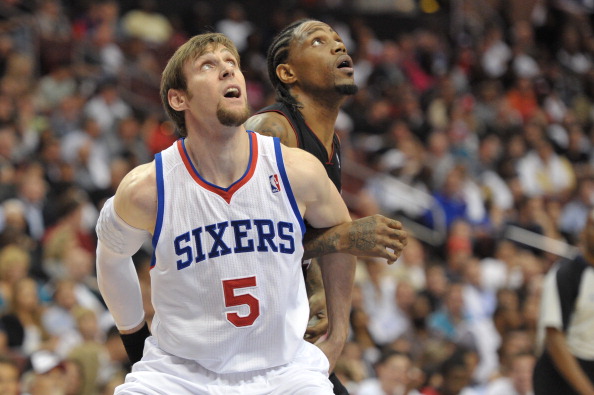 In the same survey I referenced in the introduction of this slideshow, Andres Nocioni came in third.

There's certainly something to be said for that many of your peers calling you dirty. 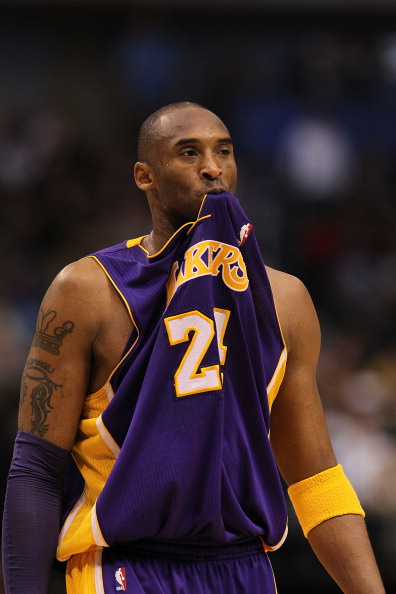 I kind of came to Kobe's defense in the introduction of this slideshow.  However, there certainly is some evidence to back up his reputation as a dirty player.

I think a lot of what happens in this video is incidental, but a lot isn't. 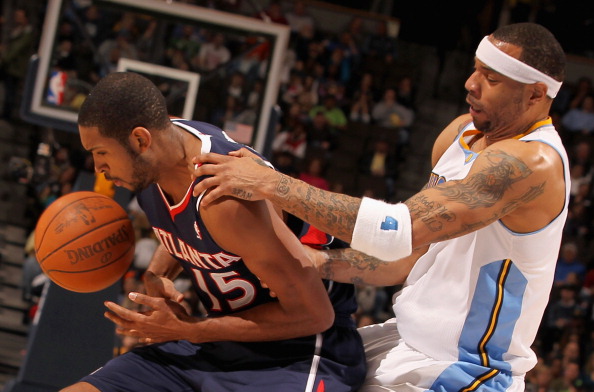 Kenyon Martin carries himself as an absolute punk on the court.  Elbows, shoves, cheap shots, grabs, trips; you name it, he does it.  His jump shot is so ugly it's dirty too.

Yes, there's certainly some acting in this video, but it's also a good example of Kenyon Martin's general basketball philosophy. 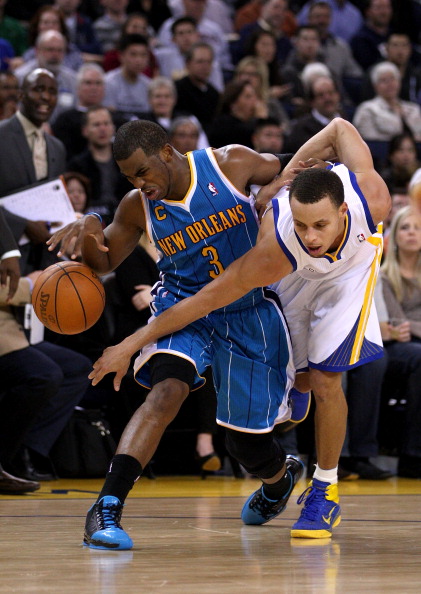 Chris Paul has some kind of little-man syndrome, Napoleon Complex, etc.  Basically, he tries to compensate for his lack of size with cheap shots, shoves and elbows.

Look at that picture.  Is anyone else amazed that he's acting like he's being fouled while trying to rip Stephen Curry's arm off his body?

And oh yeah, there's the nut punch on this video. 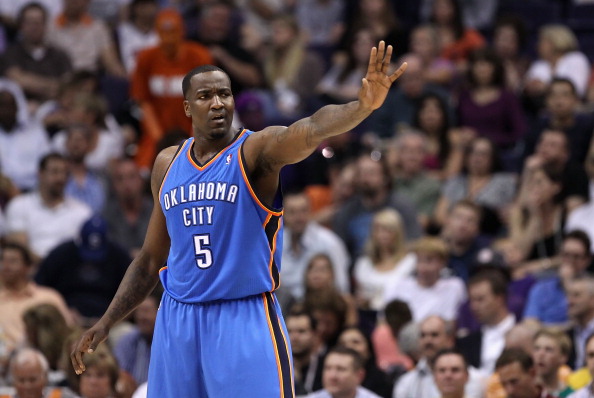 Kendrick Perkins' scowls, cry-baby faces and stomps when a foul is called on him are all reasons to put him on the list.

Plus, he plays dirty. 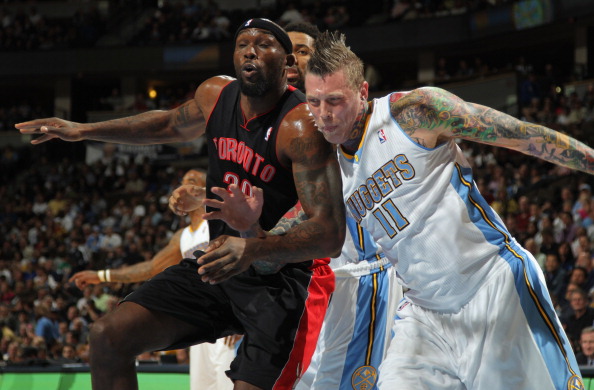 Reggie Evans is known for doing every dirty play in the book.  But what he does in this video is absolutely inexcusable. 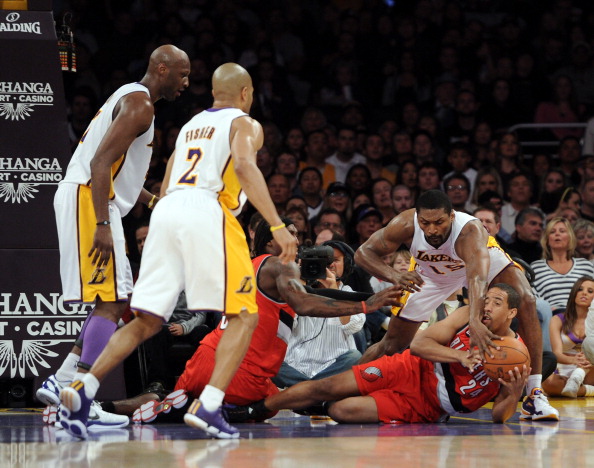 Does anyone really need an explanation on this one?

As is true with most defensive specialists, its more about getting away with illegal contact than actual defensive skill.

Artest provides countless examples of plays like the one in this video. 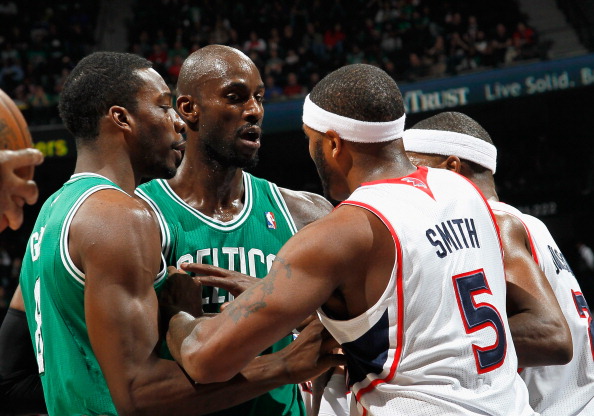 Nobody in the league tries harder to act like a punk for every second of every game.

It's not enough that he plays incredibly dirty, but he also spews thousands of profanities each game as if they're the only words in his vocabulary.  And he always tries to pick fights with the weakest players on the opposing team.

Here is an entire playlist someone put together to show what is rapidly becoming the best part of Garnett's game. 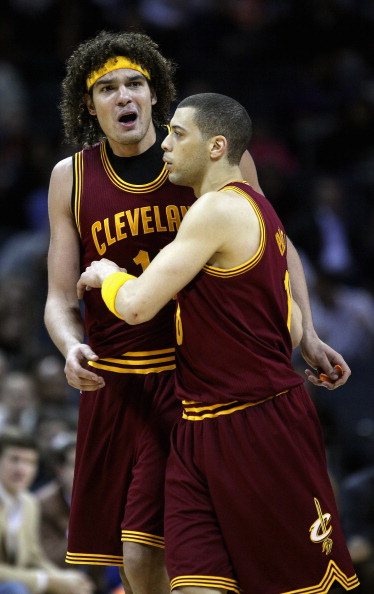 Anyone who can watch Anderson Varejao play for 10 seconds without getting angry is a more patient man than me.

He has a legitimate case for being the league's biggest flopper, dirtiest player and for having the most offensive hair. 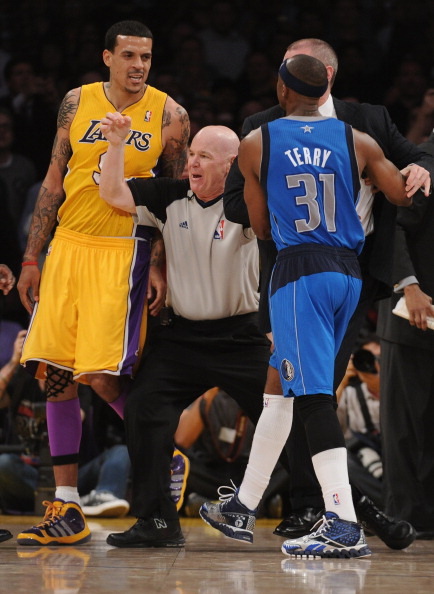 He's been in scores of scuffles, pushes people for no reason, hits players when they're not looking, and has generally acted like a fool for a significant portion of his career.

Tony Parker to the New York Knicks: It Might Be More Realistic Than Chris Paul

What are the Experts Saying About Jimmer Fredette?

Comparing the Top 50 Prospects for 2011 to Current Pros

NBA Trade Scenarios: What Each Team Needs to Target in the Offseason

Kevin Love and the 50 Best Rebounders of All-Time