San Jose Sharks: How Couture, Vlasic, Braun and 3 Others Made It to the NHL 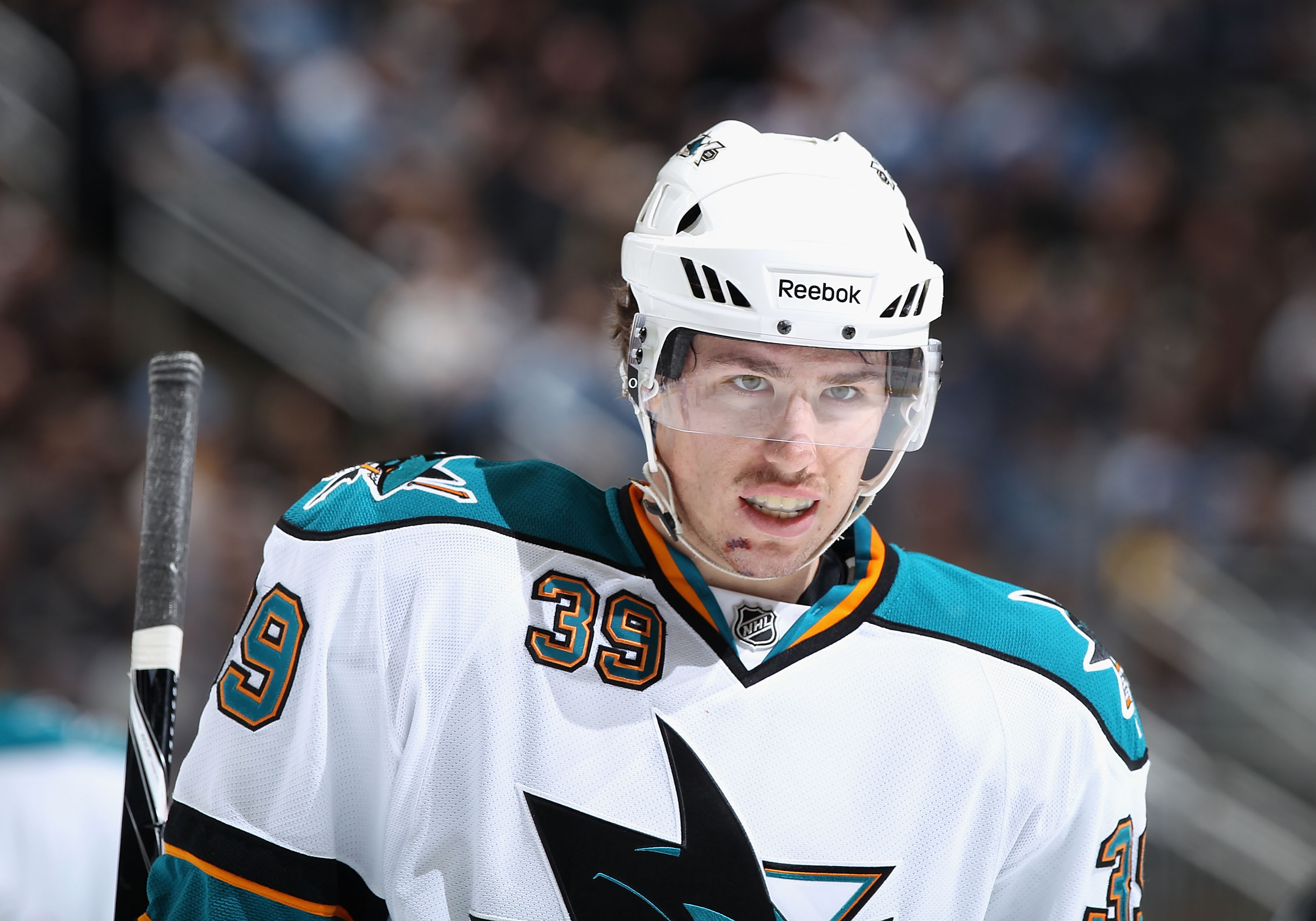 There are many paths to the NHL.

They can play collegiate hockey at schools like Notre Dame, Harvard, Minnesota and Michigan.

Many players come from overseas. There are many Russian, Czech and Swedish skaters in the league today.

Some players step on NHL ice immediately out of junior hockey. Others take a longer path through the minors.

The following are the stories of six players on the San Jose Sharks roster. 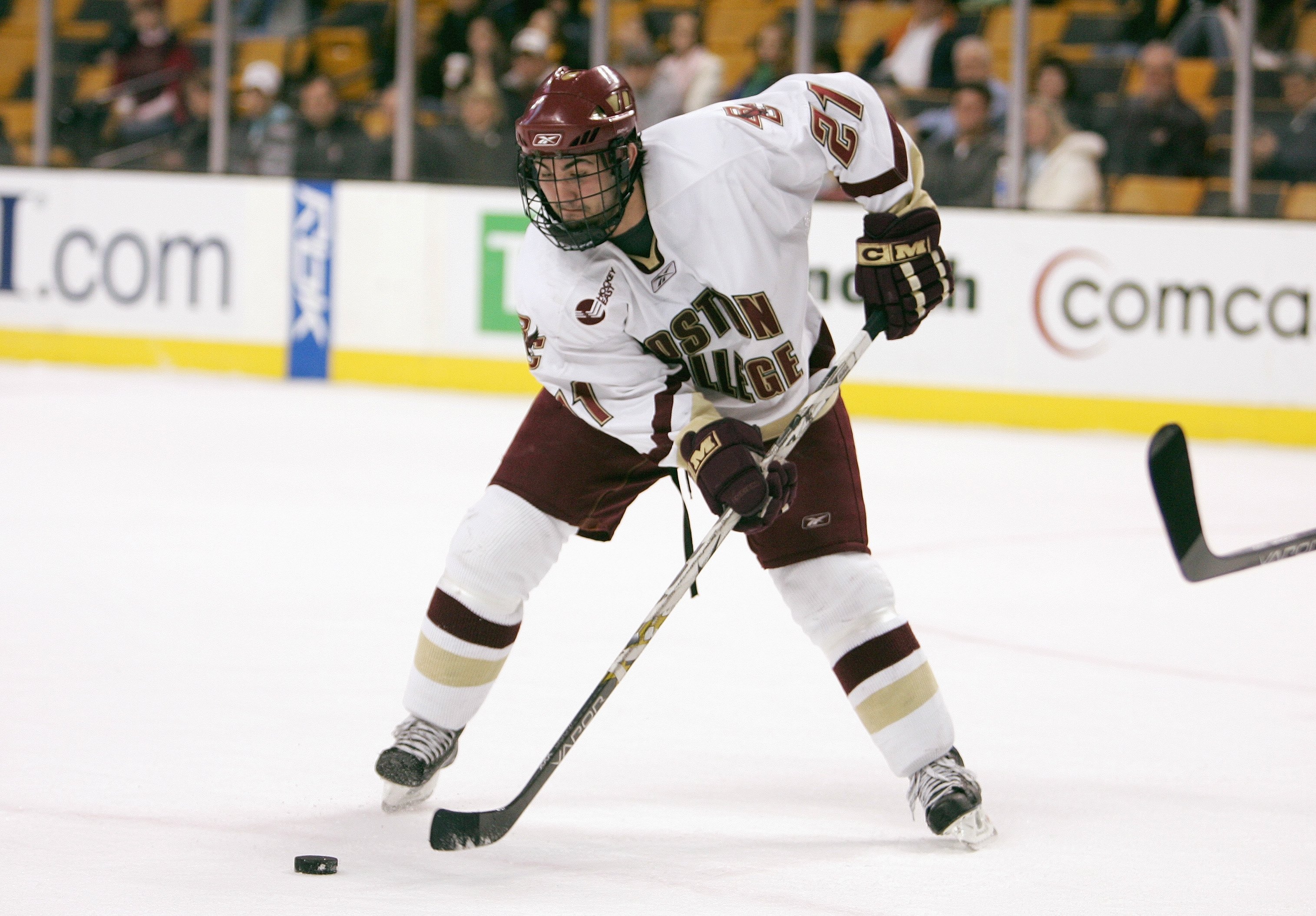 After graduating from Boston College, Benn Ferriero joined the Sharks after the Phoenix Coyotes, who originally drafted him in 2006, did not sign him to a professional contract.

He has no hard feelings about being left to dry by the Desert Dogs, but admits it was nice to beat them when the Coyotes visited this year.

Ferriero felt prepared to play NHL hockey out of college.However, he had to adjust to playing an 80-game season. "It doesn’t seem like too much of a difference until you actually go through and only play 40 games and the next year you have to play 80-100 games," he says.

He is one of the only Sharks never to play junior hockey. Instead of playing in the Eastern Junior Hockey League (EJHL) or United States Hockey League (USHL), Ferriero joined the Boston College Eagles after four years at Governor Gummer Academy in Massachusetts.

"I went to prep school and I played in a lot of the festivals and things growing up, so I played against most of the same guys from high school going into college," he says, regarding his decision to eschew junior hockey. "[It] wasn’t too big of an adjustment going straight from high school to college."

Ferriero is currently splitting time between San Jose and Worcester. He has had 14 points in 56 NHL games over the last two years.

Like Ferriero, Justin Braun joins the Sharks after a four-year collegiate career.

The Vadnais Heights, MN native went East to play hockey at UMass after stints at White Bear High School and in the USHL with the Green Bay Gamblers.

"It was a good experience," Braun says of his time in Wisconsin. "[It is the] best feeder system for college players, so it got me ready for the next step."

He feels collegiate hockey is a unique experience that encourages camaraderie among players.

"[The] biggest [things] in college [are] the short season [and] team pride," says Braun, who graduated with an economics degree. "Every game is make or break your season so yeah, it was a great experience."

His first goal came against the Ottawa Senators in Dany Heatley's return to Canada's capital.

"It was just [a game that] was fun to be a part of," he recalls. "Fans were nuts. Guys were fired up, ready to go. Everyone, top to bottom, played well, and that’s what you expect in those big games."

He is currently receiving more ice time after the departure of Derek Joslin (Carolina). He uses a conservative approach to the game when he gets called up.

"You want to do well, make a difference, you don’t want to be out there just cruising around, but at the same time you have to be more conservative up here than in the AHL just because of guys’ speed," he says. "You’ve got to pick your spots, it’s a balancing act." 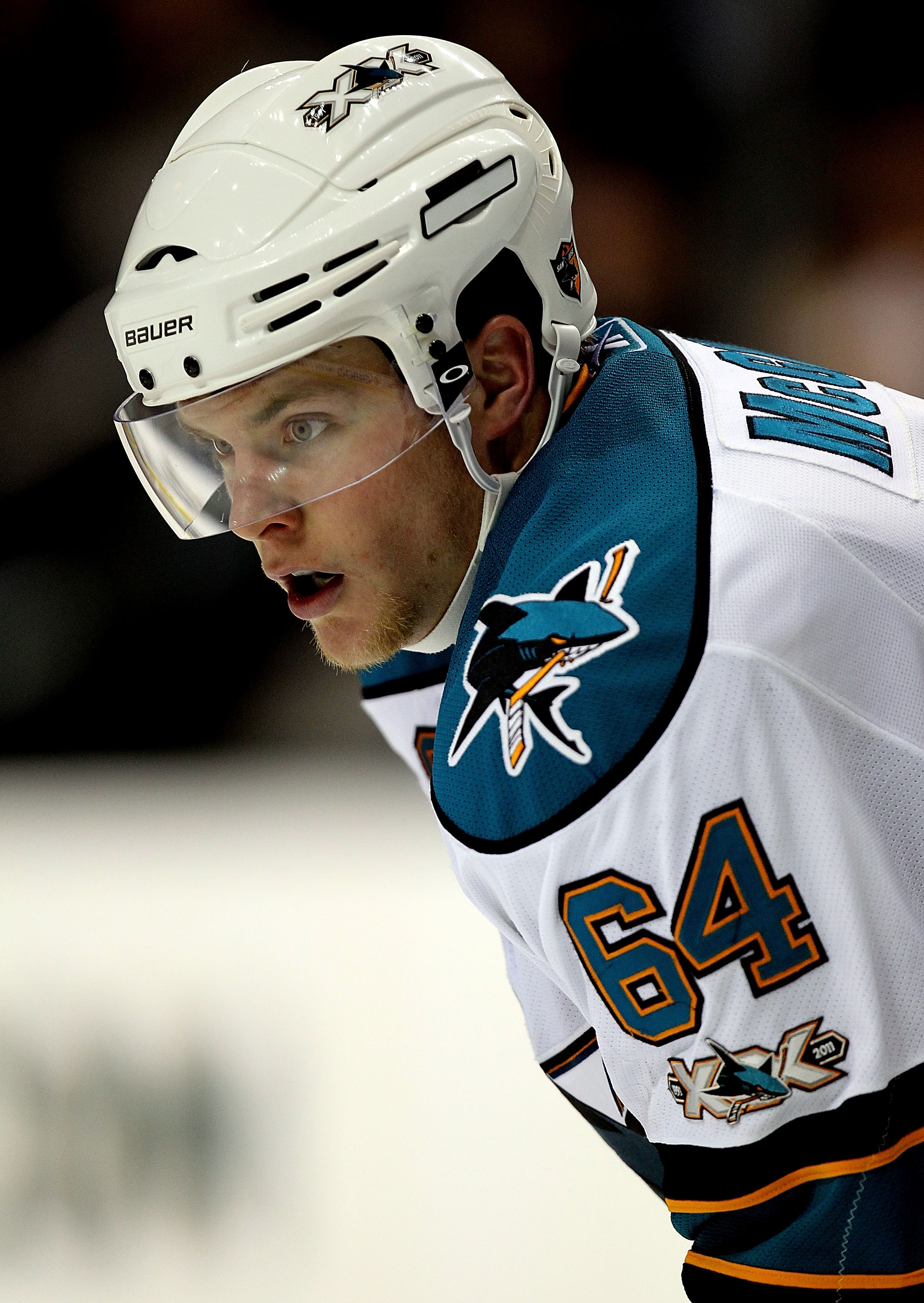 Teamed up with Logan Couture with the Ottawa 67's of the Ontario Hockey League (OHL), Jamie McGinn had a strong showing last year with 10 goals in 59 games.

However, sophomore season has been trying for the forward. He only has one goal in 49 games this season.

He says that he had instant chemistry with Couture since the day they met.

"Hockey’s a funny thing where you might not know the guy your whole life, but you spend a week with that person in the dressing room...and you can become best friends right away," says McGinn. "That’s what the locker room did for us."

McGinn says his relationship with Couture has helped him at the NHL level.

"He’s having a great year, but he thinks he’s struggling because he hasn’t scored in a while," he says, shaking his head. "I kind of joke with him saying, ‘Look what’s going on with me.’" 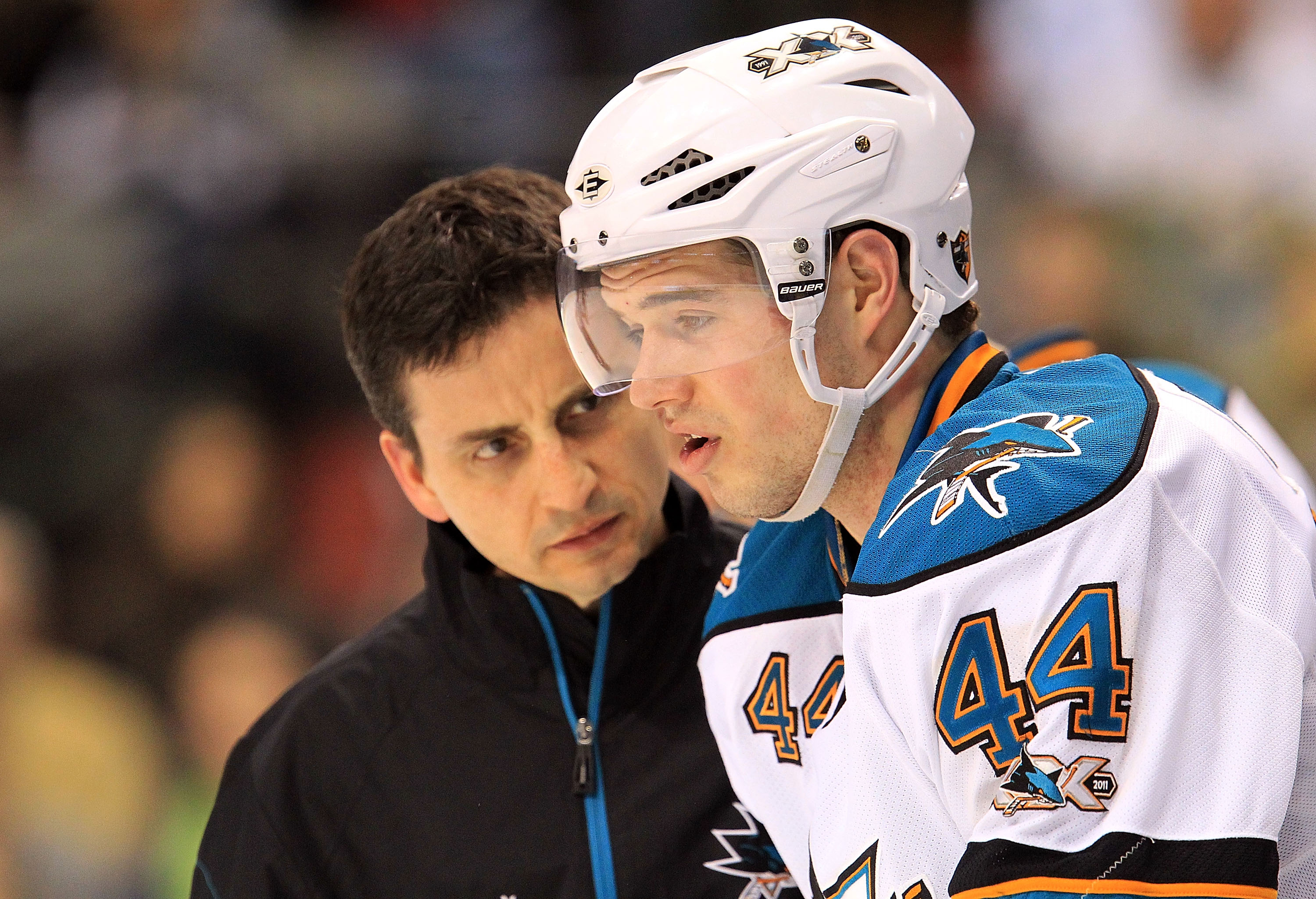 "I wanted the quickest way to get to the NHL," says Vlasic, who has only played one minor league game in his five-year career. "It worked out for me. It doesn’t work out for everybody. You’ve got to be sure of your decision. I was. I wanted to play."

Vlasic was coached by Guy Boucher in AAA Midget hockey, which is played before juniors. He feels that Boucher, the head coach behind the turnaround in Tampa Bay, helped him prepare for the next level and turned him into the player he his today.

"The mind he’s got to create stuff, I mean, if you look at their game nobody else plays they way they do," Vlasic says in reference to the Lightning's style of play. "They’ve got five guys all down low in one corner. Powerplay, penalty kill, he creates so much that nobody could think of creating. He’s got a great mind."

In junior he played for the Quebec Remparts, a team coached, owned and managed by former Canadiens and Avalanche goaltending legend Patrick Roy.

"He taught me how to play defensively," he says of Roy. "Being a goalie, he knows how defensemen play in the NHL."

Great coaching and hard work has allowed Vlasic to prosper in the NHL, where he has been coached by Ron Wilson and Todd McLellan in San Jose.

After spending a year traveling between Worcester and San Jose, soft-spoken Logan Couture has become the darling of the San Jose Sharks.

"You could tell he was pretty good right away," says Jamie McGinn, Couture's teammate in junior hockey. "Believe it or not, he’s a pretty quiet kid. Unless you knew him pretty well he didn’t say too many words, he just proved himself on the ice."

A serious contender for the Calder Trophy, Couture continued to produce regardless of what was going around him. For the first half of the season he led the team in goals.

Couture credits teammate Ryane Clowe for his development as a player.

"[He’s] been unbelievable, he’s really one of the most underrated passers in the NHL," he says of Clowe. "He protects pucks well, has a big body and he’s been a lot of fun to play with."

"We’ve had good chemistry," says Clowe of his rookie teammate. "Logan came up last year, played a few games, but played mostly in the playoffs and I think that gave him a lot of confidence coming into this year. He played last year in the playoffs, played well, contributed and he’s a very good, reliable player on both ends of the ice."

Couture is on pace to score 30 goals this season; however, has recently been sidelined with injury. His play indicates that he has a great future in San Jose. 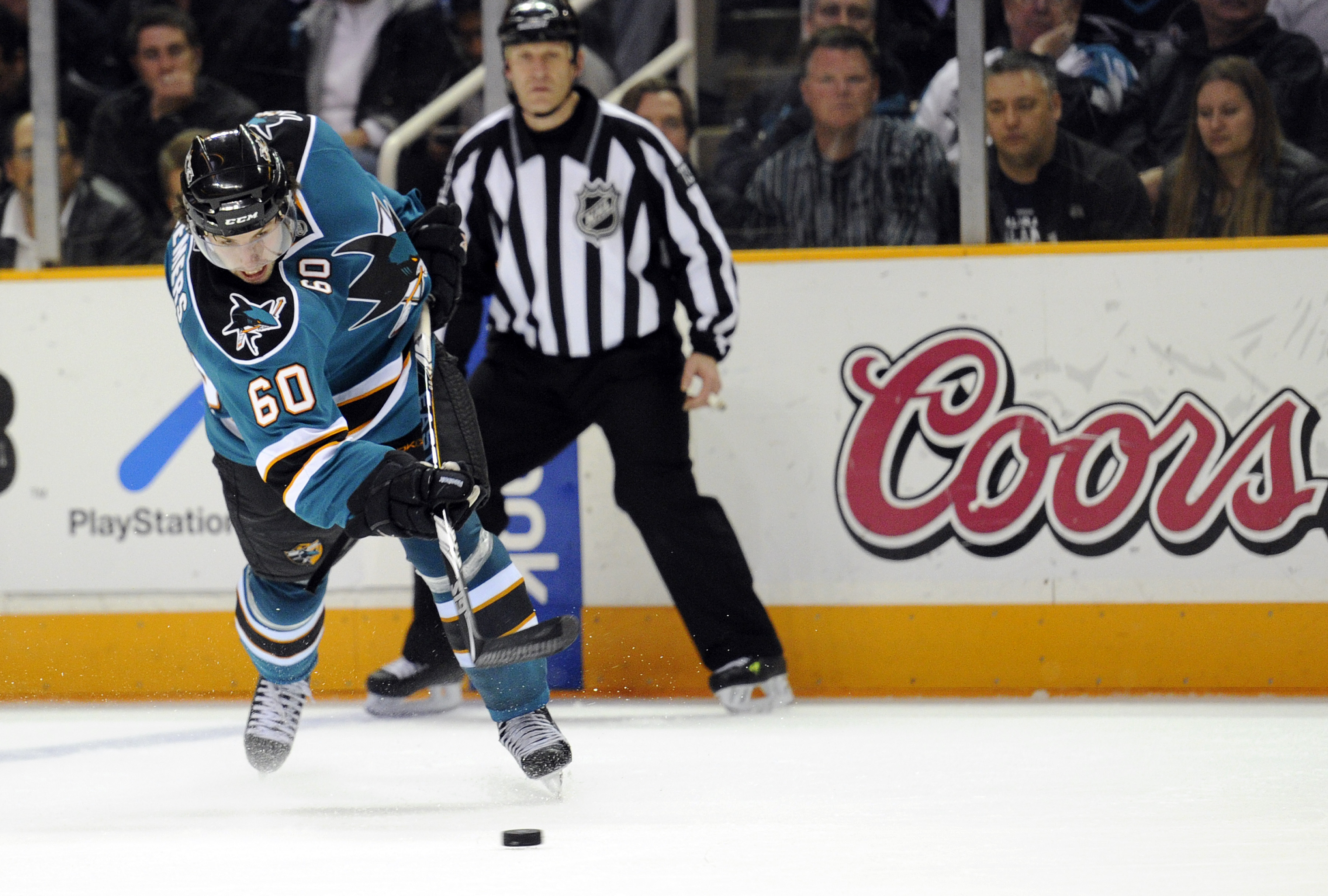 Jason Demers was told he was not strong enough to play in the NHL.

For two years he was passed over on draft day.

In youth hockey, other parents said that the only reason he got playing time was because his father coached the team.

Last year he traveled between Northern California and Worcester, MA, where the Sharks’ minor league team is located, chasing a childhood dream.

His story is an incredible narrative of a man who's self-motivation carried him to the height of his possession. Demers tuned out the naysayers and continued to improve at each level.

He spends every minute on the ice to prove everyone wrong. He uses every stride, every slap shot and every hit to show he belongs in the world's most competitive hockey league.

A single slide does not do his story justice. It can be found in its entirety here:

It is a must-read.