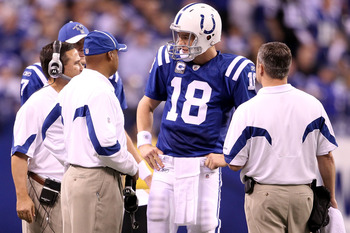 The Indianapolis Colts had a disappointing year based on their standards, finishing 10-6 and losing in the first round of the playoffs to the New York Jets.

Heading into this season the Colts re-signed their leader in Peyton Manning, tried to fix their offensive line through the draft and have healthy wide receivers. The Colts are out to prove that despite having a subpar year last season, they are still one of the better teams in the league.

Nobody is sure what this season has in store, but here are five bold predictions for the 2011 Indianapolis Colts' season.

The Colts had a horrible offensive line last season and haven't had a 1,000-yard rusher since 2007

The Colts have fixed up their offensive line through the draft by selecting Anthony Castonzo and Benjamin Ijalana. The passing by Peyton Manning is going to have more defenders dropping back to play the pass. That should be able to open up the running game.

Besides, how many years can the Colts be horrible at running the ball?

Peyton Manning Will Throw for 5,000 Yards

Last season, Manning threw the ball more than any other season with a ridiculous 679 pass attempts. So of course he had the most passing yards of his career with 4,700. Last season, almost every receiver on the team was hurt at some point. This year they are healthy and ready to go.

Also, if the first prediction does come true and the running game is more successful, that will only help open the passing game.

Manning got his huge contract; now he is out to prove that he hasn't lost a step. Adding another huge accomplishment to his Hall of Fame resume will silence all the critics.

Pierre Garcon Will Have at Least 1,000 Receiving Yards

Pierre Garcon has had two seasons of fewer than 800 yards. An extra 200-plus yards would be a big step in his young career.

Garcon is one of the best young receivers in the league that nobody really knows about. He may be the No. 2 option heading into the season but with Reggie Wayne looking like he's lost a step, it's only a matter of time before that changes.

He caught 20 more balls than he did last season and you can expect that number to increase this year. This could be the season where Garcon makes a household name for himself.

Dwight Freeney Will Have at Least 11 Sacks

He is getting up there in age and has had injury problems the last couple of seasons.

Ever since 2002 when Dwight Freeney came into the league, nobody has had more sacks than him. In his nine-year career, there have only been two seasons in which he hasn't had double-digit sacks.

His spin move is the best in the league and bull rush isn't bad either, and when he is healthy, he is one of the best defensive ends in the entire NFL. You have to go with history here and expect Freeney to get at least 11 sacks, one more than last season.

The Colts Will Defeat the Steelers in Week 3

The Colts have only won three of the last 17 meetings against the Pittsburgh Steelers.

The last time these two teams met in 2008, the Colts won a 24-20 thriller. But unfortunately, the Colts haven't had much success against the Black and Yellow.

The Colts should be able to win in Week 3 because they will be on a mission this season and will be out to prove they are still a dominating force in this league. Last year the Colts finished 10-6, the first time they lost more than four games since 2002.

Peyton Manning threw 17 interceptions, which was the most since 2002 as well. He will also be out to prove he is fine with his neck injury and that he is worth that huge contract he just received during the offseason. What better way to do so than against the AFC champions with everybody watching on Sunday night?

The game is also in Lucas Oil Stadium, which doesn't hurt either.

Other Bold Predictions You May Enjoy