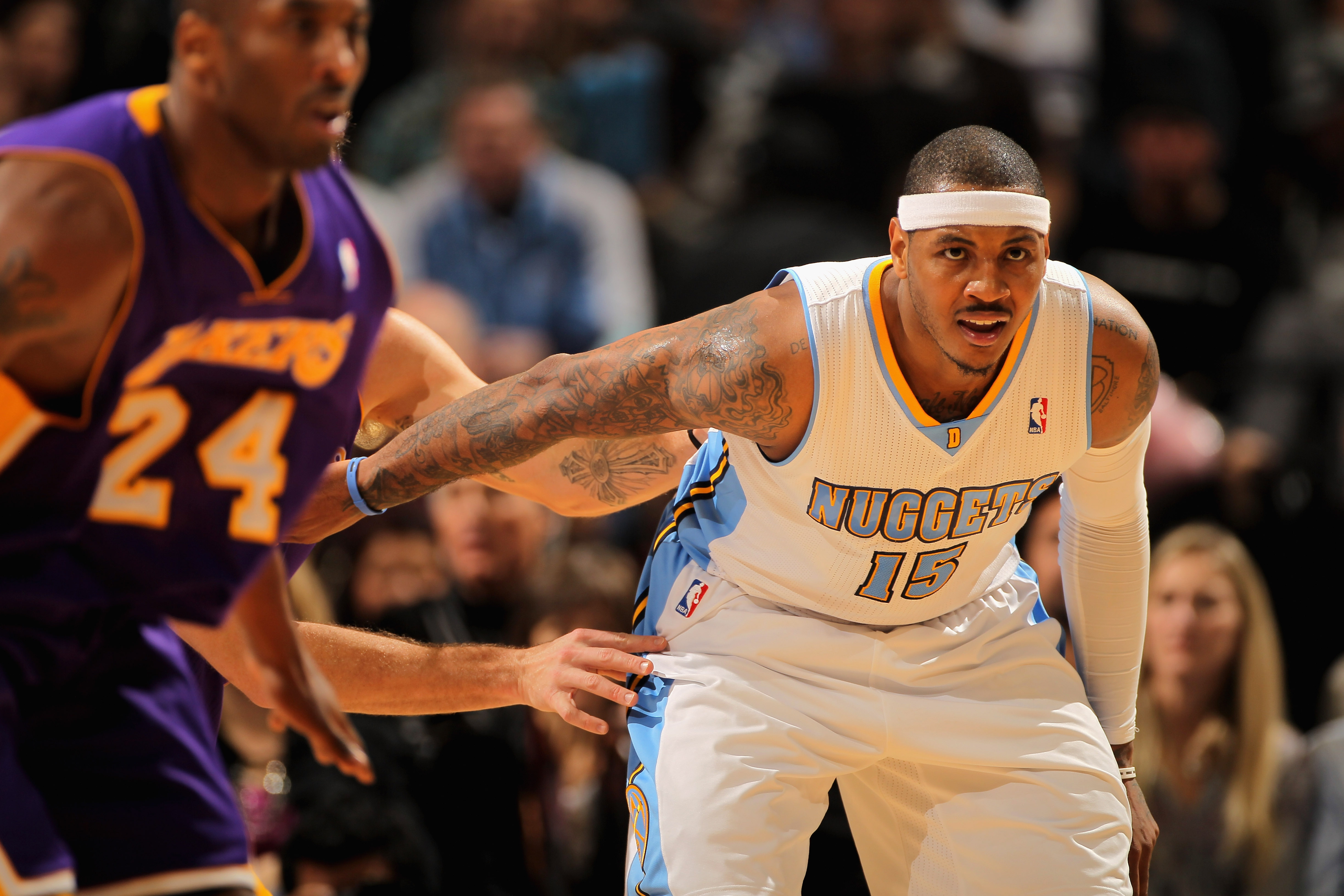 Just when you think the New York Knicks and Denver Nuggets are finally getting somewhere to end this potential Carmelo Anthony trade saga that is quickly becoming a soap opera, the Los Angeles Lakers fly in and create more drama.

Last week, the news broke that Ron Artest wanted to leave L.A., and he naturally refuted the reports.

The Lakers' reported desire for "youth" was brought on by themselves, but their financial situation will make it tough to deal before the deadline.

Now, with the Knicks reportedly working on a deal, rumors circulate that the Lakers are potentially willing to part ways with center Andrew Bynum and have discussed a potential trade with the Nuggets for Anthony that would work financially.

The Lakers may truly want to make such a move and so may the Nuggets, or Denver may be trying to drive up the price on the Knicks.

The question now is, would the Lakers would become the front-runner for the title with Carmelo Anthony in Los Angeles? 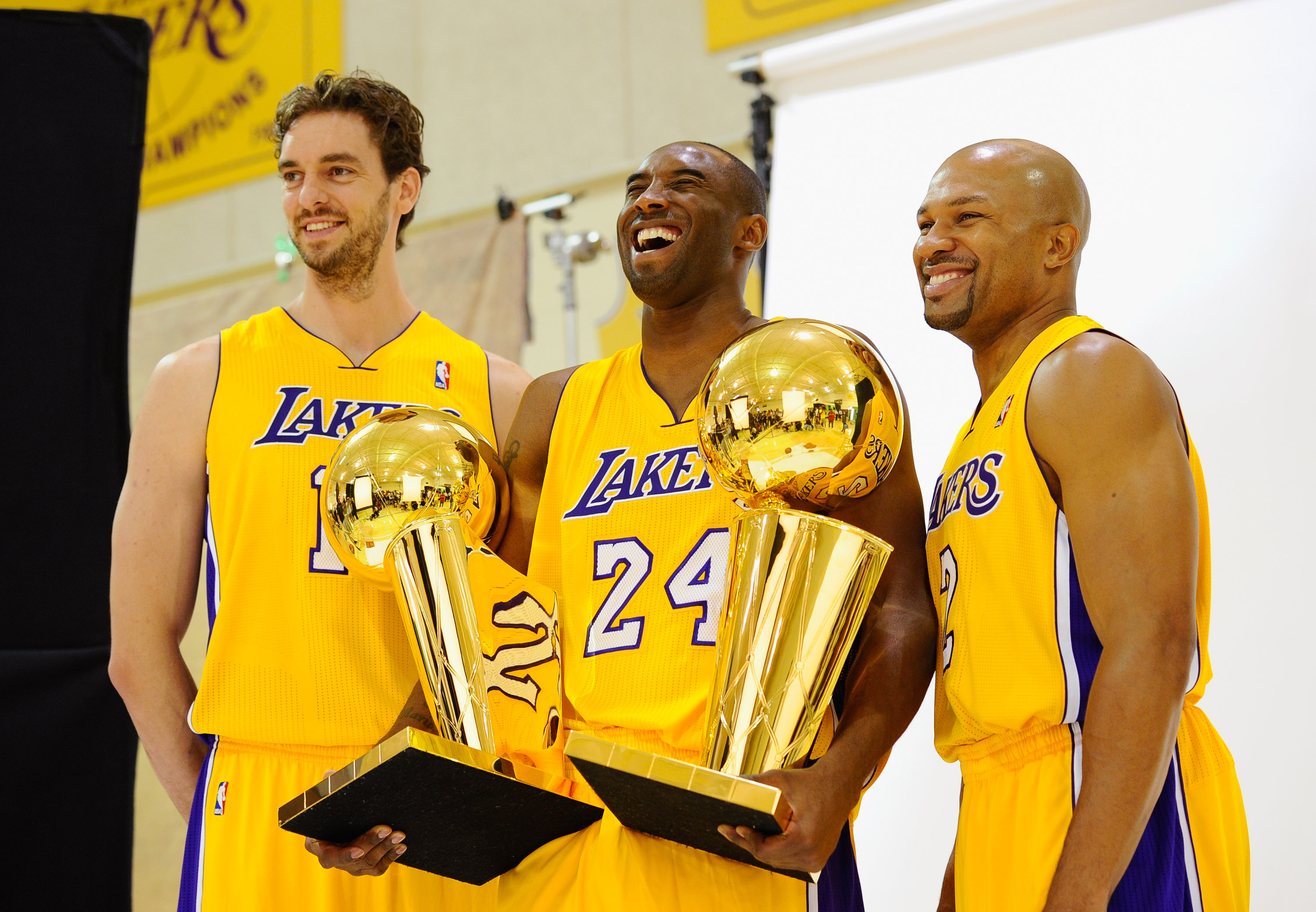 The Lakers would become virtually unguardable with Anthony as a swingman for them.

Kobe Bryant, Pau Gasol, Lamar Odom and Carmelo Anthony would be the best offensive force in the league.

The mere fact that four of their five starters are a threat to score at almost any time would make the Lakers a ridiculous offensive talent.

The offensive mismatches with the Lakers' size at the forward position would absolutely dominate smaller teams.

No: Defense and Depth 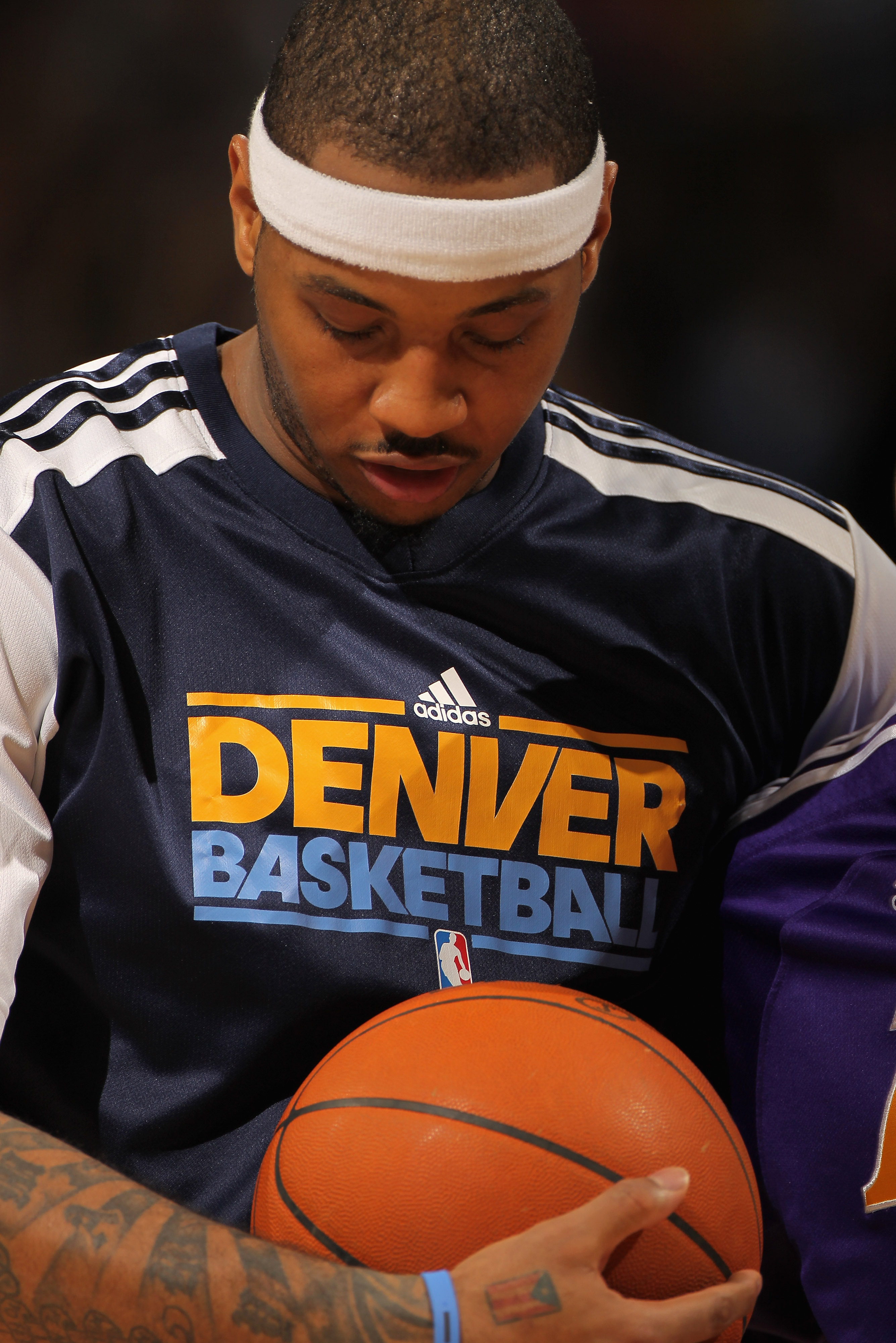 The Lakers are proud of their defensive prowess, and unfortunately, Carmelo Anthony does not help very much on that end.

He is not much of a defensive force and trading Bynum would likely leave them thin in the frontcourt.

With Anthony, it would likely be Gasol at the 5, Odom at the 4, Melo at the 3, Kobe at the 2 and Fisher at the point.

The Lakers would lack depth in the frontcourt with both Odom and Gasol in the lineup and it would force Ron Artest out of the starting lineup.

The only other big man who has seen time in over 30 games so far this season is Derrick Caracter, who averages 5.7 minutes and 2.3 points per game—a concern if there are any injuries to the starting bigs. 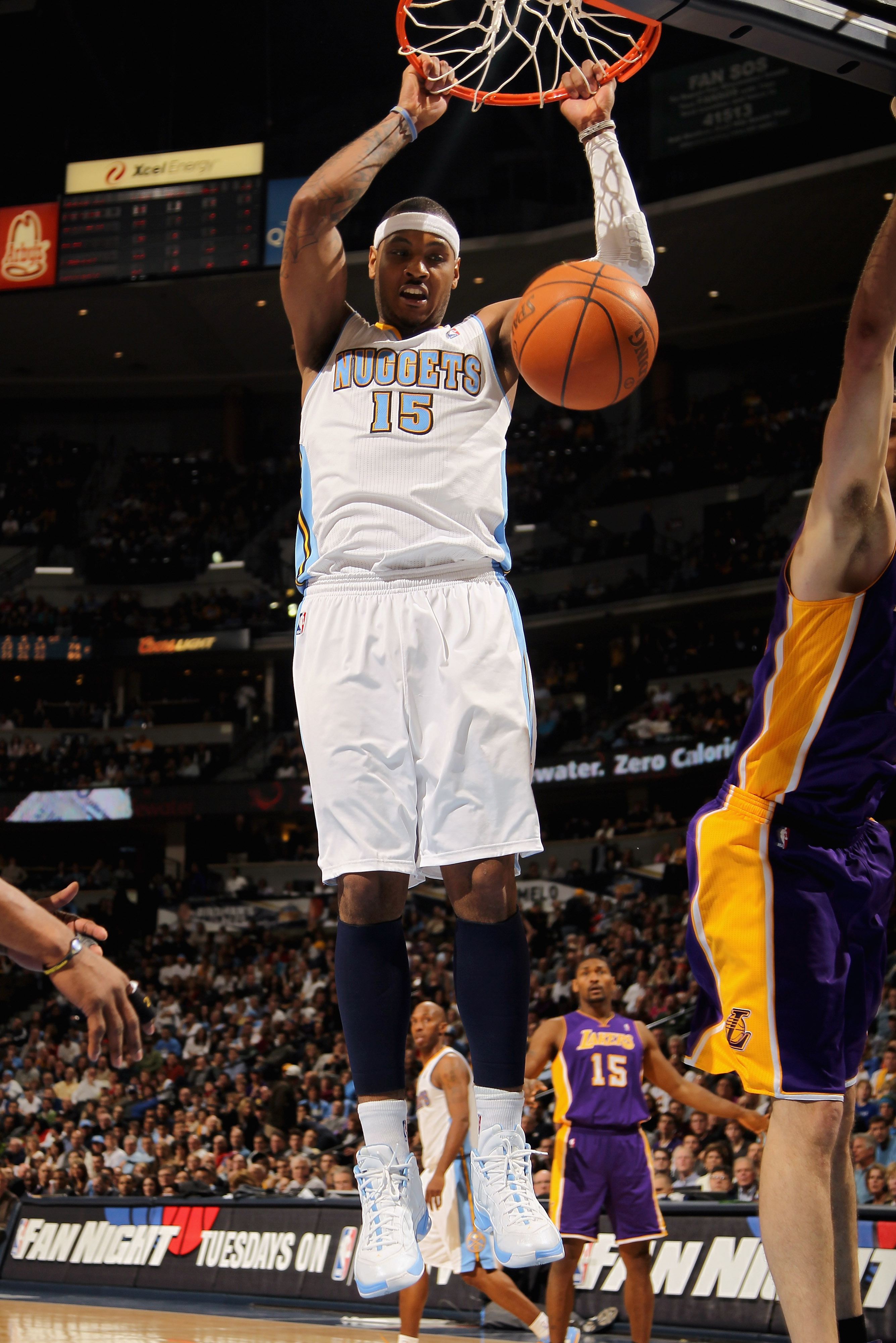 Some have said that the Lakers need a youthful spark to reignite their fire for another title run, and Anthony would bring exactly that.

The superstar forward is only 26 years old and chasing his first NBA title.

He has done a lot of good in Denver and has been the focus of their team since the day he was drafted.

Carmelo does have the talent and ability to elevate a team, and he could be a powerful threat with all the other weapons on the Lakers. 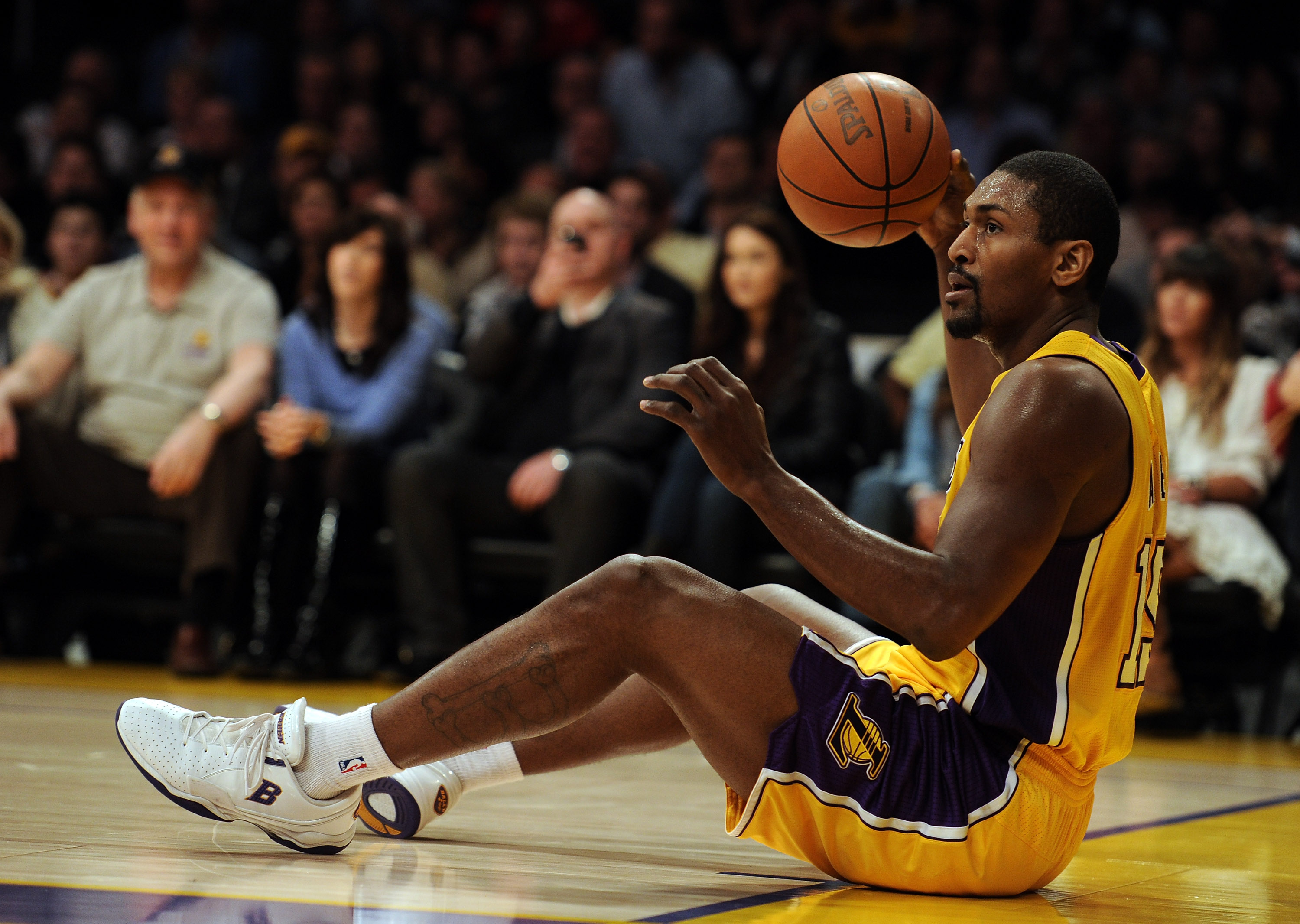 The Nuggets reportedly have no interest in Ron Artest, and Melo's presence would likely force him out of the starting lineup.

The season has already been a disappointment for Artest, and there is a small chance he'll be happy about coming off the bench and taking an even smaller role in the offense.

As the Heat have found out so far this season, even uber-talented players take time to gel together.

The Lakers' offense is run a certain way, and it would take a lot of time for Melo to be integrated effectively into how things are done.

He is a creative scoring threat who can do virtually everything on offense but would become the second option to Kobe in L.A.

He will also see fewer touches with the ability of Gasol to work things in the paint.

Conclusion: Not Worth It 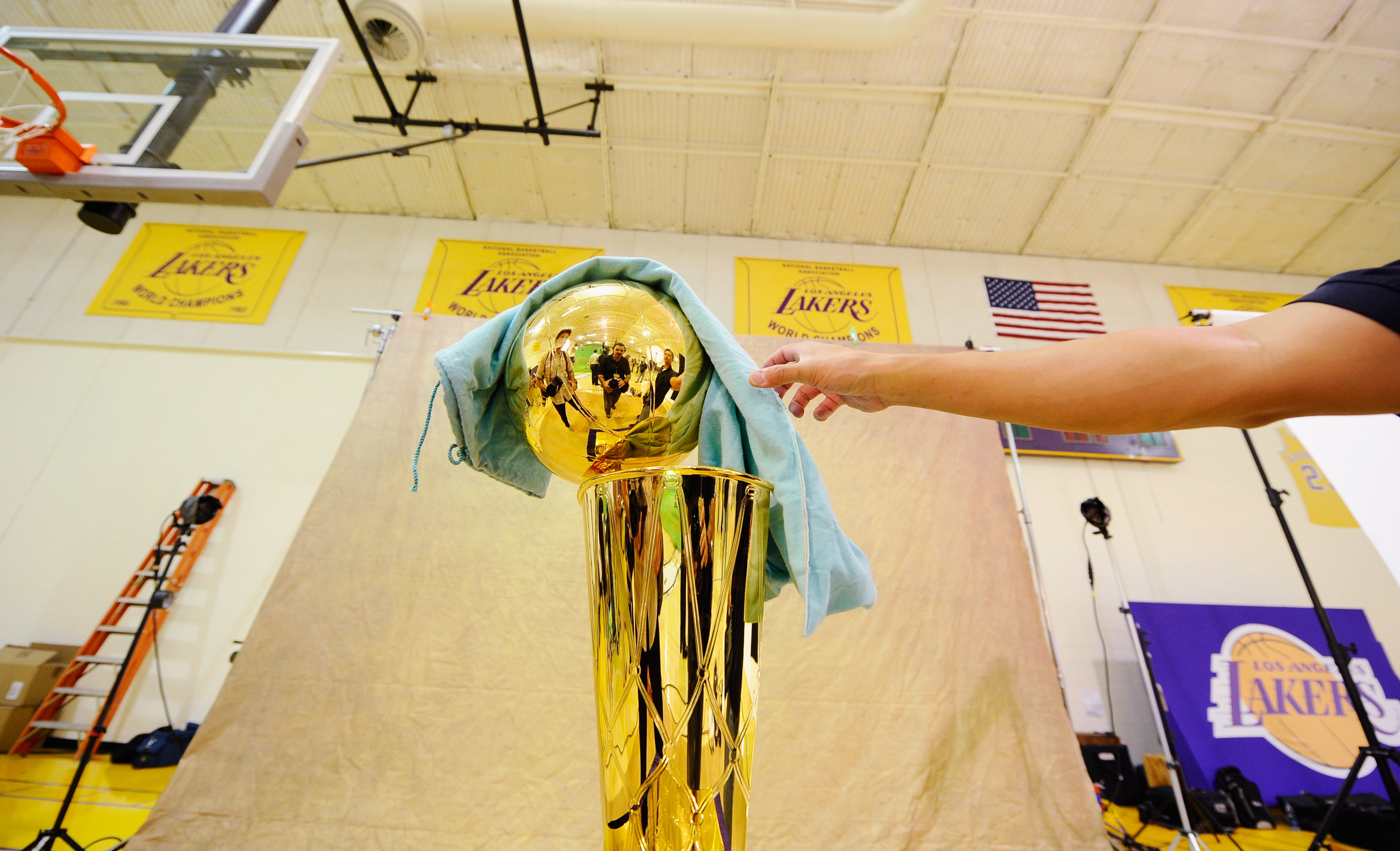 The Lakers are the two-time defending NBA champs for a reason and while the media likes to panic after every loss and the words coming out of L.A.'s front office are unusual, Phil Jackson and Kobe are still the leaders of this team.

Adding Carmelo may look like a dominant offensive force but it does not make them invincible or even unstoppable for that matter.

His deficiencies on the defensive end could hurt the Lakers, the time it takes to click will certainly hurt the Lakers, and the lack of depth in the frontcourt could cripple their chances at a third straight title if anything happened to Gasol or Odom.

The Lakers are a better team with Bynum at center when he is healthy; in fact, he is the franchise's future if he can stay healthy.

Carmelo Anthony would be a really nice fit, but giving up Bynum to get him does not make the Lakers the NBA champions this season.