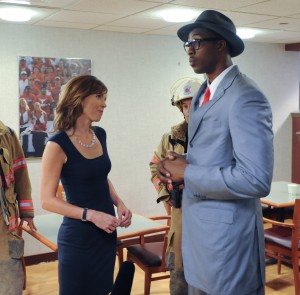 I have a confession to make.

I have a guilty pleasure. I love the "This is SportsCenter" and NBA on ESPN commercials. Between the comedy, the self-deprecation, and the athletes having fun, it all works.

It's to the point now that you know you've hit stardom when you get your own TISC commercial. So here they are, in an order that can only be described as personal preference on funniness factor, my top ten TISC commercials featuring NBA players.

In reference to his "Superman" persona, Dwight Howard is dressed in the altar ego, Clark Kent. Something about the idea of Dwight Howard being nerdy just cracks me up.

3. Bill Bradley: Is He Qualified

You can't help but get a chuckle out of both Keith Olbermann and Bill Bradley taking a humorous jab at the Democratic party. Olbermann is ready to make a big announcement for his next big job.

Could he be coming back to Sportscenter?

You'd think winning Rookie of the Year would get you a little credit. Guess not.

Not to overstate it, but GROSS! I wouldn't have any socks either!

6. The King Has No Throne

I actually think that LeBron can be pretty funny.

Did you catch his, "I have a Super Bowl party to go to" line yesterday.

When you're 7' 2" and 380 pounds you probably get to make whatever rules you want.

Love the way Garnett is choking back the tears here. Can anyone not watch Hoosiers and tear up at the end?

I love that movie.

Can you believe he used to be a rookie?

Wow! He looks so young.

This one just cracks me up.

What do you even have that button for?

And yeah, it's OK to accuse me of homerism on this one.