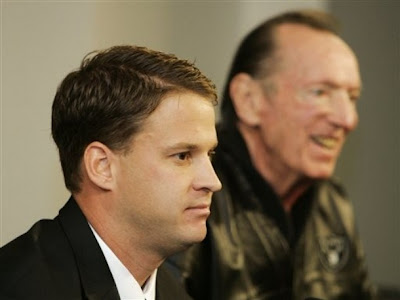 There was a time when Al Davis knew what he was doing and was good at it. I have no problem giving credit where credit is due; he was inducted into the Hall of Fame in 1992 for his past contributions.

Davis compiled a 23-16-8 record in his three years as head coach, prior to becoming the AFL commissioner in 1966. Once named AFL Commissioner, Al Davis led some aggressive campaigns against the NFL. He went at them hard and signed several of their top players to AFL contracts.

Several other AFL owners held silent meetings with the NFL discussing a merger of the two football leagues; they announced plans that they were merging with the NFL.

Due to the compensation that AFL teams had to pay to the NFL, because he felt that the AFL would be the superior league if allowed to remain separate, Al Davis was staunchly against the merger.

He then decided to return to the Raiders as the general partner and head of football operations, along with seven other co-owners, instead of remain as commissioner until the AFL ended in 1970. In other words, he returned to take over.

He ruthlessly began his plight to become the don, or better yet, take complete control of the organization.

The same man who demands loyalty from all of his coaches decided to make his power play and oust managing general partner F. Wayne Valley in 1972, while he was attending the Summer Olympics in Munich.

He decided to revise the partnership agreement that gave him near total-control of team operations. F. Wayne Valley returned home after dealing with the shock of the tragic events of the Olympics, just to find out what had happened.

He tried to sue Al Davis to overturn the revised agreement, but it was too late; he no longer had a voice.

F. Wayne Valley sold his interest in 1976, and no other partner has had a role in running the team since. Keep in mind that Davis didn’t officially acquire majority interest in the team until 2005, when he bought the shares held by the family of Ed McGah, the team’s last original general partner.

It sounds like fear and intimidation played a huge factor in the interim. He currently owns 67 percent of the interests in the partnership, through his company, A. D. Football, Inc. In other words, he has been a team owner and general manager since 1970. This informs those who don’t know how we reached this point.

Call him a "control freak" and you wouldn’t be off the mark. Call him someone who doesn’t like change, and you would be wrong. While we’re on the subject of being wrong, it is dead wrong for the team to be in the state they’re in right now and the state that they’ve been in since 2001.

The NFL is a business of which the Oakland Raiders are a part of. Any business that has a few bad months or a bad quarter is holding several meetings/discussions to figure out what the company is doing wrong and what needs to happen to change it.

Any business that has been as terrible and unproductive as the Raiders have been over the last five years would no longer be in business.

Albert Einstein said it best when he said, and I quote, “Insanity: doing the same thing over and over again and expecting different results”.

As a fan of this team, I’ve seen this on more than one occasion. It is ridiculous. I’ve never seen failure at every level until I watch my team.
I’ll focus on the NFL draft for one. Let’s look at the 2003 draft, after Al traded Head Coach Jon Gruden for draft picks. Let's look at how those picks were used.

10 picks in the draft, five selections in the first 100 picks, and the Raiders have two starters, three still on the roster, and six that are no longer in the league.

I like CB Nnamdi Asomugha, but I can’t understand how a team with two first-round picks can pass on WR Anquan Boldin and DE Osi Umenyiora in favor of DE Tyler Brayton.

In the second round, in need of a TE and OLB, the team passed on TE Jason Witten and OLB Lance Briggs in favor of TE Teyo Johnson.
Lane Kiffin and staff need to remain in place to develop the young players and come together as a unit. The Raiders need to rebuild the team the right way and build through the draft, finally.
This is the only sane way to bring the team back to being competitive every game and every season.
Fire Lane Kiffin and it will set the franchise back for at least the next three to five years. Al needs to do the right thing and stop meddling with the team. We all know who the boss is, but the real question is: Does Al Davis care about the team's fans?
I have a strong love for the Raiders and have been a fan since the AFL days. I'm highly upset that my team has turned into an NFL punch line. I've got a lot of love for Al Davis, but for several years now, he has failed to lead the team in the right direction. It is time to turn the controls over to someone else.
Hey Al, the '70s and '80s called, they want their team back.